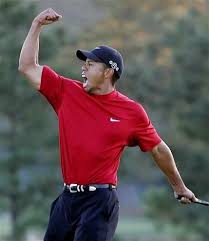 To this humble media reporter, he is more frightening than Armageddon, Three Mile Island and a Rosie O’Donnell Playboy centerfold rolled into one.

I speak of one Eldrick “Tiger” Woods. Since his coming out party in 1997, the erstwhile golf phenom has wreaked havoc on professional golf’s record books. He has turned this still somewhat stodgy sport on its ear, and carved out a professional, social and almost-mythical divot in golf’s fairway.

Glenn Ordway, host of Sportsradio WEEI’s Big Show, coined the phrase “binky.”  A binky is a media darling. Ordway’s binky used to be ex-Celtic Antoine Walker. WEEI’s Pete Sheppard has Tom Brady. In the eyes of these commentators, their binky can do no wrong.

Tiger Woods is my big beautiful binky. I absolutely love the guy, and what’s not to love?  Woods has rejuvenated a game that was slowly slipping into oblivion. The PGA Tour was an unappealing mish-mash of wannabes and never-were’s until Tiger turned each tournament into a happening

With the possible exceptions of the sublime Payne Stewart, the brooding David Duval and a scant few others, the PGA had no identity until Le Tigre came to town and became a consistent winner. The Tour B.T. (Before Tiger) was living off the fumes of Jack Nicklaus’s plaid pants and Chi Chi Rodriguez’s sword swinging until Woods constructed a career that will no doubt end as the greatest of all-time.

I am proud to be kneeling at the spikes of greatness, paying homage to a rose-shirted, Nike-capped hero. I am an unabashed Tiger Toady. Yes, Tiger uncharacteristically floundered at the end of this year’s Masters, but so what? Would you take any of the guys who finished ahead of him? Angel Cabrera? Love the hacker’s swing, but please, no mas! Kenny Perry? Nice try, but these days, he means to golf what Steve Perry means to Journey. Chad Campbell? He might as well be Burt Campbell, i.e. – invisible.

As a Woods apple-polisher, I have a set of specific beliefs. Call them Tiger Tenets. I believe in furry black and orange head covers with eyes. I believe in General Motors, Titleist, General Mills, American Express, Accenture, TAG Heuer, Gillette and any other product that Tiger has or will endorse.

I believe in having the greatest swing this side of Ted Williams, trashing that swing, and creating a new swing that is the greatest this side of Ted Williams. I believe in the wisdom of the father being passed on to the son. I love Tiger so much; I’ve had my late dad’s name posthumously changed to Earl. I am still working on having my late mom’s ethnicity posthumously changed to Thai.

I believe in the Stanford Cardinal, the Buick Skylark, eagles and other assorted birdies.

I believe in all the Majors: the Masters, the U.S. Open, the British Open, the PGA, Major Tom, Major Anthony Nelson, Lee Majors and Major Mudd.

I am a Tiger Toady. I believe in the short game and the long drive, big wins and small details, hot streaks and cold stares.

Lastly, I believe that Phil Mickelson is Satan. He is Charles Manson with a sweet swing, the Son of Sam in a visor, Richard Speck in pleated slacks. Phil Mickelson? Listen, if I want to look at a self-absorbed millionaire whose weight fluctuates like the stock market, I’ll watch Oprah.

Comparing Mickelson to Woods is like comparing George W. Bush to Abraham Lincoln. They both held the same job and are part of the same species, but the similarities end there. Lincoln wrote the Gettysburg Address. Bush needs a GPS to find his own address.

Speaking of Commanders in Chief, we recently elected Barack Obama as president, but we should have drafted Tiger for the job. If Woods were in the White House, Osama Bin Laden would be doing wind sprints and suicides in the rose garden.

If Tiger led us in Vietnam, we’d have been done in time for a 6am tee time. If he were on the Titanic, his heated stare would have melted the damn iceberg. If Tiger were at the Bay of Pigs, Cuba would now be nothing more than one giant cigar shop.

To opponents, Woods is Jack the Ripper and the Boston Strangler, but to me, he is Superman with a private jet and Mother Teresa with a swing coach and personal masseuse.

I’ll caddy for Woods across the board: clubs, towels, tees, golf balls, beer, peanuts his newspaper and slippers. Put me in rehab. Prescribe some medication. Tiger Woods is back and I have achieved Nirvana. To paraphrase Robert Palmer, “You’re gonna have to face it.  I’m addicted to Woods.”

Syndicated columnist John Molori hosts the “J-Team Radio Show” at AM 980 WCAP, AM 1120 WBNW and jteamradio.com. Email John at MoloriMedia@aol.com.