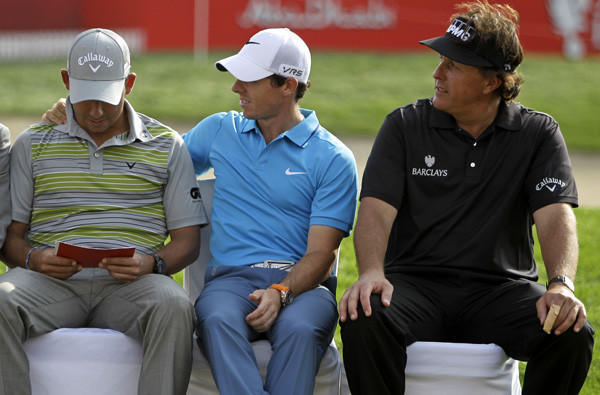 Pablo Larrazabal, 30 year old Spaniard, took the Abu Dhabi HSBC Golf Championship Sunday by one shot over Rory McIlroy and Phil Mickelson but it was the class and sportsmanship the two exhibited, post event, that indicates just how these titans of the fairways value the spirit of the Game.

First, and as you may have read, McIlroy on Saturday took improper relief from a spectator crossing path hitting his shot while his foot was on the border line of the drop area. He started the final day in fourth place instead of second, from where his final-round 68 could have been worthy of a win.

Mickelson caught fire Saturday when he cranked out a course blistering 63. However, after three birdies and no bogeys through his first 12 holes Sunday, the wheels came off at the 13th hole of the  Abu Dhabi GC.

Phil’s ball landed under some shrubs making it impossible for a lefty to make a swing. So he tried to “dribble” it out, as he put it, taking a right-handed swipe. The results were not good. The ball popped up and hit his club to cause a one-stroke penalty putting Mickelson on track to make a triple bogey seven. The penalty and triple bogy ended up being the difference between a win and a second place finish.

Rory said of Pablo Larrazabal‘s win: “Pablo played well, and I can’t take anything away from him. When he needed to, he hit the shots, and the two shots he hit into 18 were straight out of the drawer, so fair play to him.”

Phil remarked of the win: “I give him a lot of credit for finishing the tournament off the right way.”

Both McIlroy and Mickelson were let down by what had befallen them but while Rory, 24 and Phil, 43 may have been raised in different parts of the world at different times, the one thing they have in common is their respect for the true spirit of the Game. To have been congratulatory and proud of the way Larrazabal finished the Championship is the mark of two world class players.  In this writer’s mind, it is this type of  sportsmanship that is at the heart of the game.