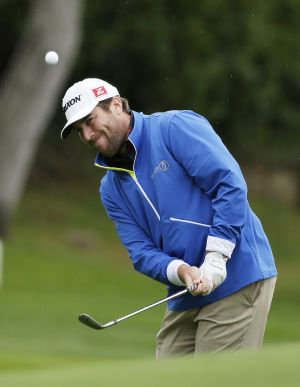 Jim Renner’s T-2nd proves he’s got what it takes plus his team won the Pro-Am event. (AP photo)

Jim Renner tied for second and won the Team event at the rain-soaked and windswept AT&T National Pro-Am Sunday over the Pebble Beach GC  putting to rest any doubt the Plainville, MA resident is right where he belongs; competing on the PGA Tour. It was a $580,800 payday for Renner.

Jim lost his PGA Card after the 2012 season but got it back after finishing among the top 25 on the Web.Com Tour’s money list in 2013. Coming into Pebble Beach, however, Renner had missed the cut in his 4 starts of this 2013-’14 season. That all was about to change for this very talented player.

The opening round of the AT&T Thursday saw Renner post a 65 and tie for the lead with three others. From there on, as the weather on the Monterey Peninsula went downhill, Renner hung in there doing what he seems to do so well when running on all cylinders; grind it out. Both Jim and fellow 2nd place finisher Dustin Johnson closed round 2 with 73’s.  Renner fired a 72 on rain and wind-swept Saturday that included a wind delay.

Sunday saw Team New England’s Renner one of just four players to shoot 67 or better with Dustin Johnson’s 66 the low round of the day. Jim joined Graeme McDowell and Jordan Spieth at 67. That was enough, as it turned out, to put Jim and Dustin Johnson just one back of Walker.

A 6 shot lead having evaporated, Walker strode to the 72nd hole having bogeyed 4 holes on the back side and needing par or better for the win.  A 5 foot putt for par gave Jimmy Walker his third win of the year coming in at -11/276 just a shot ahead of Renner and Johnson.

Renner’s T-2 at -10/277, plus winning the Pro-Am Team portion of the event with partner John Harkey Jr., CEO of Consolidated Restaurant Operations, Inc., should convince anyone that Team New England’s Jim Renner is right where he belongs; competing on the PGA Tour.

Renner is the newest PGA Tour ambassador for the new and wonderfully refreshing shirt company Alial Fital. This company’s golf shirt designs are distinctively unique pieces made in the USA. The company is the brain child of former NFL quarterback Gibran Hamdan.  So, when you see more of TNE’s Jim Renner walking the fairways, check out the distinctive golf shirts by Alial Fital he will be wearing.