Introducing three of the toughest golfers heading for Dubai, who have overcome adversity to play alongside a world-class field of LPGA and LET Champions

Golfing superstars are not usually associated with acts of courage and determination but this year’s OMEGA Dubai Moonlight Classic will feature a line-up of golfers who have played an extraordinary role in terms of setting a sporting example, particularly when it comes to female empowerment.

In what has been a difficult and uncertain year for women’s sport due to the COVID-19 pandemic, this year’s three-day tournament, which will take place from 4-6 November, is the latest event aimed at inspiring the next generation of young girls to set out in pursuit of their dreams and to overcome perceived barriers. The tournament will mark the return of sporting events to Dubai and take place under the appropriately named theme “Time To Shine”.

With the OMEGA Dubai Moonlight Classic’s unique day and night event format taking women’s golf to a whole new frontier, now seems the perfect time to introduce three of the awe-inspiring women heading out to Dubai to compete for the $285,000 prize fund at the iconic Faldo Course at Emirates Golf Club.

The first is Welsh professional Amy Boulden who from a young age was touted as a future superstar of the game. From the age of 13, Boulden had one of the most successful amateur careers in golfing history, winning three Home Internationals, representing Europe in the PING Junior Solheim Cup and being named BBC Wales Young Sportswoman of the Year. Boulden’s breakout potential seemed to be coming together as she turned professional at the age of 21. In her first season in 2014, she won her first tournament at the Association Suisse de Golf Ladies Open and went onto become the LET Rookie of the Year, after she made 12 cuts in 16 tournaments. 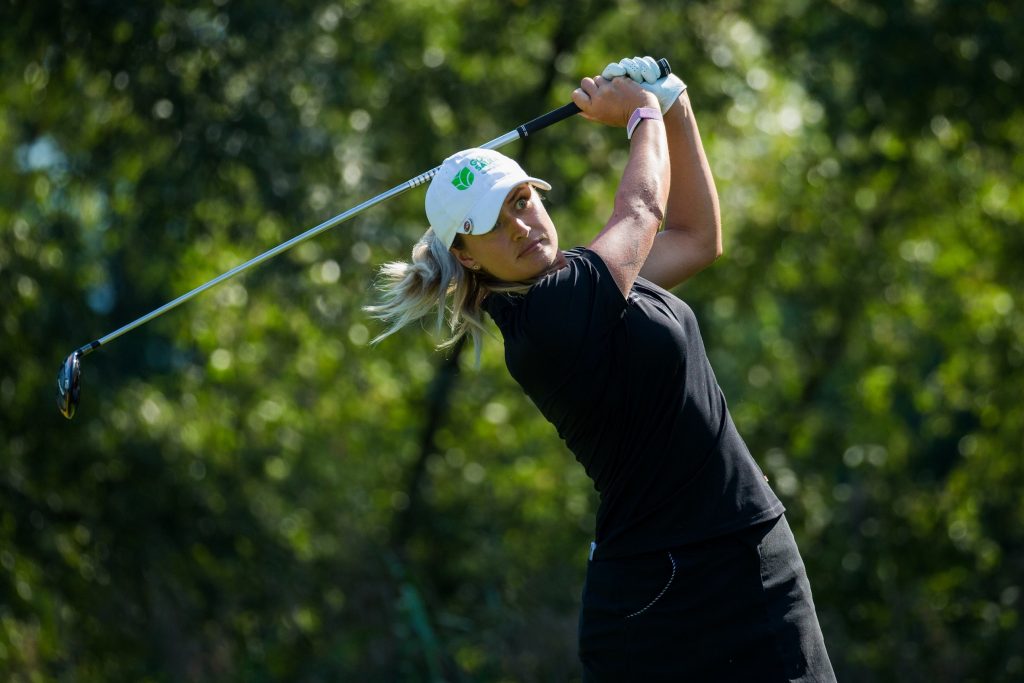 However, as the years progressed a first tournament victory on the Ladies European Tour continued to elude her as well as an unsuccessful attempt to secure playing rights on the LPGA tour. This slump in form resulted in the loss of her tour card in 2019 and it was at this point that Boulden re-evaluated her own place in the game. However, after showing serious resolve, Boulden took an important first step, regaining her place on the 2020 Ladies European Tour with victory at Qualifying School at La Manga Club in Spain, earlier this year in January.

Despite the pandemic and ongoing lockdown, Boulden was not yet done with 2020, as she stormed to victory in the VP Bank Swiss Ladies Open, her Maiden Ladies European Tour Win. Boulden’s victory in Switzerland was reminiscent of the sort of golf that saw Boulden originally first burst onto the scene in 2014 and means she now sits in fifth place on the Race to Costa del Sol European rankings, ahead of next month’s OMEGA Dubai Moonlight Classic.

Commenting on her reversal of fortune in 2020 and the adversity that she has had to overcome Boulden said:
“It’s obviously been a few tough years but since regaining my tour card, I’ve been focused in 2020 on just ensuring at each and every tournament that I put myself in contention, I am really happy with how I’ve handled the pressure so far this year and how I’ve shown killer instinct when I’ve needed to. I’m looking forward to playing in Dubai next month and putting myself in these positions more often, as this is where I want my game to be.”

The second young tough competitor is Diksha Dagar, the youngest Indian woman to win on the distinguished Ladies European Tour when she claimed victory in 2019’s South African Women’s Open aged just 18-years-old. A phenomenal achievement in itself – made all the more incredible with Diksha being born deaf.

Commenting on the similarities between 2020 and facing adversity, Dagar said:

“In such a difficult year as 2020, just being able to play in tournaments such as the OMEGA Dubai Moonlight Classic make me incredibly lucky. To be able to play professional golf is all thanks to my family and the people around me for offering me guidance, support and encouragement. Being born deaf, I never knew what it was like to hear or that I was missing anything. It’s this attitude that has allowed me to turn pro and compete with the attitude that I can play with the best. 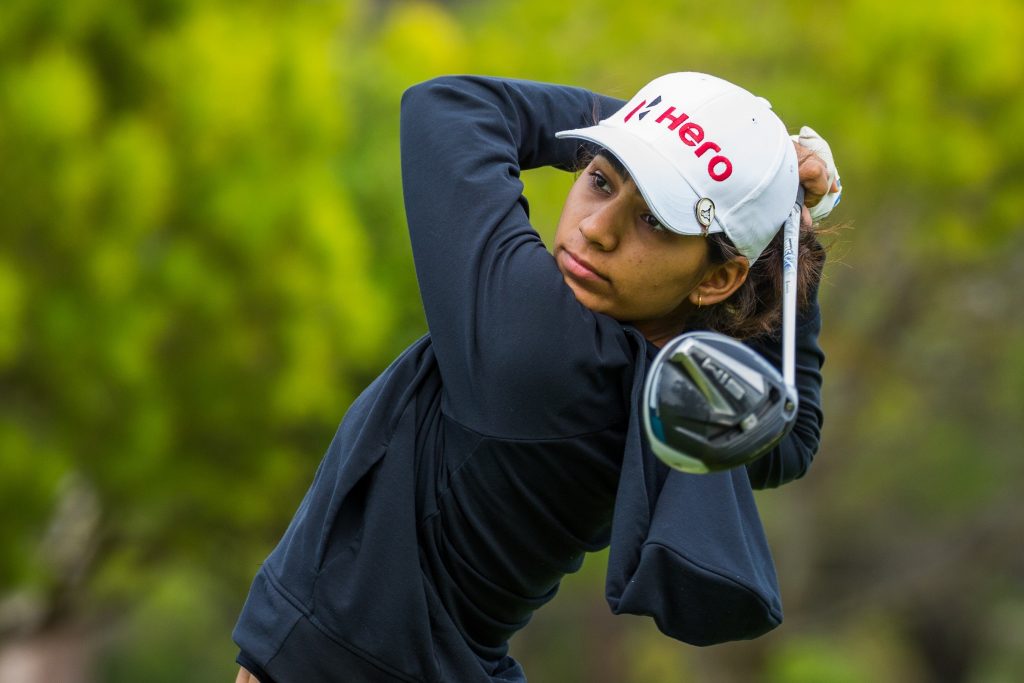 “Golf has been an anchor in my life, bringing me great joy and happiness. To those suffering with their own problems, particularly young girls and women, I recommend accepting your respective situation and learning that whatever the difficulty it is likely to only form a small part of your overall life. It’s important to work hard and take advantage of the chances we’re offered. There is always opportunity in adversity, so use it.

“The fact that the tournament organisers have taken the decision to host this event behind closed doors in Dubai, is testament to our game’s resilience. Even if unable to watch in-person, golf brings excitement and joy to those watching and my goal for the end of this year is to play as well as I possibly can for those stuck at home and perhaps inspire those who thought golf might not be for them.”

Swede Julia Engström, aged just 19-years-old, has had a fantastic 2020, winning her maiden LET golf title with a sensational victory in Australia at the Women’s NSW Open. Engström continued her fine form, quickly following up her first victory with a second at the Lacoste Ladies Open de France in September last month, after carding a hole-in-one en route to a second round 64 (−7).With that win she is currently top of the LET 2021 Solheim Cup Points leaderboard and second on the Race to Costa Del Sol, a remarkable achievement in just her third year as a professional.

However little known, is that throughout her early golf career, whilst she’s been climbing the rankings and making a name for herself on Tour, Engström has also been studying to complete her education. 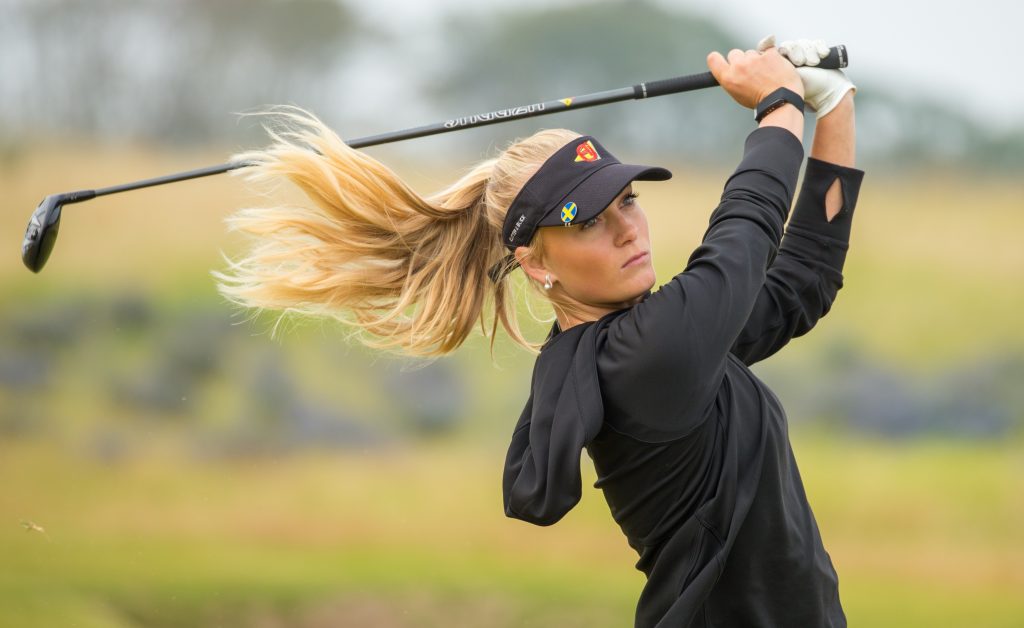 “I only turned professional three years ago at the age of 16, which at such young age gave me little choice but to continue with my studies. However, I felt it was important to continue this process and ensure I have a life outside of golf. I bring my computer and books with me wherever I’ve had to travel for tournaments! I use any downtime to study and ensure my grades remain high. Of course, it’s difficult and sometimes hard to find the energy to do both, luckily though my school have been very understanding and I have been fortunate that a lot of my fellow pupils are athletes too, which is helpful.

“Being able to inspire other girls to pursue their dreams is very exciting. If that remains the case I want to keep working hard and improve my game in all areas, so that others watching me play in Dubai are excited by what I’ve been able to achieve at a young age and consider to take up the game themselves. We’re very lucky to play golf alongside so many other inspiring women and to be able to travel to places such as Dubai to compete makes us very fortunate. My advice to any young girls watching us play this November is to just keep playing the game and to have fun whilst doing so. If you enjoy what you are doing the results will come.” 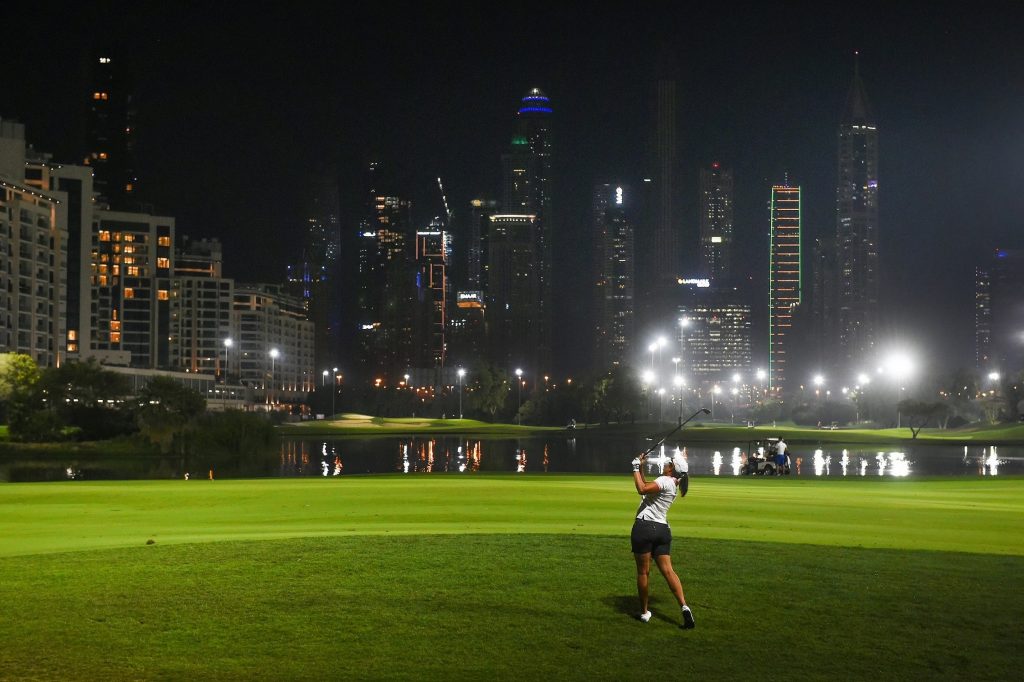 DUBAI, UNITED ARAB EMIRATES – MAY 02: Carmen Alonso of Spain takes a shot from the 5th fairway during Day Two of the Omega Dubai Moonlight Classic at Emirates Golf Club on May 02, 2019 in Dubai, United Arab Emirates. (Photo by Tom Dulat/Getty Images)