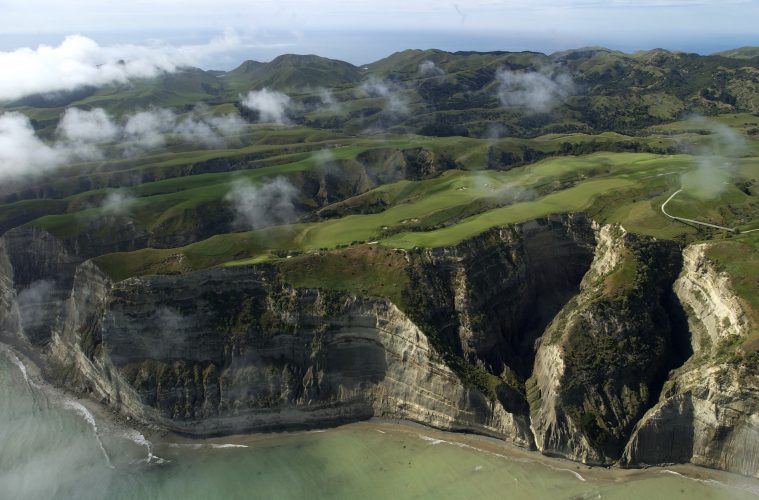 New Zealand: Rid of the Coronavirus but ready for golf travel?

I have been to the end of the Earth and damn if there isn’t a golf course there. When you arrive at the 15th green at Cape Kidnappers in Hawke’s Bay, New Zealand, you’ve reached the edge. You can go no farther. At the back of the green, the Earth drops straight down 600 feet to the Pacific Ocean and there is nothing else to see.

Until the moment I arrived at this spot, I had acknowledged the seaside holes at Pebble Beach to be the pinnacle of ocean side golf. But now, standing on this here staring out over the vastness of the ocean I’ve come to the conclusion that I have to rethink my understanding of the golf world; perhaps the entire world.

This spot at Cape Kidnappers, where land, sea and golf meet in such impossible perfection, you take in the as-far-as-the-eye-can-see view and contemplate the enormity of the world and golf’s small place in it. Here, on this spot, you just have to wonder how it all got this way.

But then there’s the closing stretch at Cape Kidnappers to deal with. The drama of the course, for the most part, is behind you, burned permanently into the part of your brain that holds your greatest golfing experiences. The closing holes are good ones, to be sure, but the whole course can’t play at the edge of the world, so, luckily, the 16th hole turns back toward safer ground.

If you’ve spent this “pause” contemplating the next bucket-list golf trip you need to check off, put New Zealand near the top. It’s handling of the pandemic was an exemplary model for the world. In June, while Covid-19 cases were again spiking in the U.S. and still rising around the world, New Zealand announced it had rid itself of the virus, having had only 1,154 confirmed cases and 22 deaths.

As many as four million travelers used to visit New Zealand annually, but how quickly the country will be willing to accommodate that many international visitors again is still unclear.

“I am confident that we will be sharing a travel bubble with our Australian friends by September 1, but the border opening to our American friends is very unpredictable,” says William Owen, managing director of golf packager Playing Around New Zealand. “Our summer season runs from November through to mid April and with tourism being our biggest industry it will cause further financial mayhem if we remain closed to the wider world during this time.”

Prime Minister Jacinda Ardern has been praised for leading the country in eradicating the virus and is likely to be cautious in reopening New Zealand, especially to Americans where the virus runs rampant.

But go as soon as you can. New Zealand’s patchwork history of Māori, European, Pacific Island and Asian influences makes it a cultural melting pot in a landscape of stunning natural beauty. It is the land of Kiwi, which is at once a furry fruit, a bird that can’t fly, and the nickname for the country’s native population. New Zealand sprawls across two large islands floating lonely in the South Pacific. Together they roughly equate in geographic size to the U.S. East Coast from Boston to Miami. Auckland is about where New York City would be; Wellington is Charleston, South Carolina, and on the South Island, Christchurch is about Orlando. You can travel the entire country and never get farther from the ocean than Atlanta.

Being Down Under, so the farther north you go the warmer it gets, and if you go to the southern tip of the South Island, you are surprisingly close to Antarctica.

The 400 courses from north to south are best described as at times so American you wonder why you flew halfway around the world to play, and at times so spectacular the thought of staying for another week or maybe a lifetime can’t help but enter your mind. 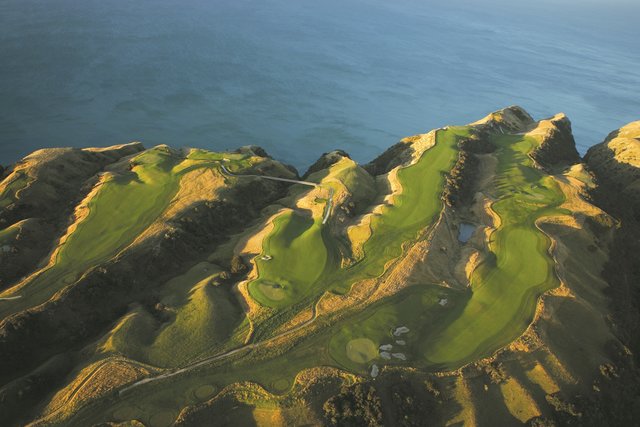 On the par-3 sixth at Cape Kidnappers, I’m wishing golf hadn’t been so hasty in moving away from metal spikes. My ball has come to rest a few feet to the left of the green, which in this instance means it’s just a few feet to the right of a cliff that plummets down to the Pacific. A little more traction would be a good thing.

The wind is blowing so hard out to the ocean that I’m actually considering taking an unplayable lie, even though the ball is sitting perfectly fine just a few feet off the fringe. But the angle of the terrain and the unencumbered wind don’t look like a good combination. I creep to the edge and see a large grassy ledge 10 feet down; sort of a buffer between golf and death. Relieved that even if I slip, I’ll survive, I play the shot and actually save par. This is just the first encounter with cliff side golf at Cape Kidnappers where you might think of the game in Barnum and Bailey terms: death defying.

Fairways nudge to the edge of crevasses so steep that if you survived the fall, which you wouldn’t, you couldn’t possibly climb back up. Greens are pushed to the very edge of available real estate, and the whole setting is so far from any mainstream golf setting that it has to be – almost by definition – one of the world’s great courses.

Lake Taupo is where Aucklanders go to vacation. Less than four hours south of the capital city, the Taupo Volcanic Zone is a setting of steaming cliffs, geysers, boiling lakes, bubbling mud pools and floating rocks called pumice. Orakei Korako is one of the best thermal areas left in the world and you can make the three-hour trek up the side of the volcanic slope of Mount Ngaruahoe and peek inside the active crater. Or take a bungee dive near Huka Falls. After, of course, a night or two (at least) at the opulent Huka Lodge, consistently voted by any source of world-class hotels as one of the planet’s best accommodations.

But don’t miss the golf near the lake. Wairakei International, New Zealand’s first internationally recognized course. Designed by Australian Peter Thomson in the early 1970s, Wairakei once appeared on lists of the greatest international courses.

The course pays tribute to New Zealand’s heritage with hole names drawn from the Maori language and its setting in New Zealand’s volcanic region, where mountains push up abruptly from the ground, creating dramatic shots like the sharply downhill tee shot to a mountain backdrop on the par-4 sixth.

Nearby, the Jack Nicklaus-designed Kinloch is built on volcanic terrain, flanked by rugged hills with panoramic views of Lake Taupo. This ramshackle layout is earthy, with the aura of a great links course even though it couldn’t be farther from an ocean on the North Island. 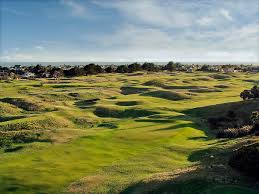 Farther south on the North Island, about 45 minutes north of the capital city of Wellington, Paraparaumu Beach Golf Club is considered the best links course in the Southern Hemisphere. Designed in 1949 by 1924 Aussie Open champion Alex Russell, the course has a feel like Royal Lytham & St. Anne’s, all the foils of a great links almost adjacent to the Tasman Sea, but surrounded by the town of Paraparaumu.

Paraparaumu Beach has hosted 12 New Zealand Opens and was once ranked by some golf magazines among the 100 best courses in the world. These days the only thing that holds it back is its length, and there’s no where to expand.

Up in The Northlands

The subtropical region on the northern-most point of the North Island is pinched by the Pacific Ocean and Tasman Sea. The Bay of Islands offers stunning ocean beaches, wineries and colonial-era towns like Russell.

While the golf is an eye full of stunning scenery, you can catch glimpses of New Zealand’s natural beauty along walking trails that take you past places like Haruru Falls on the Waitangi River or up to Paihia Lookout in the highlands overlooking the Bay of Islands.

Golf centers around spectacular Kauri Cliffs, but there is more to discover. Carrington Resort is New Zealand’s northernmost resort and its course resides on a stunning piece of seaside land, and while the length (7,100 yards) and sea breezes combine to present a formidable challenge, the beauty and wonderfully strategic par 4s hold your interest throughout the round.

Waitangi Golf Course overlooks the Bay of Islands near the resort towns of Paihia, Kerikeri and Russell. The constant change of views from the Bay of Islands to river and estuary views over Waitangi and Opua to rolling bush and forest views inland over Mount Bledisloe and Puketona keep the golf interesting.

As great as the Kauri Cliffs resort is, you get a better feel for the essence of the New Zealand Northlands by staying in an ocean-side hotel in Paihia; or better yet, take the car ferry out to Russell in the Bay of Islands archipelago and stay in a cliff side, ocean view house at Eagles Nest on Tapeka Point. 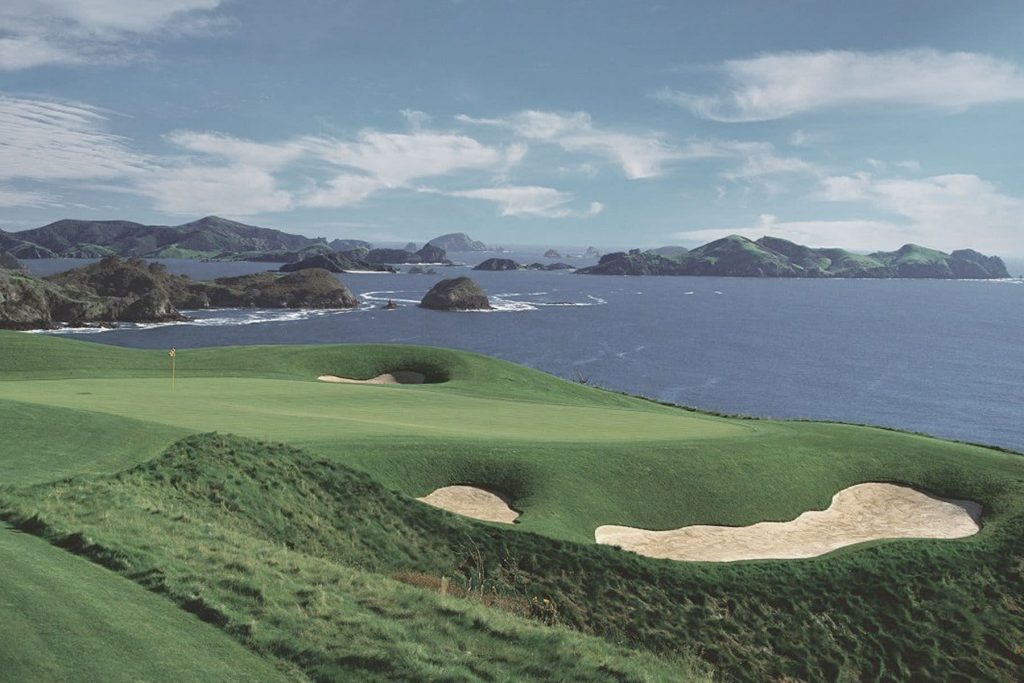 But don’t miss the Kauri Cliffs course. You can see the ocean from 15 holes and several hang on a cliff side that looks out over the spectacular Bay of Islands region.

For many years, Cape Kidnappers was considered the country’s best course. But Doak outdid himself in 2015 with Tara Iti, about 90 miles north of Auckland. Here craggy ribbons of green fairways stand out amid sandy waste areas that Pinehurst No. 2 would envy – all cozied up to the great expanse of the Pacific Ocean.

The club is private, but offers international travelers a one-time option to be treated as a member. That doesn’t necessarily mean one round of golf. You can visit for a week and play 36 holes a day, but once you leave, you leave for good–unless you become a member.

New Zealand golf writer Brendan James describes it this way: “If the North Island is the land of fire and steam (with its volcanoes and thermals), the South Island is certainly the land of water and ice. Ice ages, fault lines and tectonic plate movements have all made their mark on New Zealand, especially the South Island, which is home to the majestic Southern Alps, where a network of fiords and several glaciers that continue to march down into rainforest.”

A quick trip to the South Island (Middle Earth in “Lord of the Rings” and “The Hobbit Trilogy”) must include two courses designed by New Zealand-based John Darby. The Hills sits in the Wakatipu Basin, surrounded by the awe-inspiring snow-capped Southern Alps. Jack’s Point is wedged hard between the saw-toothed Remarkables mountain range and the majestic Lake Wakatipu and is often mentioned along with Cape Kidnappers and Kauri Cliffs as New Zealand’s most awesome.

Christchurch is the heart of the South Island. To the north are hot pools, vineyards and oceanic wildlife encounters. A journey west requires a train trip over the Southern Alps to discover rainforest and glaciers.

Queenstown’s reputation as a year-round playground for the adventurous is well deserved. You can mountain bike, bungee jump, skydive, climb a mountain, hike a glacier or take a hot air balloon ride through the mountains. Oh yeah, you can also play some good golf.

Terrace Downs is just over an hour from downtown Christchurch and plays against the backdrop of the almost unequaled scenery of the Southern Alps. If the North Island has spectacular seaside courses, the South Island has equally spectacular mountain courses. You’ll be forced to agree when you stand on the tee box of the par-3 15th that clings to the edge of a gorge 500 feet above the Rakaia River.

Clearwater Resort is known for its water features, even though none is the ocean. Millbrook Resort is nestled in the stunning landscape of the film trilogy “The Lord of the Rings,” though the terrain of the course is not nearly as rugged.