09 August, 2021, Sotogrande, Spain: This weekend saw Golf Saudi host leading female Saudi personalities at the second Aramco Team Series tournament of the year in Sotogrande, Spain. Activities were organised as part of Golf Saudi’s wider Mass Participation programme, which aims to grow the game of golf and boost participation in both Saudi Arabia and internationally.

Participants were introduced to golf by Golf Saudi’s Mass Participation senior professionals Grant Smith and Steven Troup, with guests including Saudi health coach and entrepreneur Nawal Alkhalawi, the founder of the first Saudi female football team Maram Albutairi and social media influencer Hana Bassrawi. As part of the introduction to golf, both Grant and Steven were on hand to provide the participating ladies with some beginner’s tips that would help them pick-up the game, as well as some fun challenges and the chance to try their hand on a golf simulator. The clinic also saw the rollout of Golf Saudi’s newest event activation, a challenge course that was devised in partnership with “The Stadium Concept”, a 360º educational programme, which introduces participants to the game in a fun and easy way. Following the conclusion of the clinic, participants were also treated to a tour of the golf course at La Reserva Club in Spain.

Golf Saudi’s Mass Participation programme remains a top priority for the organisation as it seeks to attract and inspire the next generation of Saudis to take up the game and develop future home-grown champions. To this end, Golf Saudi launched “The Ladies First Club” in November 2020 to 1,000 Saudi women, offering complimentary membership inclusive of golf lessons, driving range access and a 9-hole experience played with an instructor on three different courses. The organisation also hopes to use its Mass Participation programme to meet its targets of creating 3,700 jobs by 2030, as well as training up to 24,000 new golfers within the next decade.

Amongst the guests was Maram Albutairi who founded the first Saudi female football team and felt that the work that Golf Saudi was doing to promote the game was a good sign for the future of the Saudi women’s sports sector: “It was such an honour being in Sotogrande for the second Aramco Team Series tournament and to have the chance to meet in-person with such an array of talented female golfers. As a Director of Eastern Flames Football Club in Saudi Arabia, I know first-hand the positive impact that sport can play in the lives of young girls and women. It’s great that Golf Saudi is paving a way not only for Saudi female golfers but for other women internationally, giving them the opportunities to learn, develop and compete in world class tournaments.” 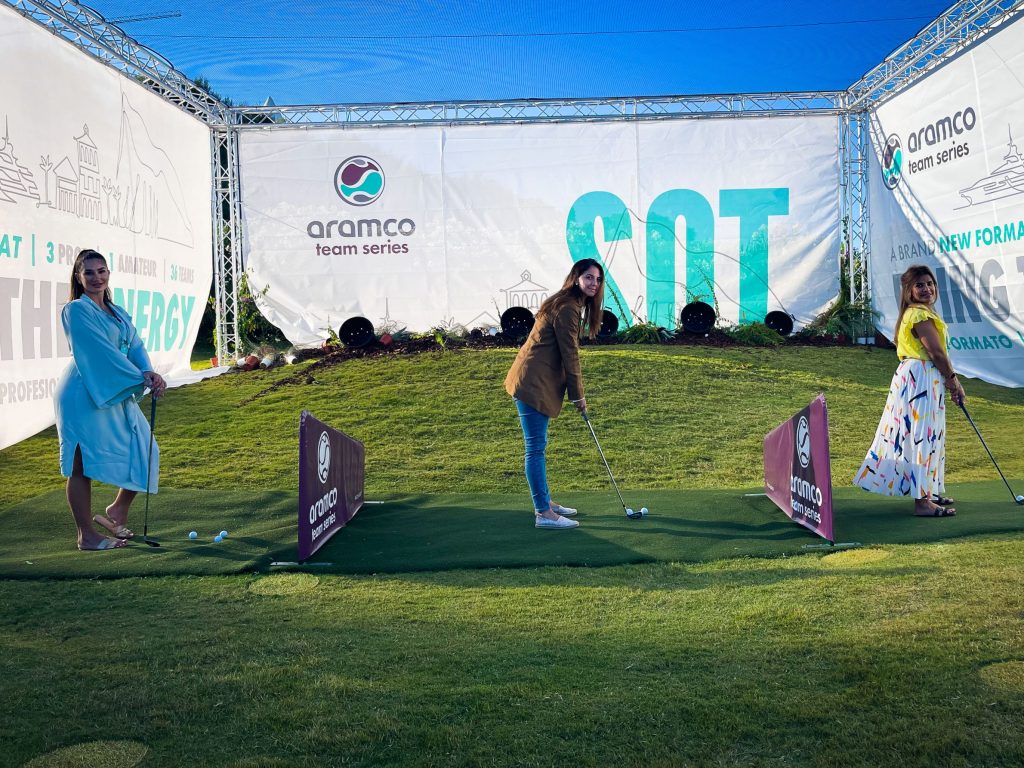 Other guests of Golf Saudi included Saudi health entrepreneur Nawal Alkhalawi who enjoyed giving golf a go for the first time and expressed her desire to pick-up a club upon her return to Saudi Arabia following her stay in Spain, saying: “Golf is a game of patience. Practicing alone is a meditative act, whilst playing with friends and family cultivates deep connections and competing professionally requires a strong mind, character and skills. These are all positives and so it is gratifying to see that Golf Saudi is investing both time and resources to bring this great game to the people of Saudi Arabia. From what I’ve seen here in Sotogrande, it won’t be too long until we see the first Saudi women compete in similar international tournaments.”

An event entirely unique to golf, The Aramco Team Series is a first of its kind. The initiative, which was developed by Saudi Arabia, consists of 36 teams made up of three pro’s and one amateur with scores from all four contributing to the final result. Following the inaugural London and the conclusion of the Sotogrande event, the Series will now move onto New York from 14th – 16th October and finally Jeddah, Saudi Arabia, from 10th – 12th November.

For further information on Golf Saudi and the Aramco Team Series, please visit: www.golfsaudi.com and https://aramcoteamseries.com/.