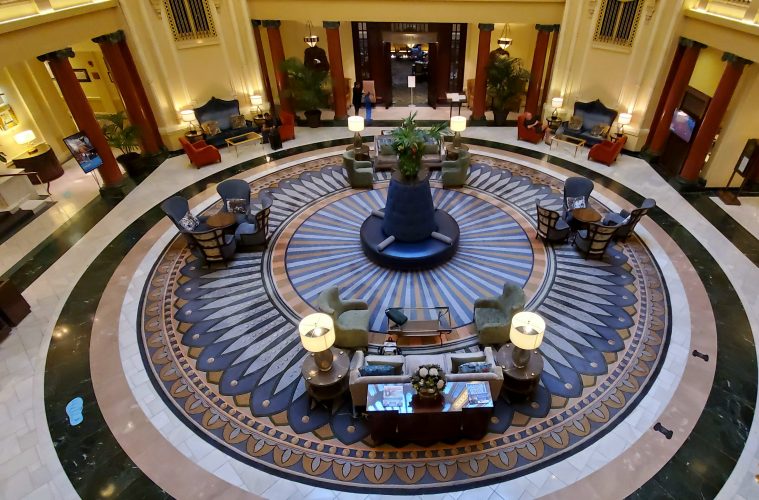 Get Moving to Mobile

Home to the first Mardi Gras, Mobile, Alabama considers itself New Orleans’ big brother. Embracing the ‘60s history of unrest, it has stood through the years as a juggernaut of commerce with ship building, and a naval station. The Battleship Memorial Park displays an array of historic aircrafts and ships including the USS Alabama. Step aboard for an impressive sense of naval life. Climb the ladders to the bridge and imagine shooting the mighty canons and it will never be the same watching the Battleship movie again.

Stay at the Battle House Renaissance Mobile Hotel and Spa in downtown Mobile, the former headquarters of Andrew Jackson for more history with modern amenities like the rooftop pool, bar, and spa. The ladies’ oversized jacuzzi with perfect temperature and jet streams shares a spacious room with a blazing hearth and plenty of lounge chairs. The steam room was converted to an infrared sauna which not only feels good but delivers healthy benefits for skin and circulation.

While Mobile is a point of national security there is no lack of leisure activities including points on the RTJ Golf Trail. Magnolia Grove’s parkland style Crossings Course is the host of LPGA events. Along with the Falls Course and the Short Course, it is a serene walk through the hardwoods and pine trees along lakes and creeks. Pull up a rocking chair on the clubhouse porch to breathe in the blossoms of magnolia and azaleas.

Every day at the Battle House, a mixologist concocts a punch to share in the lobby. If beer is your beverage of choice, breweries abound within walking distance. Pass by shops, restaurants and a park to the Oyster City Brewery which opened in Mobile in ‘17 as its third location. Tours can be comprehensive or quick as GM and Brewer, Taylor noted, “three vessel fermentation brewers make yeast and yeast makes beer. 30 barrels results in 40 gallons of beer.” There you have it.  Samples are offered before ordering your mini-5-ounce, full pint, or growler from the extensive menu of brews.

A few blocks away Old Majestic Brewing was having a party catered by Hall’s Sausage, which was tasty, but we had to save room for Wintzell’s Oyster House midway between the two breweries. This is a fun and busy restaurant with a wide variety of oyster presentations as well as a full menu, bar, and entertaining sayings plastered on the walls. Cuisine is not a sidebar in Mobile and the ultimate dining experience is across the street from the Battlehouse at Dauphin’s. Patrons ascend to the 34th floor, 424 feet high in the sky overlooking Mobile and the Bay, as if you are a drone. From apps to entrees and desserts paired with fine wine and cocktails, the cuisine is also high on the memorable dinners list. After dinner, for access to Las Floriditas speakeasy on a floor below, go online for their secret code, such as Havana, whisper it to Roosevelt at his desk and he will swing open a bookcase wall transporting to yesteryear with today’s cocktails.

Downtown is fun to explore while The Grand Hotel Golf Resort & Spa in Point Clear is a complete shoreline retreat with 36 holes at the Lakewood Golf Club. We left the downtown Mobile in a down pour and when we crossed under the water to another bay, it was a new day in Pointe Clear from a weather and resort perspective. Many renovations have been completed since we were last there. Purchased by Retirement Systems of Alabama after the hurricane, eateries have been updated. The beach was busy as was the new pool complexes, one for guests and one for members like bookends to the resort. Artwork is showcased by JJ Gaudel who studied under Salvador Dali. It is hard to 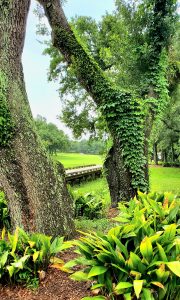 believe that this elegant, waterfront Marriott Resort was a former confederate hospital. As a reminder, a cannon firing ceremony salutes sailors of past and present everyday. Boardwalks link a fishing wharf, stocked with bait and poles, to a marina, a soft sandy beach, and the elaborate pool complex. Plus, it has perhaps the best spa on the RTJ Trail. Grand1847.com is a fully loaded site with daily revisions and a weather cam. Of the 135 Autograph Hotels, it places #1 in the “Tend to recommend” category. We certainly recommend it and guests are also shuttled to town so you have the best of all worlds.

The Lakewood Golf Club is private with access to guests of the resort and RTJ card holders on a limited basis. First constructed by Perry Maxwell in 1947 as two nines, The Azaleas and Dogwoods Courses are now each a full 18 layout filled with mature magnolias and oak trees. Lakes come into play as do the sugary sand bunkers.  Niall Frazer, Director of Golf came to Lakewood in 2011 and says he will go nowhere else. That is understandable.

“Uniquely Mobile” is a fitting tagline for a gulf coast city that has stamped America in so many ways. And golf on the RTJ Trail is not the least of them.  www.rtjgolf.com 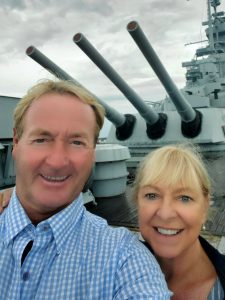