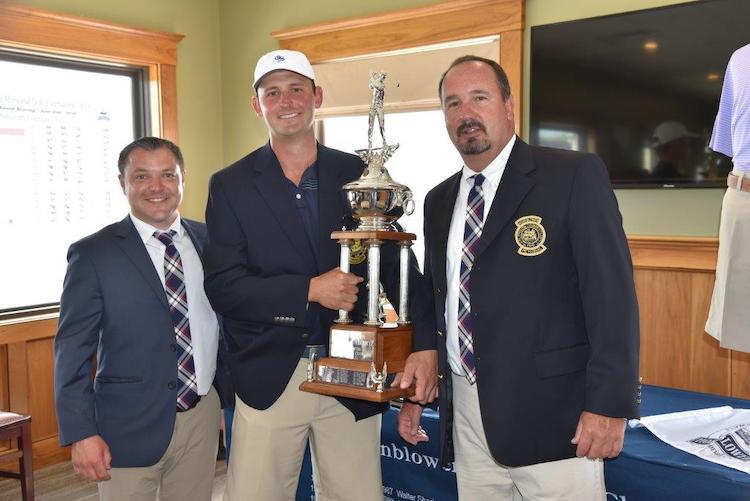 A rainy day at a golf course can lead to all sorts of creativity. Players looking for a little action might kill time chipping or putting their way around the pro shop or clubhouse. Others might settle in for a card game. In the case of Skeet Ellis and Gerry Goodwin at Plymouth Country Club in 1962, they opted to do some spring cleaning and discovered a forgotten trophy from the 1930s tucked in the back of a dusty closet.

Two words were inscribed on their discovery: Hornblower Trophy

Considering the location of Plymouth Country Club on Warren Cove along the edge of the Atlantic Ocean, a name like Hornblower seems a worthy seafaring reference for a golf event. However, the “Hornblower” inscribed on the trophy had nothing to do with oceans or coves or horns or rocks. The trophy bears the name of a Boston businessman, Henry Hornblower, who donated his own land to build six of the club’s original holes. The Pilgrim Hotel offered up the final bit of land to complete a nine hole course. In 1921 Donald Ross designed the second nine holes which outshined the original holes. Hornblower and the membership convinced Ross to build nine more holes; he agreed. By 1929, Plymouth Country Club had 27 holes; it proved too much for the club to maintain, so they gave the original nine holes to a local pro named Donald Vinton to run as a public course.

In the teeth of The Great Depression, the original nine holes closed in 1932; however, Henry Hornblower used his wealth and influence to ensure Plymouth CC’s safety, and Ross’ 18 holes lived on. 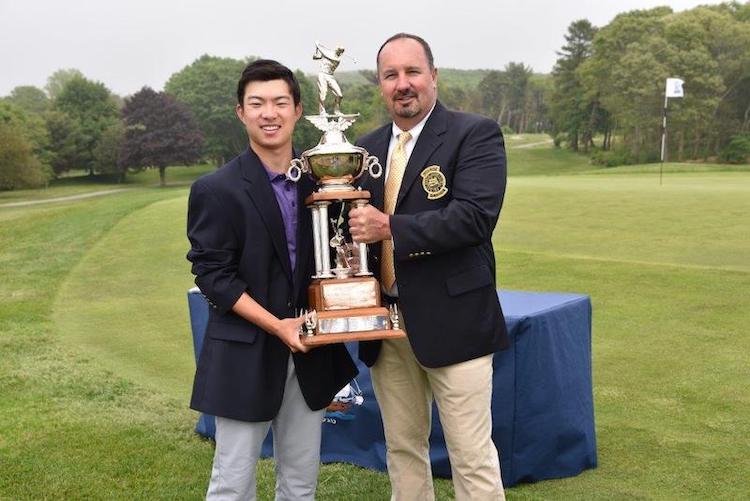 In an expression of its gratitude, the club presented Hornblower with a trophy; two words were etched on it: Hornblower Trophy.

Henry Hornblower always believed golf had a place among the masses – an honorable game that everyone should enjoy. The trophy sparked an idea, and he decided to create a tournament for the best amateur golfers in New England. The winner would be awarded his Hornblower Trophy.

The Hornblower was born.

Over the next six years, the event grew more popular with every passing year, becoming an important date on the calendar for players across the region. The first winner, Bill Arnold, hailed from another Donald Ross design: Charles River CC.

Unfortunately, as the Hornblower was gaining notoriety, a war was raging in Europe that forced the Hornblower, and nearly every other sporting event in the country, to take a hiatus. Sadly, as an added layer of tragedy, Henry Hornblower suffered a fatal heart attack in 1940 while visiting Pinehurst, North Carolina. The combination of his death and the impact of World War II caused the Hornblower Tournament to be forgotten. The trophy found its way to the back of a closet.

Harold Goodwin, who would become the head pro at Plymouth CC in 1942, won the Hornblower in 1939 as a talented amateur. Harold also happened to be the father of Gerry Goodwin, the man who Skeet Ellis helped dig through that dusty closet in 1962. That generational link may have been the ember that sparked the Hornblower’s rebirth in the 1960s. 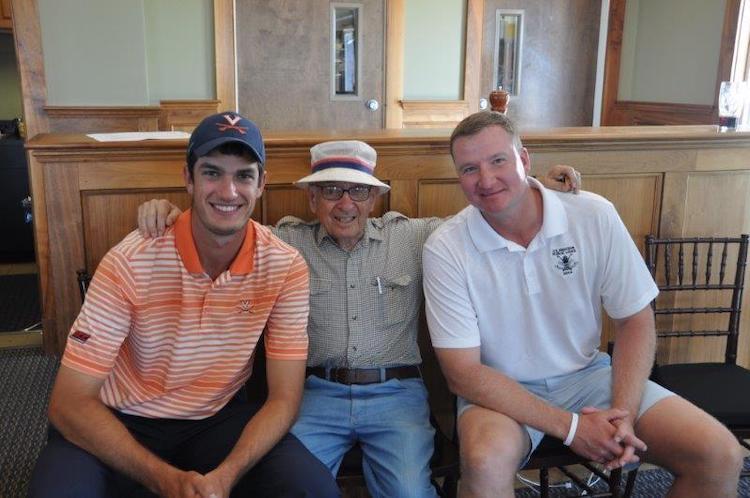 As soon as the trophy was rediscovered, the wheels started turning at the club. Gerry Goodwin, Skeet Ellis, and a board of members began planning an event. Wisely, they started small and made The Hornblower an event for Plymouth CC members. However, in 1965 the tournament’s board opened up the Hornblower to talented amateurs, invoking the spirit of Henry Hornblower’s original desire in the 1930s: spread the game he loved on the land he loved.

Players who have competed in the Hornblower speak about the spirit of the event and how distinct it is among the slate of events in the Northeast. Unlike many prestigious amateur events, The Hornblower is organized and run by the members of Plymouth Country Club. It’s the first big event of the season, played at the same course every year, and the winner is awarded a trophy and a jacket.

Competitors recognize how difficult it is for the members to give up their beloved course on a weekend in June. Nonetheless, every year the members welcome back the players with smiling faces. They are excited to show off their course. Mike Ellis, the current tournament director and son of Skeet Ellis, said, “The same guys sit at the registration table every year. They know the guys by name, the players know them.”

The spirit of the event is loose and fun – in the words of 2020 winner Nick Maccario, “If you have a bad round on Friday, you’ll have a great time in the clubhouse. If you have a great round on Friday, you’ll have a great time in the clubhouse.” The fun isn’t just limited to the clubhouse, though. Mike Ellis and Frank Vana Jr. both spoke about the group of members that head out to The Perch to watch the “carnage” on the seventh and eighth holes. Both greens are treacherous tests on a normal day, but toss in a bit of pressure and an extra foot or two on the stimpmeter and even the best players in the region will eat some humble pie. In the words of Mike Ellis, “They (the members) like seeing the guys struggle on their course because we do it every day.” Hanging out on The Perch looks like so much fun that some competitors join the members after their round to enjoy the show.

While The Perch might haunt some players, success at the The Hornblower has filled winners with the gumption to take the next step and turn pro. In 2012, Collin Brennan shot a 76 in the first round and assumed he was out of the running after the leader shot an opening round 67. Brennan licked his wounds as a storm rolled into Plymouth Cove that could have capsized The Mayflower. In what his caddie described as some the worst golfing weather he had ever seen, Brennan fired a second round 3-under par 66 to win. That early season victory kicked off a great summer for Brennan that culminated with the Richard D. Haskell award as Mass Golf Player of the Year. Within the year, Brennan turned pro and moved to Florida. He credits that windy, rain-soaked victory for providing the self confidence he needed to pursue life as a professional.

The Hornblower boasts 14 players that ended up turning pro, but only one was a homegrown talent that learned the game at Plymouth Country Club. The 1975 and 1977 champ, Bill Buttner, credits his wins with giving him the confidence to turn pro. Buttner didn’t pick up golf until high school when an injury waylaid his baseball aspirations. Buttner was a grinder who prided himself on making his way to the range after rounds to continue to improve. He recalled a frigid day in 1975 when he recorded his first Hornblower triumph. Following his 1977 win, Buttner finished out his time at the University of North Carolina where he initially hoped to play basketball. Instead he enjoyed a successful decade on the PGA TOUR and now coaches the Eckerd College team and encourages his players to play in The Hornblower.

While a Hornblower victory can be a launching off point, for other golfing greats it is the proverbial white whale. Two time Massachusetts Player of the Decade and Mass Golf Hall of Fame member, Frank Vana Jr. counts the Hornblower in the small number of tournaments he doesn’t have in his trophy case. The cruel irony is that Vana has won a different event at Plymouth Country Club – the 2018 Massachusetts Mid-Am – with his friend and Hornblower director, Mike Ellis, as his caddie. Even as he continues to chase the elusive Hornblower trophy, Vana Jr. speaks highly of the course and the event, “I love the Hornblower. Everything about it – the golf course, the people, where it’s located. Everything.” 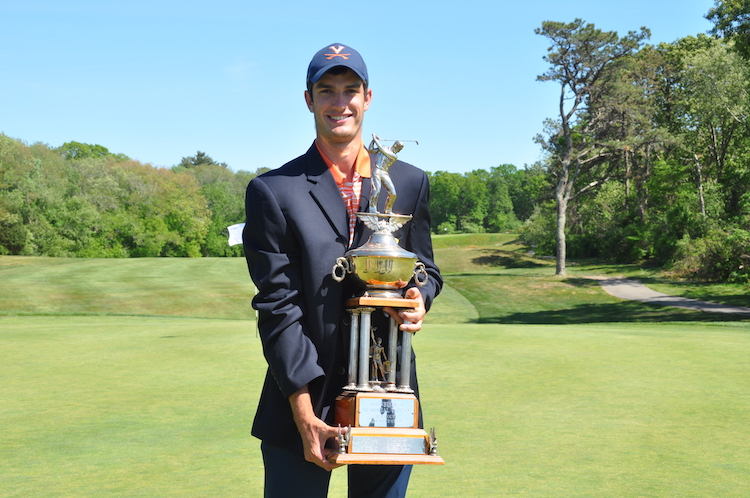 In 2020, due to COVID-19 it appeared the Hornblower wasn’t going to happen for the first time since Skeet Ellis and Gerry Goodwin dug the trophy out of the closet in 1962. However, when the Mass Open was cancelled, an opportunity presented itself and Mike Ellis jumped at the August opening. The membership, experiencing an even shorter season, graciously gave up their course on a Monday and Tuesday to keep the tradition alive. The eventual winner, Nick Maccario, had collected four straight runner-ups in regional amateur events in July. A 3-under 66 in gusty winds, just like Brennan in ‘12, helped Maccario win the Hornblower by one shot and ultimately secured his first Richard D. Haskell trophy.

As the 57th Hornblower approaches this June, plenty of players have it circled on their calendar so they can compete for a slice of Massachusetts golf history. All in the name of amateur golf and growing the game, just as Henry Hornblower, Skeet Ellis, and Gerry Goodwin intended.