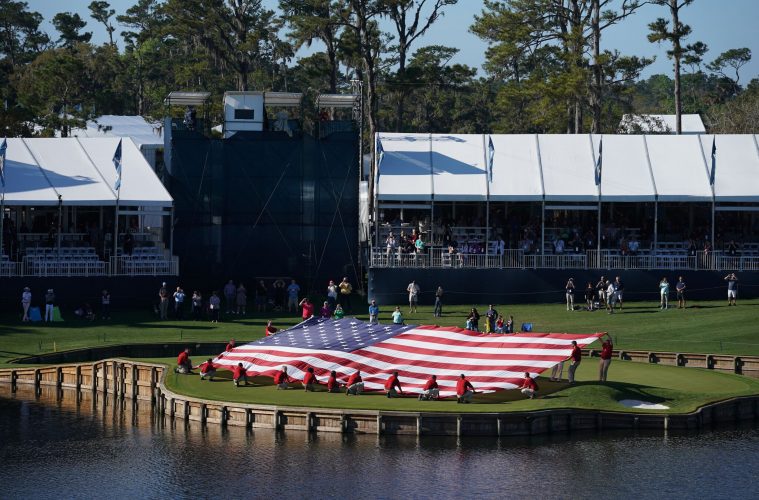 PONTE VEDRA BEACH, FLA. – THE PLAYERS Championship, which returns to TPC Sawgrass in less than 35 days (March 10-15), has a long-standing commitment to hosting and honoring men and women of the U.S. Armed Forces and their families. The 2020 tournament will once again offer a strong lineup of activities for military members, veterans and their families.

“Jacksonville has the largest military presence and veteran population in Florida and is home to some of the largest Navy bases in the country,” said Executive Director of THE PLAYERS Jared Rice. “It is incredibly important that we embrace our military personnel and their contributions to our community and our country. They make daily sacrifices in order to protect and preserve the freedoms we enjoy, and we look forward to honoring them at this year’s tournament.” 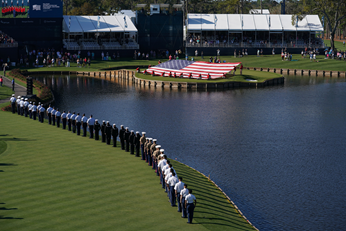 THE PLAYERS provides complimentary admission to active duty, military retirees, military reserve, National Guard, military spouses and accompanied dependents with valid credentials and identification. Veterans are provided an exclusive offer, permitting them to purchase one (1) ticket for themselves and one (1) ticket for a guest at a discounted rate per day ($20/each – Tuesday and Wednesday; $30/each – Thursday through Sunday).

All military personnel must verify their military status by going to THEPLAYERS.com/tickets and clicking on “military admissions.” Upon verification, a voucher will be issued for each day that must be printed and redeemed on-site at the Love, Nicklaus, and Couples entries. Valid military identification is required.

NOTE: Parking is not included in the complimentary, or discounted, ticket for military.  Parking passes are required each day, Tuesday-Sunday, and can be purchased at THEPLAYERS.com/parking. Parking will not be sold on site.

Tuesday & Wednesday parking costs $15 per day (plus tax) and Thursday- Sunday costs $40 per day (plus tax). As in years past, THE PLAYERS will offer fans free parking passes if they carpool with four or more people. These passes are limited and must be downloaded in advance. Rideshare will continue to be one of the easiest modes of transportation, with drop off and pick up located at the Couples Entry off of ATP Boulevard, just steps from the 15th hole at TPC Sawgrass.

Each year, THE PLAYERS designates the Tuesday of tournament week as Military Appreciation Day, complete with a ceremony of nationally-ranked dignitaries, military pageantry and a culminating concert. This year, for the first time in tournament history, a pop/EDM artist will perform at the Military Appreciation Ceremony and Concert – Grammy-Award winning artist The Chainsmokers will take the stage on Tuesday, March 10, with the concert taking place on the world-famous island green 17th hole shortly after 5 pm.

The Chainsmokers were selected because of their strong connection to the military. They have hosted and supported a number of military outreach efforts, including a concert for deployed military members who were unable to be with their families for the holidays.

Hospitality: Weeklong access to the to the Birdies for the Brave® Patriots’ Outpost presented by United Rentals

Throughout tournament week, all active duty, Reserve military members, military retirees, veterans and their dependents will have access to the Birdies for the Brave ® Patriots’ Outpost presented by United Rentals, a hospitality tent reserved exclusively for the military which offers complimentary food, beverages and activities.  Located near the tee at No. 16, the Patriots’ Outpost is financially supported by United Rentals, THE PLAYERS volunteer leadership, the Red Coats, and Jacksonville-area companies and individuals.

THE PLAYERS will feature recognized leaders, military officials, athletes and champions in the Birdies for the Brave Patriots’ Outpost during tournament week. A series of meet-and-greets will be hosted each day, where attendees can meet and interact with these leaders, resource experts and military officials. A schedule, spotlighting each leader, will be announced in the coming weeks.

During the 2019 tournament, THE PLAYERS hosted roughly 20,000 military service men, women and family members in the Patriots’ Outpost.

Prior to tournament week, THE PLAYERS will welcome active duty, Reserve, retired military, veterans, and military spouses to TPC Sawgrass on Saturday, March 7, from 11 a.m. to 2 p.m. in the Birdies for the Brave® Patriots’ Outpost to participate in its eighth-annual Military Job Fair, in partnership with the Jacksonville Military Veterans Coalition and sponsored by United Rentals.

The Military Job Fair is free and open to military personnel, veterans and military spouses who are seeking employment.  There will be approximately 50 companies on hand, all with open hiring opportunities.

On Sunday, March 8, THE PLAYERS and Birdies for the Brave® will again partner with Operation Shower to host a private, invite-only, group baby shower for 40 military moms-to-be.  Scheduled to be held from 12-2 p.m. in the Birdies for the Brave® Patriots’ Outpost, the event will be sponsored by United Rentals and will feature Operation Shower’s signature Shower-In-A-Box, high-quality gifts for the moms and babies provided by sponsors and donors.