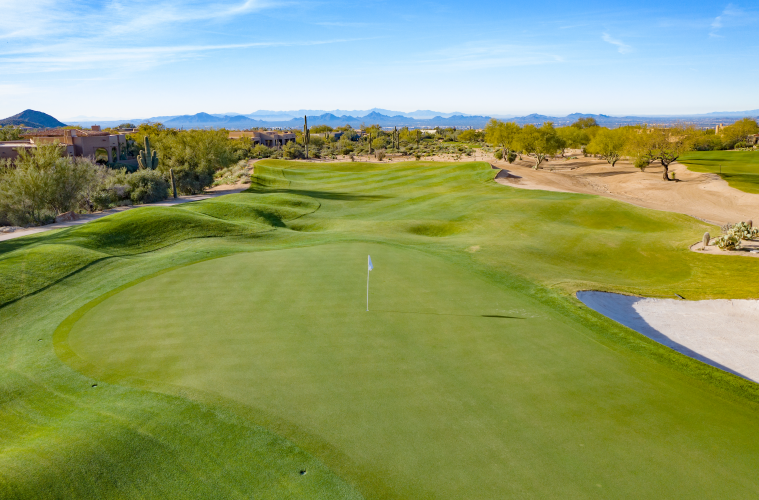 One of the most difficult assignments in course design is successfully balancing challenges faced by both low and high handicap players respectively. Versatility lies at the heart of ultimate hole greatness — mandating golfers, of all playing levels, to combine physical and mental acuity at all times. Holes that accentuate choices to be made are ones that prove to be the most bedeviling.

The 13th at Desert Highlands is an excellent example of a mid-length par-4 — the kind of hole generally viewed by better players as easy fodder. That’s hardly the case here. 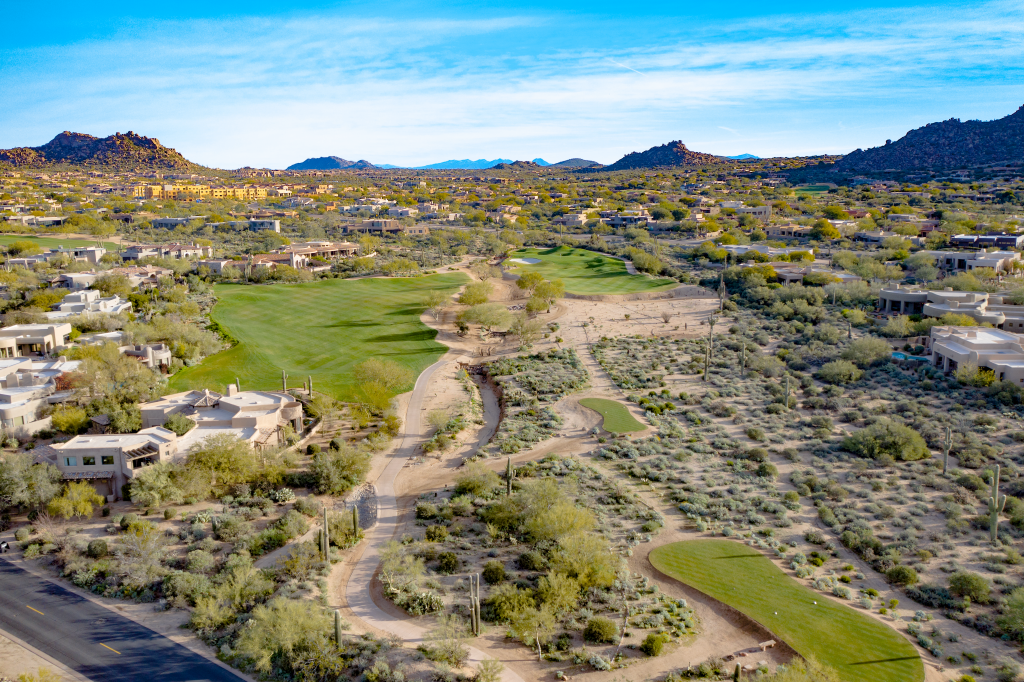 Jack Nicklaus played a major role in reshaping how golf and the desert environment intersect in the sweeping Valley of the Sun area in Arizona. It’s hard to imagine now but when Desert Highlands came into public view it was during the original Skins Game competition between Nicklaus, Arnold Palmer, Tom Watson and Gary Player in 1983 — the same year the club opened. The striking contrast between the verdant cut grass and the stark desert environment presented an eye-catching scene.

The 13th provides one of the more common design elements used by architects — the split fairway. However, far too many times when the split fairway concept is put into practice — the need to weigh both fairway options is usually not carried out with one option clearly superior than the other. That’s not the case here. 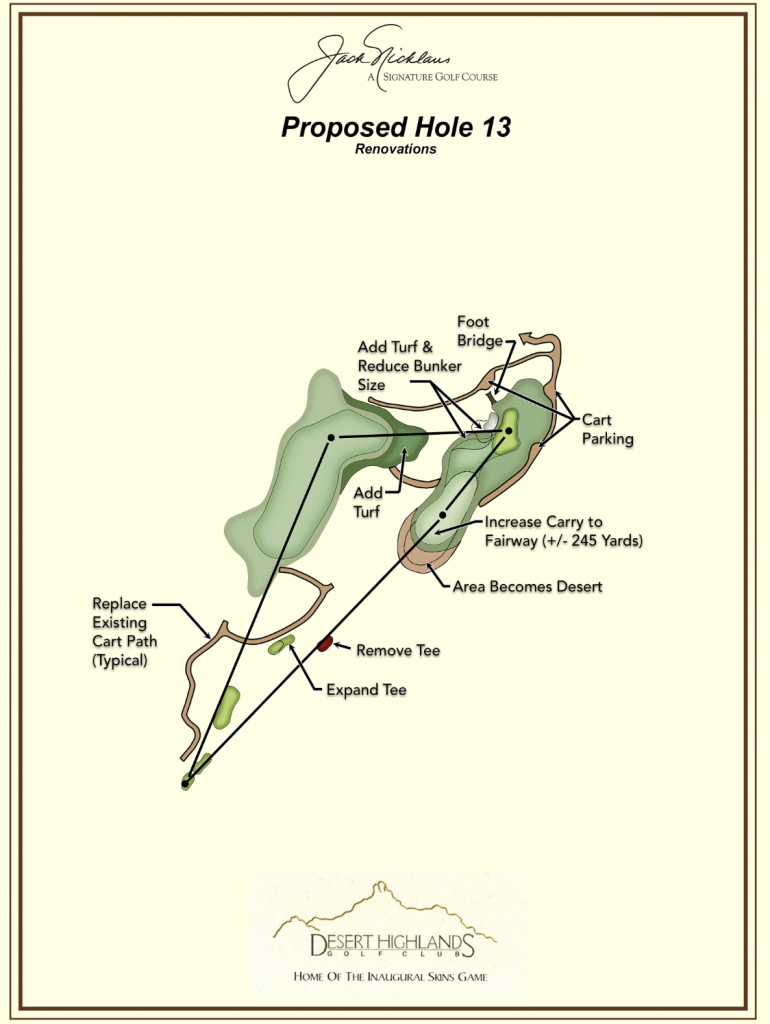 When you stand on the tee box — you’re presented with two alternate pathways. Clear choices with varying demands each dependent upon the golfer deciding what avenue works best for them. The left fairway option is considerably wider than the right. Players opting to play in this direction will increase their odds in having more fairway at their disposal, but the real issue emerges with the approach shot. Nicklaus angled the putting surface so the percentage of available landing area is narrower from that angle. To complicate matters, there’s a fronting bunker eagerly awaiting the timid play. In its original form the fronting bunker was massive — swallowing up anything not crisply struck. Recent work by the Nicklaus team has reduced the size of the bunker but its impact is still present and needs to be accounted for with the approach.

The other fairway option is quite daunting — primarily the visual apprehension caused from the tee. Players can attack the hole head-on but the requirements mandates a laser-like tee shot that, at minimum, must carry 245 yards to safely reach the fairway area.  One of the aspects of the right side is its lack of any fairway border. Pushed or pulled tee shots will find the native desert area that awaits. Such an outcome can range from having no second shot or having one impeded in some way. Rarely does a misfire from the tee escape unscathed. 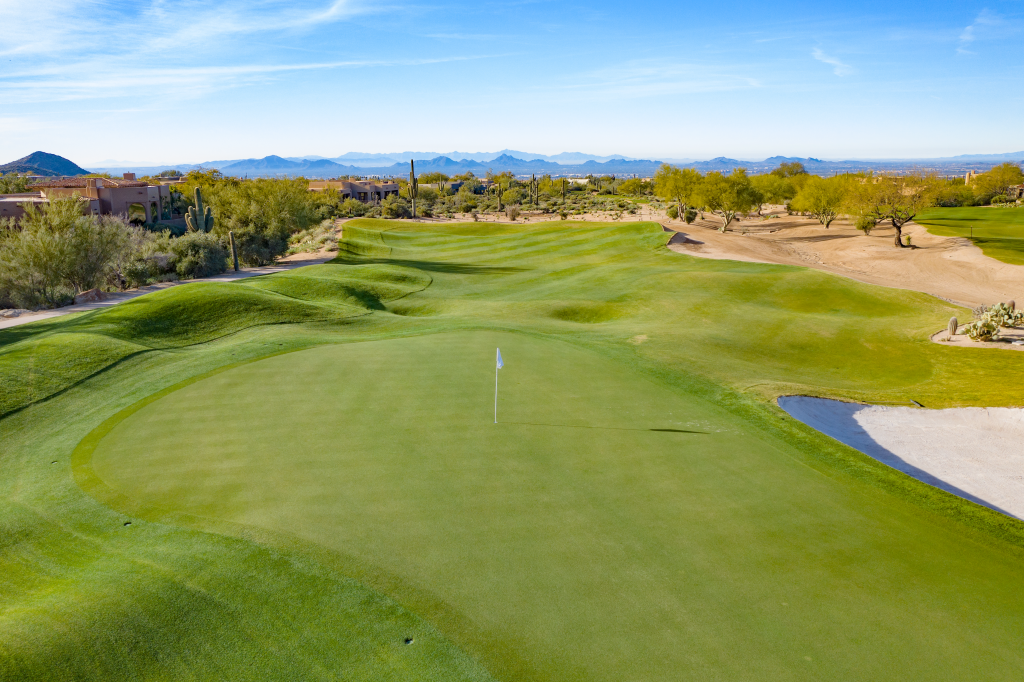 Yet, if one is successful in marrying accuracy and length — the reward is a far easier approach angle. The green provides its share of contours with a configuration far from a pedestrian in character. In golf architecture today — stellar par-4’s less than 400 yards are hard to find.  Those providing a meaningful challenge in striking the appropriate balance between risk and reward and placing squarely on the shoulders of the golfer to decide what route to follow.

The 13th at Desert Highlands does this in supreme fashion.