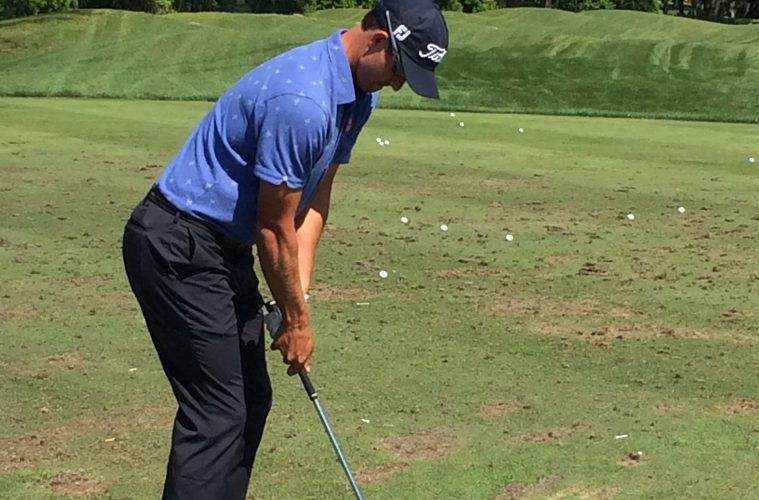 Play Better Golf by Sitting on Your Couch

Watching the best players in the world play golf can produce many benefits. Some would say it’s an easy way to avoid responsibilities and/or the fastest route to a late afternoon nap. I would not disagree with either point, but I would also propose it’s also a terrific way to improve your golf game.

While we all want to bomb it like Bryson, flop it like Phil and putt like Tiger, the reality is that will never happen. At least not with regularity.

But there is a lot we can learn by watching the best in order to play our best.

In fact, next time you have the chance to see a tournament in person, I would encourage you to spend some time watching the players on the range before or after their round. You can pick up some very good habits watching them in person.

When that’s not possible, flip on the Golf Channel during practice round coverage (Tues, Wedns) or “Live From” broadcasts to learn a lot from the world’s best men and women. Here are a few things to look for.

Tour players don’t grab driver and wail away for 10 minutes while scarfing down a hot dog, and neither should you. They’re very methodical in their preparation and many have a set routine they follow to get their game, mind and body ready to play their best.

Now, look, time doesn’t always allow for a lengthy practice session but try and create a reasonable routine that gets you ready for what’s ahead…even if it is just a casual knock-around with your pals.

Practicing with your irons and wedges will give you good tempo and feel to take to the course. Jordan Spieth starts his warm up with a game called “walk the dog.” He starts with an easy wedge shot and, wherever that ball stops, it becomes the target for the next shot, and so on. Each one goes a bit further until he’s hitting full wedge shots, has a nice feel for the ground and has developed a solid tempo. He also gets a sense for what clubs and shots are feeling good that day.

It’s also a good idea to practice the first tee shot before you head out. Maybe it’s a driver you need to fade slightly, or a long iron to a narrow landing area. Simulate the experience standing on the tee, pick a target and hit a good shot to approach the first hole with confidence.

Practice with a Purpose

Much like your pre-round warm-up, it’s always good to have a plan going in to your practice session. For most of us, we don’t get many opportunities to actually work on our game so use the time wisely.

When Justin Thomas practices, he balances keeping good skills sharp and refining the shots that frustrate him the most.

As he told Golf Digest, whether you track stats or not, knowing that you tend to pull your wedge shots, are fading your long irons or aren’t consistently getting up and down should tell you that in the limited window you have to practice, pounding on a driver is probably not the best use of your time. Hit a few drivers to reinforce your method (and have a little fun), but work on understanding what you’re not doing well, and fixing it, to really use the time effectively.

Also, randomize your practice so you’re not just hitting a lot of the same clubs over and over. Rarely on the golf course do you have two of the same shots in a row.

For example, try and simulate the sequence you hope to have on the golf course. Start with a tee shot to a specific target (I like to pick the area between two flags as my “fairway”), then hit a mid or short iron to a target and then a chip or pitch shot to a closer target. You can always give yourself a mulligan if you want, but try not to spend too long on one specific shot.

I play occasionally with a guy named Paul Pasternak who has a terrific short game. In fact, he can get up and down from just about anywhere (including the fairway where his ball often comes to rest) and it’s something that he can rely on to salvage a good score from pretty much any situation.

His short game is a “lifesaver” he can rely on when other skills aren’t in top form.

What’s your “lifesaver” on the golf course?

Maybe you can choke down on a driver or roast a three wood to find the fairway when you absolutely need to. Or you can make 5 foot putts with regularity. Or can knock it close from 100 yards out.

Phil Mickelson is a top five all-time player because he’s like a magician with a wedge in his hands. He has spent a lifetime mastering the short shots and can rely on his touch near and around the greens to save himself from whatever trouble he finds, usually with spectacular results.

If you don’t have a clear “go to” strength, work on developing one that you can rely on when the pressure mounts.

What you can learn very quickly from watching the best players, and immediately implement in your own game, is tempo.

It’s very easy to get too quick in your takeaway or in your transition down to the ball. Similarly, deceleration into the ball is major issue with amateur players who get timid at contact and end up chunking the ball.

Great tempo is like a pendulum that swings with the same rhythm back and forth.

While that tempo is relatively universal (or should be), your speed determines how fast or how slow you make those counts. It takes three times as long from the start of the swing to top of the backswing as it does from top of backswing to impact.

And the best rhythm in golf can be found with the ladies on the LPGA Tour.

We’re all told at some point that 70-80% speed produces the greatest results because it increases the likelihood of contact with the center of the clubface, yet how often do we see people overswing trying to “crush the ball?” And how often does that effort lead to searching the woods for the result?

Pull up videos of LPGA Tour players, or check them out on Golf Channel, to see what beautiful rhythm looks like. Many of their swings, like Fred Couples and Ernie Els, define “effortless power” because their tempo is so smooth.

One of the best lessons I ever received was the seven second rule. When you hit a bad shot, you can think about it for seven seconds before you start thinking about what you need to do to recover. We’re all going to slice, hook, chunk, fat, thin, blade, skull, top and three jack but it’s the players who can recover the fastest that often post the best score.

This was on full display earlier in the year at the Genesis invitational in Los Angeles. Max Homa tied for the lead with birdie on the 17th hole and had another 40 inch birdie putt on the final hole to win the tournament outright. With a hometown win, more than a million dollars, years of job security, entry into major championships and much more on the line, not to mention his idol, Tiger Woods standing nearby, he missed the putt and had to go to a sudden death playoff.

On the way to the playoff, he spoke quickly with his wife who reminded him to “forgive quickly.”

That simple advice, which Homa had been working hard to implement in his game, enabled him to move past the miss and focus on the next shot. He was able to make an incredible par from up against a tree on the first playoff hole to win the tournament and all that came with it.

While a few choice curse words may be okay in certain situations, don’t let a bad shot derail your round or sour the mood in your group. With a little forgiveness, and focus, the next shot may just be a great one.

For feedback on this article or ideas for the next one, please contact Chris at cmgarrett19@outlook.com.