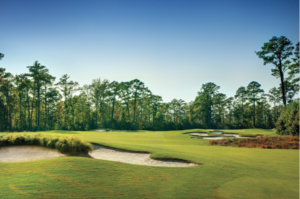 Out is In for 2019 Outer Banks of North Carolina Golf

OUTER BANKS, NC (January 2019) – Those looking for an ideal 2019 golf escape should get ready to bask in Coastal Carolina warmth and sunshine — with a wee bit of influence from ocean breezes. In recent years, North Carolina’s fabled Outer Banks (OBX) have begun to transform themselves into a true golf destination offering an array of courses more closely tied to nature’s coastal elements than most along the East Coast.

“The Outer Banks has everything a golfer is looking for when going on a golf vacation – well-manicured courses, great restaurants, a variety of housing options and unique activities other than golf,” says long-time Kilmarlic Golf Club Director of Golf Bryan Sullivan, a former North-South Amateur champion and an All-American at the University of North Carolina.

Sullivan’s Kilmarlic Golf Club, also boasting a collection of new golf cottages, is a popular Tom Steele design nestled along the marshland of the Albemarle Sound and host course for both the 2004 and 2009 North Carolina Opens. The wonderful mainland course provides a pure OBX layout with water and wetlands virtually in play at all times.

Host to an annual autumn collegiate event, Kilmarlic is also ideally located just five miles west of the bridge that connects the mainland to the barrier island.

“In 10 minutes,” Sullivan says, “I can have my feet in the Atlantic Ocean.”

In terms of its setting, with several holes playing along a rugged coastline Nags Head Golf Links is one of the most exposed golf facilities to the wind along the state’s coast. A Scottish-style course, Nags Head GL is also considered one of the finest. The capricious breezes off sound-side waters create different challenges every time you play it.

Designed by Bob Moore — who clearly followed the adage “don’t mess with Mother Nature” when crafting this gem — the Nags Head layout incorporates the best of links-style golf against a backdrop as dramatic as you’ll find anywhere up and down the Atlantic Seaboard.

The front and back nine closing holes along the sound are particularly spectacular. Nags Head’s bar and restaurant, not surprisingly, is home to the most dramatic sunsets in town, with views not only across the immediate Roanoke Sound, but towards three other sounds (Albemarle, Croatan and Pamlico) that flow into it from the north, west and south as well.

Currituck Club is “sculpted on the type of land where golf began,” says its architect, the renowned Rees Jones, who designed a 6,800-yard masterpiece among 600 acres of dunes, wetlands, maritime forests and sound seascapes. There is, not surprisingly, plenty of water on the course, most of it on the front nine, but unlike Nags Head, most of the water at Currituck Club comes in the form of marsh and wetlands.

Jones is known for moving large amounts of dirt during construction, which is part of the reason his finished product offers a true, championship feel. You won’t find a weak hole at Currituck and the par-3s are particularly stunning, including two that play over water. The best is arguably the signature sixth, located at the hub of the front nine where four holes converge, which plays anywhere from 150 to 200 yards over water, with stunning views of the sound off in the background.

Currituck Club is demanding from tee to green, with undulating fairways that require an accurate tee shot and large, contoured greens that make lag putting among the most challenging elements of the design. Like its OBX brethren, Currituck Club plays longer than its yardage might indicate, as it is designed directly at sea level and is bolstered by constant wind especially along the homeward stretch, where the breeze is almost always in the golfer’s face.

The Pointe Golf Club is located on the rural mainland side of OBX and across the four-lane highway from Kilmarlic. A traditional Russell Breeden design, the course is also said to be the first in the country to have the A-1 bentgrass — a dense, disease-resistant strain — installed across its corridors.

This, of course, is only natural given that the site is a former turf farm combined with rolling farmland. In addition, the management at The Pointe has always devoted itself to providing the finest course conditions imaginable.

The Pointe is also the area’s most player-friendly design and features a peaceful setting with no houses. In fact, it is the only course in the area that is not in a residential community. At a par of 71 with five par-3s, The Pointe can usually be played in four hours, which means more time back at the beach.

Meanwhile, the seventh hole at The Carolina Club is one of the most memorable offerings along the entire North Carolina coast. An island green aged to perfection can create that kind of legend. The 166-yard one-shotter features a TPC Sawgrass-type island green with water, water everywhere. It’s truly an experience to be had.

Still, The Carolina Club is more than a one-hole wonder. As the longest OBX course, it will delight you with liquid challenges that are often compounded by ever-shifting ocean breezes. The Pointe’s sister course features a strong mix of holes with several scenic par-3s (in addition to its signature island green No. 7) and two good risk-reward par-5s to complete each nine.

The Carolina Club’s positioning as the first course heading into town from the north and last one on the way out makes it the ideal play on either side of your OBX golf vacation.

Outer Banks 2019 golf package and travel planning information is available at www.PlayOBXGolf.com or 800-916-6244.