The overall depth of private clubs in the New York and Philadelphia metro areas respectively is arguably the best in the United States and merits acclaim when global locations of note are discussed.

Located approximately halfway between the two large cities is Forsgate County Club. Even though the club is near enough to both the overall awareness and acclaim has been only cited in recent year beyond the likes of architectural cognoscenti. The club derives its name from its founder John Forster, a Scottish immigrant who found business success in America by combining parts of his last name with his wife’s family name — Gatenby.

Created in 1931, the original dairy farmland was turned into a golf powerhouse when the services of the renowned architect Charles “Steamshovel” Banks was hired. Banks left his teaching position at Hotchkiss Preparatory School in Connecticut when the talented engineer turned architect Seth Raynor. was hired to create a nine-hole course at the school. It was Raynor who was mentored under the tutelage of Charles Blair Macdonald — the “father of American golf” and the man responsible for such tour de force clubs such as The National Golf Links of America and the Chicago Golf Club, among others.

The Banks Course follows the distinctive fingerprints that characterize a Banks design. The layout possesses deep sand bottom bunkers. How deep? Some are upwards of 20 feet deep and require the highest level of golf skill to extricate one’s golf ball.  It was because of this feature that Banks derived the name “Steamshovel” because of his penchant to use such machinery to create the fierce bunkers that dot the landscape.

The course also has an array of different green shapes with an array of vexing internal contours. The land was also shaped to provide a wide range of fairway landing areas — sufficient movements creating a range of different stances needed to achieve success.

The quartet of four par-3 holes is often mentioned as being as good as any set of holes in all of New Jersey — and that includes the iconic Pine Valley Golf Club.

The finishing hole caps the round in grand style.

The hole was lengthened in 2007 by architect Stephen Kay and now plays 450 yards from the extreme tee box area. It was Kay who successfully updated the layout — most notably with the penultimate hole — a vintage Biarritz hole. 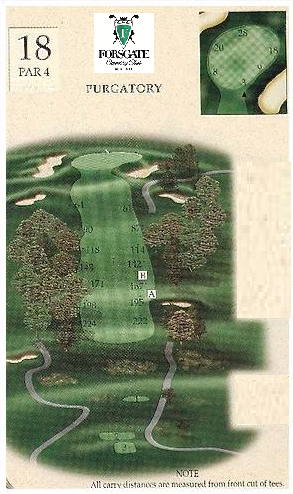 The hole has a slight rise in the drive zone — reaching a pinnacle at roughly 290-300 yards. Generally, the prevailing wind on the 18th during the prime playing season is in one’s face. Those missing too far right or left face a daunting challenge to escape with par as trees and rough await.

The ideal location for a tee shot is getting to the top of the rise which provides a relatively flat lie area before moving steeply downhill and returning to an elevated target. The green is 5,500 square feet and pitched noticeably from back to front. Two bunkers protect the putting surface — one in the rear left and the other situated in the right front. Aptly named “Purgatory,” it is one of the deepest on the course and provides no easy escape for those caught within its clutches.

The hole is framed by the stately clubhouse serving as an exquisite backdrop and is the handiwork of the talented architect Clifford Wendehack who created his unique styles at other notable clubs including Winged Foot, Bethpage, Ridgewood, Mountain and North Jersey CC.

The putting surface provides a worthy challenge for players intent to finish their round in fine fashion. Approach shots going too far will face a daunting downhill pitch. Those hitting the green need to assess carefully what they encounter. Otherwise, three-putts or more can happen for those failing to pay appropriate heed to the speed and direction for the putts faced.

Hole 18 from the Fairway

The 18th at the Banks Course is like an honest judge — no bribes accepted. Make your case clearly and the evidence you provide will determine the verdict in a clear, final and fair manner.