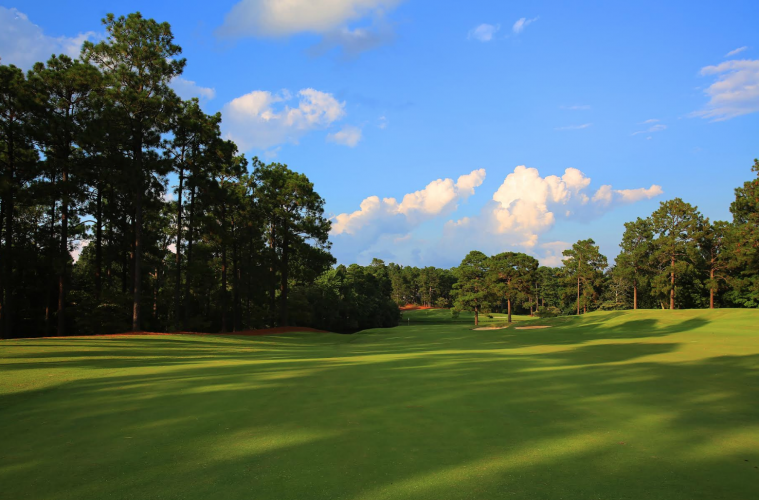 The Cardinal Course is the ‘newer’ of the two layouts at The Country Club of North Carolina in Pinehurst, N.C. It was designed by Willard Byrd and Robert Trent Jones, Sr. and opened in 1970. Revisions were completed by Arthur Hills in 2002. The Cardinal and Dogwood (designed in 1963) Courses will serve as the site of the U.S. Junior Amateur Championship, July 19-24, 2021 and hosted the 1980 U.S. Amateur, won by Hal Sutton, and the 2010 U.S. Girls’ Junior, win by Doris Chen.

While the Dogwood Course may be the better-known of the two layouts at CCNC, the Cardinal still ranks as the 17th-best in North Carolina.

The 15th is a long par 5, more than 600 yards from the championship tee, but with an elevated tee and the downhill slope of the fairway, the green can be reached in two shots with a well-placed drive. The second shot, for players laying up, is deceptive as the open fairway on the right is welcoming, but the long and narrow green is much more difficult to hit and hold from that side.  Bunkers right, a steep fall-off on the left and water behind the green require an accurate approach to hold the green. The green is divided by a ridge, creating distinct front and rear sections, which makes distance control on the approach critical to avoid three putts. Putts within each section of the green are difficult to read on the subtly sloped surfaces.

About The Country Club of North Carolina

The Country Club of North Carolina (CCNC), established in 1963, is a member-owned, gated residential community with 2,000 acres that features longleaf pines and three lakes and upscale tennis, fitness and swimming facilities. The membership is local and national.

Since 2003, it has been a certified member of the Audubon Cooperative Sanctuary Program. The Dogwood Course was designed by Ellis Maples and Willard Byrd and renovated by Kris Spence in 2016. The Cardinal Course, designed by Willard Byrd and Robert Trent Jones Sr., completed a renovation by Arthur Hills in 2002.