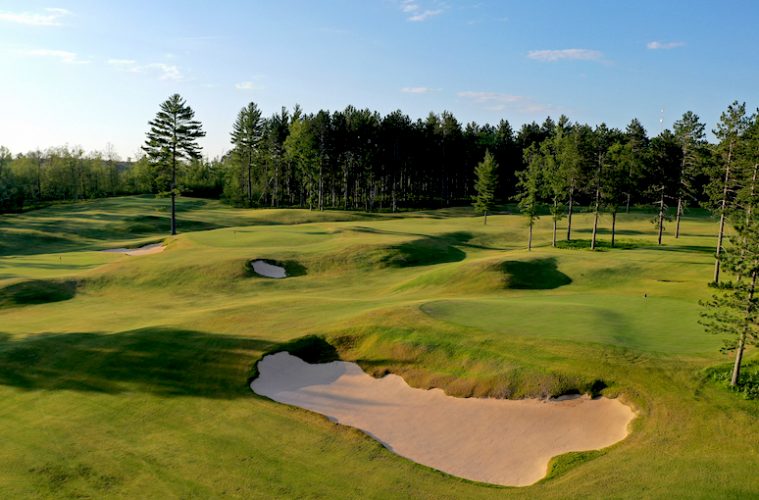 Situated on a peaceful, rolling bulge of land positioned perfectly between The Loop and Forest Dunes courses and near the spacious clubhouse, pavilion, practice area and massive HillTop Putting Course, the Bootlegger, with fun, strategic holes measuring between 65 and 150 yards, is the new focal point and energetic hot spot for golfers of all ages and skill levels.

The Bootlegger was named in homage to the land where Forest Dunes’ award-winning courses now sit. The property was originally owned by automotive magnate William Durant, founder of General Motors and an iconic figure in early 20th century America. As legend has it, a significant parcel of the land was sold to a group of mafiosos (The Purple Gang) in the 1930s.

Known as the Detroit Partnership (if this sounds familiar, they are a central component in Martin Scorsese’s film The Irishman), these mobsters made their fortunes smuggling alcohol from Windsor, Ontario into Michigan—among other less innocuous practices. The Detroit Partnership flaunted their wealth, and perhaps no more ostentatiously than with the construction of the South Branch Ranch, a temple of intemperance that stood on their recently purchased acreage and was regarded as one of the largest ranches in Michigan’s history.

Rhebb and Johns, who helmed the renovation at Orlando’s Winter Park 9 course, built the course in just 81 days. The two collaborating young architects created a course with entertaining shot values and an unintimidating sense of fun.

“We essentially had carte blanche, which was awesome, and really the only way we could get the project completed in time,” says Rhebb. One of the few requests was to make the course playful––a theme that permeated throughout the design process.

“You don’t often get the chance to get super creative when designing courses, but with Bootlegger we really had the opportunity to have some fun with it. Forest Dunes wanted it to be fun and always engaging, and we were able to express that in the design,” Rhebb adds.

The Bootlegger’s creatively designed greens are constructed to funnel balls toward pin locations, improving the likelihood of ever-elusive holes-in-one, while a few tee shots tempt you to make use of strategic slopes and banks instead of flying it in the air. The greens showcase a variety of subtle shapes, many being bowl-shaped and some resembling catcher’s mitts or tabletops. In addition, music will also be incorporated into the fun with 16 speakers strategically placed throughout the course.

A unique feature on the course will be that holes 1 and 10 are crossover holes. “The land gave us such a great canvas to create something fun that offers a ‘welcoming handshake’ to entry-level players and says ‘this is what golf can be.’ Here you can go out in your flip flops and hit flop shots with a few buddies, try to make an ace on every hole, or use a putter off the tee to try and run one on the green,” says Johns.

Not only does the design lend itself to great on-course fun, its routing also incorporates Forest Dunes’ bustling social scene, with the entire first hole and 10th viewable from the pavilion. “The pavilion is the social hub, it’s where music is playing and people are having drinks, so we wanted to take some of that liveliness and put it into play somehow,” Johns adds.

The prime location of Bootlegger will easily entice guests to play it before or after a round on The Loop or Forest Dunes or any time they’re staying on the resort grounds. Music, bare feet and eightsomes are all fair game on Bootlegger. Rhebb and Johns created an experience that will drive new incredible energy and lasting memories for locals and guests.

Home to the celebrated Tom Weiskopf-designed Forest Dunes course and the innovative reversible Tom Doak layout, The Loop, and the 18-hole two-acre Hilltop Putting Course, Forest Dunes offers one of the most complete and unique golfing destinations for golf aficionados and buddy trips. 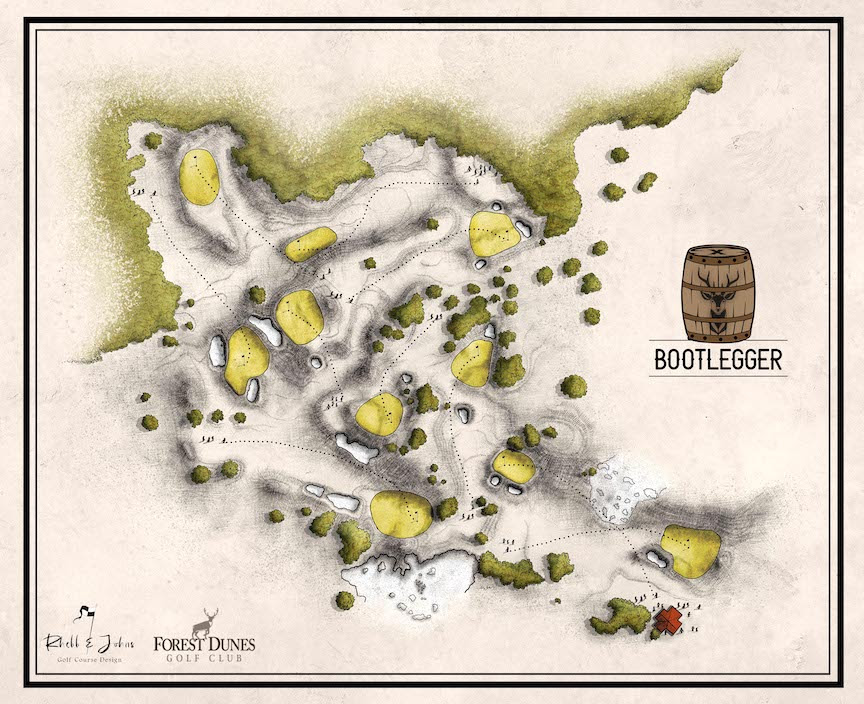 Nestled on 1,300 acres of heavily wooded land within the Huron National Forest, Forest Dunes has become one of the country’s premier golf experiences. In this pristine setting, Tom Weiskopf designed one of his top layouts featuring rugged native dunes, scruffy sand areas and water features. The course has been consistently ranked among the best courses by the leading golf publications. Golf Digest ranks the resort among the Best Resorts in the Americas and GOLF Magazine places it in the Top 100 Resorts. The original Weiskopf course was Golf Digest’s Best New Course in the Country when it opened in 2002, currently ranks it No. 28 among its top public courses. GOLF Magazine and Golfweek have also ranked it among their Top 100 courses. The unique and reversible Tom Doak design, The Loop, adds a second/third Best New Course, and the Bootlegger short course brings an added fun experience to Forest Dunes. In addition, the property features the beautiful Adirondack style Clubhouse with Sangomore’s restaurant, Lake AuSable Lodge with 14-rooms, new golf villas, and cottages.