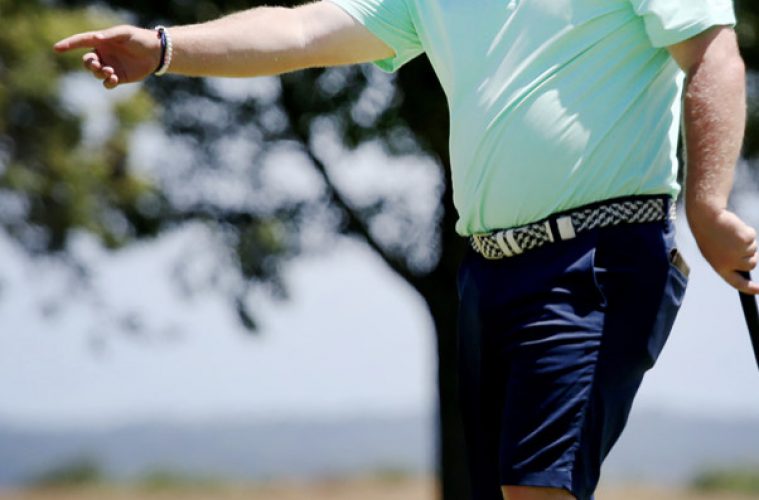 Get to Know Nick Maccario

If athletes truly do need to “learn to win” before they peak, then get ready for a lot more winning from Nick Maccario.

Maybe you’ve already heard of Maccario. He was one of the hottest amateur (non-professional) golfers in the region in 2020, racking up an incredible run of top three finishes before breaking through for a win at Plymouth Country Club’s Hornblower Amateur. And recently he was named the 2020 Richard D. Haskell Player of the Year by MassGolf.

As an amateur golfer, Maccario doesn’t get paid to play golf but instead has a full time job and plays and practices when he can, just like many of us avid golfers. The only difference is, when he plays, he plays better than most amateurs in New England!

In fact, he’s competed in four amateur or mid-amateur events and has finished in third place or better in four of those, including runner-up finishes at the Massachusetts Amateur Championship (The Kittansett Club), the New England Amateur Championship (Concord Country Club) and the Francis Oiumet Memorial (Franklin CC, Woodland GC). As mentioned previously, this incredible run was punctuated by a victory at the Hornblower Amateur.

Maccario told AmateurGolf.com: “Everybody has their week. “You just have to wait until it’s yours.” That level of humility and patience is something every golfer can take to their own game.

Favorite golf course in New England:
I’m going to have to have two picks (sorry!): Essex County Club and Wannamoisett CC in RI

What’s your favorite hole on the South Shore and how do you attack it?
I don’t play many courses in the South Shore, I’ll be honest, but if I had to choose one… I would call Kittansett (Marion, MA) one of them. The fourth hole is one that is a hard dogleg right where a lot of players lay up to the left side and have 8-PW into the green. I always chose to go over the trees because there is a hole just like it at my home course and it just fits my eye. It might not be the smartest play, but it worked out well for me during the State Amateur this past year (note – Nick made par or better in five of the six rounds he played the fourth hole at Kittansett during the Massachusetts State Am).

Favorite golf memory of 2020
Winning anytime is great but it’s especially great when you can do something as part of a team. Making birdie in our playoff hole to qualify Mike Calef and myself for the 2021 U.S. Amateur Fourball Championship (note: May 22-26, 2021 at Chambers Bay GC) was definitely a highlight.

Most memorable shot in your career
So, in 2013 or ’14 I got into my first Francis Ouimet Invitational by way of being friends with the late Dick Foley. Mr. Foley had been family friends with the Murphy’s of Garrison Golf Center in Haverhill forever. On the 17th hole at Dedham Golf and Polo, Mr. Foley was watching in a cart and I made my first hole in one from 188 yards and he signed off on the scorecard. I still have. It’s a great way to remember him.

What’s the strongest part of your game?
Putting

What part of your game are you working to improve?
40-80 Yard Wedge Shots

What golf club do you feel most comfortable with?
Putter

Why is getting fit for golf clubs important?
The biggest misconception is that getting fit is only for “good players”. Totally wrong! I think understanding your swing and your clubs no matter your talent or handicap is very important. One simple change with a shaft can totally change your trajectory and then also your confidence. Get Fitted!

What’s one tip/swing thought you would share with amateur golfers?
Always try to slow down. I always think that, for a lot of people, their tempo speeds up during a round, and/or when they get excited. I always trying to swing shorter and slower to make more consistent swings.

How are you keeping your game sharp during the winter?
The situation with COVID has obviously complicated things. But I’m fortunate enough to work from home (wherever that is) during all of this, which helps with practice. I also have family in GA, SC and FL so I have been bouncing around and trying to practice anywhere I can about 3-4 times a week.

What have been your most recent competitive events and how did you prepare for them?
I played the Jones Cup Invitational in Sea Island, Georgia February 4-7 and then the Gasparilla Invitational in Tampa two weeks after (finished T3). I was working a lot on the tee ball because both courses require you to play from the fairway if you’re going to be successful.

You’re really good at golf. What’s something you’re not good at?
Singing. If there was one skill I wish I could have it would be singing.

If you could pick one historical event to witness, what would it be?
This is WAY too hard of a question. I would say that if it had to do with golf, I think it would be cool to see the shot heard around the World by Gene Sarazen at Augusta (note – Gene Sarazen holed out his second shot on the par 5 15th hole for double eagle during the final round of the 1935 Masters Tournament, which he would eventually win in a playoff).

If you have any comments on this article, or ideas for future stories, please contact Chris Garrett at cmgarrett19@outlook.com.