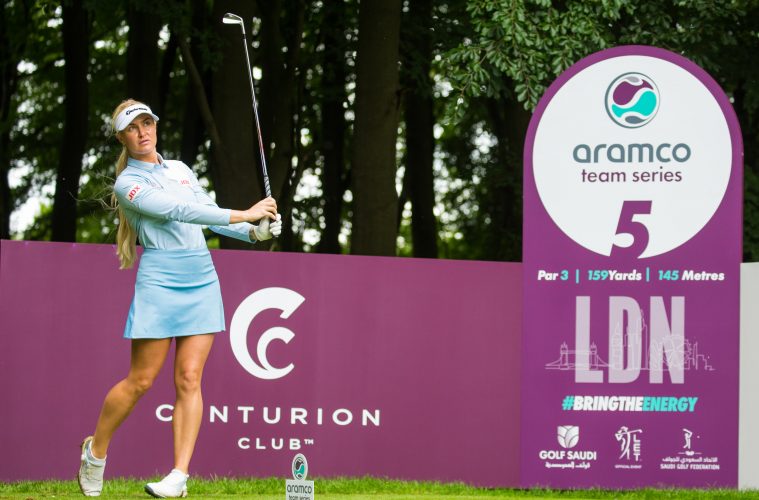 The Aramco Team Series continues to prove a big draw for the world’s leading golfers as the LET today reveals a raft of international star-players heading to Sotogrande, Spain, for the second of its four $1million tournaments.

They will be joined by their 2019 hero captain Catriona Matthew, with the Scot set to use the Aramco Team Series – Sotogrande’s unique team format to run a keen eye over some of her key players ahead of September’s rematch with the US.

Hall, the 2018 AIG Women’s Open winner who finished fourth in the inaugural Aramco Team Series event in London, said: “I loved the experience in London. Outside the Solheim Cup it’s rare to have an opportunity to play team golf – so not only is this a fabulous innovation for the Tour that’s exciting to continue to be a part of, but it’s also another great opportunity to impress the captain!”

Representing the States in the Aramco Team Series – Sotograndefield will be 2021 KPMG Women’s PGA Championship runner-up and four-time US Solheim Cup player Lizette Salas, who will face stiff competition, with fellow American Alison Lee also in the field, plus Thailand’s Moriya Jutanugarn, the 2013 LPGA Rookie of the Year, and 2018 LPGA Rookie of the Year, Lindsey Weaver, both competing.

Each Aramco Team Series tournament sees 36 captains lead teams of four players, who together compete to shoot the lowest combined score over three days of golf.

All teams feature three LET players paired through a uniquedraft system, in which captains choose one player and are randomly assigned another. The fourth member of each team isan amateur golfer – a position open to all golfers in Spain for the Aramco Team Series – Sotogrande through the tournament’s world-first Team Up competition.

That means it could fall to an amateur golfer to hole an LET tournament-winning putt to secure prize money for the professional players, a feat unique to world golf.

Marianne Skarpnord of Norway sank a 12-foot putt on her final hole to win the individual competition, her fifth Ladies European Tour title, will also play in the Aramco Team Series – Sotogrande.

She said: “It was awesome to win and go down in history as this tournament’s first ever winner. London was so much fun so I already can’t wait to do it again in Sotogrande next month.

“Events like the Aramco Team Series go to prove that so much great work is being done to elevate women’s golf, so I know I the opportunities I have available for these magical moments are only growing, which is fantastic – and great to be a part of.”

The Aramco Team Series – Sotogrande will take place from August 5-7 at La Reserva Club, near Marbella. The tournament will adhere to COVID-19 protocols, as well as local and government guidelines.