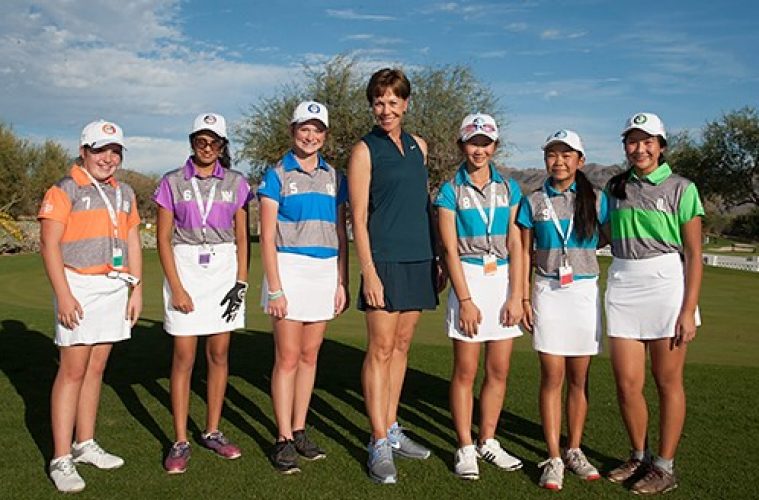 Suzy Whaley and Seth Waugh are two PGA of America golfers who are at the top of their games. Suzy’s game is leading the 29,000-member organization as its first woman President. Seth’s game is managing the overall operation as the fourth CEO in its history. Both games began late in 2018, and the Whaley-Waugh twosome has already had a significant, positive impact on the PGA of America.

And their games will only continue to get better, enhancing both the careers of the PGA Professionals and the experiences of millions of amateurs.

What Suzy Whaley Brings to the PGA of America Top Spot 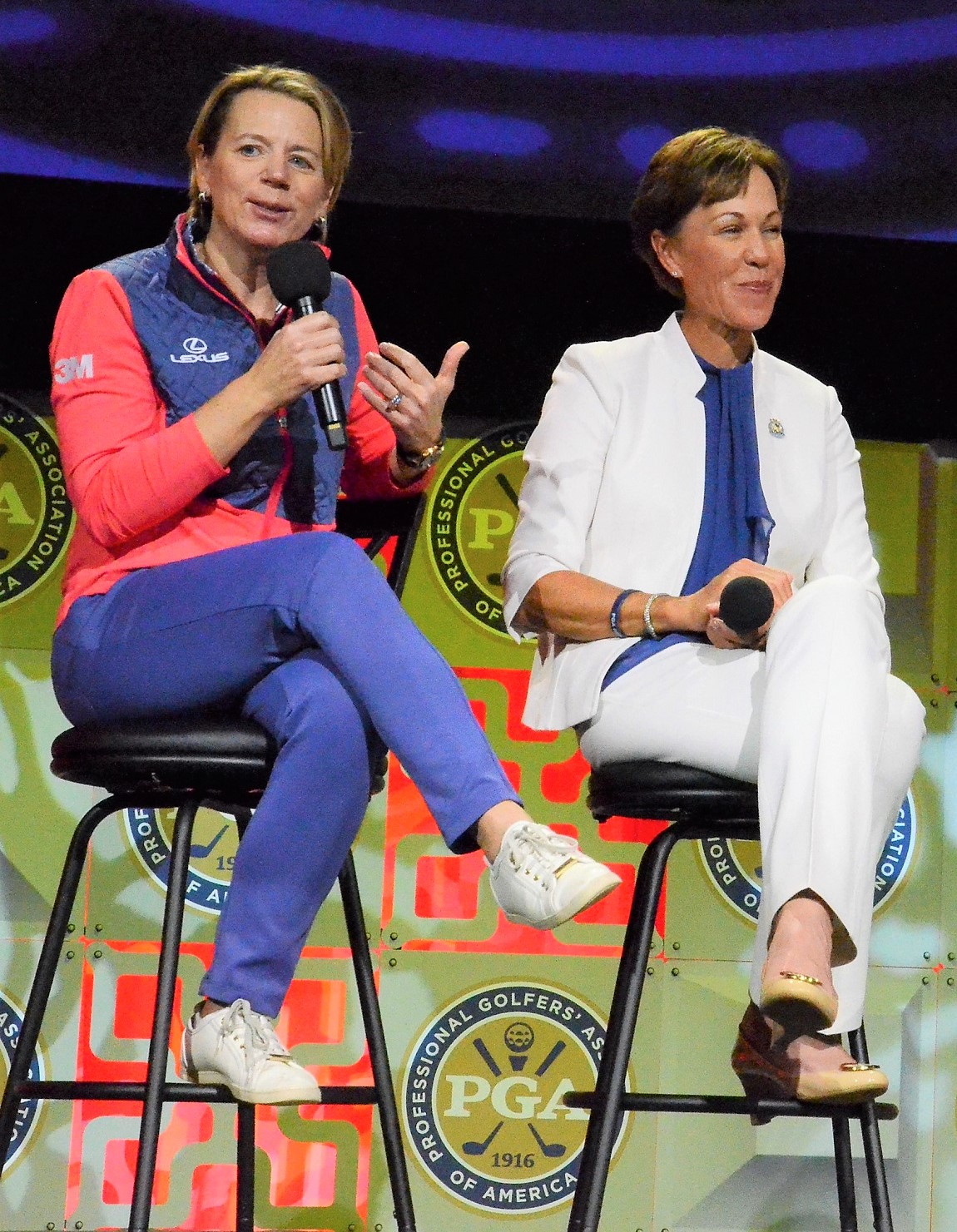 Suzy Whaley and Annika Sorenstam were impressive speakers on growing the game at the January PGA Merchandise Show in Orlando. Whether Suzy is communicating with adults about improving the game or working with juniors as she is in the featured photo with PGA Jr. League members, she is always committed and passionate about the future of golf.

Whaley’s climb to the top spot, to which she was inducted last November, has been well documented and well deserved. Her background—UNC golf team, LPGA Tour and LPGA member, PGA head pro and Master Professional, ESPN analyst, entrepreneur of Suzy Whaley golf, coach, teacher—has prepared her well for this extremely daunting leadership role.

At the PGA Merchandise Show in January in a media briefing, Whaley said, “I am a PGA Professional. My husband is a PGA Professional. We love the game of golf. So, for me to represent the 29,000 of us who share that same feeling is certainly an honor. I have an ambitious agenda. For one thing, I don’t think we promote our members as well as we should, and I don’t think we share enough about our Professionals. I want the employers of PGA Professionals to understand the rigorous training that our members have encountered: 800 hours of education, then a certification program, and our Master Professional program that goes beyond the certification.

“I have been a part of the governance of the PGA of America in its committees since 2004, at that time with the Connecticut section. [She lives in Cromwell, home of TPC River Highlands and the Tour’s Traveler’s Championship.] I’ve always enjoyed working together and sharing visions to create better lives for our members, especially with regard to remuneration, benefits, health care and education.

“I also enjoy getting clubs into people’s hands. Growing the game for me is something that I am incredibly passionate about, especially with beginners, women, children, and minorities. That 2.6 million new golfers have taken up the game in the last year thanks to the many initiatives that all the professional golf associations have been adopting has been most gratifying.”

Why Seth Waugh Is the Right Choice as CEO 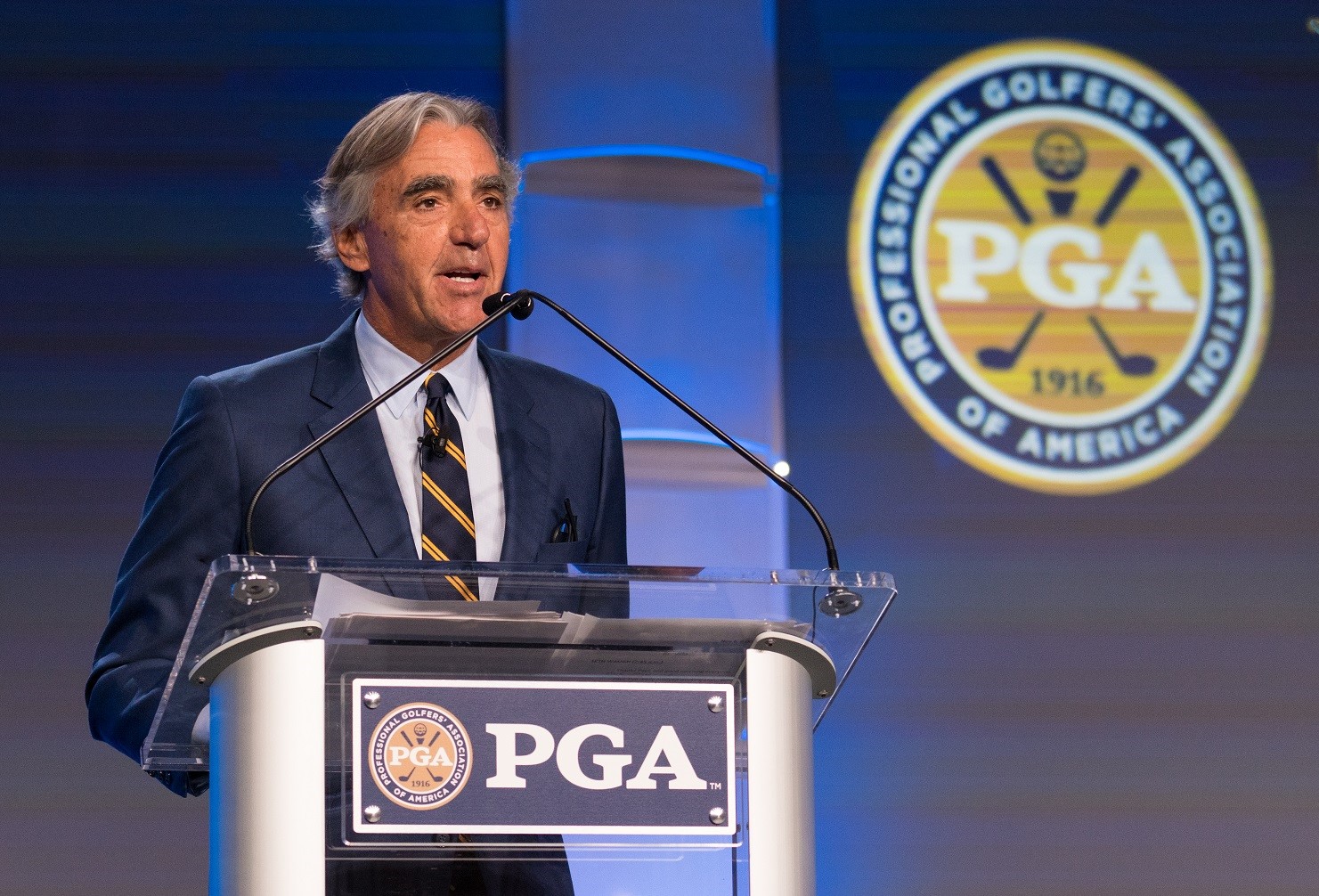 Seth Waugh left his lucrative position as Managing Director at the investment firm Silver Lake to become CEO so that he could give something back to the game that he loves.

Waugh, a single-digit handicapper in his own right, will long be remembered and praised in New England for his 14-year run with the FedEx playoff Deutsche Bank Championship at TPC Boston when he was CEO of Deutsche Bank Americas. When that run ended in 2016, Waugh joined the PGA Board of Directors for a three-year term. However, CEO Pete Bevacqua suddenly left the PGA last August to become President of NBC Sports Group. PGA President Paul Levy, with the entire Board’s blessings, immediately prevailed upon Waugh to leave his lucrative position as Managing Director at Silver Lake, a global leader in technology investing, to replace Bevacqua in September.

At the same PGA Show media briefing, Waugh, who graduated from Amherst College with a dual major in economics and English, explained his decision. He said, “Just like Suzy and her husband Bill [currently Director of Golf Operations, PGA Tour Golf Course Properties], I love this game, and I want as many others who play it to have fun and to be happy on the golf course. I saw an opportunity to give back something to the game and to try to make things better for the professionals and the amateurs. That has always been a driving force with me and makes me feel good. Paul Levy asked me to serve and to make a difference. I’m glad that I accepted.”

Waugh’s business and organizational acumen instantly came to the fore. He had to oversee the Ryder Cup competition in Paris, France; he had to confirm a multi-million-dollar, 11-year TV deal with CBS and ESPN that begins in 2021; he had to check, approve and announce the details of the PGA’s headquarters move from Palm Beach Gardens, Florida, to Frisco, Texas; and he had to swear in the first woman President of the PGA of America.

What Whaley’s Immediate Impact as President Has Been 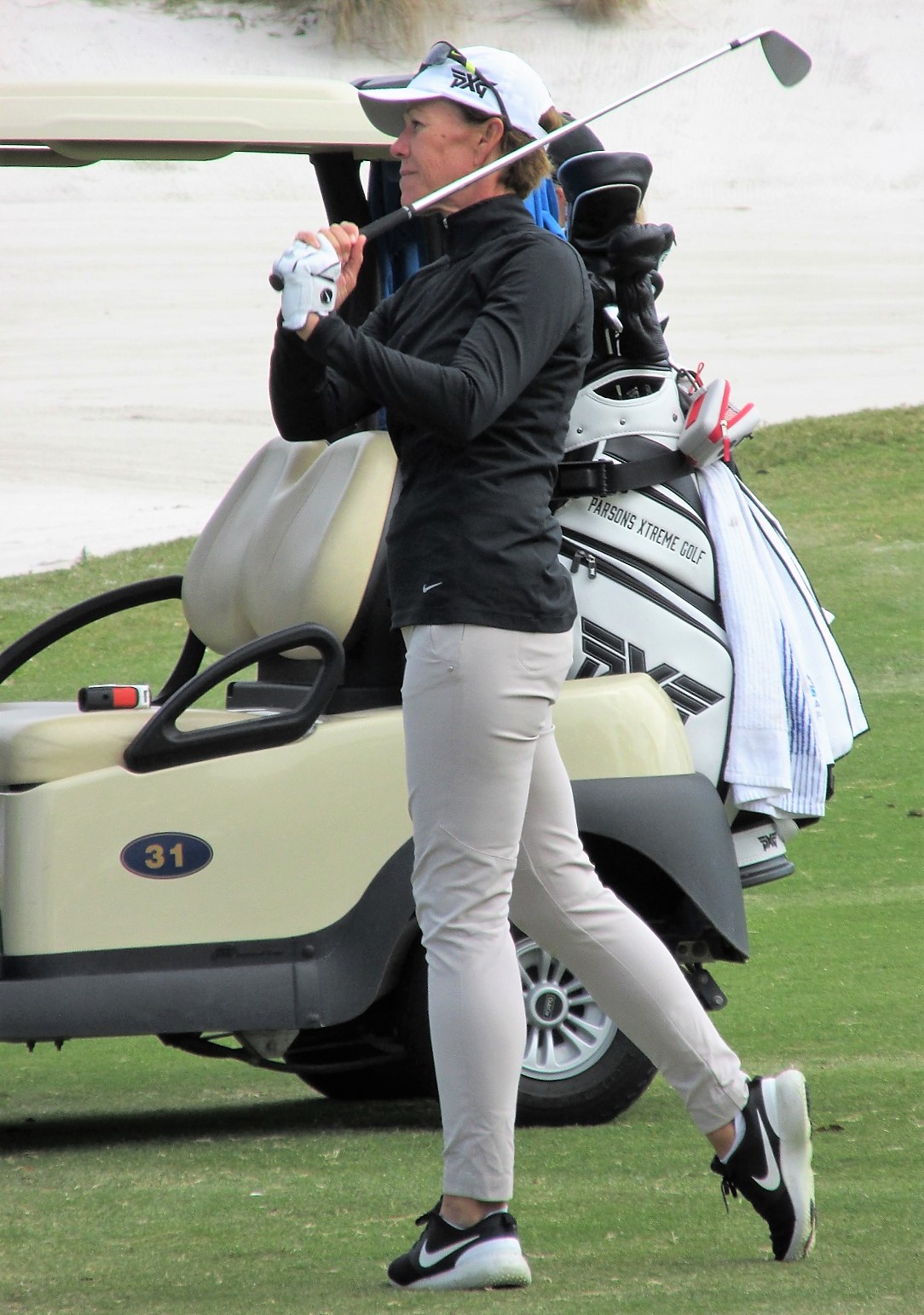 Suzy Whaley played on the LPGA Tour in her younger days and still tees it up with club pros when she has the chance, but teaching and coaching are now the mainstays of her professional career.

Suzy Whaley, who majored in economics at UNC before she took her shot at the LPGA, used her governance committee actions to reach the next level in 2014 when she was elected by the membership as Secretary of the PGA. She said, “I didn’t run for Secretary because I’d be the first woman in that position. I ran because I am a proud PGA member who has the ability, experience, and the relationships.” Two years as Secretary and then two years as VP prepped her for the leading role.

And Whaley’s leading role is to be seen AND to be heard. She has literally become the face of the PGA of America, and she has used her platform to speak her mind. She was ubiquitous at the PGA Merchandise Show, spending as much time as possible both in talking with her membership on the floor about their concerns and in joining panel discussions on the main Forum Stage.

Whaley and Waugh opened the Show at the Orange County Convention Center in Orlando, Florida, alongside military veterans and PGA HOPE coaches from around the country. PGA HOPE (Helping Our Patriots Everywhere) provides veterans with an opportunity to learn the game from PGA Professionals as a form of therapeutic rehab. Then Whaley joined Annika Sorenstam on stage to discuss “The Future of Coaching”—the way coaching is evolving and what the PGA is doing to help grow sport participation for a lifetime.

Shortly thereafter, Whaley sat with five other influential women from We Are Golf and the LPGA Women’s Network to describe the effects of the 2018 August launch of #inviteHER, a nationwide campaign encouraging golfers to extend an invitation to a woman in their lives to play golf. Whaley said, “I am passionate about inclusion. I want to get more women on golf courses and more people of color on golf courses. And we are going to take intentional steps to do that.”

Whaley espoused other initiatives throughout the week of the PGA Show. She said, “PGA Jr. League is very popular, and I want to make it even more so. It has grown from 5,000 to 50,000 participants in only a few years. Drive, Chip & Putt and the First Tee are remarkable trendsetters. We have developed PGA.Coach with the LPGA and PGA tours, USGA, Augusta National and the United States Olympic Committee to define seven stages of golf based on long term athletic development. And I will captain in October the United States team in the inaugural Women’s PGA Cup, a first-of-its-kind team competition for women PGA members from around the world.”

In addition, Whaley hopes to be the playing captain on the five-person team. Her game is still solid, and she still thrives on competition. She played twice in February in the PGA of America Winter Championships at PGA Golf Club in Port St. Lucie, Florida. Playing with many other snowbird professionals from around the country, Whaley and her partner Brittany Kelly from Indianapolis, Indiana, just missed the final round cut by one stroke in the Senior-Junior Team Championship. Then Whaley shot 77-70-76 for a T-11 in the Women’s Stroke Play Championship and cashed a $320 check for her efforts.

Why the Whaley/Waugh Connection Will Improve the Game 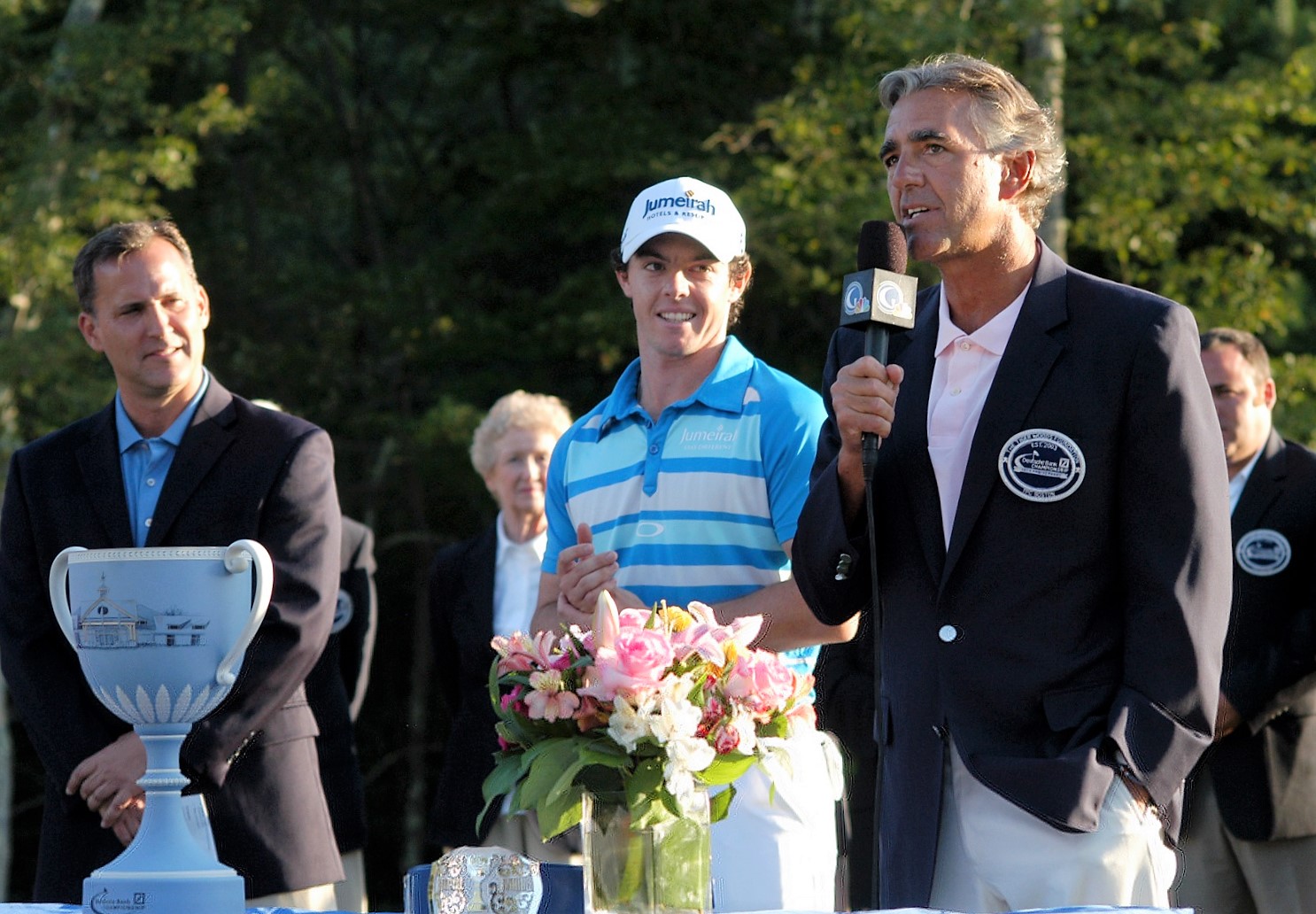 Seth Waugh will long be remembered by New England golfers for both bringing the PGA Tour to TPC Boston for the FedEx playoffs and for making the Deutsche Bank Championship as successful as it was. Here he honors 2016 champ Rory McIlroy at the presentation ceremony while NBC and Golf Channel analyst Steve Sands looks on.

Seth Waugh, who is most comfortable behind the scenes as he makes decisions and formulates policy, said, “Suzy has just incredible energy and presence. She understands what makes PGA Professionals special and what they need to be successful. When she became the President last November, I was very pleased to be on her team and part of that partnership. She is a genuine leader. I know that what Suzy and I and the Board will be doing will impact our 29,000 members and will make their lives better and, as a result, also make golf more enjoyable for the players who depend upon the PGA of America to help run the game.

“When we met in our official capacities that first time in November, I asked Suzy what ideas she had for her presidency. She said she would get back to me. The next morning at 6 a.m. I looked at my emails and had one from Suzy that she had written at 4:15 a.m.! She had included 44 items for me to consider, and what’s more I liked her suggestions all the way through. And from that initial meeting and that initial email, Suzy and I have been working closely together and extremely well together.”

And once again, their games will only continue to get better.

(Photographs courtesy of the PGA of America)