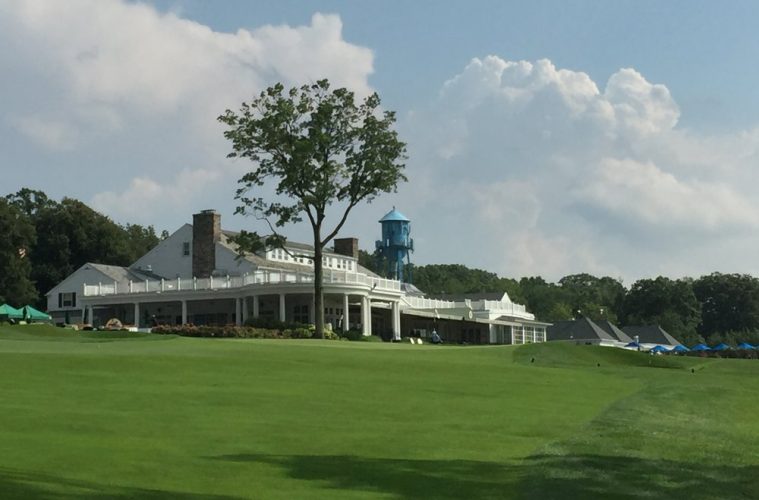 A number of clubs– particularly on the private side — throughout the USA but most notably in the greater New York metro area have seen fit to upgrade their facilities — especially on the golf front. The pandemic caused a temporary spike in overall play and the various clubs that are engaged in this effort are doing so to bolster the loyalty of existing members and to draw the interest of prospective new ones.

This is the first of a series that will go into depth on how such matters are proceeding.

The first club being profiled is Montclair Golf Club — one of the oldest in the USA and dating back to 1893. 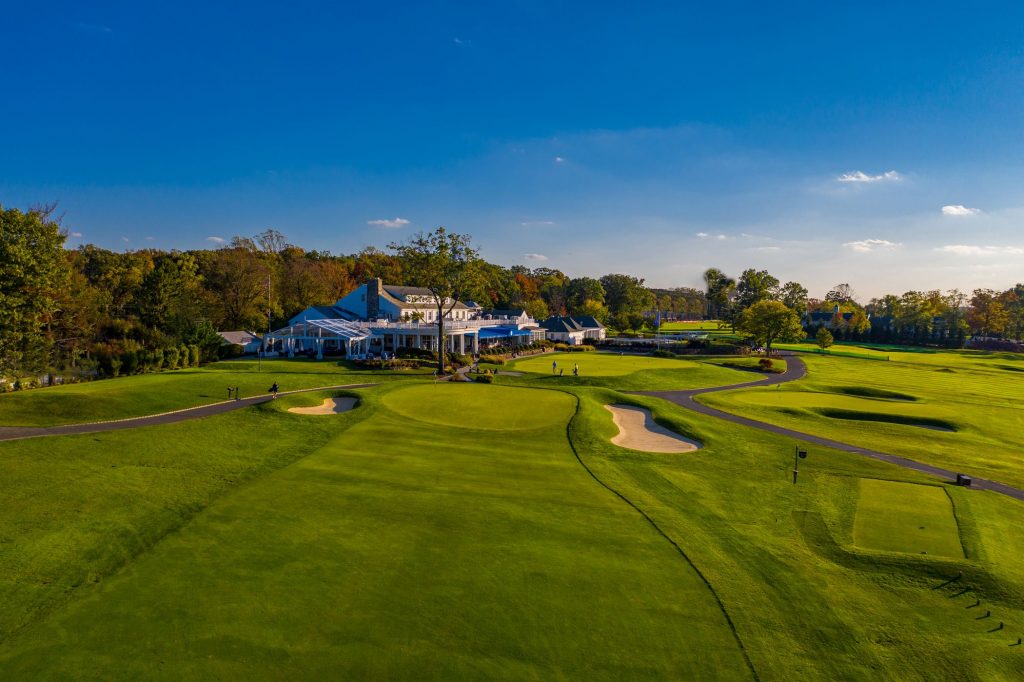 1st & 3rd Nines
West Orange, NJ
Architect: Donald Ross with recent updating by Brian Schneider
My familiarity with Montclair Golf Club goes back to my time playing the course during my high school years. I was always enthralled with the massive elevation change — over 250 feet from the club entrance on Prospect Avenue all the way to the other side with the border with Pleasant Valley Way.

The club is blessed to have 36 holes of golf — 27 by Donald Ross and the 4th nine by Charles Banks. I was present when the 1973 Women’s Amateur was played there as well as the 1985 U.S. Amateur 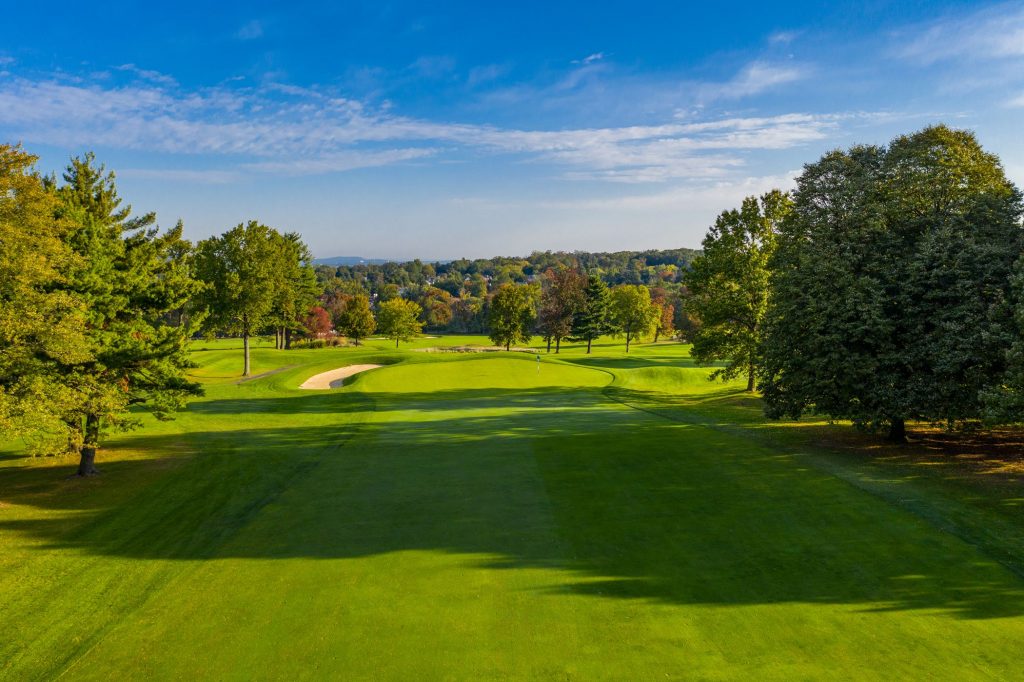 The topography plays a major role at Montclair and the greens are the central defense for all of the different 9-hole combinations.
The 1st and 3rd nines had drifted over time from the core Ross philosophy and the hiring of architect Brian Schneider from Rennaissance Design has clearly been a major plus with the effort looking at historic aerial photographs — the oldest from 1930, to guide the effort.
The most noted improvement came with a new par-3 — at the 5th on the 1st Nine. The original hole was rather non-descript — going uphill and being rather ordinary. The club wanted to add a chipping practice area and the wherewithal to create a new hole was put into motion. The new hole espouses the Ross look — plays somewhat uphill but not as abruptly. The green is perched above the tee and there is a major fall-off to the right side. Flanking bunkers are also included and need to be avoided. Is the new hole a better hole? In my mind — yes. 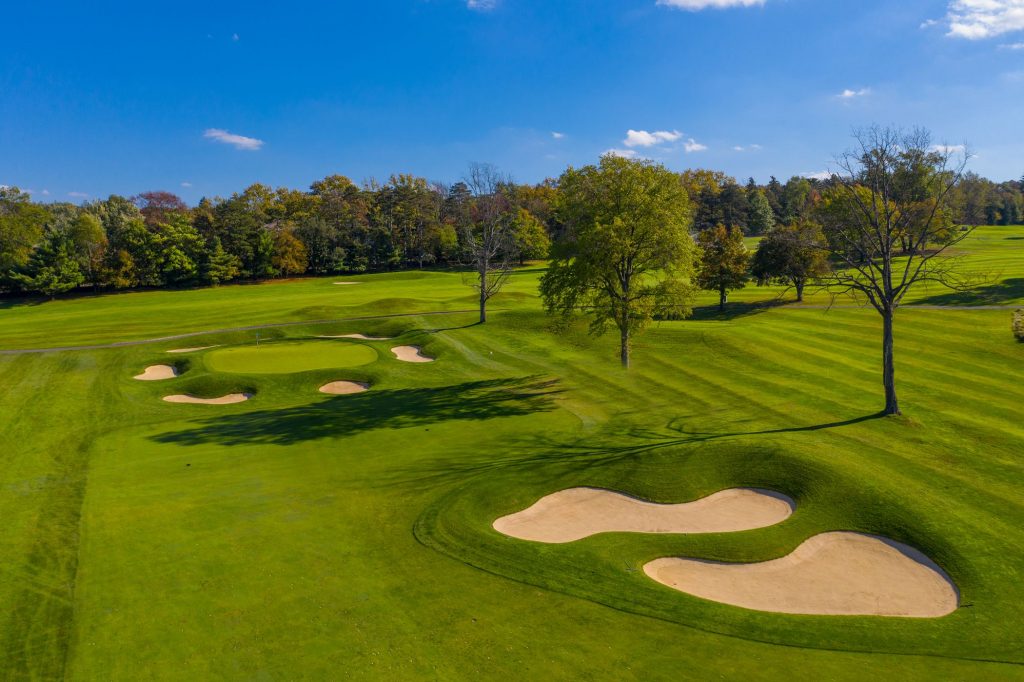 The 1st Nine is cloistered rather snugly in a section of the property. The opening hole is rather benign and when you reach the 2nd — you descend rather noticeably. Originally, the 2nd was fairly straight — years ago the hole was changed to become a dog-leg left and giving the club more room for its present-day practice area.
One of the more demanding holes comes with the uphill par-4 4th. The hole is listed at 420 yards but it takes two quality shots to get to the green. There’s nothing complicated with the hole — it just mandates sound execution.

The par-5 6th works back down the hill — there’s also a split with the fairway and players have to decide whether the risk is worth the effort in attempting to get to the bottom of the hill on the far side. Two fairly simple holes follow before one concludes the side with a stellar par-4 at the 9th. The hole turns left in the drive zone and the need to find the fairway is paramount. The fairway tapers down considerably as the lengthy tee shot attempts to get as far up the fairway as possible. The green is ably protected by bunkers on both sides and has a number of internal movements that require a keen eye to decipher. 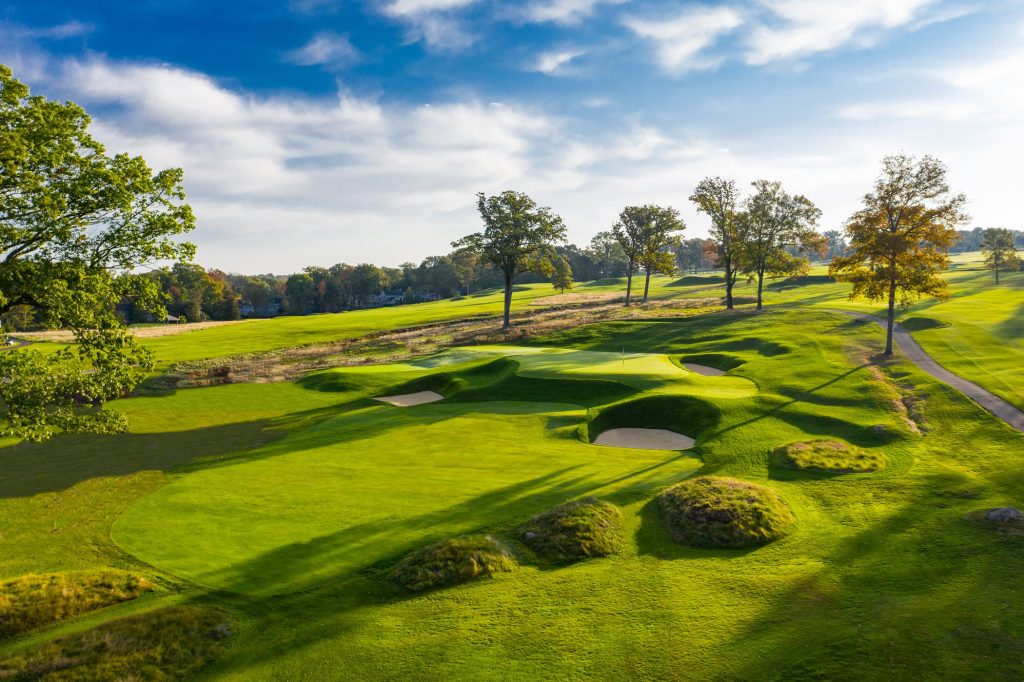 The 3rd Nine is where much of the remedial work has been carried out thus far. One of the elements first time visitors to Montclair now will not fully appreciate is how so many unnecessary trees were planted over the years. The clutter was beyond reason and frankly was compounded by a turf program at that time which routinely overwatered the landing areas. The truest golf at Montclair only comes when the turf is firm and fast allowing the ground to clearly be a factor when playing.

In addition, the vistas one now receives when standing at the clubhouse have truly added to the enjoyment when traversing the property. More tree work is planned for the work on the 2nd Nine that is happening this year and when work commences on the 4th Nine in ’22.

The key work at the 3rd Nine included redoing the bunkers and rebuilding four greens at the 3rd, 5th, 6th and 9th holes. The ones that were not done are being recontoured along the perimeters to regain lost pin positions. Teeing areas have also been built — most notably at the par-5 6th which goes from 508 yards to over 550 now — with the bulk of the yardage going uphill. 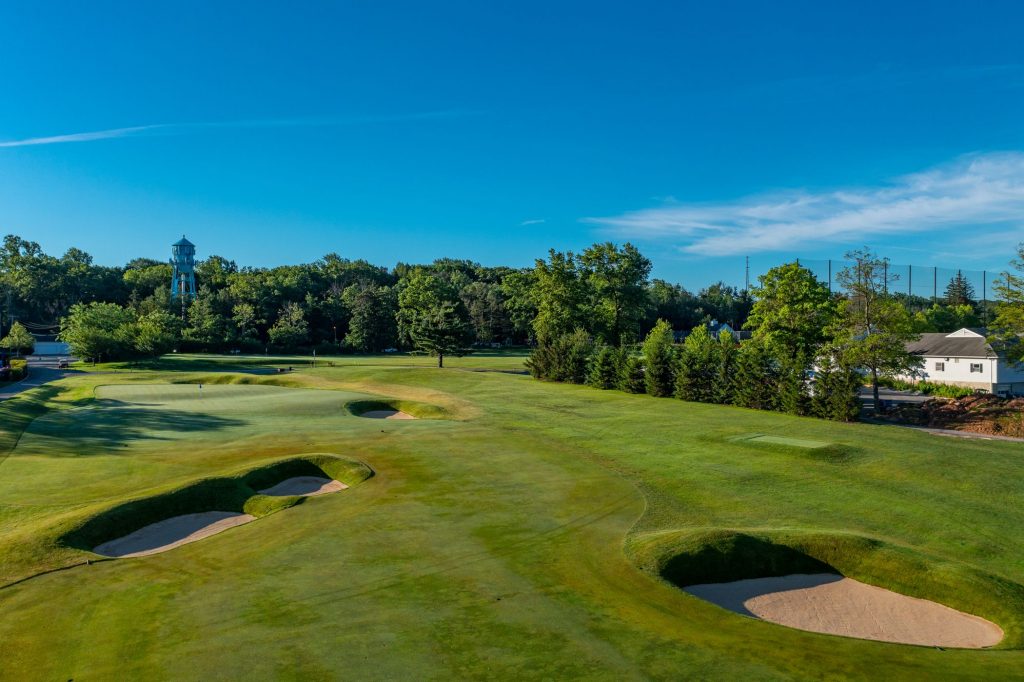 The start of the 3rd Nine features a downhill tee shot but players have to ever mindful of a fairway that narrows as you near 300 yards with heavy rough grass that pinches in from that side.

Few holes have been more positively impacted by tree removal than the 2nd on the 3rd Nine. Previously, players hit through a narrow slot and there was much underbrush to the far-right side. That is now gone and the benefits are enormous. The clarity presented when you step on the tee is striking. The green is also free of any surrounding clutter and the approach to the elevated target must be played from a sidehill lie which clearly is testing.
The par-3 3rd has made a major improvement. The new green is a major improvement and the challenge to get near to the flagstick is a daunting one as the shot must reach a challenging uphill target.
The short downhill par-4 4th is rather pedestrian from the tee but the approach is anything but. The shot must cross the Peckman River and the green has plenty of internal movements that command one’s attention with the flatstick. 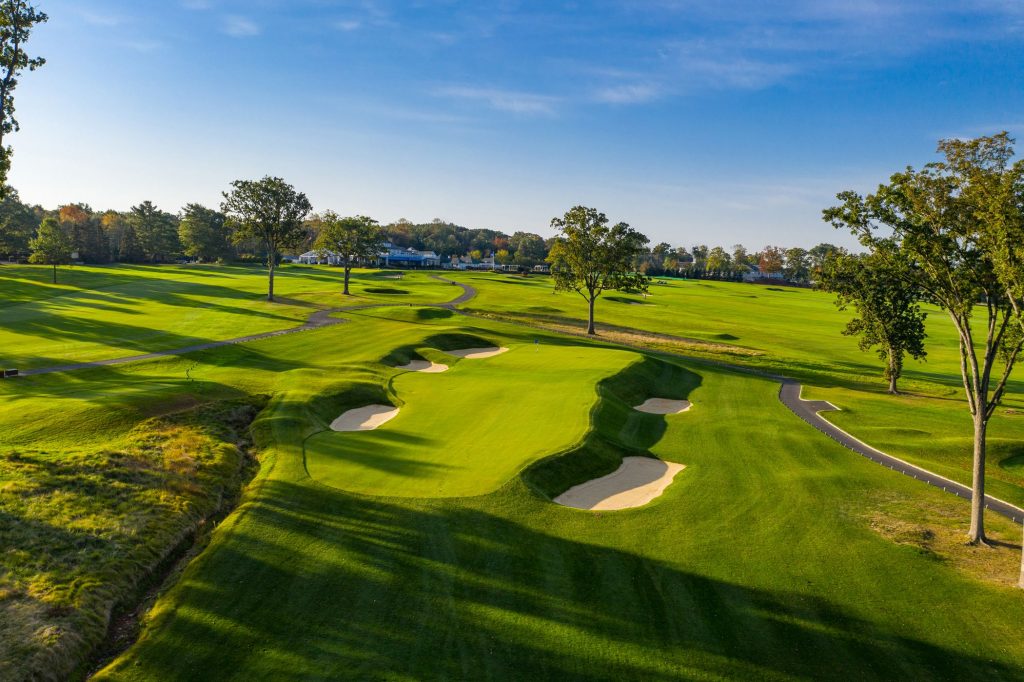 The main issue for the 3rd Nine comes with the par-4 6th. The hole turns right and the aforementioned Peckman includes a serpentine connection. In times of heavy rain, the river has risen beyond its banks and the result has been a nightmare for the club to deal with. It will be interesting to see how this matter is resolved.

Fortunately, the greensite is not impacted and the newest creation is simply glorious — sitting above the fairway totally free of the inane clutter that previously surrounded it.

The par-5 6th, as earlier mentioned, has been wisely lengthened but the real improvement comes with the new green. The previous putting surface was nightmarish — anything above the hole could easily run off the front of the green. During U.S. Open sectional qualifying a number of PGA Tour players soundly critiqued the hole because of the situation described. The new green is smartly done and those attempting to reach the target in two shots had best hit their finest of plays because the green is fortified with a major fall-off to the center and right-side areas. 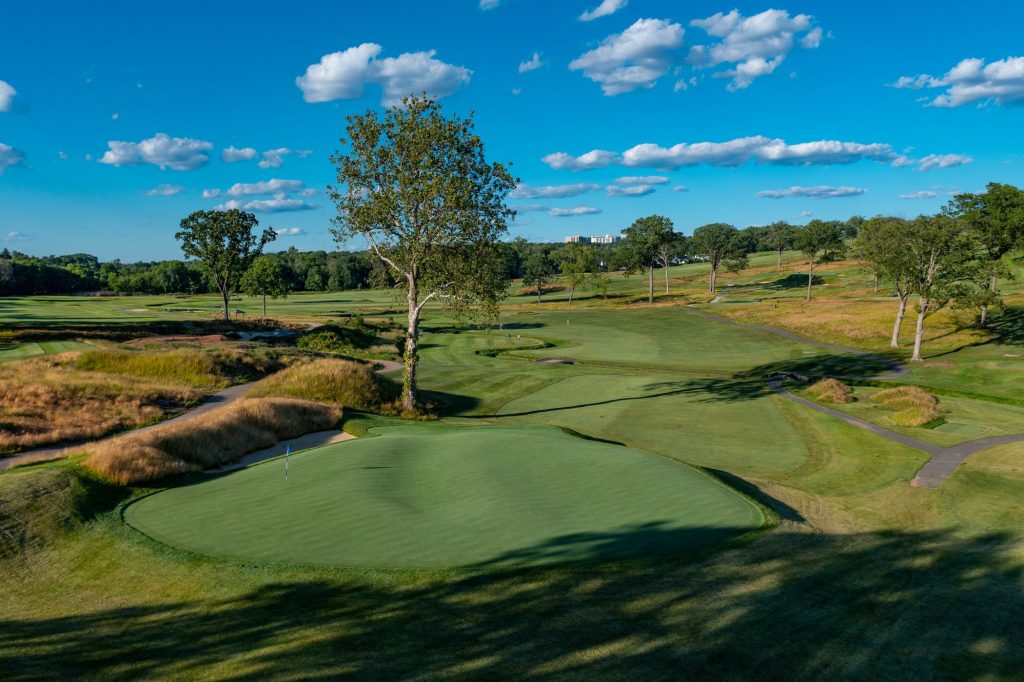 The downhill par-3 7th has also been improved by enlarging the green and thereby provide for added pin locations. The uphill dog-leg left par-4 8th has been bolstered by the removal of countless trees that simply provided for interference from the protruding canopies.

The final par-4 climbs uphill to the clubhouse but the major improvement comes with a new green that works in total harmony. The previous green was simply out of character and needed to be eliminated. That’s strong medicine but the kind that makes a major difference when players exit the green and have a memory that lasts rather than one they want to quickly forget.
Those who finish golfing at Montclair will undoubtedly concur with what Bobby Jones said after his round there as the “longest short course I ever played.”  Total length for the 1st and 3rd Nines is under 6,600 yards. The terrain plays a major role and the commitment from the club to harken back to its original roots is most welcomed. The landscape effort alone has certainly improved the overall optics and it will be interesting to see how things turnout with the 2nd and 4th Nines. given the tie to Ross and Banks respectively.
Standing still is not an option and the West Orange-based club deserves considerable credit in having a senior leadership team in place and in bringing on board a skilled architect to reinvigorate a layout with a rich history and what now appears to be an even brighter future.