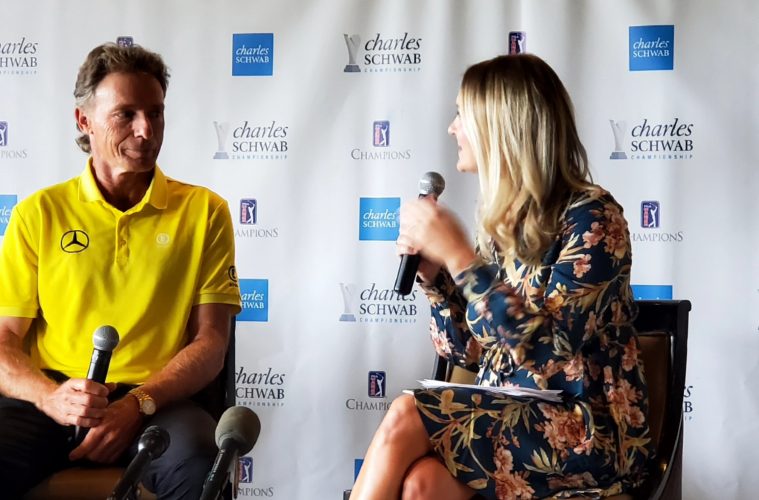 Golfers around the world recognize the Waste Management Phoenix Open by various names throughout history including “The Greatest Show on Grass,” but there is a legendary show played on the original Phoenix Open venue, Phoenix Country Club that doesn’t disappoint. The Charles Schwab Cup Championship (CSCC) is the season-ending event on PGA TOUR Champions and a first-class tournament for players and fans alike.
Tiffany Nelson applies her many years of experience at TPC Scottsdale’s Phoenix Opens to the CSCC as Executive Director. At Media Day she introduced Miller Brady, PGA TOUR Champions President, Charles Schwab and Phoenix Country Club execs as well as defending Champion Bernard Langer, interviewed by Jessica Marksbury of Golf.com who also happens to be married to Paul Griffin, Phoenix Country Club’s Head Pro from Cork County, Ireland.

Bernard, a 40-time PGA and five-time Charles Schwab Cup winner talked about staying fit and still being nervous in competition. He believes you don’t want to shake out of your boots, but some adrenalin is good. He shared the story of when he had a 2-shot lead in the Irish Open and thought about what he would do with that money and what would he say receiving the trophy. Three holes later he was not leading. Does he gamble? “Every time I pick a club it’s a gamble.” He pointed out how increasingly difficult it is on the Champions Tour as great PGA pros cross over the 50-year age mark. He noted that next year Phil, Ernie and Furyk will come on board. Tens of thousands of pros around the world want to make it but there are only 78 slots.

One veteran Champion who is always a contender and local to Phoenix is Tom Lehman. This month he will be inducted to the Arizona Golf Hall of Fame and in conjunction with the CSCC, he will host a gala and tournament with Anne Meyers Drysdale and other sports celebs to raise funds for Elevate Phoenix, a program to mentor kids.

Coinciding with Veteran’s Day, all active duty and Reserve, military retirees, and their dependents receive free entry all week. Military ticket includes access to the Birdies for the Brave® Patriots’ Outpost hospitality chalet presented by United Rentals which is open Thursday-Sunday of tournament week adjacent to the 13th green. Complimentary food and beverages are provided.

Phoenix Country Club is a private course in central downtown but there are over 200 courses in the area for visiting golfers to play. Within minutes of Phoenix Country Club, Wildfire Golf Club is where the LPGA gals play in the Founders’ Cup and just north is Dove Valley Ranch, Tatum Ranch and Rancho Manana, all great runs. The Short Course at Mountain Shadows in Paradise Valley hones the essential skills beneath the impressive backdrop of Camelback Mountain and the Phoenician down the street was revamped last year taking 27 holes to a solid 18. A little west, Lookout Mountain has some nice elevated vistas and to the south are The Raven, The Legacy and Arizona Grand. ASU’s Karsten is gone but the team’s facility at Papago Golf Club now is very impressive as is Lou’s Bar and Grill connected to the clubhouse.

Phoenix and the entire Valley of the Sun forms a golf mecca for players and spectators. The 2020 Cactus League Schedule has been released so now is a great time to book a combo golf/baseball trip. Watch spring training from February 22- March 22 at ten stadiums in or around Phoenix. Fly most carriers into Sky Harbor Airport or into Phoenix-Mesa Gateway on Allegiant.