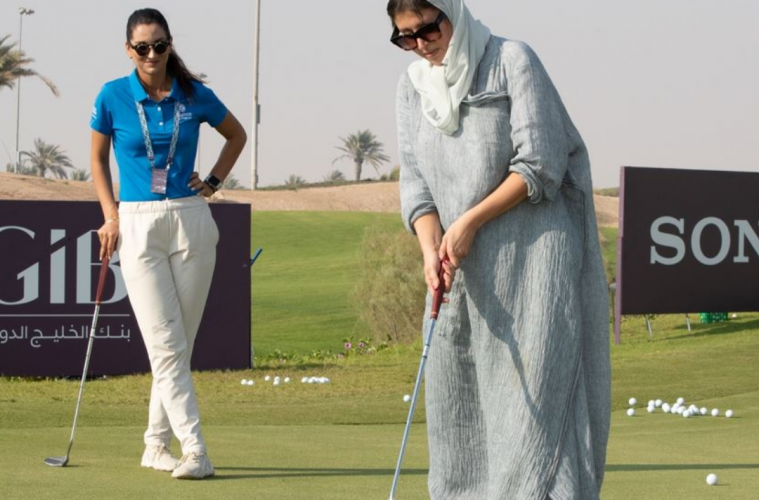 12 November, 2021, Jeddah, Saudi Arabia: Her Royal Highness Princess Nourah bint Mohammed Al Faisal yesterday visited Royal Greens Golf & Country Club to see for herself the progress Golf Saudi is making in terms of growing participation in female sport in the Kingdom. During her first visit to a golf club, Princess Nourah experienced a golf clinic with two Golf Saudi coaches, whilst watching her cousin His Royal Highness Prince Khalid Al Faisal play in the event as an amateur. Picking up a golf club for the first time, Princess Nourah was impressed and excited by Golf Saudi’s Mass Participation programme and what it meant for the future.

Princess Nourah is an internationally recognised designer and entrepreneur with nearly two decades of industry experience. Following a successful career in private commissions, Princess Nourah founded two design ventures, Nuun Jewels in Paris, France and Adhlal in Riyadh, Saudi Arabia. She has also received a certificate in Interior Design from The American International University in Richmond. Princess Nourah served an apprenticeship at one of Paris’s most exclusive workshops in Place Vendome. Soon after, she began working on private commissions, developing her craft and building upon her previous academic work in Paris and London. Princess Nourah’s work has been featured in Forbes, Vogue Paris and Emirates Women. 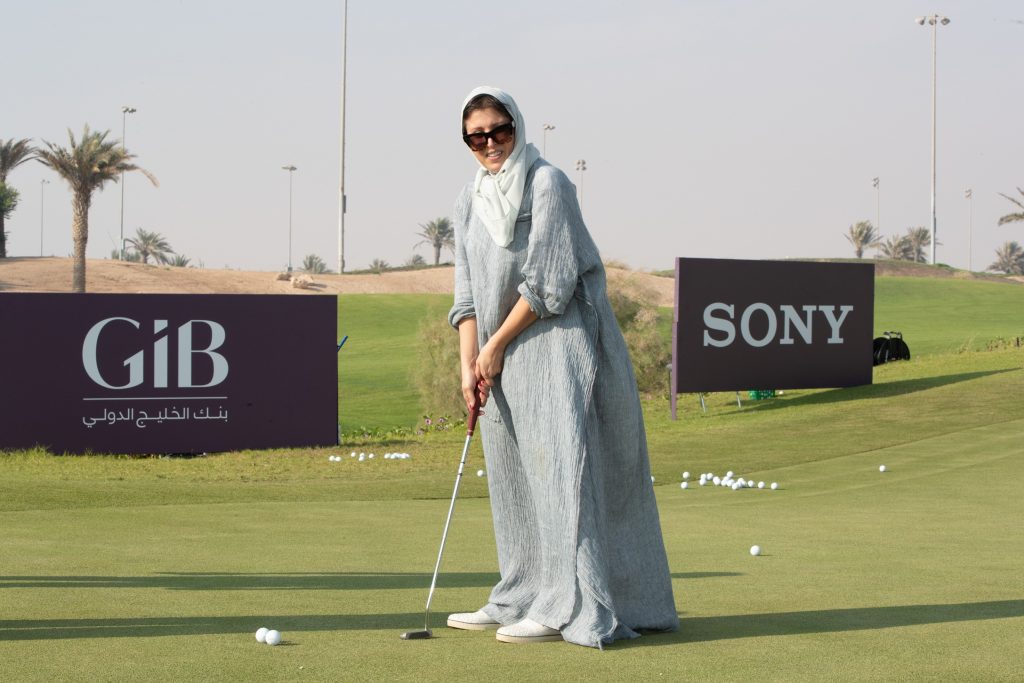 Princess Nourah’s visit to the Aramco Team Series was inspired by her love of sport and having lived in the UK for many years, she was visibly impressed by the quality of facilities at Royal Greens Golf & Country Club. In 2020 she was appointed as a consultant by the Chairman of The Jockey Club Saudi Arabia by His Royal Highness Prince Bandar Al Faisal where she helped work on the conceptualization of The Saudi Cup, as well as curating events for Riyadh and Taif seasons. Golf Saudi and the Jockey Club Saudi Arabia (JCSA) are building a stronger relationship to help boost participation in sport across the Kingdom. The JCSA is looking to use golf as a way of engaging with global fans in both the U.S. and Asia as well as working with Golf Saudi to discuss new opportunities.

Commenting on her visit to the Aramco Team Series and her first golf lesson, Her Royal Highness Princess Nourah said: “It was very pleasing, a lot more fun than I expected and I loved it. I think I now understand how people become obsessed with golf. Sport is essential to Saudi women, it opens up a whole new avenue of possibilities for them, not just as an athlete but also for the career opportunities that are being created for Saudis to work in the sports industry. Golf is very new here in the Kingdom and to see women involved in the Aramco Team Series is very important, as Saudi women will try to emulate what they’ve seen. 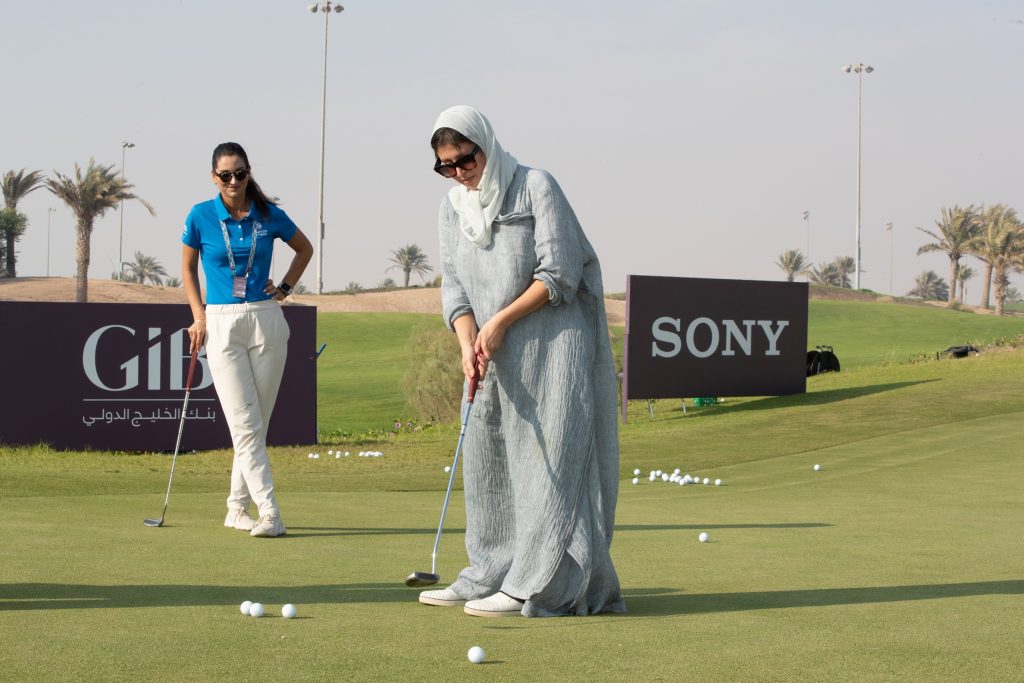 She continued: “In 2020 the first female jockeys came to compete in the Saudi Cup, which was a big deal for us. We now have young Saudi women who are jockeys, have taken up training or now have jobs with the Jockey Club. There is something about sports and its ability to help you focus, set goals, train hard and achieve great things. So, the work Golf Saudi is doing to grow the women’s game is highly commendable and it was fantastic to visit Royal Greens Golf & Country Club for the first time and hear more about the work of the Ladies First Club powered by Aramco and its efforts to boost participation, all of which has left me in no doubt that the future of sport within the Kingdom is very bright.”

Golf Saudi’s Mass Participation programme aims to grow the game of golf and boost participation in Saudi Arabia and one initiative that Princess Nourah wanted to learn more about was the “Ladies First Club powered by Aramco” which was created exactly a year ago in 2020. Princess Nourah enjoyed a golf clinic and as a result she will now be joining the Ladies First Club in a bid to encourage other women to stay healthy and enjoy a new activity. 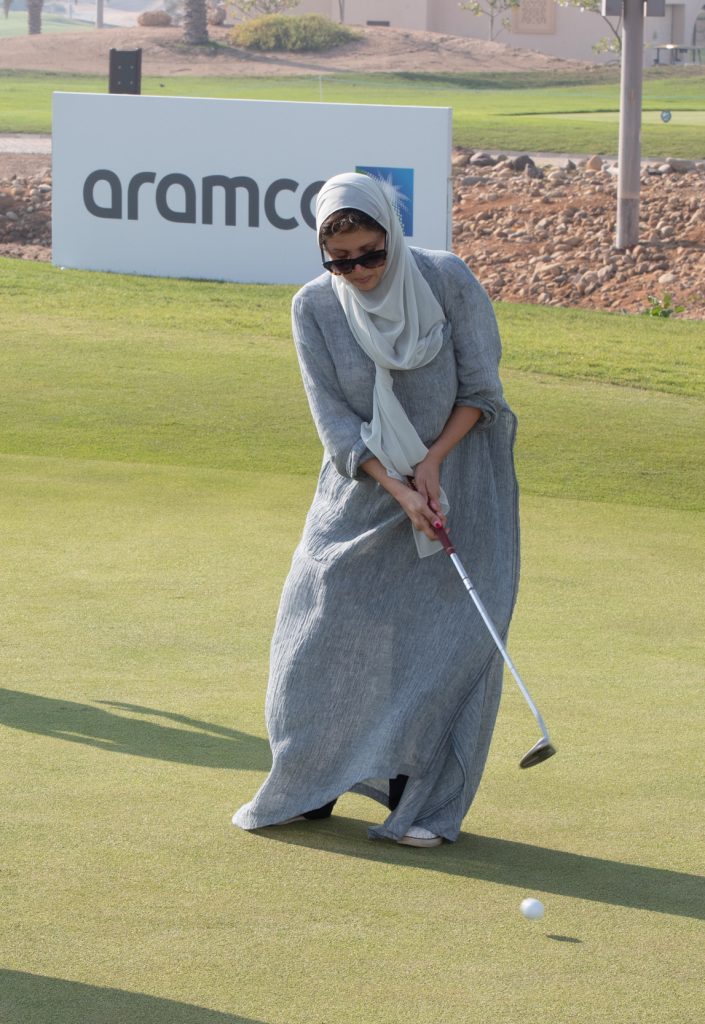 Upon its creation, the Ladies First Club saw scores of women across the country registered to learn golf for the first time with the Ladies First Club, with over 1,000 ladies signing-up in the initiative’s first four days. Over the past twelve months, the Ladies First Club has been successful in terms of bringing more Saudi women into golf, aligning with both Golf Saudi’s continuous efforts to develop the game of golf and the Kingdom’s wider ambitions under Vision 2030, which aims to get more Saudis regularly active.