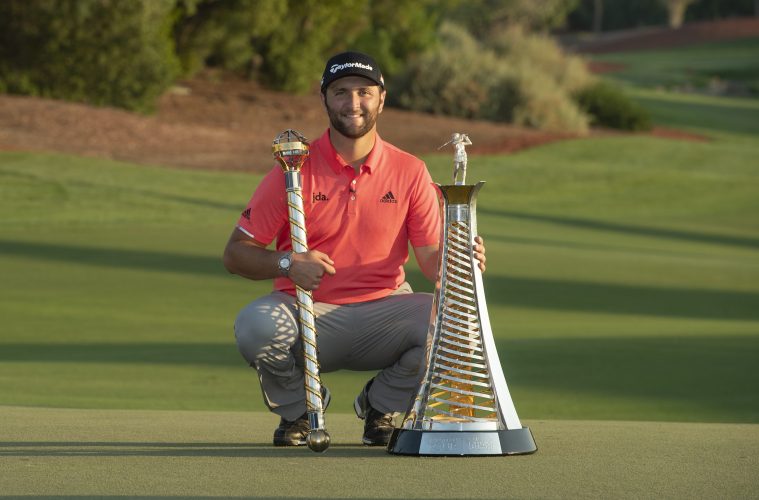 Rolex Testimonee Jon Rahm has won the prestigious 2019 Race to Dubai crown following a season of sustained excellence on the European Tour.

Culminating at the DP World Tour Championship, Dubai, the final Rolex Series event of the year, the Spaniard finished atop the Race to Dubai Rankings presented by Rolex after a phenomenal first place finish in the elite top 50 field at Jumeirah Golf Estates.

Reflecting on his win, Rahm said: “It’s incredible. So much has been accomplished in just one week – it’s the second time I’ve won the DP World [Tour Championship], my fourth Rolex Series win, the second of this year, and then Race to Dubai champion. There’s so many great things, I can’t really put them into perspective yet.

“It’s an unbelievable feeling. It’s great that Rolex is partnering with the European Tour to create this event and to create this highlight in the season.”

Rahm secured the double victory with rounds of 66, 69, 66 and an epic final round of 68 including eight birdies, marking the second occasion the 25-year-old has won the DP World Tour Championship, having done so in 2017, when he was also named European Tour Rookie of the Year.

Rahm’s fellow Testimonee and another past winner of the DP World Tour Championship, Matthew Fitzpatrick, completed his tournament in style with an eagle on his 72nd hole, helping him to an eighth top 10 of the European Tour season.

Launched in 2017 on the 20th anniversary of Rolex’s partnership with the European Tour, the Rolex Series showcases the highest quality golf and the international spirit of the game.