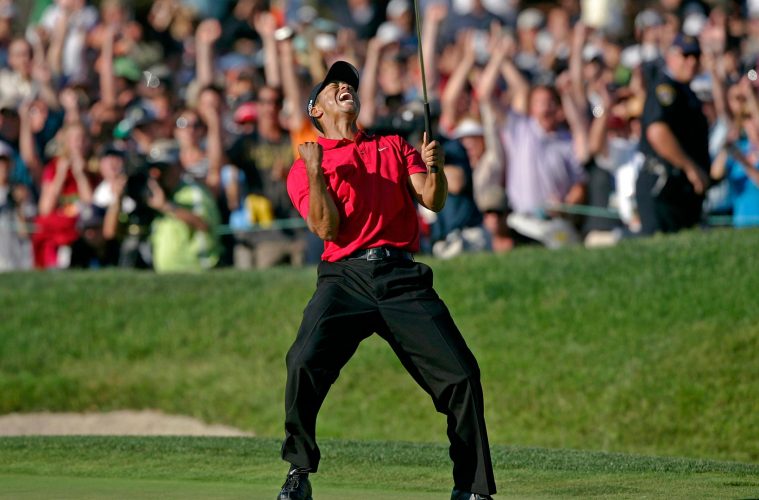 The Putt That Immortalized Tiger Woods

The putt that immortalized Tiger

La Jolla, CA. Expect anything different. Those three words stated by NBC Sports lead golf announcer Dan Hicks after Tiger Woods had holed a 12-foot putt on the 72nd hole at the 2008 U.S. Open to secure a playoff spot against Rocco Mediate crystalized succinctly the essence of Woods and added the definitive exclamation point for a man whose insatiable desire to win was never more on display than his tour de force performance at Torrey Pines that week.

For a man who has made it a point to win golf tournaments in various locations around the globe he is quick to state that winning his 3rd U.S. Open title was his greatest victory among them all.

To appropriately chronicle and rank the array of amazing golf shots executed at the most pressure packed golf events executed by Woods would require q yellow pages listing. The stature of Tiger has matched his name — a relentless stalker — always on the prowl — observing others but ever focused on his ultimate goal — total domination in his sport.

Woods stated to people — most notably his then caddie Steve Williams — how important the event at the South Course at Torrey Pines would be when the United States Golf Association (USGA) made the announcement that the Open would be coming to San Diego. 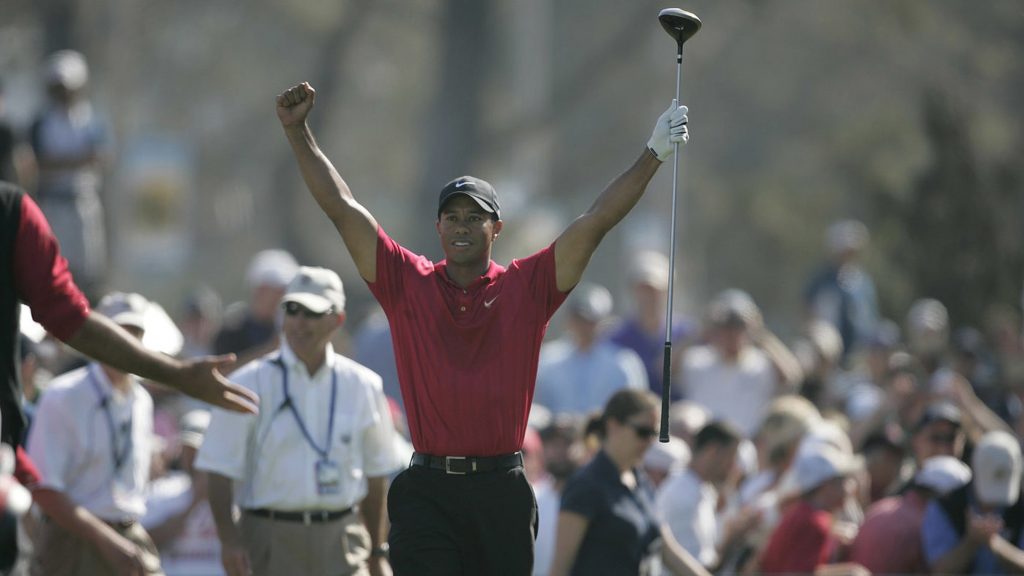 Tiger’s familiarity of the course was well documented — playing the layout as a youngster and eventually securing six Farmer’s Insurnace wins on the PGA Tour prior to the Open — the last coming just several months prior to the event. Amazingly, Woods had won each Farmer’s event stretching back to ’05. If there was ever a proverbial “horse” for a given course — it was Woods and the South 18 at Torrey Pines.

Looking back at the various elements that were in play during that championship resonate even more so today. Woods played high-stakes golf with a double stress fracture in his left tibia and a torn left ACL. At different intervals during the final round — the grimacing and wincing became evident as Woods tried to fight off the pain and battle a relentless opponent in Rocco Mediate.

No one knew the stakes better than Woods. Going into the final round for the ’08 championship it was Tiger again at the top of the leaderboard — a position he was quite familiar with and one where he had never lost a 54-hole lead in a major championship. Woods was ever resolute not to have that happen for the first time in his own backyard in San Diego.

The juxtaposition of Woods and Mediate was also fascinating. Woods was the undisputed force — the persona was ingrained with a champion’s quest to add another victory and do so at a venue where he grew up. The contrast with Rocco Mediate was striking. Woods the svelte golfer — final round red golf short and black pants — the matador in the arena he commands. 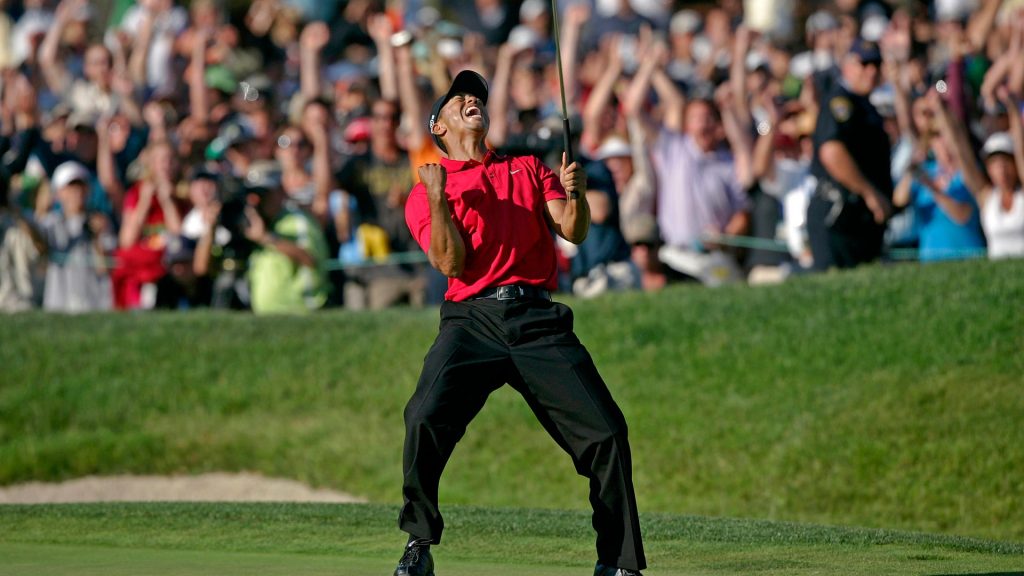 Mediate was the perfect contrast. The “David” to Tiger’s “Goliath.” Looking at Rocco you had the impression of your everyday guy who sells car insurance. He was the kind of guy who might look at the U.S. Open trophy but never really see him taking it home with him. Mediate endeared himself through his self-effacing manner but had the audacity to wear matching red and black when confronting Woods in the Monday playoff. The message from Rocco was unmistakable — he relished the golden opportunity to do what so few have ever done – take out Woods and take home the championship of American golf with it. To Rocco’s credit he never folded like a cheap suit — he counter-punched throughout the entire 91 holes of golf before succumbing.

Woods was ever so aware that winning at the highest level is never an automatic occurrence — no matter the competitor’s lack of gravitas. In 2000, Tiger claimed the PGA Championship but was pushed to the max by a golfer he had played against during junior days in Southern California — Bob May. May was surviving at the professional level but his brief moment in the spotlight at Valhalla was striking for it was he — not bigger name rivals Woods had consistently conquered — that was going to toe-to-toe and not blinking.

The ’08 U.S. Open for Woods also marked a watershed. His carefully crafted image was about to implode in just over a year’s time in a massive way. Coming into the event at Torrey Pines the public’s image of Tiger was a devoted family man, blessed with a meaningful marriage and highlighted by an engaging smile.

Lee Trevino, the famed six-time major champion was once asked what could possibly stop the overwhelming success of Tiger Woods. Lee’s response was direct – injury and a bad marriage. Woods would have to deal with both. 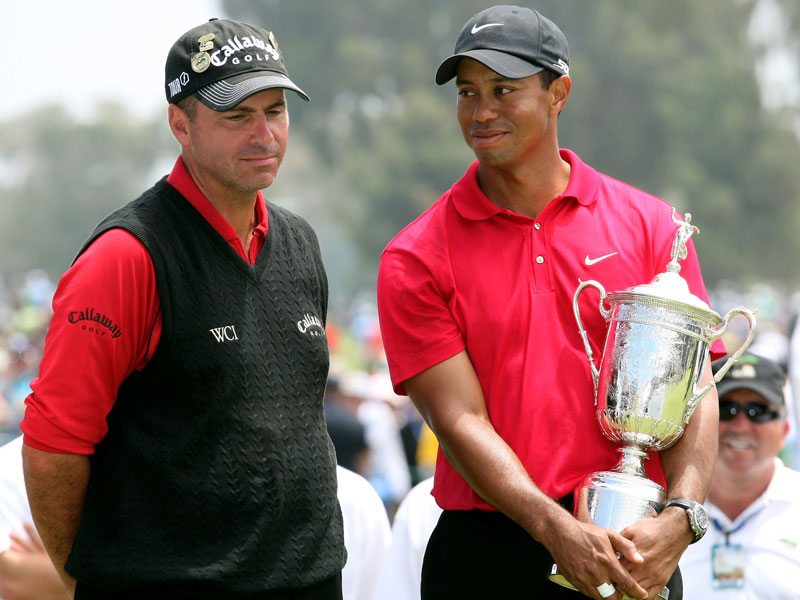 Looking back 13 years the totality and aura of that championship has only gained even more so in stature. Many golf purists had winced at the thought of Torrey Pines — a municipally-owned course in San Diego — serving as host site for America’s national championship. The belief was imbedded that such a stage could never produce such riveting drama. In that regard — they were totally wrong.

The return to Torrey Pines this week will be without the two primary combatants from ’08 — Woods recovering from a serious car crash early this year and Mediate no longer actively competing at the highest levels. In many ways – the absence of the two only strengthens the narrative from the ’08 encounter. It will rest on those memories and not be obfuscated by who and what they are now.

Woods was asked by NBC if he would appear during the telecast of this year’s U.. Open but smartly declined. Tiger’s stature is from competing — not just yet being seen as a “past voice” in lending insight from the ’08 event. Woods also realizes it is the actual golfers competing who should be the primary emphasis when any U.S. Open is being contested.

The passage of time has added a good deal of perspective since Woods and Mediate faced off against one another. Tiger did return to competitive golf but it would take just over 11 years before he would claim his 15th major in winning the 2019 Masters. The reality of time and the accumulation of a myriad of injuries and surgeries could well mean an upcoming announcement from Woods that he may in fact actually retire from competitive golf.

The Tiger who left Torrey at 32 years of age after the ’08 U.S. Open at Torrey had won 14 majors since turning claiming his first in 1997. There was also a strength in that time frame when Woods would win 7 of 11 majors played and most importantly, complete the Tiger slam in having possession of all four major championship titles at the same time.

Only the likes of Bobby Jones had won more of golf’s key events at a faster clip — 13 in seven years by age 28. Interestingly, what Tiger had done at Torrey on the 72nd hole was matched by Jones in the 1929 U.S. Open at Winged Foot when holing a 12-foot par putt to secure a playoff against Al Espinosa which he would go onto to win in convincing fashion the next day.

The USGA will likely use the same flagstick position on the 18th hole where Woods had his celebratory moment when holing that devilish putt. What will happen with Torrey Pines having its 2nd U.S. Open this week will be hard to match the circumstances from 13 years ago.