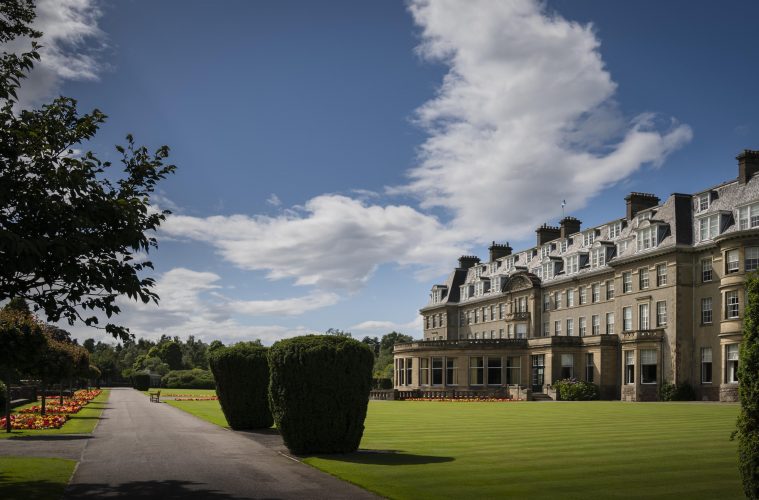 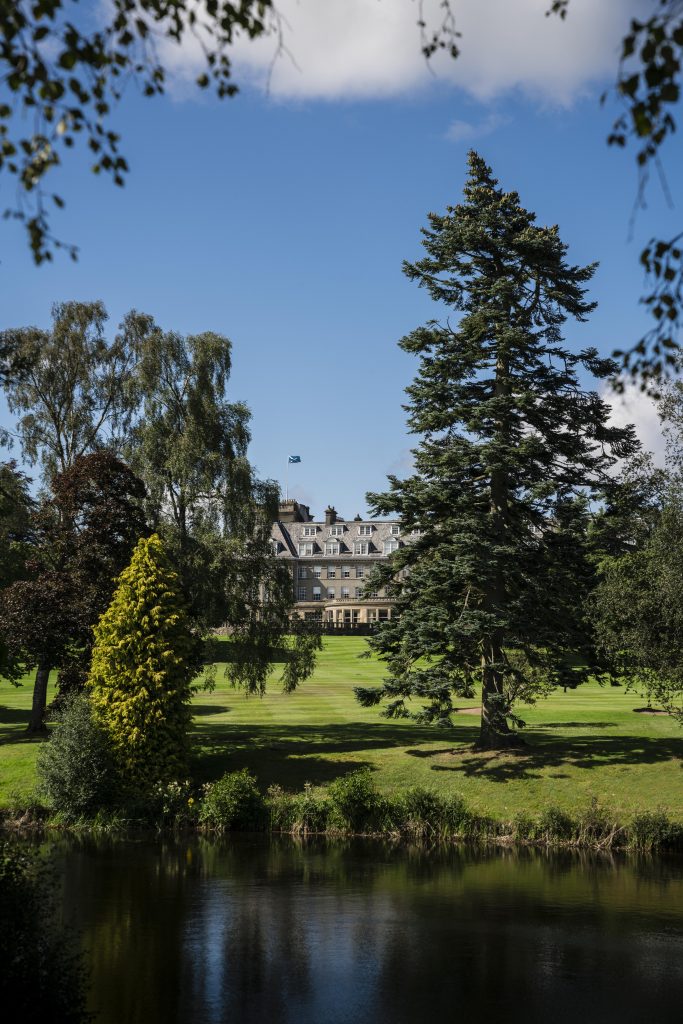 The 16th edition of the bi-annual Solheim Cup Matches is underway at Scotland’s famed Gleneagles Hotel. The event pits the best professionals from team Europe against one from the United States. Gleneagles is no stranger to professional golf having staged numerous events over the years — the most noted recently being the Ryder Cup Matches in 2014 won by Team Europe.16 1/2 to 11 1/2.

The USA team is looking for its third straight win in the event and leads the overall series 10-5. American Julie Inkster is looking to remain undefeated in her 3rd consecutive role as USA Captain.

The matches are being staged on The PGA Centenary Course — one of four at the facility — providing 63 total hole of golf.

Hannah McCook, a golf ambassador at Gleneagles provides a hole-by-hole assessment on what the women from both teams will face during the competition. 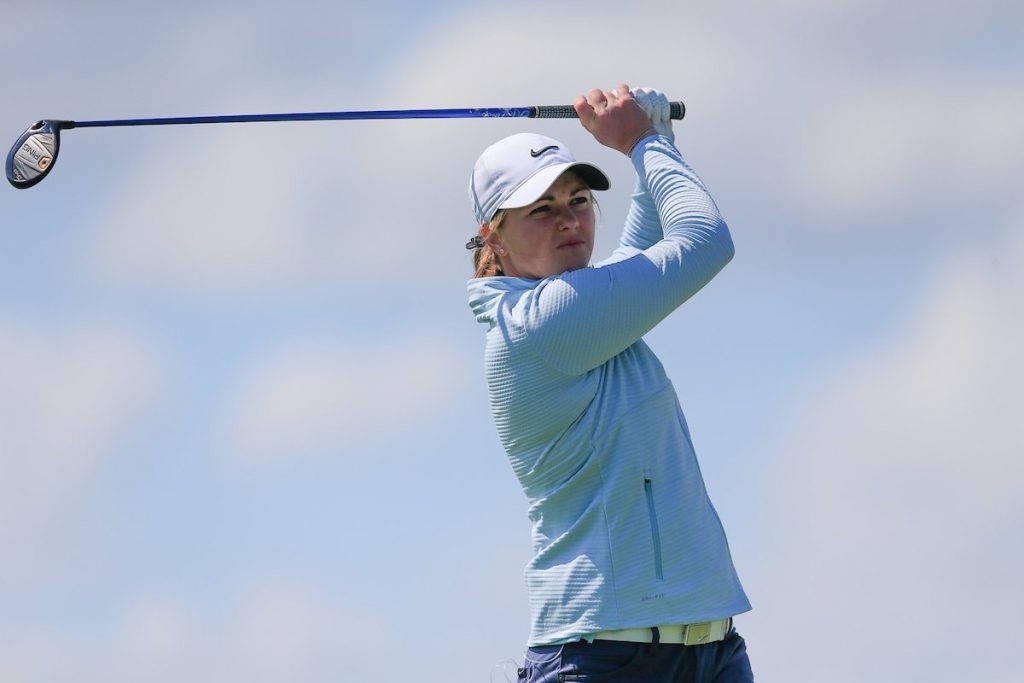 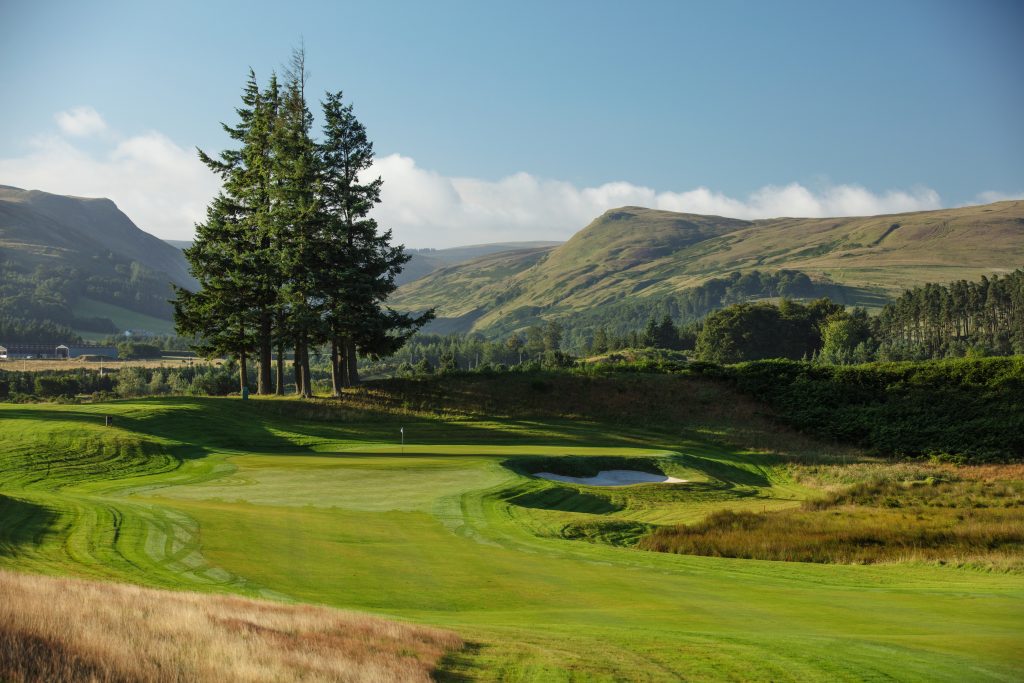 It’s never an easy shot, the first swing of the day, especially in a Solheim Cup, but a drive down the left will leave a great angle for the approach shot. Aiming for the left center of the green is a safe play on a hole where par will be a good start.

A signature hole of the PGA Centenary Course, where a good drive down the right side will open up the green for the longer hitters, by offering a clear look. A well-guarded green, protected by bunkers, water and swales ensures accuracy is key, whether reaching in two or three.

A drive up the middle to left side provides the best view and angle into the green. Uphill all the way to the green makes it difficult to see the bottom of the flag and gauge distance – competitors will need to trust the yardage on this one.

A long, testing par 3 that can play anything from a mid-iron to a driver, depending on the weather conditions. The raised green requires a high-flighted tee shot that must make the carry, as anything short will be sucked back down the bank or be swallowed up by the awaiting bunkers.

This one is always rated the toughest hole on the golf course and during The Solheim Cup will be no different. From the tee, the trees on the left need to be shown respect and only a longer drive will allow the green to be reached in two. The green is well–protected, particularly by marshland short and on the right. Missing long is always a better play here.

A wonderfully framed par-3 that allows any shot slightly right to kick into the green. A miss left leaves a tricky up and down from the heavy rough or awaiting bunker.

A slight dog-leg left to right that requires a drive ideally down the right side, just over the bunker to shorten the hole as much as possible. The approach tends to play a touch longer, so my advice is to take a club more for the safest play. 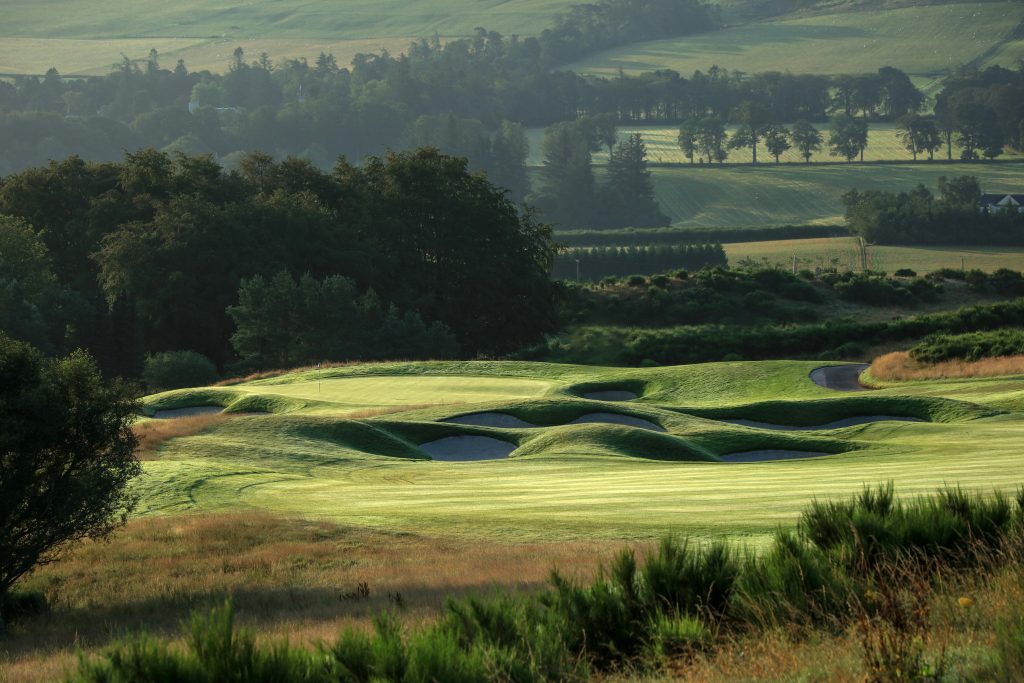 A view of the par 4, eighth hole on the PGA Centenary Course at Gleneagles on August 12, 2019 in Auchterarder, Scotland.

The distance to the fairway bunkers will help form the strategy for this hole – playing to the right is the safest play providing competitors can carry the hazard. The bigger hitters will take the bunkers on, and the reward is a short pitch into the green.

Players will need to be accurate off the tee, the driving line is between the left and right fairway bunkers, favouring the left side slightly. For the big hitters, it could be reachable in two but generally this remains a strategic three–shot par-5, requiring a preciselay-up toward the left side to open up the green.

A great spectator hole, where a dramatic elevation change, combined with fluctuating wind can make club choice difficult for players on this demanding par-3, with the ridged green making yardage control key.

A controlled tee shot, not necessarily with a driver, places a premium on positioning to provide a full approach shot into a well–guarded green, where distance control is key. Anything short will be sucked down the bank while long left leaves an almost impossible up and down. One to watch.

A good drive will need to hug the left side while avoiding the heavy rough to offer a perfect look at the green. A pronounced ridge across the green makes landing the ball on the same level as the flag vital. 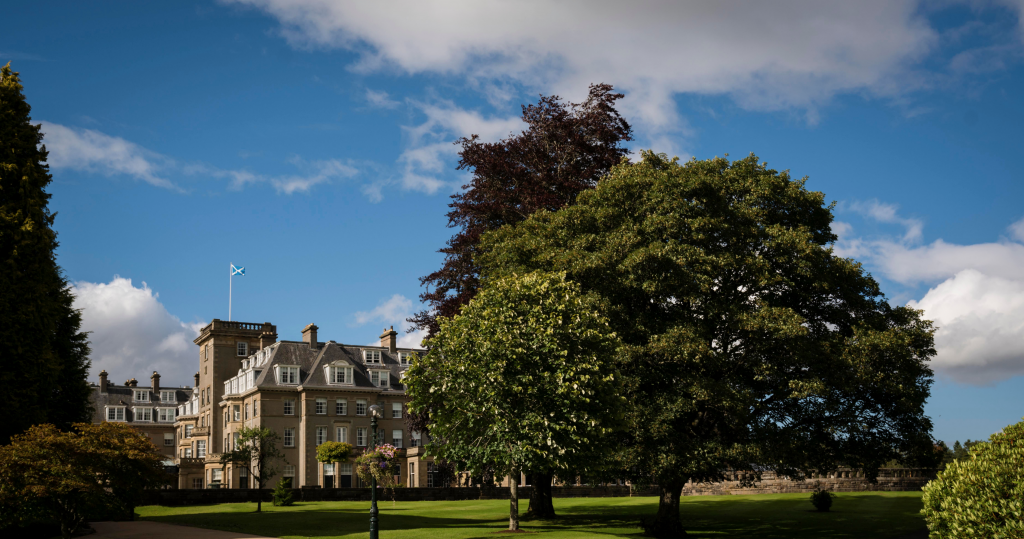 A challenging par-4 that demands a long and accurate drive to have even a slight opportunity of reaching the green in two. The green is well protected by a grassy swale on the right and a bunker on the left.

A short par-4 that can be reached if competitors combine distance with accuracy into this tight, well-guarded, shallow green. The left side remains the safer bail out and is the target for more conservative play.

Ideally a draw from the tee will follow the shape of the fairway. The green is very narrow and guarded by bunkers on the right, while the left side, containing deep rough, should be avoided from the start to finish.

A reachable par-5 for longer hitters, while for many, a strategic lay-up short of the water offers the best choice. A word of warning: The putting surface is heavily contoured, making two putts no certainty, particularly when the pressure is on. 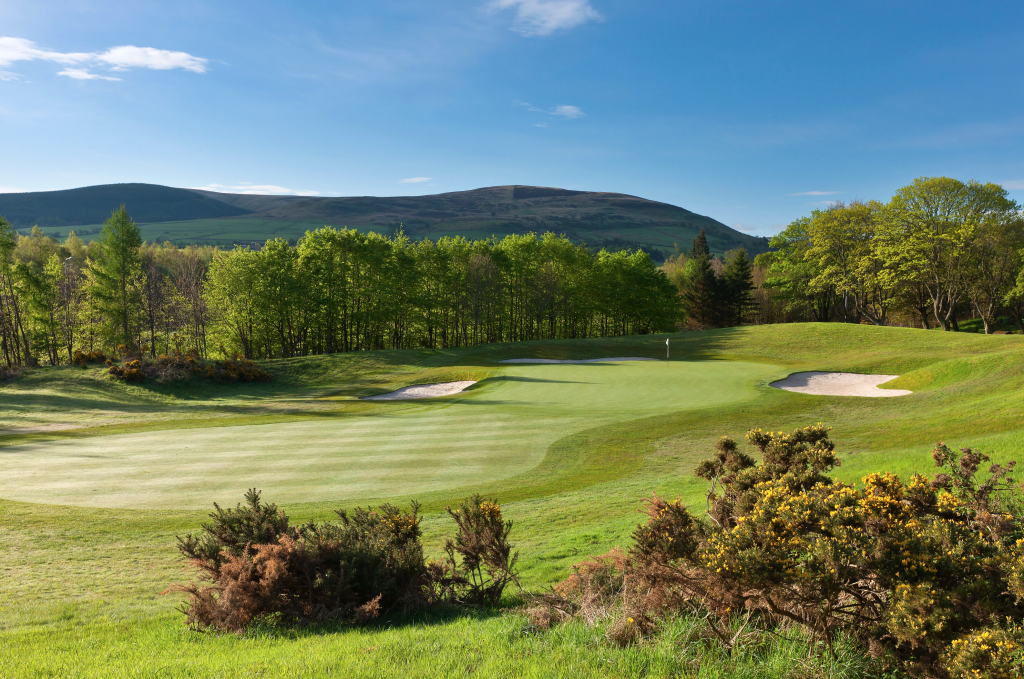 For matches that go this far, this is a fantastic par-3, protected by two deep greenside bunkers to the left and a further shallow bunker to the right, making any up and down tricky. Front right of the green is a good leave, although the tiered green makes putting difficult from any position. 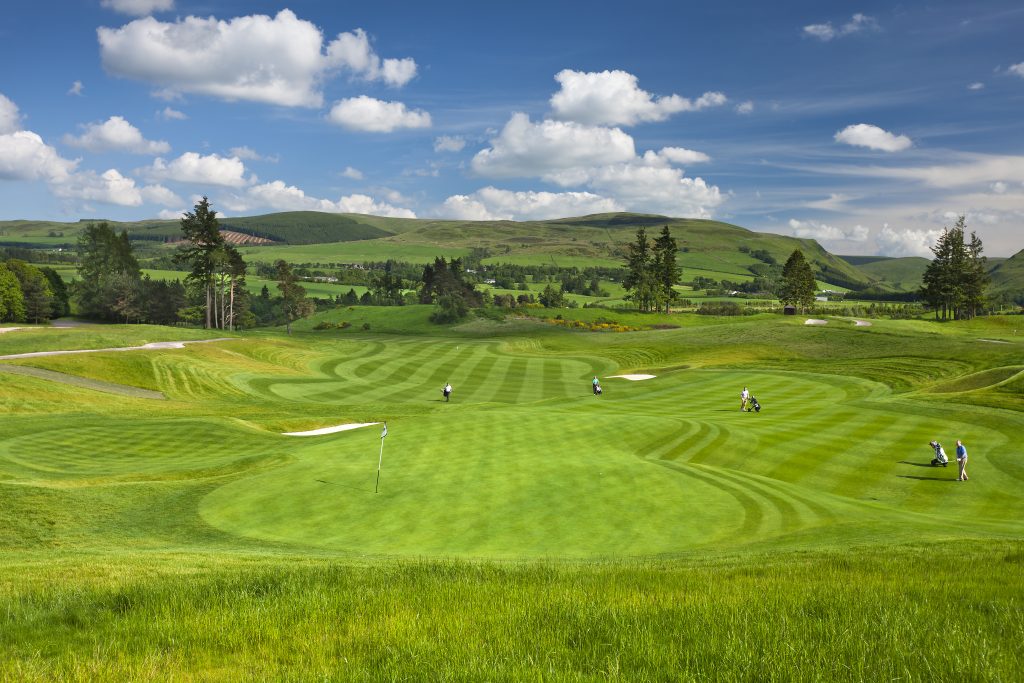 As players head for home, this is a stunning final hole that is a genuine risk and reward par-5. Reachable in two, but the approach into fascinatingly narrow green requires the utmost accuracy, or a challenge up and down awaits. Expect some Solheim Cup drama here.

For more info on Gleneagles go to: