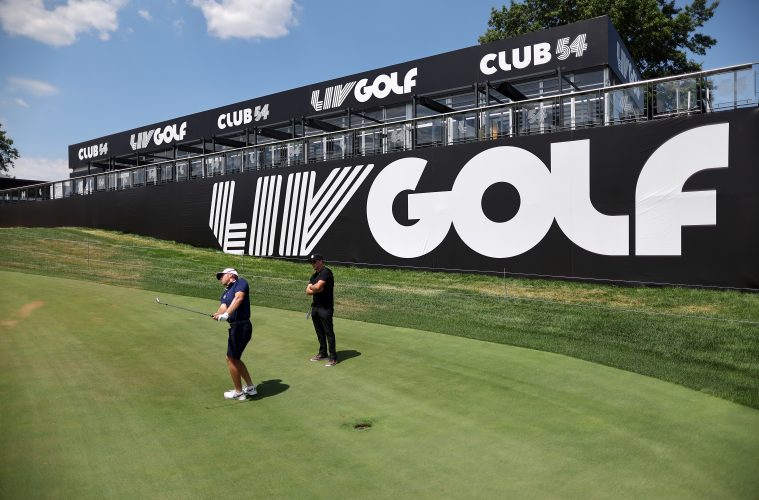 Will stakeholders act? Do fans care?

BEDMINSTER, NEW JERSEY. The searing images that came out of the 9/11 terrorist attack on the USA still resonate for many — especially those who lost loved ones during the events that took place that day at the World Trade Center in New York City, the Pentagon in Washington, D.C. and on a farm field in Shanksville, PA, respectively. That pain of loss is never far from the daily reality they face.

This past week’s LIV golf event at Trump National / Bedminster — won by newcomer and Ryder Cup Captain deserter Henrik Stenson — resurrected deep feelings for a number of people who lost family members and close friends during that tragic event. More profoundly, ground zero in lower Manhattan is just a 40-minute drive from the golf club. 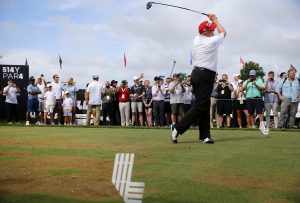 Former U.S. President Donald Trump plays his shot from the first tee during the pro-am prior to the LIV Golf Invitational.

Picketers showed their displeasure throughout the week in staging protects near to the golf club — angry at professional golfers who so willingly accept “blood money” from Saudi Arabia, the central entity in providing the finances for the operations of the LIV Tour and home to 15 of the 19 participants from the terrorist attack that day.

Since the rollout of the LIV golf tour there have been ongoing questions concerning the financing of its operations — money coming directly from the Saudi Arabian sovereign wealth fund.

Concerns have been raised that flagrant human rights abuses have been and continue to occur within the country that impact women, gays and minorities working in the country. Saudi Arabia has also been linked to the October 2018 murder of Washington Post journalist Jamal Khashoggi at the country’s embassy in Turkey. The Saudis have denied all such allegations. Serious questions have arisen that the primary source of the funding for the golf events is meant to “sportswash” — propping up the Kingdom as a legitimate member of the broader global community through its involvement in the sports arena. 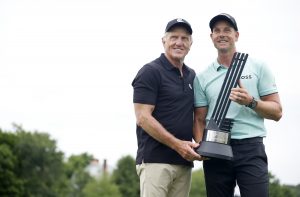 Henrik Stenson of Majesticks GC poses with the first place individual trophy after winning alongside Greg Norman, CEO and commissioner of LIV Golf, during day three of the LIV Golf Invitational.

The actions of Saudi Arabia are not alone. During the 2022 Winter Games in Beijing – the Communist Party in China attempted to showcase the country in the best positive light even though serious crackdowns were taken against protesters in Hong Kong and those living in Tibet. Other countries have tried to do so in past years — the most infamous being the Nazis under Adolf Hitler during the 1936 Summer Olympics in Berlin.

Given the passionate following of sports fans globally — the wherewithal to finance players, teams and organizations is a tactic to build a better image and to build support for such countries.

But now the specter of where such money comes from is now becoming more and more of an issue and one that will remain so given the inquisitive nature of media and others with interest in the topic. It is a line of inquiry that those in LIV – especially the players would like nothing better than to go away. There is also the broader aspect of how such money is being used for other global events that include the Olympics, World Cup and the leading sports leagues.

The speed of how matters have proceeded for LIV has been quite astonishing.  Eight events planned this year — 14 in 2023.  Players under the LIV banner will be expected to play in all such events.

The Saudi involvement has wooed a number of golfers — most notably Phil Mickelson, Dustin Johnson, Patrick Reed, Lee Westwood and a number of others. The main talking point stated by the players involved has centered around three words – “growing the game.” That public relations statement has fallen on deaf ears — especially those who lost loved ones on 9/11. Survivors chastised the players for being nothing more than pawns for the Kingdom and went as far in sending a letter criticizing former President Donald J. Trump in having the latest event hosted at his New Jersey golf facility. 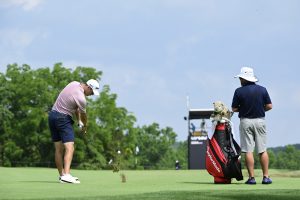 Team Captain Martin Kaymer of Cleeks GC plays his second shot on the first hole during the pro-am prior to the LIV Golf Invitational.

But the matter of “sportswashing” is not so narrowly applied. The PGA TOUR which has been the dominant center point for professional golf for over 50 years and has staged events in countries — most notably China — where issues of human rights abuses have happened and continue to do so.  The PGA TOUR also granted permission for certain players to play in an event earlier this year in Saudi Arabia. Did the issue of human rights not matter to the TOUR then? Or was it only when LIV went full speed ahead in securing player defections did the issue then become one of major importance?

The previous predictable world of professional golf is now going through convulsions with no sign of abating.

However, the butting of heads between the PGA TOUR and LIV is only one part of the ongoing story.

The PGA TOUR did take action to suspend players who bolted for LIV. However, the TOUR does not run any of the game’s four major championships. It will be extremely interesting to see what actions, if any, are taken in 2023. The first major event will not happen until early April when the Masters is played at Augusta National Golf Club. Chairman Fred Ridley has not spoken since the various key players opted to leave the TOUR for LIV. Given that the Masters is an invitational event it is possible Ridley will “disinvite” those players who were previously invited. That would include previous champions such as Mickelson, Johnson, Patrick Reed and Charl Schwartzel. 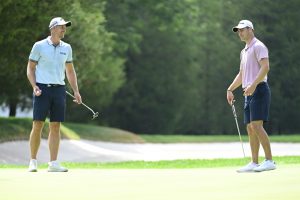 Henrik Stenson of Majesticks GC and team Captain Martin Kaymer of Cleeks GC talk on the second green during the pro-am prior to the LIV Golf Invitational.

On the other hand — Ridley may opt to permit players previously exempt to remain in the field. How Augusta National responds could well determine how the leaders of the others three majors — the PGA of America, USGA and R&A opt to respond. Should any opt to impose such sanctions — particularly in the two “Open” events — could well mean litigation being filed by such previously eligible players.

For LIV players — and those contemplating a desire to join that effort — the wherewithal to remain eligible for golf’s four majors could well become a key tipping point issue. The four majors are legacy events — linking golf’s grand past and future. Those events have also provided the underpinnings in highlighting the greatest players to have played in the sport. Being shut out of such future events could well mean the next generation of players taking a “wait and see” approach before making any commitments to LIV — no matter the money being offered through the Saudis.

Although LIV players were able to participate in the majors in ’22 — such leaders as Mike Whan of the USGA and Martin Slumbers did not rule out the possibility future eligibility could well be updated as those organizations deem necessary. Seth Waugh, CEO of the PGA of America, did state previously that players who left the PGA TOUR are no longer eligible for the PGA Championship since TOUR players are given status as members of the PGA of America. With no connection to the PGA TOUR, it would seem those who left will not have access to golf’s second major event which will be held next May at Oak Hill CC in Rochester, NY. 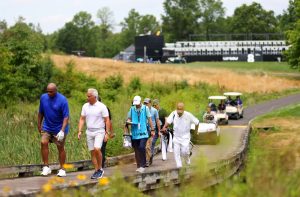 Charles Barkley and celebrity Chef Geoffrey Zakarian walk together during the pro-am prior to the LIV Golf Invitational.

LIV faces two other critical issues in order to raise its profile. The first deals in securing world ranking points for the events it holds. Greg Norman, LIV’s Commissioner, has stated the organization has applied to secure such points but that matter will be decided by various stakeholders including PGA TOUR Commissioner Jay Monahan and others including Whan and Slumbers respectively. Norman has stated that Monahan cannot participate in the discussions because of a negative view towards LIV expressed by the Commissioner when interviewed by CBS announcer Jim Nantz during the telecast of this year’s RBC Canadian Open.

No matter who sits in on the discussion — the nature of how LIV events are now organized with just three rounds of golf and no cut after 36 holes could be a crucial issue and one that requires updating.

LIV also does not have a major television network to broadcast its events, thus far, and it remains speculative that any American network will opt to do so given the pushback against the financing of LIV by Saudi Arabia. The networks are publicly traded companies and any desire to do so by any one of them could well mean serious pushback from a range of participants including survivors and those in the Congress.

Just recently, the U.S. Department of Justice (DOJ) opened an investigation on the actions taken by the PGA TOUR against those players who left for LIV. There are now calls from members of Congress — Chip Ray, a Texas Republican, quoted in the Wall Street Journal (July 29)

“I do think it would be appropriate for the Justice Department to be looking at Saudi Arabia.” On the other side of the partisan divide — Tom Malinowski (D-NJ), who represents the district where Bedminster is located, was also quoted in the same article — “It’s a transparent attempt by the Saudis to use sports to white wash their human rights record and bad image in the United States, and we shouldn’t have any part of it.” 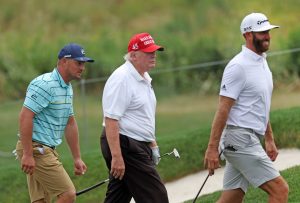 At the base level — the interest of golf fans will also play a role. In the event just played at Trump’s golf facility the reaction to Saudi involvement and the connection of the country to the happenings on 9/11 were mixed. Some simply said they were present because of a desire to see certain players and to catch a glimpse of the former president. Some weighed in that if LIV were underwritten by China than they would have not come to the event.

The galvanizing nature of sports globally will have fans not only watching but placed in the difficult position to decide if they will support such events — no matter who fronts the money for them. Sports stars and teams beyond golf are already funded by a range of individuals and in some cases countries. Will the passion of fans, who judge results by the wins of their favored players and teams, trump – no pun intended — where the money comes from and the record of those who give it?

The ascension of LIV is now changing the professional golf landscape. How that sorts out is still to be determined. Yet the issue of “sportswashing” is now an issue that has far deeper ramifications. These specific dimensions will only grow in importance as questions are raised. Where such money comes and what such givers are now expecting in return is now on the radar screen of attention and will likely only grow with more intensity. 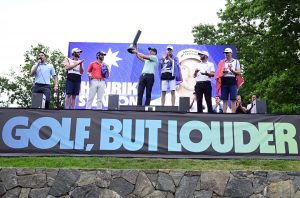 How long will the Saudis remain patient in their effort to be a central force in professional golf remains to be seen. The same can be said of the PGA TOUR and what other remedies it will implement beyond the ones announced by Monahan at this year’s Travelers event. Both groups comprehend the critical need is not about the aging players who left for LIV but the next generation of players who will likely decide who the ultimate winner is.

Sports are now front and center on the battleground that takes place both on and off the actual athletic field.

LIV has now changed the conversation in professional golf. What were small ripples initially could well develop into a seismic earthquake.

As the acclaimed Bette Davis said in the classic 1950 movie, All About Eve, –

“Fasten your seat belts — it’s going to be a bumpy night.”