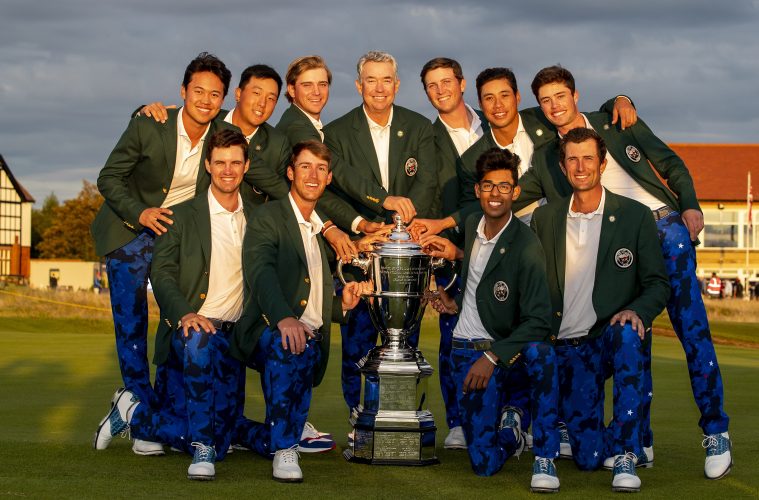 LIBERTY CORNER, N.J. (March 1, 2021) – The USGA’s International Team Selection working group today announced the 10 players who will make up the 2021 United States Walker Cup Team. The USA Team will meet Great Britain and Ireland in the 48th Match at Seminole Golf Club, in Juno Beach, Fla., Saturday and Sunday, May 8-9. It will be the first time the competition has been held in the spring on U.S. soil.

The 10-player team, which will be captained by Nathaniel Crosby, of Jupiter, Fla., includes Tyler Strafaci, 22, of Davie, Fla., who earned his place by winning the 2020 U.S. Amateur Championship. Three players earned places as the top three Americans in the World Amateur Golf Ranking® / WAGR® as of Feb. 10. They are: Ricky Castillo, 20, of Yorba Linda, Calif. (fourth in the WAGR); John Pak, 22, of Scotch Plains, N.J. (seventh in the WAGR); and Davis Thompson, 21, of St. Simons Island, Ga. (second in the WAGR).

“This United States Team is a talented group of players who will work together, under Nathaniel Crosby’s leadership, to be competitive against Great Britain and Ireland in this friendly match among some of the world’s leading amateur golfers,” said John Bodenhamer, USGA senior managing director, Championships. “The USA Team shares George Herbert Walker’s vision for an international event that embodies the spirit of camaraderie and promotes interest in the game.”

The Walker Cup Match is a biennial amateur team competition between the USA and a team composed of players from Great Britain and Ireland, selected by The R&A. The Match is played over two days with 18 singles matches and eight foursomes (alternate-shot) matches. The USA leads the overall series that began in 1922, 37-9-1, but it has been extremely competitive over the last three decades, with the USA holding just a 9-7 advantage in the Match since 1989.

“It is once again a great privilege to serve as the USA captain and to work with a group who represent the best of amateur golf,” said Crosby, who in addition to guiding the 2019 victory also played on the winning USA Team in the 1983 Match. “The 10 team members have a notable list of accomplishments on the collegiate, national and international levels. They will represent the United States in the spirit and tradition of the Walker Cup Match.”

The first USA Walker Cup Team posted an 8-4 victory in 1922 at the National Golf Links of America, in Southampton, N.Y., and is considered among the best teams ever assembled, with Francis Ouimet, Bob Jones, Charles “Chick” Evans and Jess Sweetser. Many of the game’s greatest players have competed in the Walker Cup, including U.S. Open champions Jack Nicklaus, Tiger Woods, Jordan Spieth, Dustin Johnson and Bryson DeChambeau for the USA and Graeme McDowell, Rory McIlroy and Justin Rose for Great Britain and Ireland.

“The selection of the USA Walker Cup Team is a diligent process that highlights the USGA’s role and mission in amateur golf,” said Martha Lang, chairperson, International Team Selection working group and a past Curtis Cup Match competitor and captain. “In a similar way, Seminole Golf Club, Donald Ross’ architectural masterpiece, has been a longstanding friend to amateur golf and will be an impressive venue for this international competition.”

McClure Meissner, 22, of San Antonio, Texas; and Garett Reband, 21, of York, S.C., are the first and second alternatives, respectively.

Due to health and safety guidelines, attendance at the Match will be limited. Information on the availability of public tickets will be posted in the spring on walkercup.org.

Ricky Castillo, 20, of Yorba Linda, Calif. (born 2-19-01): In 2020, Castillo earned an exemption into the U.S. Open at Winged Foot, advanced to the semifinals of the Western Amateur and was a member of the USA Arnold Palmer Cup Team. Castillo received the NCAA Division I Phil Mickelson Outstanding Freshman Award and was a first-team All-American at the University of Florida in 2019-20. Additionally, he won two individual tournament titles and was chosen first-team All-Southeastern Conference. Castillo has played in three U.S. Amateurs and reached the Round of 16 in 2019 at Pinehurst No. 2. He has also competed in three U.S. Junior Amateurs, advancing to the Round of 16 twice and sharing medalist honors in 2019 with William Moll and 2021 Walker Cup teammate William Mouw.

Pierceson Coody, 21, of Plano, Texas (born 1-7-00): Coody won the 118th Western Amateur last August, defeating Rasmus Neergaard-Petersen, 2 and 1, in the final. Coody and his twin brother, Parker, are juniors on the University of Texas team and are the grandsons of 1971 Masters champion Charles Coody. Pierceson earned All-Central Region recognition as a sophomore. In 2019, Pierceson advanced to the Round of 16 in the U.S. Amateur at Pinehurst No. 2. He also posted a two-stroke victory in the 116th Trans-Mississippi Amateur at Maridoe Golf Club in his home state, joining a list of champions that includes Jack Nicklaus, Ben Crenshaw and Bryson DeChambeau. He was a member of the 2020 USA Arnold Palmer Cup Team.

Quade Cummins, 24, of Weatherford, Okla. (born 3-6-96): Cummins has competed in three consecutive U.S. Amateurs (2018-20). As a fifth-year senior at the University of Oklahoma, he posted three top-10 finishes, including two runner-up efforts, in the fall of 2020. He was chosen first-team All-American in a COVID-shortened 2019-20 season. Last summer, Cummins finished third in the Southern Amateur with a 72-hole score of 283 (5 under) and tied for fourth in the Sunnehanna Amateur the following week. In December, he made the 36-hole cut in the PGA Tour’s Mayakoba Golf Classic. Cummins won the 2019 Pacific Coast Amateur by four strokes with a four-day total of 264 (20 under) and was a member of two USA Arnold Palmer Cup Teams (2019, 2020).

Austin Eckroat, 22, of Edmond, Okla. (born 1-12-99): Eckroat, who played in the 2019 U.S. Open at Pebble Beach, earned second-team All-America recognition as a junior at Oklahoma State University in 2019-20. A three-time All-Central Region and All-Big 12 Conference selection, he finished second in the Maridoe Collegiate Invitational in the fall of 2020. He has played in four U.S. Amateurs and advanced to match play in 2019 at Pinehurst Resort & Country Club. Eckroat tied for sixth in last year’s Southern Amateur. He reached the quarterfinals of the 2017 U.S. Junior Amateur, losing to fellow OSU player and 2020 U.S. Open runner-up Matthew Wolff. Last December, he tied for 12th in the PGA Tour’s Mayakoba Golf Classic with a 72-hole score of 270 (14 under).

Stewart Hagestad, 29, of Newport Beach, Calif. (born 4-10-91): Hagestad was a member of the winning 2017 and 2019 USA Walker Cup Teams and has a combined 3-2 record in the two competitions. Hagestad, who has competed in three U.S. Opens, reached the quarterfinals of the 2020 U.S. Amateur. He has played in 21 USGA championships, including 11 U.S. Amateurs. He rallied to defeat Scott Harvey in 37 holes in the 2016 U.S. Mid-Amateur Championship, producing the largest comeback victory since a 36-hole final was introduced in 2001. Hagestad also won a gold medal in the mixed-team competition of the 2019 Pan American Games, in Lima, Peru, and was the low amateur in the 2017 Masters Tournament, becoming the first invited Mid-Amateur champion to make the 36-hole cut.

Cole Hammer, 21, of Houston, Texas (born 8-28-99): Hammer helped the USA to victory in the 2019 Walker Cup at Royal Liverpool Golf Club. He has competed in 12 USGA championships, including two U.S. Opens, and advanced to the semifinals in both the U.S. Amateur and U.S. Junior Amateur in 2018. Hammer also won the 2018 U.S. Amateur Four-Ball with partner Garrett Barber and was the third-youngest player to compete in a U.S. Open when he played at Chambers Bay at age 15 in 2015. Hammer, a junior at the University of Texas, was a key figure in the Longhorns’ runner-up finish in the 2019 NCAA Championship. In 2018, Hammer won the Western Amateur and helped the USA to a second-place finish in the World Amateur Team Championship. He won the South Beach International Amateur last December and tied for second in the Jones Cup Invitational in February.

William Mouw, 20, of Chino, Calif. (born 9-5-00): Mouw has played in three U.S. Amateurs and twice advanced to the Round of 16, in 2018 at Pebble Beach and 2020 at Bandon Dunes. He also reached the Round of 32 in two consecutive U.S. Junior Amateurs (2018, 2019) and shared medalist honors in 2019 with William Moll and 2021 Walker Cup teammate Ricky Castillo. Mouw, the son of a chicken egg farmer, was chosen first-team All-American and All-West Region as a freshman at Pepperdine University in 2019-20. He set the program’s freshman record with five top-10 finishes. Mouw also recorded a pair of top 10s in the fall of 2020 as a sophomore. Mouw won the 2019 California State Amateur and was a member of the basketball and golf teams at Ontario Christian High School. He was a member of the 2020 USA Arnold Palmer Cup Team.

John Pak, 22, of Scotch Plains, N.J. (born 12-18-98): Pak won all three of his matches as a member of the victorious 2019 USA Walker Cup Team. He tied for 51st and was low amateur in the U.S. Open last September at Winged Foot Golf Club. A senior on the Florida State University team, Pak earned All-America and All-South Region recognition for the third consecutive year in 2019-20. He is second on the school’s all-time list with seven tournament victories, including the 2019 Atlantic Coast Conference Championship. He has competed in four U.S. Amateurs, reaching the Round of 16 in 2019 at Pinehurst No. 2. Pak, who has played in nine USGA championships, advanced to match play in all four U.S. Junior Amateurs in which he competed, reaching the quarterfinals in 2015 and semifinals in 2016.

Tyler Strafaci, 22, of Davie, Fla. (born 7-23-98): Strafaci won the 2020 U.S. Amateur, edging Charles Osborne, 1 up, in the final at Bandon Dunes, and claimed the North & South Amateur, defeating William Holcomb V, 3 and 1. Strafaci, who rallied from an early 5-down deficit in the U.S. Amateur final, is the fourth player to win both championships in the same year, joining Jack Nicklaus, Hal Sutton and George Dunlap. His grandfather, Frank, won two North & South Amateurs (1938, 1939) and the 1935 U.S. Amateur Public Links. Tyler, who competed in the 2018 U.S. Open at Shinnecock Hills, has played in seven USGA championships, including four U.S. Amateurs. As a member of the Georgia Tech program through December 2020, Strafaci earned honorable mention All-American and was a three-time All-East Region and two-time All-Atlantic Coast Conference (ACC) performer.

Davis Thompson, 21, of St. Simons Island, Ga. (born 6-5-99): Thompson nearly made the 36-hole cut in the 2020 U.S. Open after carding a first-round 69 at Winged Foot Golf Club. In 2020, he was a quarterfinalist in the Western Amateur and advanced to match play in the U.S. Amateur at Bandon Dunes. Thompson, a senior at the University of Georgia, earned first-team All-America and first-team All-Southeastern Conference (SEC) honors in 2019-20. Thompson was selected to the 2020 USA Arnold Palmer Cup Team along with several USA Walker Cup teammates. He competed in two PGA Tour events last year and tied for 23rd in the RSM Classic (10-under 272). Thompson tied for second in the Jones Cup Invitational on Feb. 7 at Ocean Forest Golf Club, site of the 2001 Walker Cup Match.