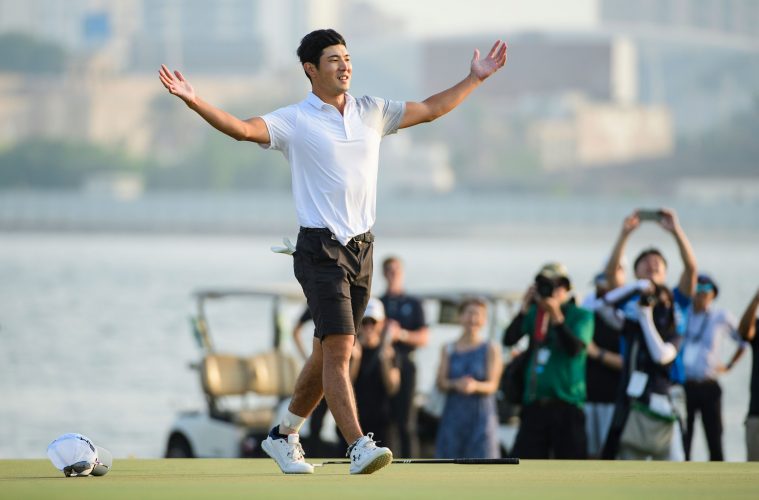 The No. 1 player in the World Amateur Golf Ranking ® (WAGR®) shot a three-under-par 68 in the final round to catch up with Kho, who fired a 64 in the third round followed by a 65 to finish on 14 under par.

The two players headed back to the 18th hole, which was parred in the first attempt. Kho then found the water with his second from the right fairway bunker playing it a second time. Nakajima hit a superb drive, followed by a second to 20 feet. He rolled that in to seal the victory with a birdie.

It was the second consecutive playoff in AAC history, following the two extra holes played by Yuxin Lin and Takumi Kanaya in the 2019 championship in Shanghai.

With his win, the 21-year-old Nakajima receives an invitation to the Masters Tournament in 2022, thus making his dream of playing a practice round at Augusta National Golf Club with the reigning Masters champion Hideki Matsuyama come true, as well as an exemption into The 150th Open at St Andrews.

“I am very proud of what I have achieved. To follow in the footsteps of Hideki-san and Takumi feels great. I am so excited that I will be playing three majors in 2022 (he is also exempt for the U.S. Open as part of winning the Mark H. McCormack Medal as the men’s World No. 1 in 2021 WAGR ®). I am very thankful to the tournament for giving us such great opportunities,” said Nakajima, who finished joint runner-up behind Kanaya in the 2018 edition in Singapore.

Nakajima, who is a former R&A Foundation Scholar, made a blazing start with birdies on the first, third and fifth holes. That took him three clear of the field but a three-putt bogey on the sixth, followed by a double bogey on the ninth from a difficult stance in the fairway bunker, brought him back to the field.

With a fine run of five birdies in six holes from the ninth, Kho propelled himself into contention and finished with four pars to equal the low round of the day.

The University of Notre Dame senior’s second place was Hong Kong’s best finish in 12 years of the championship.

“I was three back and I knew the guys in the last group had the potential for going deep. I just knew if I focus on my own game, I could post a low one out there and I did exactly that. I just made a string of birdies and by the time I knew it I was in the lead with three to go. That was nerve-racking but at the same time I feel like I’ve prepared for that pretty well,” said Kho, ranked No. 220 in the WAGR®.

“I felt more comfortable this time. To be able to play well down the stretch gives me a lot of confidence going forward. I hit the shots I needed to hit. If I had the same shot again, I would choose the same club and thought process. I just didn’t execute this time. Keita won with a birdie so I have no regrets with that decision.”

Korea’s Wooyoung Cho matched Kho’s 65 to finish tied third alongside China’s Bo Jin (68) at 12 under. Cho was bogey-free with five birdies on his back nine, including one on the challenging 18th, while Jin slipped early with a double bogey on the par-4 second hole, but followed with five birdies without dropping any more shots.

Defending champion Yuxin Lin of China started with a birdie but followed that with a triple bogey on the second. He fought his way back into contention, before he sliced his tee shot on the par-4 15th out of bounds. An even-par 71 saw him finish tied seventh.

“I am definitely happy with the way I fought back after the second hole. I gave it my best until the 15th happened. I will take this as a learning experience and continue to work hard,” Lin said.

Ahmed Skaik (71), who this week became only the second player from the UAE to make the cut at the AAC, finished in 42nd place at four-over-par total.

Created in 2009, the AAC was established to further develop amateur golf in the Asia-Pacific region. The champion receives an invitation to compete in the Masters Tournament and The Open, while the runner(s)-up gain a place in Final Qualifying for The Open.

The 2021 championship marks the first edition held in the UAE, one of the APGC’s 42 member countries, and joins the numerous professional and amateur events Dubai hosts annually, including the European Tour’s Dubai Desert Classic and DP World Tour Championship.

Over the AAC’s 12-year history, the championship has served as a springboard to some of the world’s top players today, including Matsuyama, a two-time AAC winner and 2021 Masters champion.

For more information about the AAC, please visit AACgolf.com.