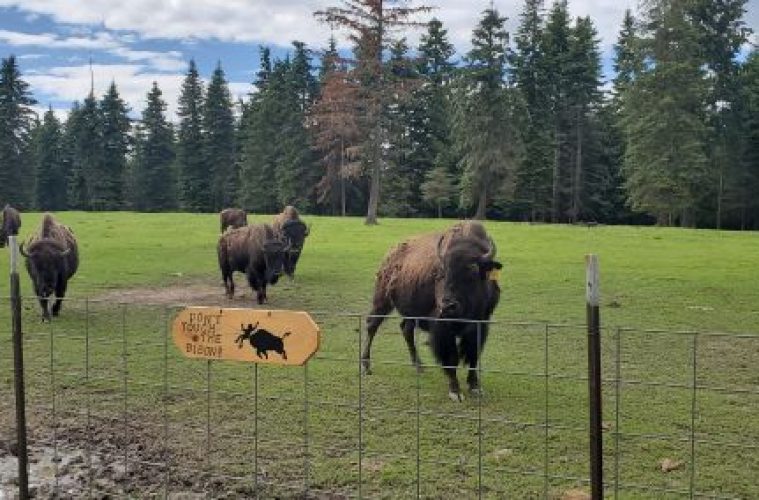 If you like golf and gaming, then Coeur d’Alene Casino Resort Hotel is calling your name. The pride of the Coeur d’Alene Tribe is showing off its culture with dancers, foods, tours, and golf around their verdant valley. 300 comfortably appointed rooms and suites are situated with views of nature in the Mountain Lodge and Spa Tower.

Circling Raven Golf Club was named after the chief by suggestion of Dave Christenson, the golf director. His wife Jenny does an excellent job of stocking the golf shop merchandise. On the first tee we were paired with two fun Canadians who play here every year as well as in Scottsdale, Arizona. It’s what they call “the perfect golf trip combo.” Their course knowledge was helpful during the round combined with the starter’s advice to stay out of the marshes which are environmentally protected. Bring extra balls just in case as there are many holes with carries. The vast wilderness in Worley, Idaho, a short drive from the Spokane airport, was an ideal canvas for designer Gene Bates, set amidst the Coeur d’Alene National Forest and rolling hills of the Palouse. While we didn’t see any wildlife, the ravens were present, and a bald eagle regally circled over our foursome.

The resort’s H2H Bison Ranch Tour is fairly wild. During the shuttle ride to the ranch, guests are educated about the history of the tribe. “Qhest” (pronounced ak-hest) is their “hello” and there are no goodbyes in the tribal language but there is gratitude for the gifts of the earth expressed by “Iimlemtsh” for “thank you.” At first, they were opposed to the idea of gaming but success with casinos among other tribes convinced them to build the Casino Resort. They hold true to their values by donating 5% back to education through their wellness program. In the resort, tribal artists teach guests their techniques of painting and beading in Lifeways Workshops.

Back at the Bison Ranch, owners Warren and Melissa Howard began with a bull and two cows and a herd has grown from there. When she throws buckets of pellets over the fence the herd comes running for the treats. She warns us to keep a lined distance away as they can’t be trusted. They can jump the fence to which she has turned off the electricity. When they seem rambunctious, we ask if she might turn it back on. She laughs and then relates a funny story about one young bull they purchased who had a wandering eye. It so happens they are located next to a nudist resort (for sale in case you are interested) and this bull took the leap for a peek. Melissa did not go into detail about “the horrible sights we endured” while chasing him for hours. Apparently, not all resort bodies are model worthy. After successfully corralling the rove bison through several gates to the inside of the ranch, he bolted left and made another getaway. “Shoot him” was the sentiment. Raising more bison for preservation, education and meat is the objective of the ranch. Tours optionally include a tasty meal. As the first native inhabitants, bison carry great meaning to the tribe which partnered with Spokane, Kalispell and Flathead tribes to hunt buffalo as a rite of passage. Now they partner with the ranchers for tours.

Golfers might enjoy same day replay discounts and stay and play packages are available. We highly recommend also visiting and playing the Coeur d’Alene Resort Golf Course just 30 minutes away. While it is famous for its island green, the other 17 pristine holes each stand on their own. The service here is remarkable as caddies meet golfers at the dock when arriving by boat from the resort and a “Putter Boat” transports players from the same dock to the island green after their tee shot. The driving range feeds balls out into Lake Coeur d’Alene, the centerpiece of the area. Come for the day and you will want to stay.

Back at the Coeur d’Alene Casino Resort, more entertainment is scheduled at the Chinook and Nighthawk Lounges including musical concerts, native dancers and mixed martial arts. The Casino boasts the most games and the most winners in the area, with over 1600 video gaming machines, high stakes bingo and off-track betting.

Another big draw to the Coeur d’Alene Casino Resort is the Spa Ssakwa’q’n, but with a 24-hour turnaround, we’ll have to save that indulgence for a mulligan trip. Executive Chef Steven Walk is a solid reason to return as well. This man loves to play in the kitchen. His culinary game produces a huckleberry brine smoked salmon (mostly sourced from the Sasquali Tribe) that is out of this world. Combined with a northwest or twisted salad with hazelnuts, healthy eating is delicious and an easy choice until of course the fried bread comes along with huckleberry honey-irresistible! Several dining venues carry out his end game including Twisted Earth Grill, named after the chief’s son meaning “one who gets lost.” Guests may get lost in thought in the Spa Tower lobby sitting on the couch in front of the mesmerizing fire behind glass. Coeur d’Alene is the name given to the tribe by the French, meaning “heart of the awl” for their tough trading practices. Guests may find it tough to leave but when they do they will want to say, “Iimlemtsh”.