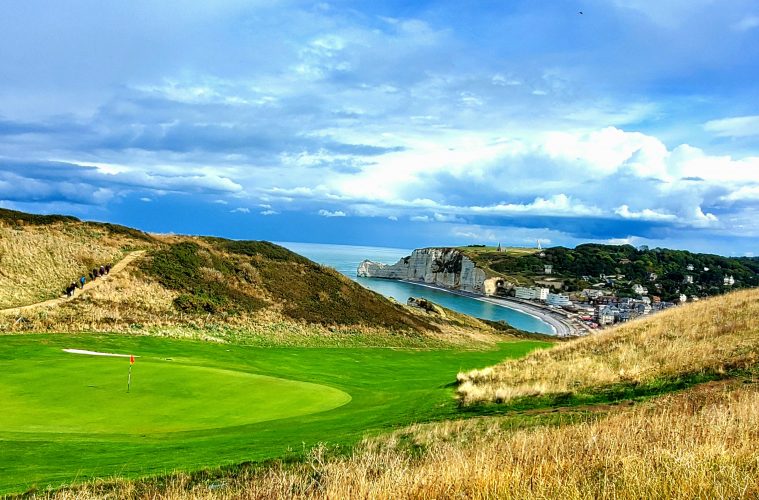 Golf in France – Paris to Normandy

Eighteen years ago, we flew to Nice and loved the beach side Promenade des Anglaise, a hairpin scooter ride up to the City of Eze, and a Monte Carlo evening of elegance, but we played no golf in France. This year, our Gourmet Golf in France trip combined our golf clubs, the Moulin Rouge club, and history from Paris to Normandy with plenty of crème Brule along the way. 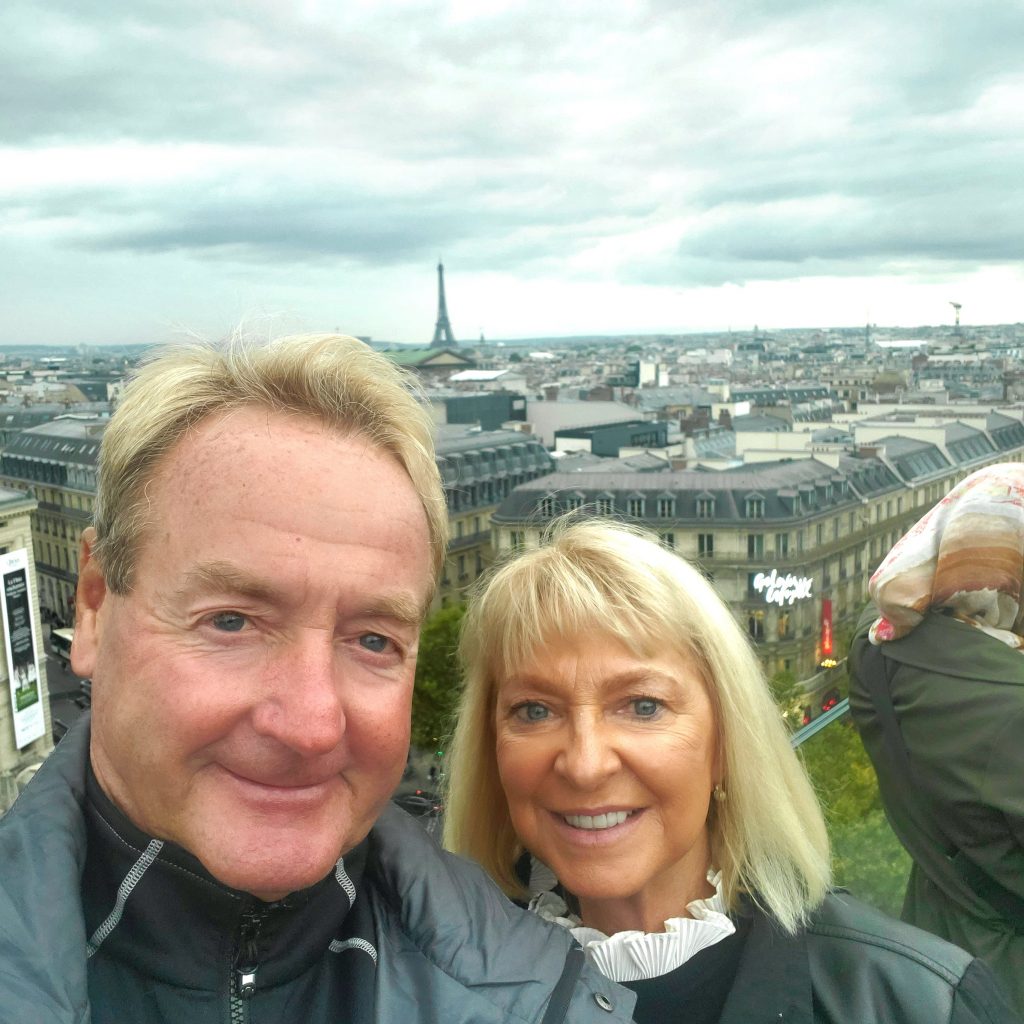 We flew through the night, arriving in Paris for the first time, by early morning light, a day before the scheduled tour and splurged on a hotel in the Opera district with a fantastic eighth floor view of the Basilica of Sainte-Clotilde.

For seven hours we walked the romantic city, first to the domed Gallerie Lafayette with an intricately painted cupola ceiling and a rooftop photo op with the Eiffel Tower. On to the Champs-Élysées. The incredible Louvre is larger than imagined and the exterior sculpting and grounds are themselves a museum. Then of course came the Arc de Triomphe, stopping for espresso, lunch, and wine at whim at street tables primed for people watching as Parisians and tourists strolled by. 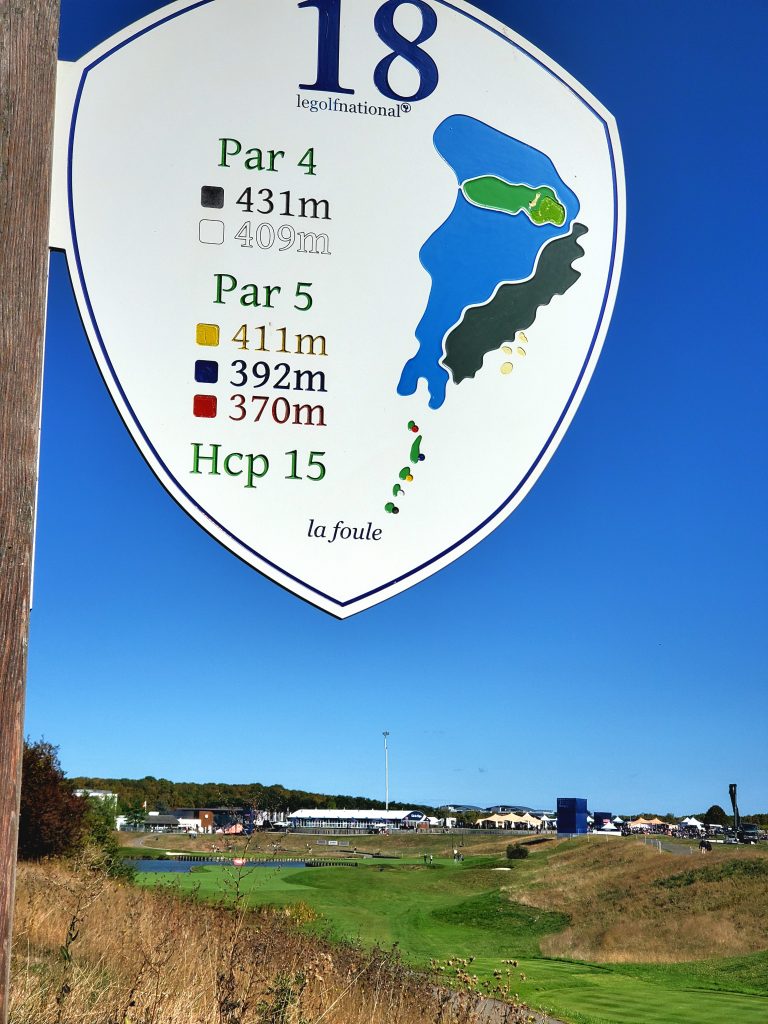 Our official Golf in France tour began with a day pass to the DP World Tour Open de France at Le Golf National, sponsored by Cazoo, a car rental company with the motto “forget, roll, smile.”

The impressive course was host to the 2018 Ryder Cup and they proudly hang the flag signed by the American losers in the adjoining hotel – Novotel Saint-Quentin en Yvelines.

We caught Megliozzi’s winning putt on video after studying the course which will also be home to the 2024 Olympic Golf competition.

An introduction to Gourmet Golf at the Performance Center included fine French champagne and wines with pretty, little mystery canapes and delectable creamed crab and lobster croissants, plus tasty pastries for dessert.

The convenient Novatel hotel is in the economic hub of Saint-Quentin-en-Yvelines with 131 refurbished rooms, some with views of the course and many labeled with the Ryder cup player’s name who stayed within. 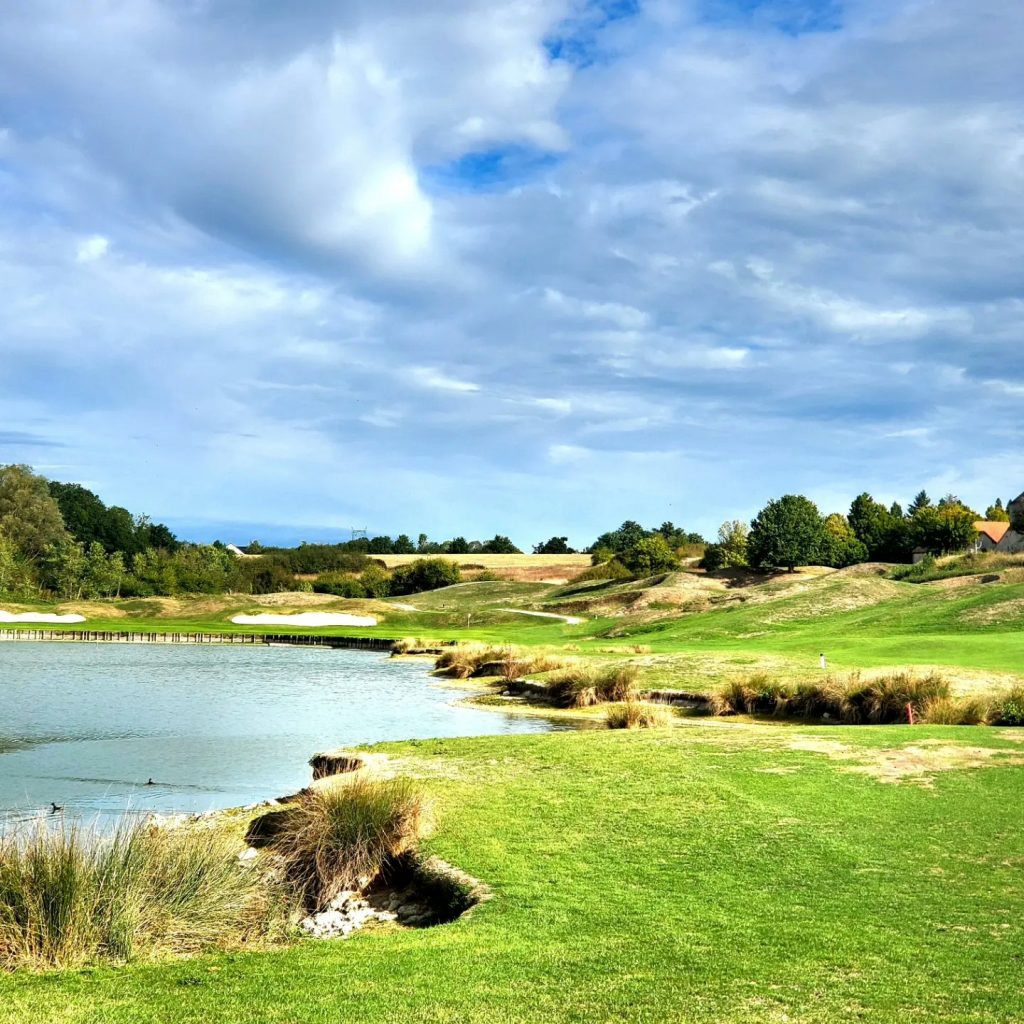 Ugolf Courson is a short bus ride away. Part of the Ugolf consortium (more than 100 courses managed worldwide), it is one of the most reputed around Paris, having hosted the French Open Qualifiers for 12 years.

Clubs are set on trolleys for a push and play round on the former farmland, where paths are worn by cattle and 31 years of golfers.

Four colorful nines wind through French forests beside eight ponds. The Iris or violet and the Black or Noir for us was a peaceful and speedy 18 leading back to the converted farmhouse for a relaxing pause until transfer to Le Louis Versailles Château MGallery, our exquisite home for the night.

The Château is right next to the Palace Versailles with a spectacular courtyard and gardens if you don’t have time to tour the inside of the palace.

That evening Alexandra Barton, President of Golf in France, narrated our bus ride back to Paris city center with her sweet, accented English sounding like a French song. Again, we passed the famous sights and under the short bridge where Lady Diana met her demise, sending shivers.

Traffic was insane but our driver was a pro delivering us safely to Moulin Rouge for a dinner and show. Starting again with champagne and on to wine, three courses were served while preshow singers warmed up the audience for the collage of performers in the original Cabaret theater. All in good taste, topless dancers mix with thinly veiled companions to perform many musical dance routines. If only we had subtitles for some of the lines, but you certainly get the gist. Cirque du Soleil meets Cancan Cabaret interspersed with a skating couple on a tiny platform, Mr. Physique feats and an aquarium rising on the front stage filled with synchronized pythons twining around a crazy swimming femme. It is a wild combination that constitutes the Paris party spirit since 1889. Bonsoir and merci, Paris!

On to Normandy where the coast town Deauville was built between 1860-64 by businessman DeMorny, for holiday and leisure with a two-hour train or car ride from Paris. The population of 4,000 grows seven times with vacationers attracted to the beach and equestrian events – polo, racing and quarter horse breeding.

The 19th century architecture is preserved without damage from WWII. Famous for the American Film Festival since 1975, 69 movie stars are commemorated along the beach like the Hollywood walk of fame. Luxury brand stores line the streets where Coco Chanel opened her shop in 1913 with her mariner stripe and beige fashions inspired by this beach. 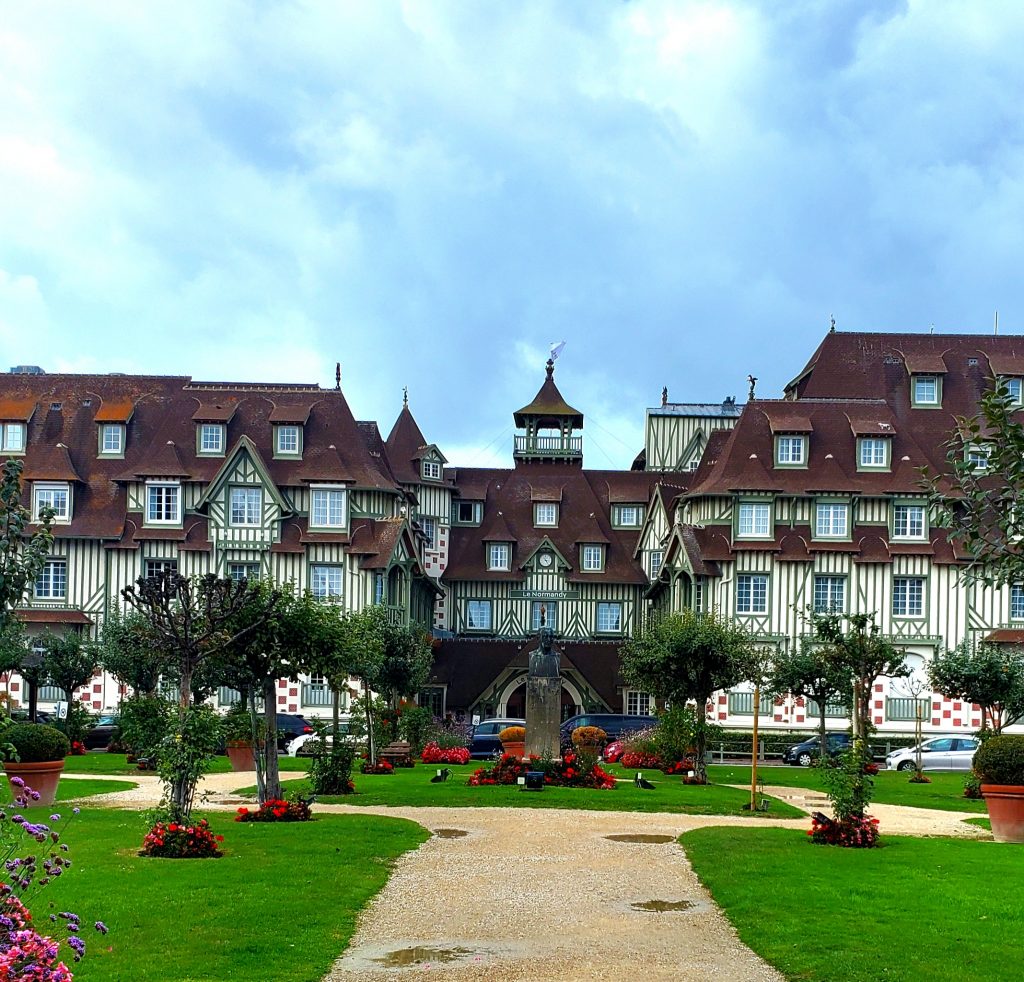 L’Hôtel Barrière Le Normandy is front and center in the plaza, serving as a prime example of Barrière – a leading name in the luxury hotel industry and biggest casino group in Europe. Cozy bedrooms facing the sea might glimpse horse riders trotting through the waves. 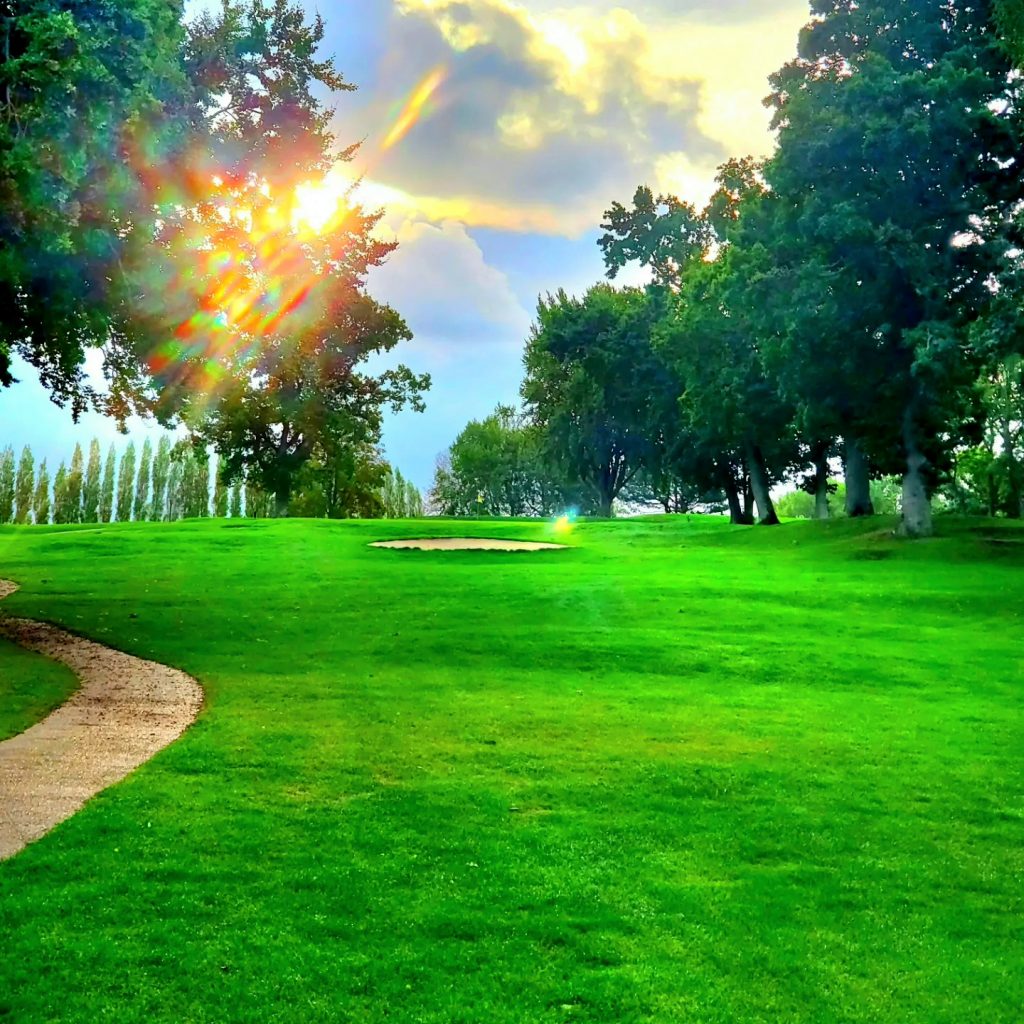 Sunbathers were absent on our crisp, windy day but that didn’t stop our golf round at “New Golf” Course on the premise of Hotel du Golf Deauville, another Barrière property adorned with Scottish tartans and Chesterfield furniture for a casual, contemporary atmosphere, again with beach views, though farther away.

“New Golf” Course is next to the English Channel with fairways lined by Cypress and French oaks. Falling leaves with acorns and apples dropping from trees announced the arrival of autumn in Normandy. The back nine is a bit more difficult than the front but also with more impressive views.

Over the wooden bridge to #11 is the Barrière hotel to the right, beach, and cliff in the distance to the left. Normand baroque architected homes with authentic thatched roofs are charming alongside the course. A centuries old castle wall looms between a couple fairways without coming in to play and a sailboat regatta was spotted at sea. This is where the LET Lacoste Ladies Open de France in Deauville played a week earlier with Ines Laklalech winning at 11 under. Check out Barrière golf packages. 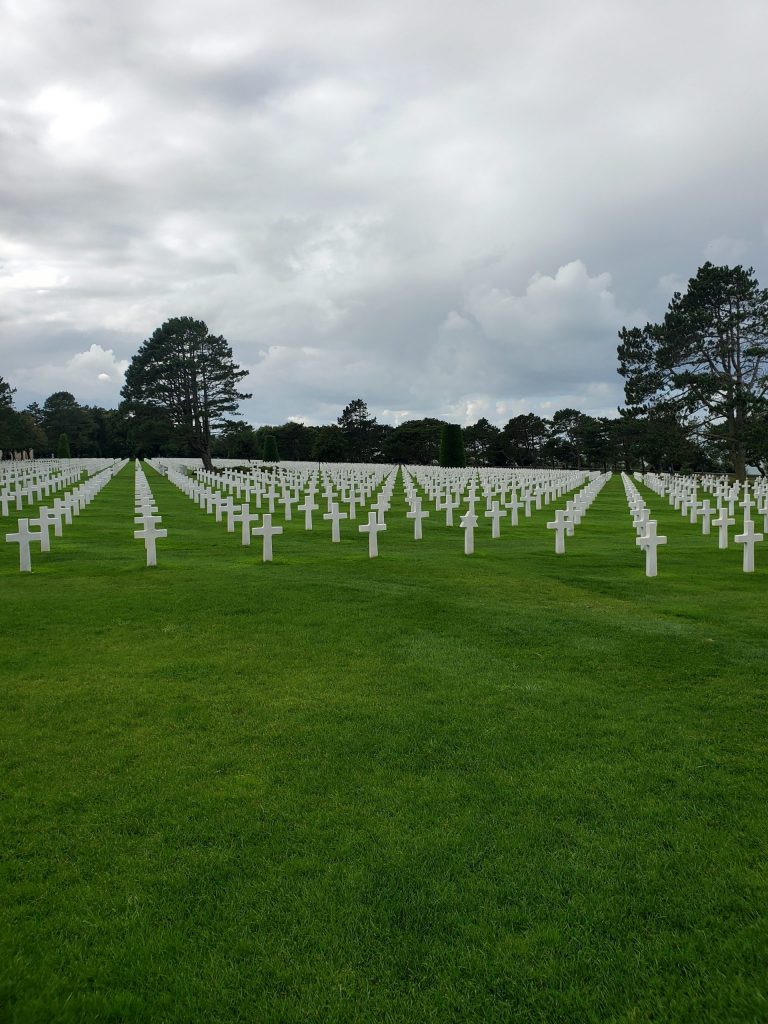 Next up was the sobering tour for which Normandy is well renowned, D-Day landing and the American Cemetery of World War II.

Two million visitors a year come to the 170 acres to honor the 9,388 bodies buried in no special order, all with the same tombstone in neat rows that seem to go on for eternity.

147 stones are marked with the Jewish Star of David, the rest with a cross, and all with the dog tag number on back for identification. Giant walls opposite the graves, list the names of 1,057 missing in action, with maps and descriptions of the battles on the beach below and hills of Normandy above.

The most meaningful way to experience the memorial is with Vincent Huet’s Gold Beach Company guides, relating stories of individual soldiers, including Baumgartner who survived unfathomable atrocities and with a photographic memory, wrote detailed books about it all.

The battle of Omaha Beach is well depicted from different vantage points overlooking the now beautiful setting where sunbathers lounge and sailboats glide across the peaceful water. One such point is at Omaha Beach Golf Club.

Behind the 11th green is not only a wide beach view but a bunker sans sand – an original cement war bunker to descend and walk through as if in a movie, to the opening where guns once protected the soldiers within. You can feel the warm relief in the shelter that the soldiers must have appreciated, after bracing the frigid, wet wind outside. Omaha Beach Golf Club has two courses and a fine restaurant in the clubhouse converted from the old farmhouse on the land.

Dinner with co-owner Monsieur Dupont and his wife Karen was another gourmet delight with fresh oysters and more stories. They met at a party when Karen, from the states, lived in the “cemetery house” as her military dad took the post of managing the memorial. Her family hosted many dignitaries through the years including Arnold Palmer and his wife Winnie shortly before her passing.

Arnie had promised no golf on that French trip, but Karen invited them to simply come to Omaha Beach Golf Club for lunch without media. They loved the calvados, (a digestive, apple liqueur made in Normandy with 40% alcohol) and decided to tour the course. While on that 11th green, a ball with Arnie’s name etched on it struck him so he waited for the group to come up, shocked his fans and invited them for a calvados after their round. A photo and thank you note from Arnie commemorate the event.

We questioned as many do before going to Normandy, is it sacrilege to enjoy a round of golf where so many died in battle? It felt like an honor for us to play on the prestigious and gorgeous courses of Normandy while respecting its history. 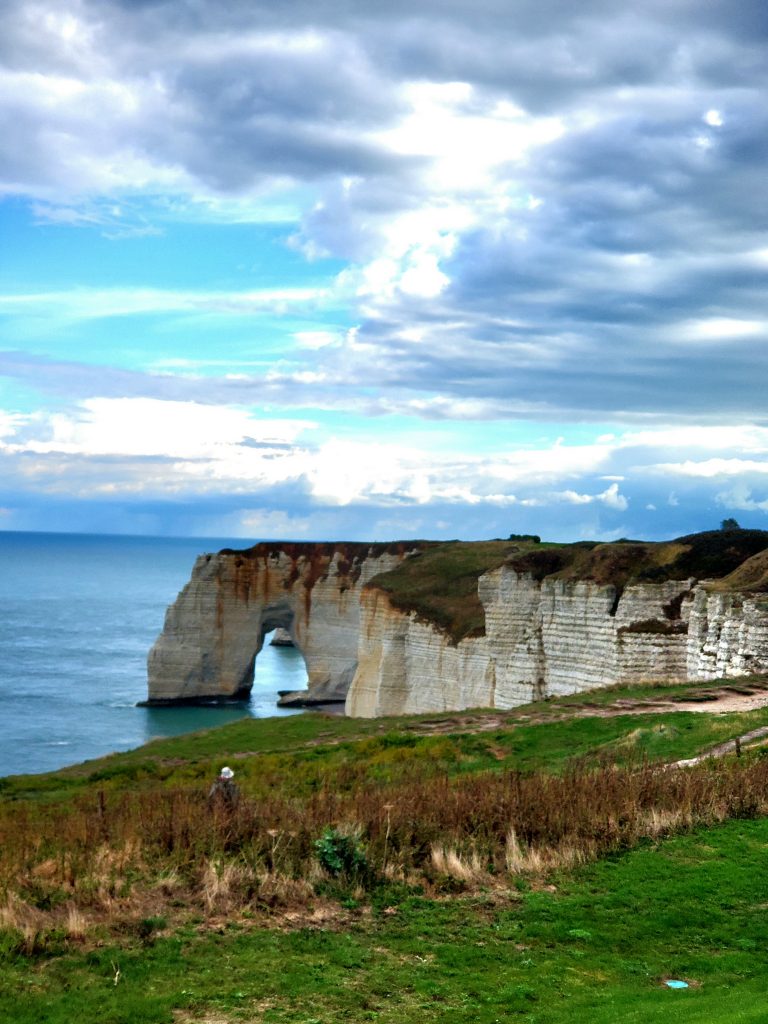 Another jaw dropping stretch of Normandy beach lines the d’Etretat Golf Course which celebrated its centennial in 2008. Golfers must pause and recompose before swinging due to the dramatic cliffside sea views from every hole, especially the amazing numbers 10 and 18. The clubhouse restaurant is perfectly poised to absorb the captivating vistas of the white chalk cliffs and arch over the channel, with more great cuisine served. This is after all, gourmet golf.

Play Golf in France is a consortium which was established in 2022 with the support of the French Golf Federation, to promote France as a great golf destination to international golfers. It has more than 100 members, including Private Key. See www.playgolfinfrance.com for the many golf and culture options in different French regions.