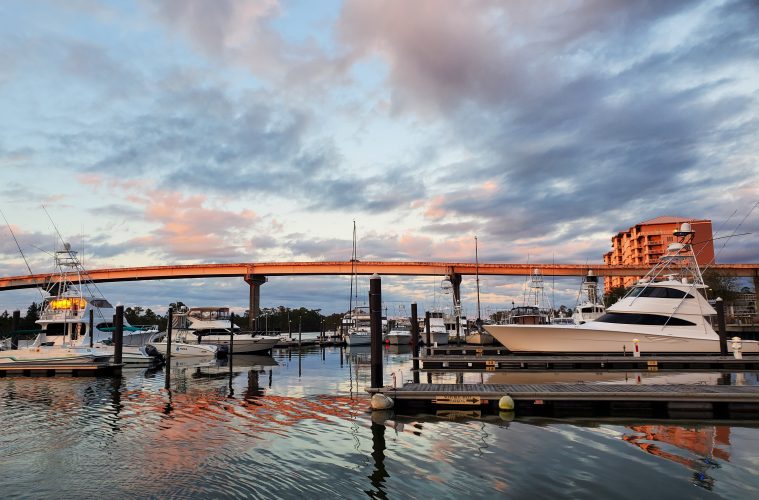 Baldwin County is the fastest growing county in Alabama due to the almost tropical climate and white sandy beaches in Gulf Shores & Orange Beach. It is an island resulting from the WPA canal project where locals and tourists enjoy the salty sea along the Gulf stretch, in Mobile Bay and Perdido Bay as well as interior freshwater streams and lakes. Activities are endless on land and water. Topping the list are golf, dining, and aquatics.

Peninsula has three fun nines designed by Earl Stone. The Marsh Course begins beside a lake which is home to a gator named Lefty. Architecture of human residences along fairways is varied – no cookie cutter here. The greens are new and true, seeded within the past two years, though a bit fast and slick for pin placement number two which is positioned on the pachyderm buried below to roll slightly in wrong directions. Two putts are honored. The Cypress Course is landscaped with said trees in addition to magnolias, pines, and azaleas. Horizontal lakes continue here, and deer tracks may be found in the bunkers, filled with the similar white beach sand. Peninsula is situated next to Bon Secour Wildlife Refuge with wild wetlands. Between holes 11 and 12, a boardwalk side tour through the woods, notes vegetation identification and a pier overlooks Mobile Bay for fishing or daydreaming. The Cypress greens are not quite as fast, and the two-position pin placement is kinder. The Lakes Course completes the golf trifecta at Peninsula with signature number 7 next to the beautiful open bay. Twig carrying herons swoop magnificently through the air, teaming to build their palaces in the loblolly pines. Red apples mark the extra set of Honours members’ tees even though it is now managed by Troon. The restaurant serves a variety of food and full bar with daily specials for nourishment between the nines. Craft Farms is also managed by Troon with the Cypress Bend and Cotton Creek par 72 courses. Cypress Bend has white picket fences, wide-open spaces, and Alabama Zoo across from the third tee box. A tricky par 5 serves as a pretty finishing hole with a long wooden bridge. Cotton Creek is the original course where on a day with many ducks, geese, and a cold wind you might think you’re in the north. A snowy white egret’s feathers danced in the wind while ospreys echoed a Valentine’s love song. A crisp, new clubhouse was built since Hurricane Sally hit. Much of Gulf Shores & Orange Beach has received a face-lift, making lemonade out of Sally’s lemons. 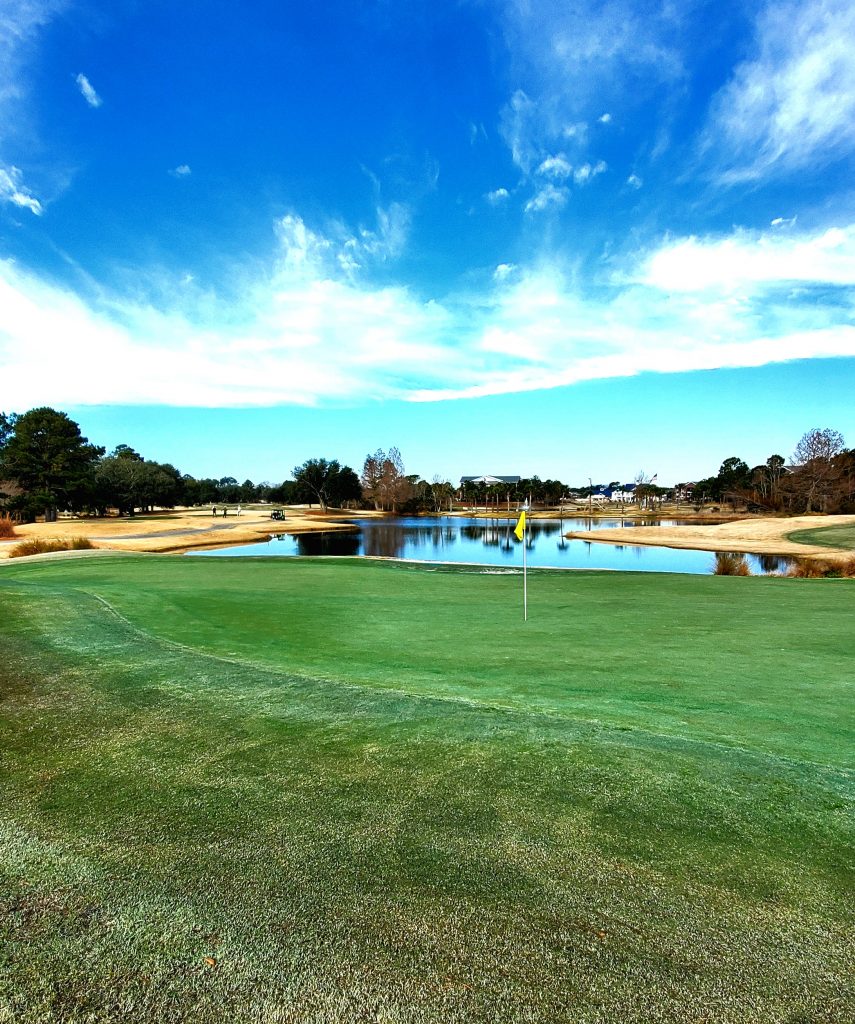 Kiva Dunes, designed by Jerry Pate was dramatically impacted by Sally taking trees in her path. Additional trees were then removed purposely for a matching flow so that it has a more coastal links feel now. On number 3’s par 3 lake along the right side, the day we played, a jumbo-sized gator was positioned as if entering the water but so still that we questioned if it were fake. We were assured that he is real, though normally seen on the opposing bank. A couple of golf balls beside him were judiciously abandoned. The natural dunes running through the wetlands at Kiva Dunes is considered a protected area and balls may not be retrieved there either so bring plenty. The crisscross nature over the dunes and water of numbers 6 and 9 makes them a doozey to manage. Penalty is one stroke for lateral hazard in the protected areas so avoid hitting those dunes in the fairways and walk the beach after golf instead.  The pro shop and restaurant, both well stocked and serviced overlook the 18th green. Gulf Shores Golf Club was the first to be built in Gulf Shores in the 60s by father and son team Jay and Carter Morrish and was renovated under their guidance in 2005. For over 30 years, Harriet has welcomed golfers to the iconic clubhouse with a 360-degree upper deck for prime viewing before or after the round.  The fairways and greens appear dormant, but the course comes alive in a charming way with herons, snowy egrets, and the friendly logo squirrels.

Lodging options are abundant on the island, none better than the newly renovated Perdido Beach Resort in Orange Beach where you can listen to the waves lapping the shoreline day and night. Dolphins sporadically swim by the coastline as pelicans dive for fish and boats float or zoom. Join in a beach volleyball game or stroll on the sugar white sand, so clean it squeaks beneath your feet. The indoor/outdoor pool with Jacuzzis has an ocean view as does the workout room for added incentive. Best view of all might be the private balcony outside your spacious, comfy accommodations with equally impressive sunrises and sunsets. 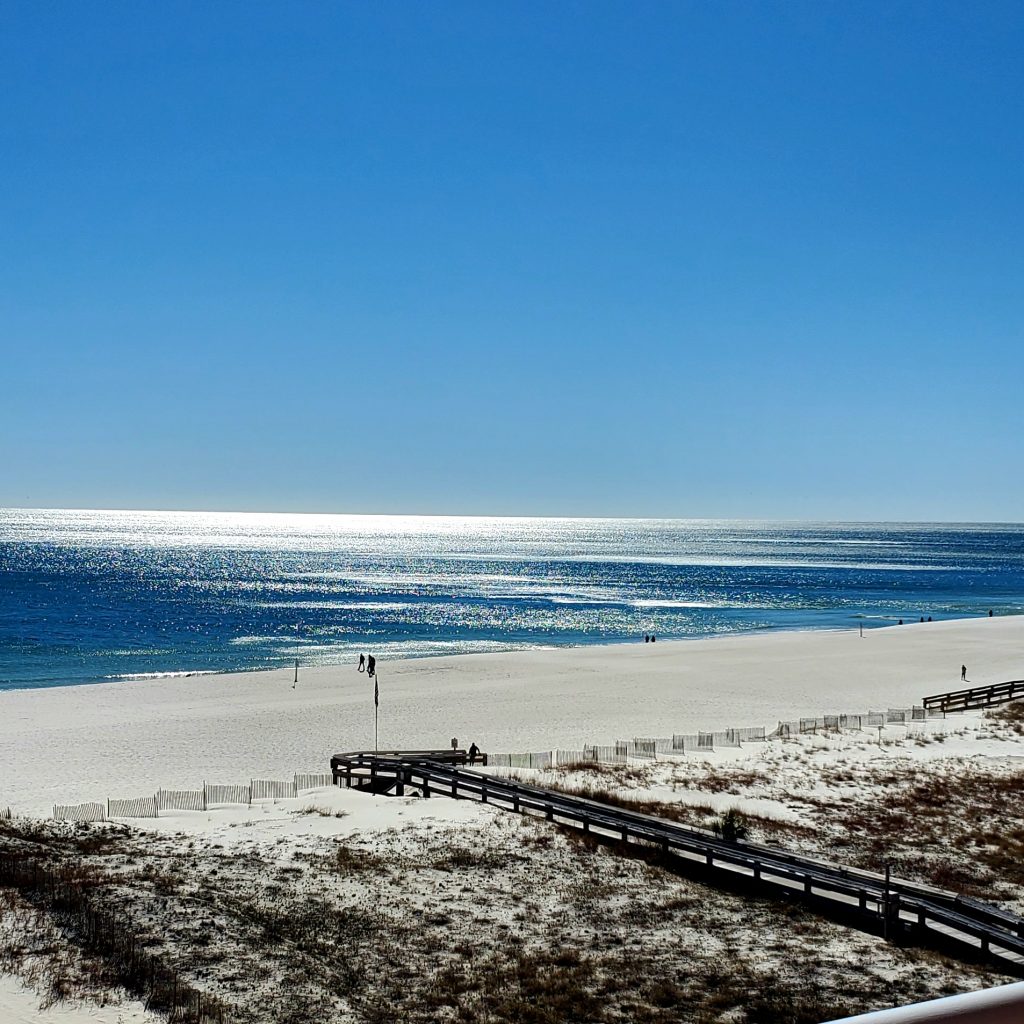 Ms. Nancy’s Lobby Lounge greets guests with the first ocean view and a grand piano for evening music and dancing. Latitudes is their casual restaurant with sports screens while Voyagers is an upscale experience.  A pizza café is downstairs and the first we’ve ever seen, a Salad Robot. Pick your veggies and they fall into a container that dispenses like a snickers bar in a candy machine.

Flora Bama Lounge is a honky tonk on the state line between Florida and Alabama where Kenny Chesney and Jimmy Buffet are among the famous to have performed.  A song writer festival will rock the joint in November and every Sunday hymns are sung at Church services held in this unofficial Packers bar. God love ‘em. Meanwhile the open-air Flora Bama Yacht Club across the street is a cross between a beach and sports bar. It’s all about the seafood wherever you go on the island. Oysters are a specialty – raw, grilled, baked, you name it, all tastily seasoned. Sustainability is important to the region and oyster shell recycling is proof of that. All the shells are spray washed clean, dried in the sun across the canal and shot back into the oyster reef.

The Gulf restaurant delivers their fresh catch, shrimp tacos or burgers with a full bar and tables on deck or on the sandy beach. After dinner, retreat to the firepit on the beach to swap stories with fellow travelers. Sunliner Diner is a throwback to the 50s, complete with antique cars. Island Wing Company on the other hand is a new franchise bucking the Southern fried trend. Instead, everything is baked and so good you’ll want to try it at home. Good luck.

Fishing, parasailing, any type of boating from kayaks to schooners may be arranged at one of the numerous marinas and many restaurants will cook your catch. At the Wharf, Captain Will leads Cetacean Cruises’ Dolphin and Eco Tour, especially fun for families with wee ones.

Gulf Shores and Orange Beach in Alabama is an idyllic destination for all. www.gulfshores.com 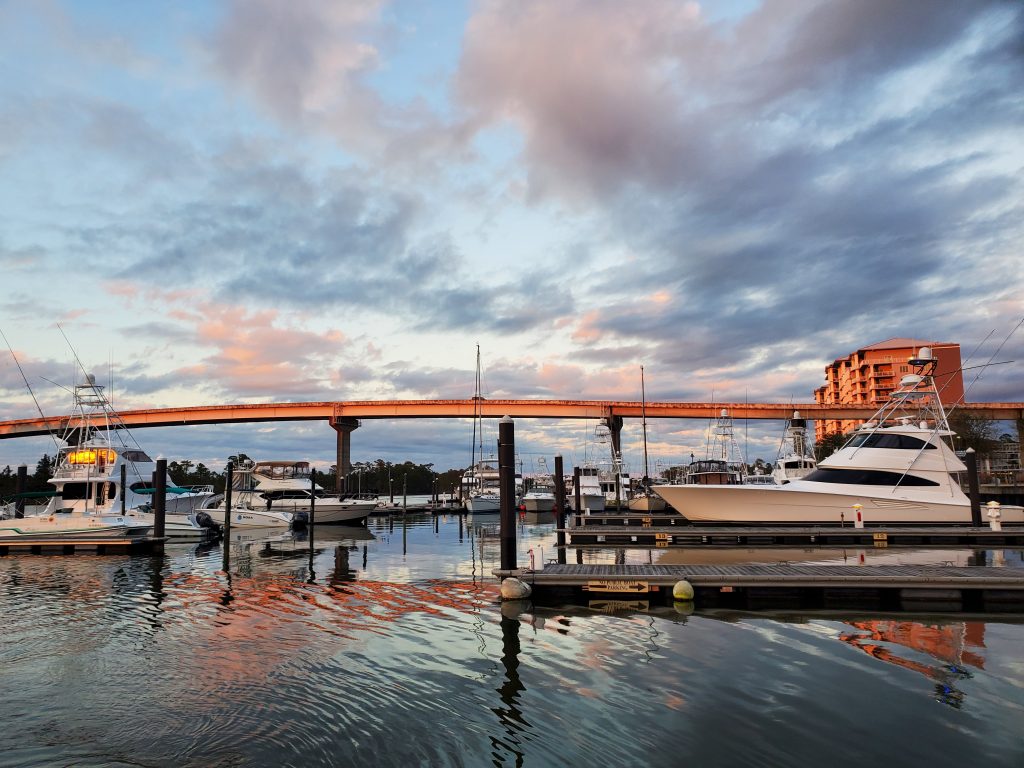