Golf Resort Vacations in The Heartland

There are very few places that offer a walk back in time, to an era when life moved at a slower pace, where moments became memories that were cherished, in a place that for generations that has been one of America’s favorite places to be. This is French Lick. For more than 175 years, a lodging establishment has operated at the current site of French Lick Springs Hotel. In 2005, French Lick Springs Hotel was purchased by Indiana-based Cook Group, Inc. and after a complete restoration, it returned the hotel back to its historic splendor.

Nestled among the hills of Southern Indiana’s Hoosier National Forest is a classic American destination: French Lick Resort. Home to two AAA Four-Diamond nationally historic hotels, three challenging golf courses, two world-class spas, impressive meeting venues and 24/7 gaming at French Lick Casino, our scenic 3,200 acres are yours to explore. Experience the ultimate in golf at The Pete Dye Course at French Lick, voted No. 1 in Indiana on GolfWeek’s “Best You Can Play” for 13 years in a row. The Donald Ross Course at French Lick has been named Indiana’s No. 2 course by GolfWeek every year since 2011. French Lick Resort is family-friendly, business-competent and perfect for a planned or impromptu getaway with dining, shopping, special events, live music and concerts, stables and more.

French Lick was originally a French trading post built near a spring and salt lick It later became popular for its casinos and entertainment.

Known as a spa town by the turn of the 19th century, people from all across the country would make their way to French Lick. “But they also thought when you drink the water, it’s just going to make you feel, wonderful. But there’s more to this town than just a casino and a unique name, it’s also the place where Larry Bird was born and raised. “He set the bar high here for a lot of kids gave them a lot of hope,” said Alisha Tomlinson.

Tomlinson is the manager of 33 Brick Street, a local sports bar owned by one of Bird’s childhood friends. And all throughout the restaurant, original Larry Bird trophies can be found. Everything from his 1985-86 NBA MVP trophy to his 1992 Olympic gold medal jacket.

All in all, French Lick is a memorable place with more than a memorable name. It is simply home to some of the finest golf in middle America. On the resorts famed Donald Ross Course, competitive women’s golf got its start here in French Lick in 1958 with The French Lick Women’s Open. The event was such a success, the next two LPGA Championships were held here in 1959 and 1960 when Micky Wright won her 4th of 13 major titles in her career.

In 2015 The Pete Dye Course at French Lick hosted the Senior PGA Championship, won by Colin Montgomerie. The Dye course is ranked as one of the top golf courses in the country year after year as is the Donald Ross course which was designed and built in 1917.

Nothing Beats a Day on a French Lick Golf Course.

Welcome to French Lick — Indiana golf enthusiasts’ paradise. You haven’t played the best until you’ve teed off on a French Lick Resort golf course. These three French Lick golf courses are some of the finest in the state and offer 45 holes of play for days entertainment – perfect for getaways with friends or a few rounds on your own.

Few things get the blood pumping like the mention of Donald Ross, Pete Dye and Tom Benedelow in the same sentence.  Nowhere else in the world can a golfer play courses designed by each of these noted and prolific designers at one resort destination. The premium lodging at the historic French Lick Hotel and West Baden Springs Hotel add an air of luxury to the experience. To play a French Lick golf course is to play some of America’s finest.

Considered one of Donald Ross’ most challenging designs, a $4.6 million restoration brought the course back to his original plans. The Donald Ross Course brings a rich history to French Lick Resort. The course was site of the 1924 PGA Championship won by the legendary Walter Hagen and has hosted other golf greats and celebrities such as Gene Sarazen, Chick Evans and Bing Crosby.

Named one of America’s Greatest Courses by Golf Digest and Indiana’s Course of the Year.  Host Site of the 2015 Senior PGA Championship, this course will prove challenging for even the best players in the game. Atop one of the highest points in Indiana, the Pete Dye Course offers panoramic views of the countryside that extend for over 40 miles in all directions.

Designed by Tom Benedelow the Nine-hole public golf course is great for beginners or professionals alike. Enjoy the full-service clubhouse, pro-shop and restaurant. The Valley Links Course is a nine-hole, fully walkable conversion of the 18-hole Tom Benedelow design that was original to French Lick Springs Hotel.

Sultan’s Run Golf Club, located 30 minutes away in Jasper, adds yet another championship course to the world-class offerings at French Lick Resort. Play the Ross, Dye and Sultan’s Run, all part of a great golf getaway. Sultan’s Run was designed by Pete Dye disciple Tim Liddy and offers a tremendous parkland layout with rolling hills, wonderful bunkering and a waterfall behind the 18th green, making it one of Indiana’s most scenic layouts.

The Snake on The Mountain Pete Dye’s Course

Pete Dye’s mountaintop design, Golf Digest’s 2009 Best New Public winner, established that at age 80 the designer still had fresh ideas, including rumpled chipping swales, country-lane cart paths and volcano bunkers. Measuring just over 8,100 yards from the tips, Pete Dye at French Lick is not the first course over 8,000 yards. That would be Runaway Brook in Massachusetts, now called the Pines Course at The International Golf Club. It was 8,040 yards when ranked in 1967. Today it’s 8,325 yards. The world’s longest is Jade Dragon Snow Mountain in China at 8,415 yards.

“The Pete Dye Course at French Lick is one of the best courses in the United States. It is a brilliant Dye course built in the hills of southern Indiana. The course is built on a hill and traverses around that hill with incredible views of the surrounding country side. The top of the hill is a beautiful mansion built many years ago that offers a restaurant and outdoor sitting area that is a stunning place to see the course. The course itself offers great conditions with wonderful bent grass fairways and greens that are in excellent shape. The greens are fast and firm with subtle breaks. The greens are surrounded by runoff areas that test the best short game. The ravines that you must play over on the course make it quite exciting. The bunkers are very unique and look like sand sitting on top of a volcano in many places. There are some very difficult holes. The par threes on the backside are incredible. One is a redan style hole and the other is a long demanding one shot hole with water all down the right side of the approach. This course is an amazing collection of Dye holes that remind you of The Golf Club, Crooked Stick, and TPC Sawgrass. To visit French Lick https://www.frenchlick.com/golf 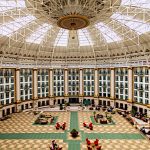 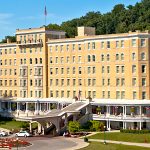 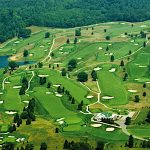 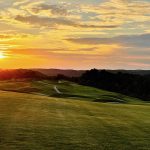 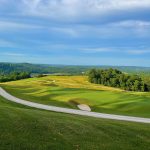 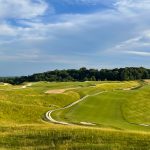 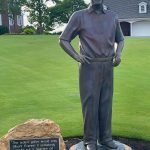 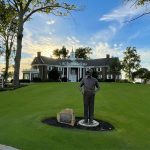