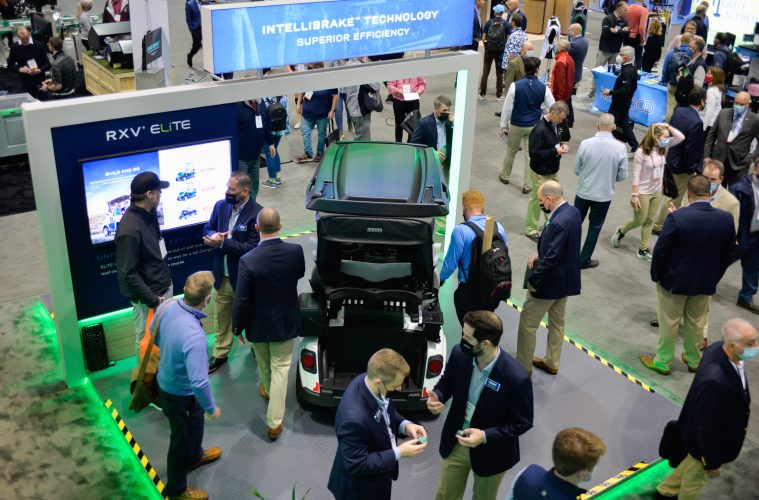 Orlando, FL. Last week’s PGA Show in Orlando provided a return to center stage given the 2020’s event cancellation because of the global pandemic. However, the re-emergence this year was far from anything eye-opening save for the unseasonably chilly temperatures and persistent rain showers which dogged much of the event.
The “Sunshine” State was certainly absent from the 69th rendition of golf’s biggest merchandising extravaganza. For Tuesday’s demo day event, held at nearby Orange County National Golf Club, the generally convivial vibrant atmosphere was nonexistent. 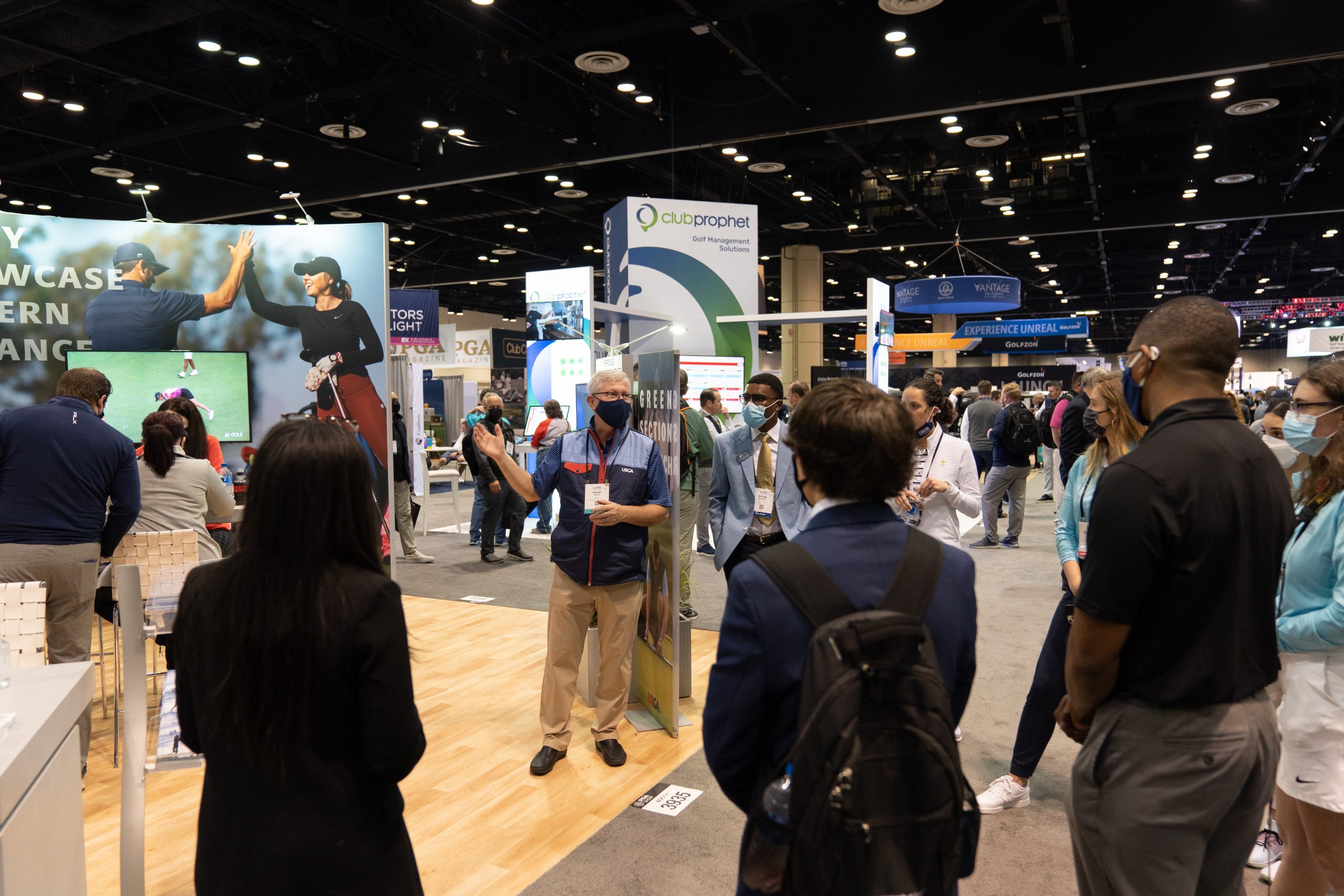 PGA WORKS Fellows tour the show floor during the 2022 PGA Show at the Orange County Convention Center on January 27, 2022 in Orlando, FL. (Photo by Hailey Garrett/PGA of America)

Leading the downside was the lack of attendance from the major equipment companies with the likes of Titleist, PING, Callaway, Cobra, Wilson and Tour Edge, among others, remaining on the sidelines. Complicating matters was the dreary bone chilling weather which drowned the spirits of those hearty souls enduring temperatures that struggled to break 50 degrees with rain drops spritzing and wind providing a noticeable bite on the cheeks.
Without the major equipment companies present the sole purpose in utilizing one of the finest practice areas in the USA became a moot point.
What normally is an energetic day that stretches from 9 AM to 5 PM became a ghost town by early afternoon. 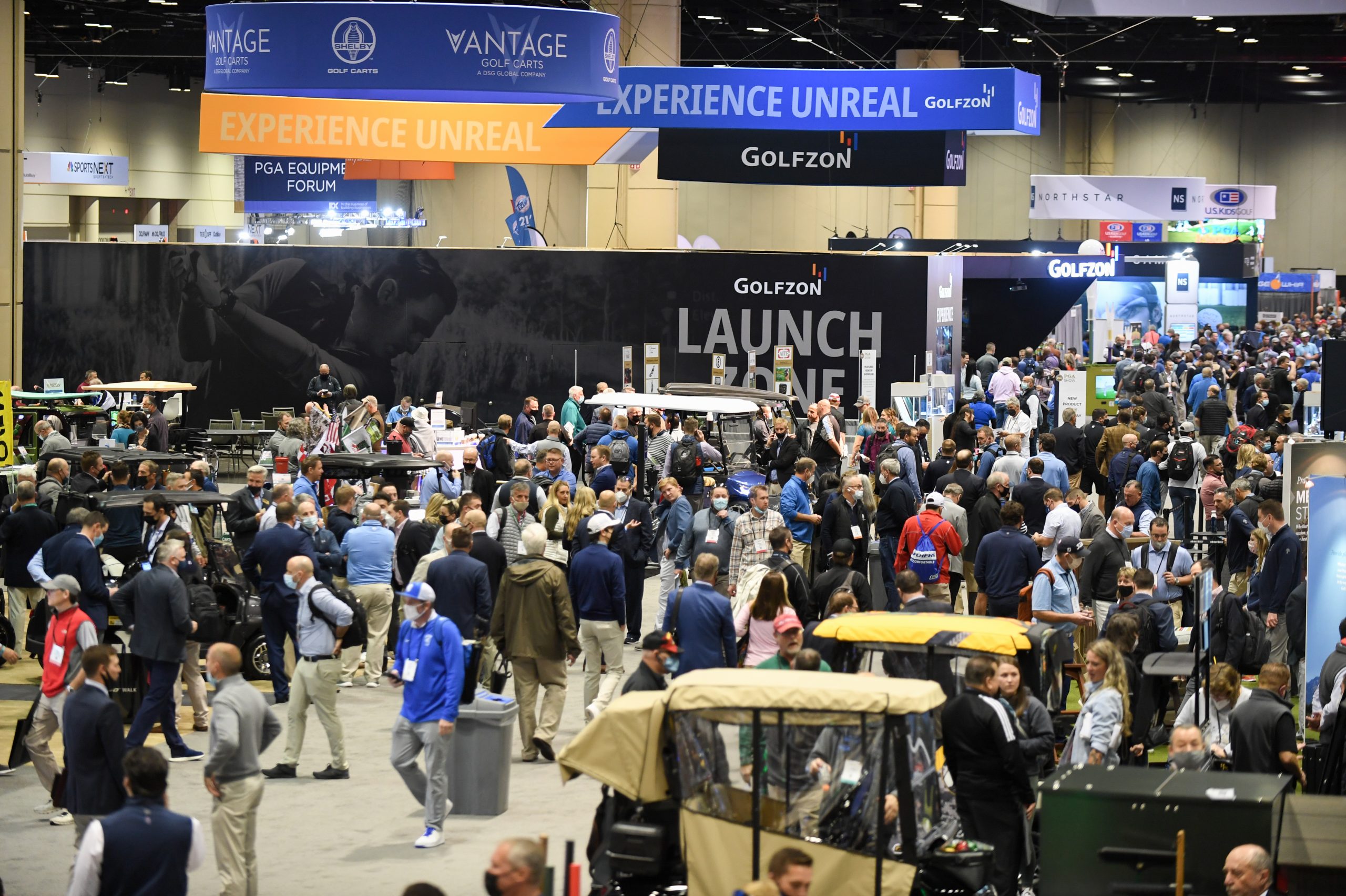 An overview during the 2022 PGA Show at the Orange County Convention Center on January 26, 2022 in Orlando, Florida. (Photo by Montana Pritchard/PGA of America)

The opening of the PGA Show on Wednesday generally is energetic– teeming crowds filling crowded walkways with countless people strolling aisle ways meeting various exhibitors. The turnout was clearly far less — upwards of 40-50% less is an educated guess but more than likely close to the mark. The enthusiasm of those present was palpable but the requirement in wearing a mask when indoors at the Orange County Convention Center provided a clear, but necessary health boundary, that diminished the human contact that those attending any trade show relish.
In years past the buzz of the show was akin to a Moroccan bazaar. Hyperkinetic energy abounding as those connected to the sport savor the networking opportunity and sensing a new golf season on the horizon.
The Show has clearly evolved over the years. Apparel companies, of all types and sizes, are the major participants now. Golf has noticeably moved towards embracing the “lifestyle” side of the equation with an array of contemporary fashion choices front and center. Nonetheless, Polo and Travis Matthews, two of the leading brands, opted to sit out the Show.

Without question the Show still resonates for the members of the PGA of America with various meetings and accreditation sessions offered to its membership of 29,000+. Longtime friendships are renewed and the wherewithal to network is still a critical dimension that comes from the annual gathering in Orlando. 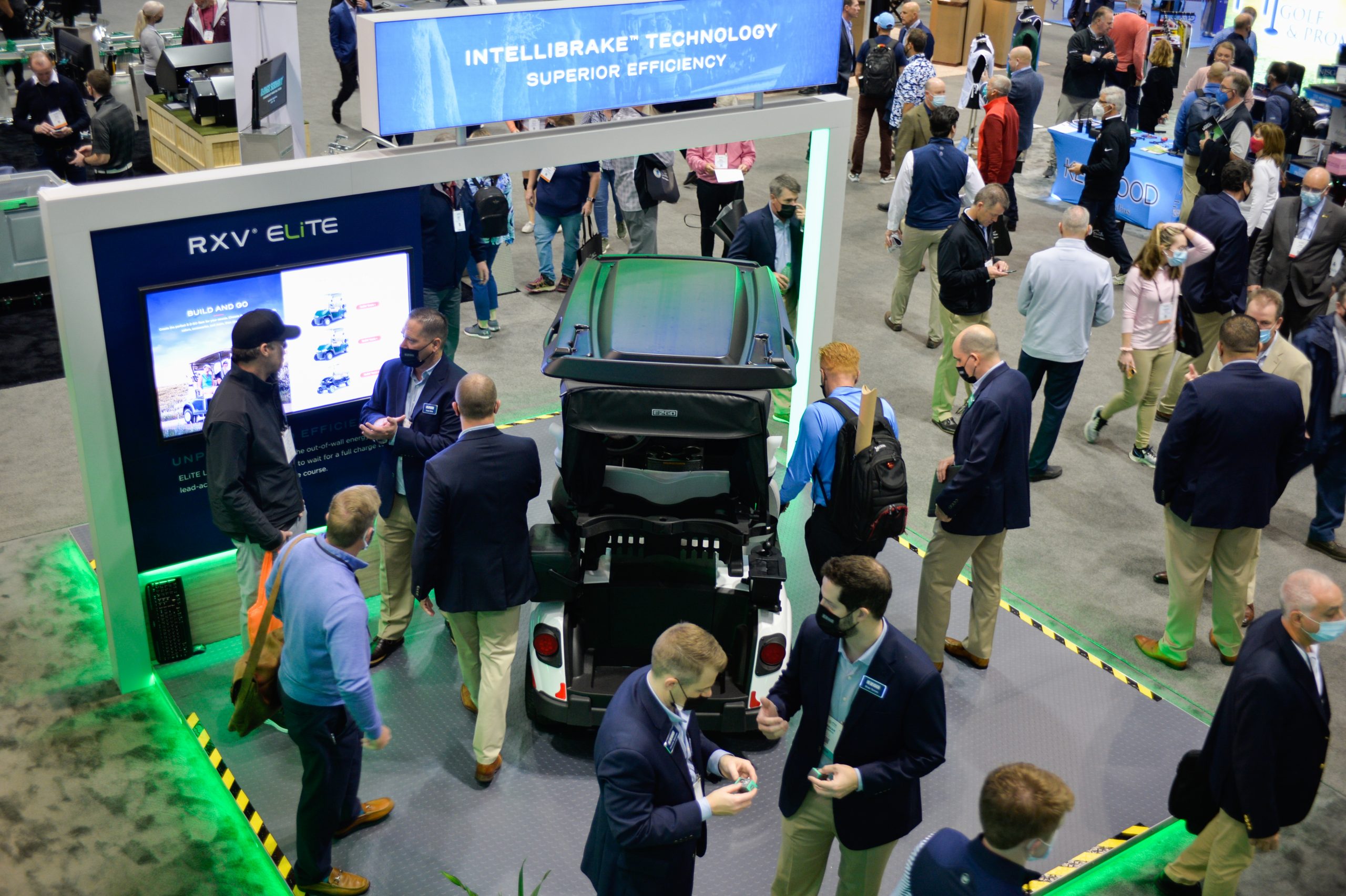 RXV Elite booth during the 2022 PGA Show at the Orange County Convention Center on January 26, 2022 in Orlando, Florida. (Photo by Montana Pritchard/PGA of America)

Even with the surge of Omicron cases preceding this year’s event the desire to hold the show after a one-year absence in ’20 was crucial in order to demonstrate resolve in moving things forward. A two-year postponement would likely have meant a far deeper hole from which to climb out.
The central goal now is getting many of the key missing exhibitors back into the fold for the ’23 event. Without their participation the relevance of the PGA Show becomes more glaring and harder to sustain. Without the original equipment manufacturers (OEMs) the Show lacks a meaningful link. The functionality of golf clubs and balls still occupies a fundamental core connection to the game and has been a major emphasis point for attendees.
In years past, the January event was the likely place where companies — most notably the major equipment providers — would announce new products. That rarely happens now. The Show has also been for a number of years a place where no serious buying occurs for the OEMs. Major equipment companies use the Show as an event to network with various key players and showing support within the broader golf community — particularly with the rank and file of the PGA of America.
Yet even with the desire to show good will the associated costs for OEMs participating as an exhibitor is anything but a cheap ticket — especially when bringing vast numbers of employees to Orlando and in creating elaborate exhibition areas showcasing their wares. Estimated costs can quickly ascend casting doubt as to whether such expenditures can be used more effectively elsewhere. 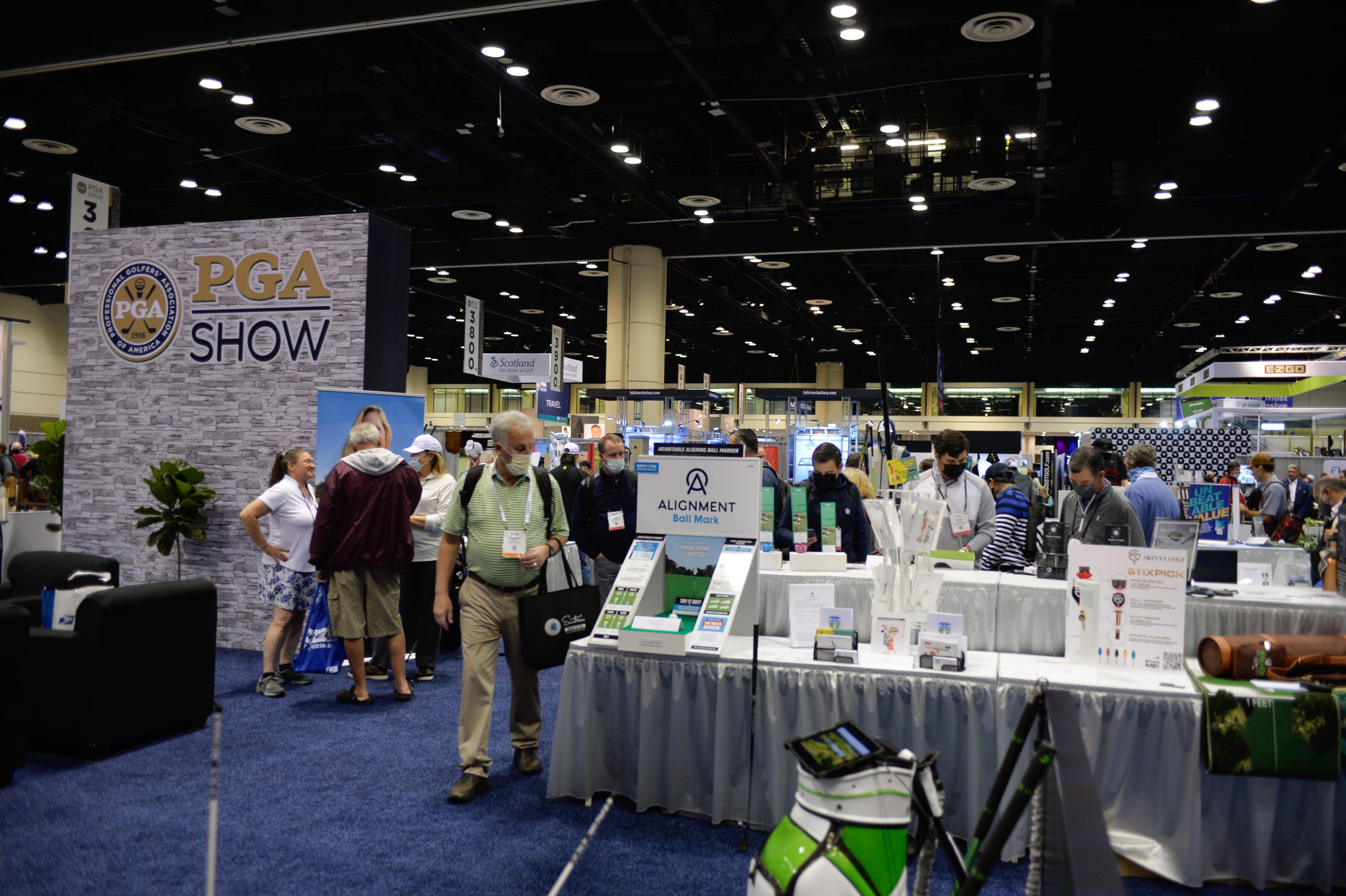 The New Product Zone during the 2022 PGA Show at the Orange County Convention Center on January 26, 2022 in Orlando, Florida. (Photo by Montana Pritchard/PGA of America)

TaylorMade last participated in the Show in 2018. The high-profile company sought other avenues to demonstrate the products it produces. Undoubtedly, others will follow that same game plan.
In years past, the Show served as the launching pad in announcing the latest innovations. Now many of the leading companies operating in the golf industry use other time lines throughout the year which they believe will center more noticeably on what they are doing instead of being swallowed up by the noise clutter that emanates from the Show.
The lone major announcement of note last week came from the highly successful Streamsong facility in central Florida announcing a fourth golf facility planned with the architectural tandem of Bill Coore and Ben Crenshaw doing the design. 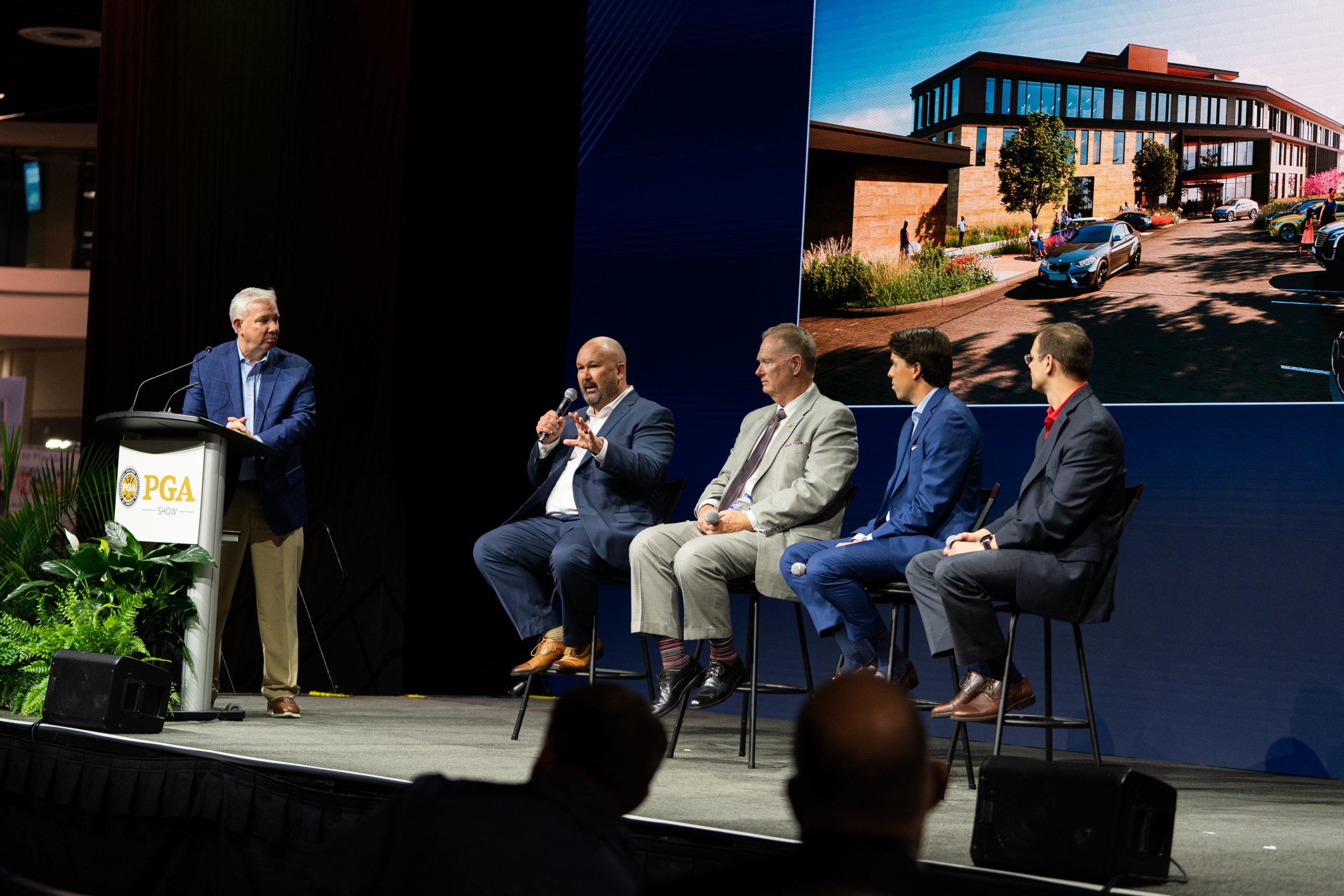 John Newkirk, PGA Senior Director of Operations – Home of the PGA speaks at the PGA Frisco Overview Panel during the 2022 PGA Show at the Orange County Convention Center on January 26, 2022 in Orlando, FL. (Photo by Hailey Garrett/PGA of America)

There are also innovative communication tools present now that years ago were not available. Previously, trade shows from were the crucial linking pin in providing the main platform under the umbrella of an annual be-all end-all event. Companies today can engage wide swaths of consumers in a range of ways via Websites and social media intersections that more efficiently broadcast what they are doing and how the general golf population can engage with them.
Interestingly, the bottom-line of the OEMs is strong as the pandemic prompted significant growth in the buying of equipment as golf rounds surged at all different types of facilities. The only downside has been the delays in fulfilling order made because of correcting supply side issues.
If there was one major advantage at this year’s Show smaller size companies gained more attention given the absences of higher ups in the golf food chain. Attendees took time ordinarily devoted to the primary participants and searched out exhibitors filling out certain niches. That game plan worked for this year. However, attendees do want to see the up-close star companies front and center. If they are not there — then the logical question becomes inevitable – why am I here?
Memories of past Shows featured a completely booked Convention Center. That has not happened in years. 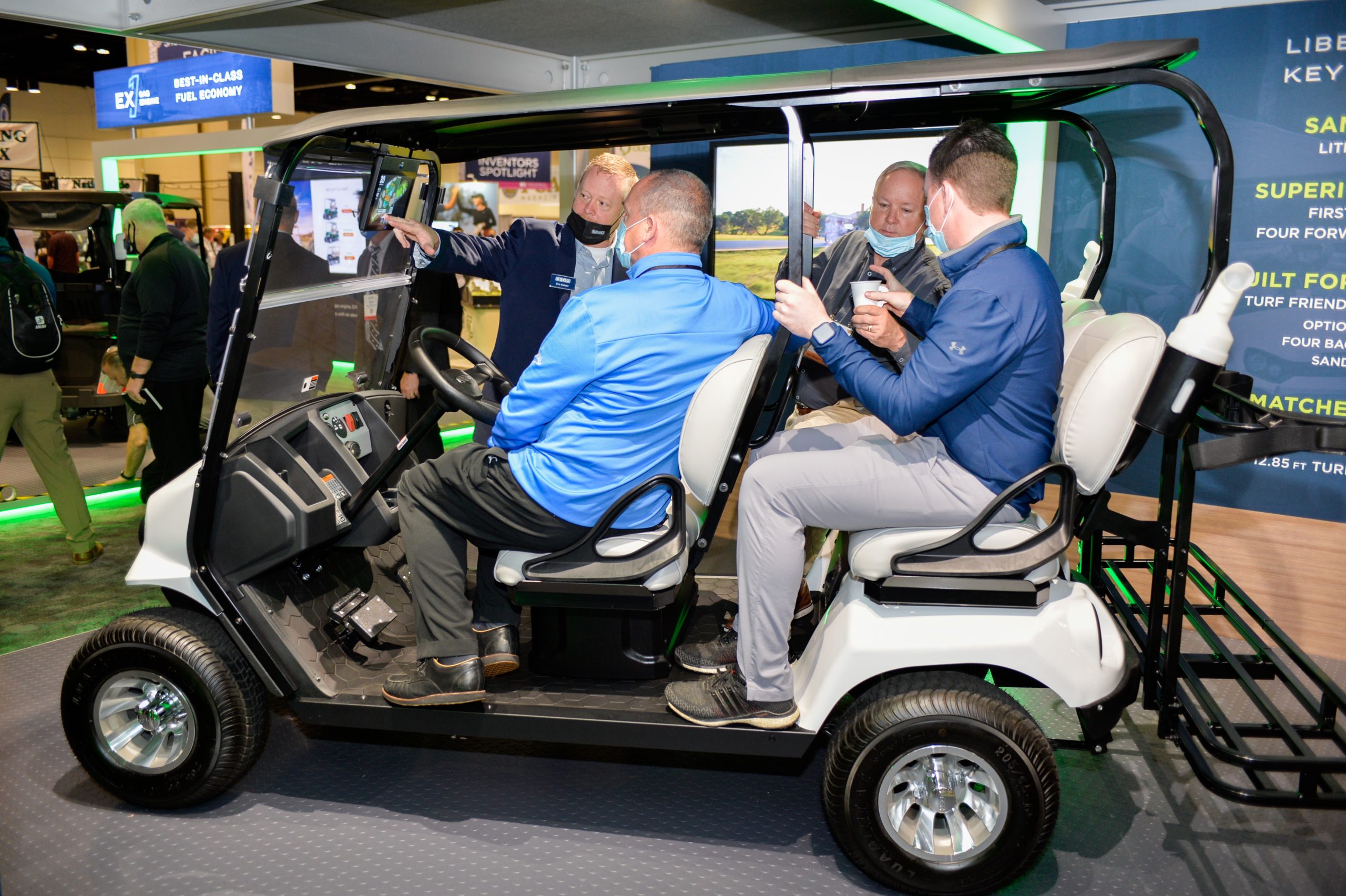 EZGO Booth during the 2022 PGA Show at the Orange County Convention Center on January 26, 2022 in Orlando, Florida. (Photo by Montana Pritchard/PGA of America)

Ultimately, the central question is whether the annual PGA Show has continued relevance? The ’22 event was dogged by top tier companies bowing out in tandem with abysmal weather that descended on Orlando during the duration of the event.
But far deeper issues crystalized with this year’s event and the need to significantly bolster the ’23 event will be front and center for the event’s organizers Reed Exhibitions in concert with the senior leadership at the PGA of America.
Trade shows of all types operate in a far different lane than years ago. Is there a true value beyond the schmoozing dimension? The PGA Show has smartly created additional bandwidth to stay front and center and it’s fair to say the ’23 event will likely not be as impacted by Covid and with any blessing Mother Nature will be more in alignment with Orlando weather conditions being more cooperative. 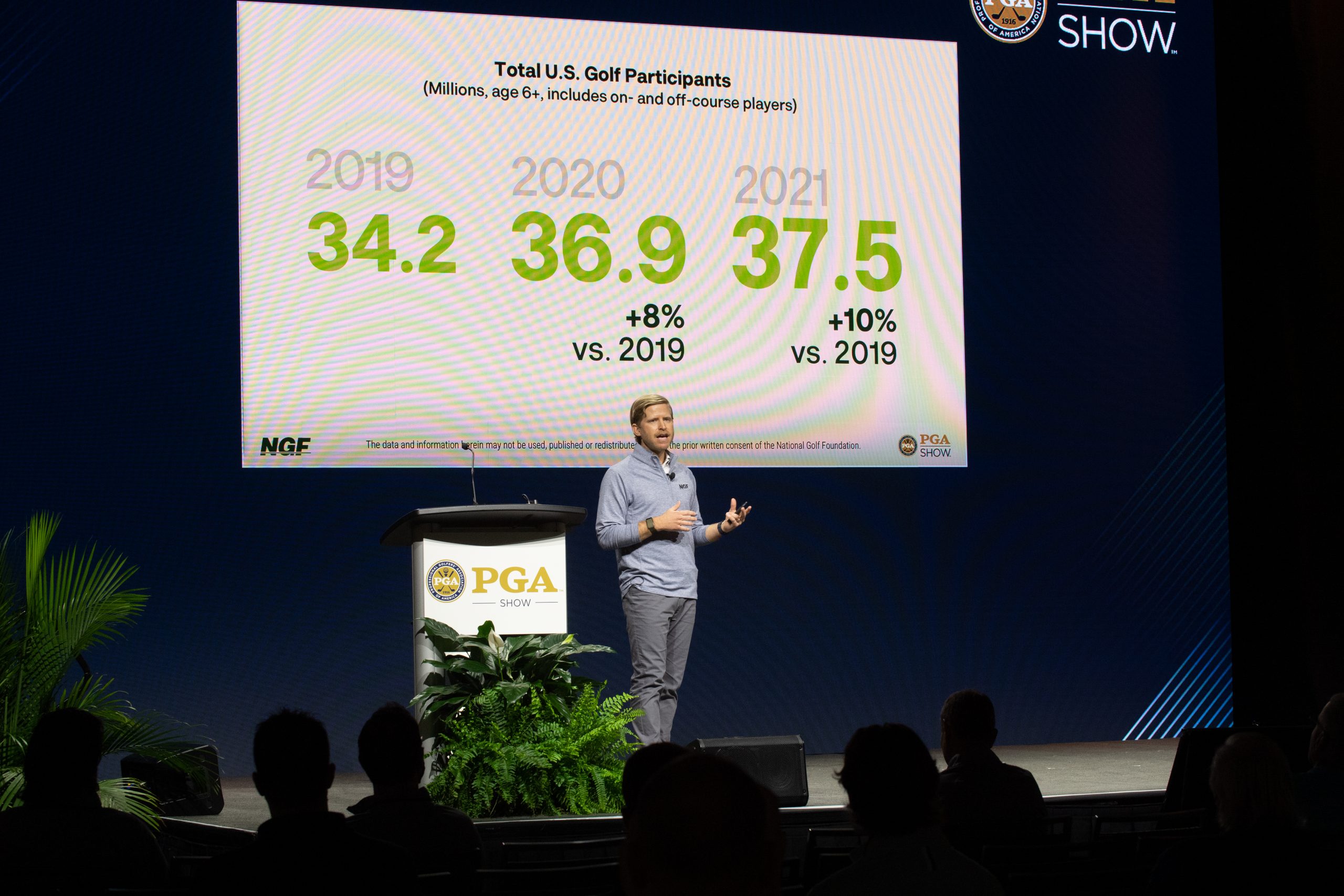 David Lorentz presents “What’s Happening In Golf?” during the 2022 PGA Show at the Orange County Convention Center on January 26, 2022 in Orlando, FL. (Photo by Montana Pritchard/PGA of America)

The need for a truly stellar ’23 Show is now more pivotal than ever. Can the storyline revert back to where the event has some positive wind behind its back? It’s surely possible.
Yet, the Show is closer to the precipice than ever before. That’s a perilous position to be in and requires an upfront assessment in acknowledging that staying the course, no pun intended, leads only to a permanent dead end.

There’s time to act but make no mistake the clock is indeed ticking.