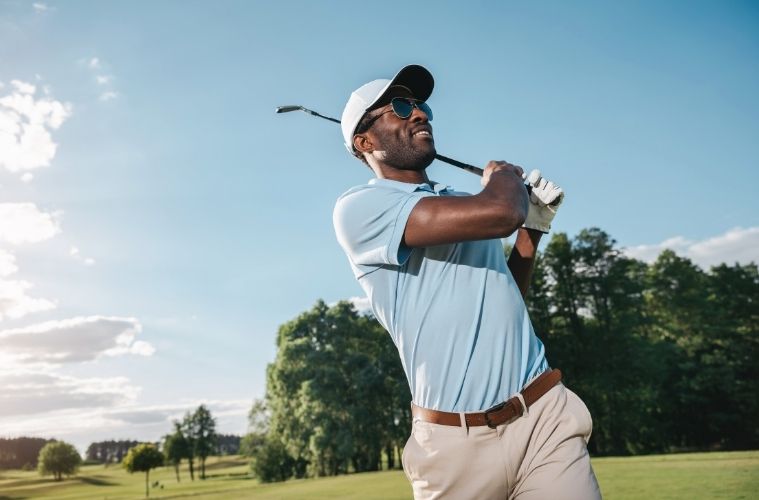 How To Look Amazing on the Golf Course

These are strange days for golfers, who have long obeyed the strictest dress code in sports. Tyrrell Hatton dared to wear a hoodie for the BMW PGA Championship and wasn’t struck by lightning—in fact, he won the whole thing. Mock-neck shirts are popping up on more fairways, and John Daly wears bright purple paisley without shame. Yet just last month, Australia’s Ewan Porter was kicked off a course for wearing black socks. And when he tweeted about it? They banned him for life.

What does this mean for a weekend golfer like you? Obviously, you should learn how to look amazing on the golf course. Right now no one knows what to wear, so take advantage of the confusion to add some style to your ensemble. Those tired khaki pants just might be what’s holding back your progress. The times they are a-changin’, and you don’t want to be the only one left in argyle knee socks.

You can spend more than $1,000 on a single golf glove today and not get so much as a pattern in return. Compression technology is cool, but so is a glove tricked out to look like the Avengers’ Infinity Gauntlet. Women are more willing to experiment with details like flamingo prints, glove manicures, and Swarovski crystals, but men can do it, too. Brands like Asher are having fun with intensely bright colors and skeleton-inspired “death grips.” Even something in camouflage leather sends a message that this isn’t just a round; it’s a war.

Golf has a long tradition of garishly loud separates that are still considered more acceptable than black socks. It’s the right spirit, but the wrong execution. Be bold, just in small doses that don’t offend the senses. A belt is just right for a dose of flair that’s not too obnoxious for a country club. Trade in the expected—a plaid, pastel, or needlepoint belt—for something that makes a statement, like a neon color or animal skin texture. As long as you’re required to keep your shirt tucked in, seize the chance for a little rebellion.

The only thing we really know about golf hats is that they shouldn’t look like they came with free soup. Even if you don’t know how to look amazing on the golf course, you’re not fooling anyone by calling that sweat-stained cap your “lucky” hat. Anything new would be an improvement, but style does not mean wearing a hat to announce your political opinions or favorite pun. Your snapback hat should never have a message, unless it’s “Dri-FIT stretch.” You can ease into something more fashion-forward with one of Puma’s flat-bill caps. And if you’re not afraid of a few stares, try exploring the world of bucket hats. Just remember that you’re not Bill Murray, and to steer clear of more conservative courses.