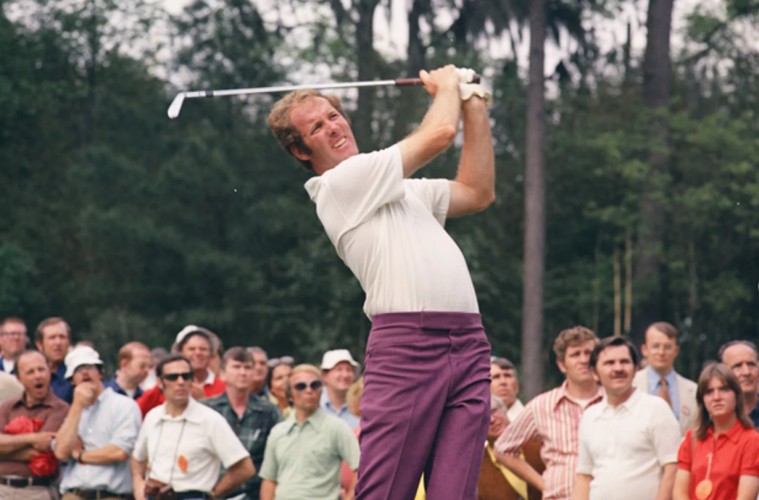 For some, the upside means fulfillment. An earlier promise of greatness others saw in its embryonic form. Conversely, the collective nature of those two words can weigh more heavy around the neck than any physical anchor.

A few weeks back, Tiger Woods was announced as one of the new inductees in golf’s Hall of Fame class for 2021. His selection was a clear and obvious choice. Nine others were announced as finalists for consideration and two others were just announced over a week ago with former PGA TOUR Commissioner Tim Finchem and Marion Hollins, one of the most important golfing women in the first half of the 20th century, being selected. The final selectee, chosen this week, is Susie Maxwell Berning — a three-time US Women’s Champion — which is well deserved.

Among the nominees not chosen again is a golfer who clearly had as much talent and potential as any other — Tom Weiskopf. The Ohioan had the dubious distinction in being the first affixed with the tagline “the next Nicklaus.” When the lanky 6’3″ inch golfer followed a fellow alumnus named Jack Nicklaus from Ohio State, Weiskopf had demonstrated clear actions — winning the prestigious 1963 Western Amateur similarly as Jack had done two years earlier.

Upon reaching the PGA TOUR Weiskopf displayed a swing and style of golf much envied. His long flowing swing produced powerful tee shots blended with a superb touch and control for a tall player. Those watching were amazed at his profound ability. It seemed as if nothing was beyond his reach. Between 1968 and 1982 Weiskopf won 16 times on the PGA TOUR including one major championship — the ’73 Open Championship at Royal Troon tying the four-round record for the event held by Arnold Palmer. The ’73 season would have Weiskopf finish the year in the number two position in the unofficial world rankings compiled by Mark McCormack. 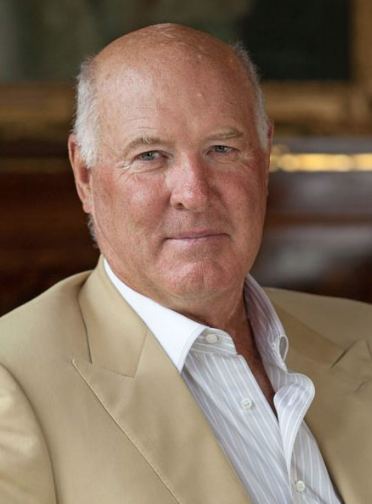 Jack Nicklaus himself said, “Tom Weiskopf had as much talent as any player I’ve ever seen play the tour.”  And therein lies the dilemma Weiskopf faced. Those two words — talent and potential. An endless battle of expectations. The Nicklaus career went beyond what any other golfer had ever seen prior to the emergence of Woods years later. The bar set by the Golden Bear became both the inspiration and expectation Weiskopf endured throughout his career.

No venue demonstrated more heartache for Weiskopf than Augusta National Golf Club — home to golf’s Masters.. Tom earned his first runner-up position at the 1969 event but what happened that year forewarned a situation that would replicate itself in future years. After securing a tie for the lead with eventual winner George Archer at the 15th hole — Weiskopf bogied the 71st hole eventually settling for a three-way tie one shot back. Runner-up positions would happen again in 1972 and 1974.

However, the most noted came in 1975. Weiskopf came into the final round as the leader — in hot pursuit Nicklaus and the equally talented Johnny Miller. Each man refusing to back off with the final round ablaze with each golfer pushing the other two. Tom played well enough to win – just not good enough. Nicklaus garnered his then record tying fourth green jacket at that time holding off both Weiskopf and Miller with each missed birdie opportunities at the final hole. Weiskopf’s miss was the more painful — coming from ten feet away leaving him to ponder what might have been. Many opined, at that time, Tom’s green jacket was merely delayed and happen soon enough.

Ignominiously, Tom earned a different place in Masters history — scoring a record 13 on the short par-3 12th during the first round in the 1980 event — plunging no less than five balls into Rae’s Creek. Interestingly, it was the first time Weiskopf had hit a golf ball from the tee into the fronting creek. His days as a main threat at Augusta were now forever centered in the past.

Weiskopf was also a prime contender at the US Open — between 1972 and 1980 — finishing in the top ten six times including a tie for 2nd in 1976 as winner Jerry Pate played a superb 5-iron approach at the final hole to cement victory. Weiskopf would display vintage form in opening the 1980 US Open at Baltusrol with a record tying 63 — ultimately finishing  37th. After becoming eligible for the Champions Tour — he captured the US Senior Open at Congressional in 1995 — besting his long time rival Nicklaus in the process by four strokes. Tom would also add two Canadian Open titles — when the event was seen as just below the four major championships. One of those triumphs coming in 1975 besting Nicklaus in a playoff.

Weiskopf freely admits the pressures to perform at the highest of levels– especially in the shadows of Nicklaus — wore him down and that his involvement with alcohol clearly played a role with his overall play suffering. “I wanted to be like him (Nicklaus),” said Weiskopf. 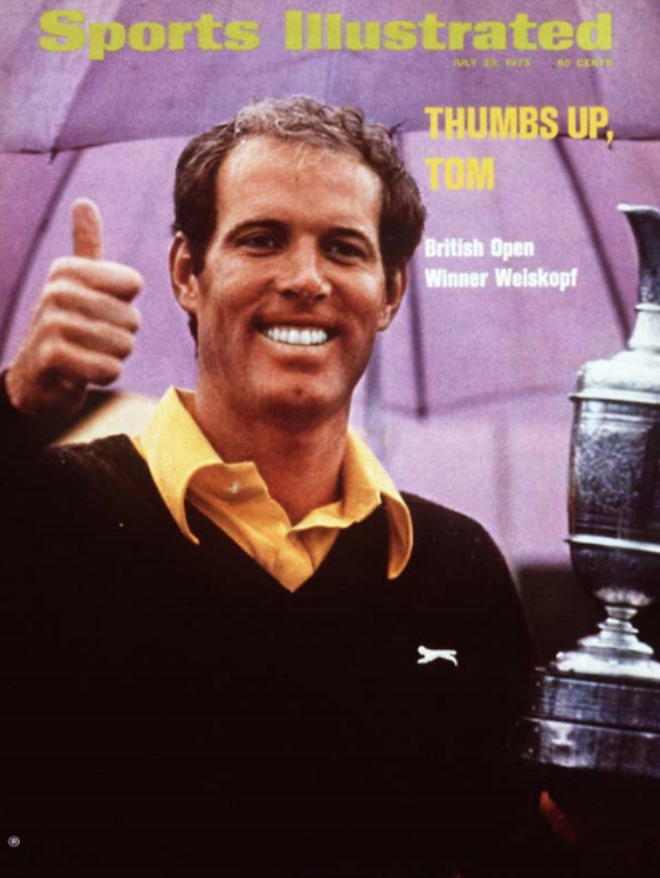 At various times the mood swings would overwhelm Weiskopf – exhibiting a roller coaster of emotions and often embarrassing public outbursts. No less than five times he summarily picked up his golf ball walking off the course. Years later, he would admit such actions were unacceptable.

Other actions also caused heads to shake in bewilderment. In 1966, at the Canadian Open, Weiskopf back-handed his ball up the 18th fairway. In 1996, Tom would bemoan to the press the actions of his amateur playing partner at the US Senior Open regarding the sort of marker being used. In 1977, having earned enough points to join his 3rd Ryder Cup team, Weiskopf opted out stating a previously booked hunting trip.

The pressures to perform against Nicklaus in seeking in his own mind “perfection” would derail lasting fulfillment. Alcoholism would add to his downfall — instead of Tom as the towering golfer he became known as Tom — the towering inferno. But, more importantly, the wherewithal to end drinking on January 2, 2000 — was a significant milestone — once and for all — putting self-imposed demons in his rear view mirror.

As his playing career faded into the shadows Weiskopf produced a far more lasting impact as a golf course designer. That career started in 1983 when forming a partnership with the talented Jay Morrish. The tandem created a range of thinking man layouts and included an array of challenges blending execution both physically and mentally. Among the successes with Morrish included Troon North and Forrest Highlands in Arizona, Double Eagle in Ohio, Loch Lomond in Scotland, to name just a few. In future years, Weiskopf ventured out on his own designing courses where playability and fun were primary emphasis areas.

Tom Weiskopf’s career as a tour professional did not attain the lofty heights many believed would come. And no one knows that more than himself. The prodigious talent was there but often times failing to materialize when Tom would get deep into final rounds with victory lurking then fail to close out wins. Either because of his own shortcomings on the execution side or from the wherewithal of players making critical shots when circumstances warranted. Think back to the mind boggling 40-foot putt Nicklaus drained at the 16th hole during the final round of the 1975 Masters. Weiskopf standing back at the tee and seeing the situation firsthand. 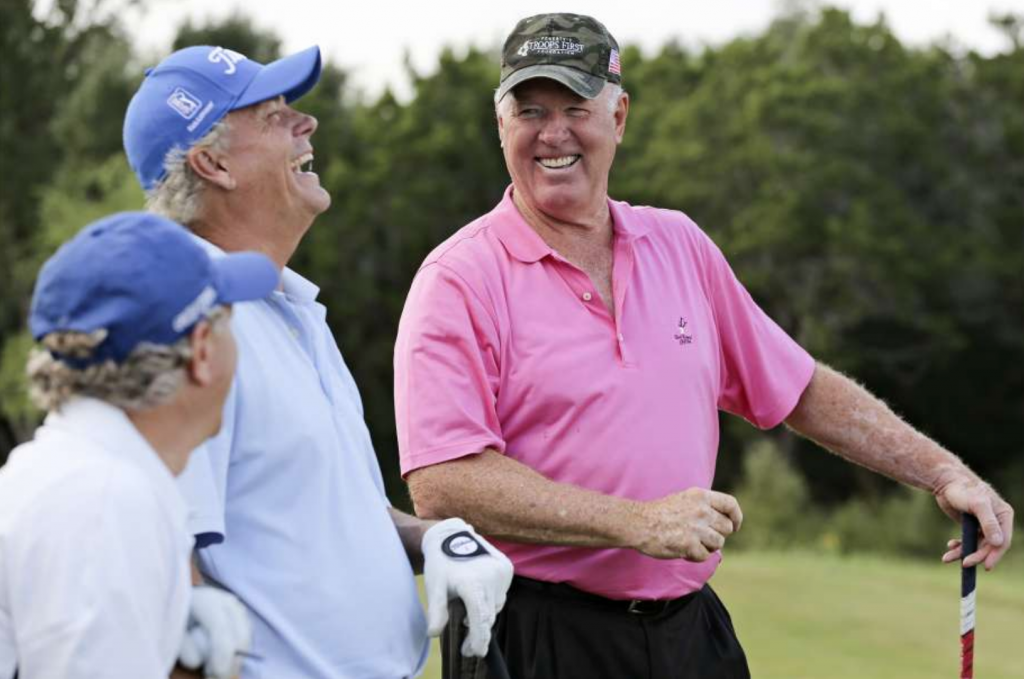 Nonetheless, Tom clearly played to a level deserving of such recognition. Lanny Wadkins, a Hall of Fame member since 2009, said of Weiskopf — “I was so impressed with the way he played — he made golf look easy.” Others gained admittance with respective records no better than Weiskopf’s. It’s likely earlier bouts of temper and moody displays may have left an indelible mark with certain selectors. But the flip side bears equal, if not greater acknowledgement. When Weiskopf was at his peak his level of play was nothing short of sensational.

The 77-year-old has found internal peace living in Montana now. Tom Weiskopf was a puzzling enigma — one leaving fans always wondering what was holding him back. In retrospect it was likely Weiskopf himself. Before his father passed away in the spring of 1973 he told Tom to be more patient — permit the talent present to simply emerge. That long sought calmness has come now. Weiskopf is fully aware the clock cannot be turned back. But his achievements — both as a player and later as a course designer — were clearly present and worthy of enshrinement.

Why is Weiskopf still waiting?