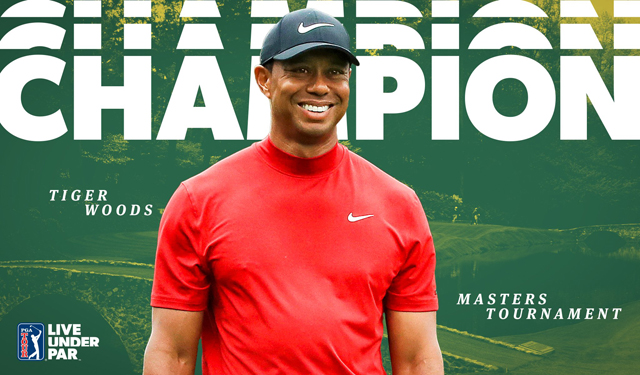 By now everyone knows Tiger Woods regained his major-winning form with a come from behind win of the 83rd Master but here are a couple of interesting notes regarding his TaylorMade Golf equipment.

Since the Farmers Insurance Open in January Woods has had the P•7TW irons in his bag (see below) which have just become available for sale. He has stayed with a 2017 M3 model fairway woods which at 19° could legitimately be labeled a 5-wood, a term though that is being used less and less. His Scotty Cameron putter, the Newport 2 GSS has been a favorite shape for most of his career—GSS stands for the ultra-expensive German Stainless Steel used to make the head.

This also is the fourth win this season for Bridgestone’s Tour BX family. In addition to Woods playing the Tour BXS Matt Kuchar won twice and Bryson DeChambeau once with The Tour BX.

TMaG P•7TW Irons
It was no secret that when Tiger Woods signed a club endorsement contract with TaylorMade Golf, he had been playing their woods but had stuck with his trusty Nike irons until last summer when he put the TMaG TW Phase 1 irons in his bag. For 2019 the process for Woods and TMaG to create a suitable forged iron matching his demanding requirement was completed and the result is the P•7TW model. 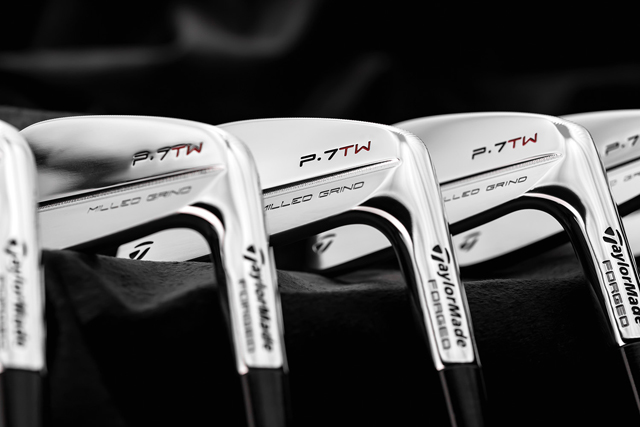 Like Woods these irons are very special, and he had lots say in their final design. Compared with the P730 irons, the favorites of several Tour players, P•7TWs are slightly longer from heel to toe and have a somewhat thinner topline. Woods likes a “hard” feel at impact which was accomplished by putting a tungsten weight behind the impact area of the head rather than in the toe as most other players irons.

Using the same machining technique as is done for their Hi-Toe and Milled Grind wedges the sole of each P•7TW is milled with parallel grooves to ensure consistent turf contact throughout the range of lofts.

Available for preorder now and in shops May 1, the P•7TW set of 3-iron through 47°-pitching wedge sells for $1999.99 with True Temper Dynamic Gold S400 Tour Issue shafts and Golf Pride’s Tour Velvet Cord grips. The P•7TW will also be available through TaylorMade’s custom program, allowing for additional custom shaft and grip options.

“The irons Ben Hogan would make with today’s technology”
The headline says it all. Ben Hogan Golf is enthusiastic about the new forged PTx Pro irons made for top players and are an updating of the original PTx model of 2016. Citing “multi-million-dollar sales growth in 2018” from their direct-to-consumer business model, Hogan does not categorize the PTx Pro as either as players irons nor as a players-distance iron but for those who “seek a certain performance.” 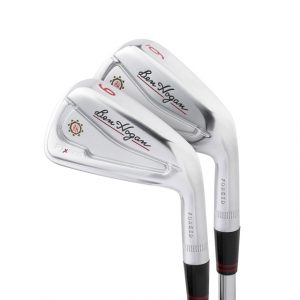 “PTx PRO irons set a new standard for performance. Each iron head was designed and constructed independently using three separate pieces, different materials, and a multi-step co-forging process. It’s complicated and expensive, but it’s the only way we could engineer the performance we wanted from this special set of irons. We think PTx PRO are the irons Mr. Hogan would have made himself had he had access to today’s technology” said Scott White, President and CEO.

The long and mid-irons (#4 – #7) are hollow, forged from a 1025 Carbon Steel frame with a MS300 steel face and tungsten weights near the toe for a straighter ball flight, higher initial launch angles and more spin. The short irons (#8 – PW) use lighter titanium face inserts to distribute weight in the heads to help generate a penetrating ball flight.

A set of seven PTx PRO irons, 4-iron through 46°-pitching wedge, are $770 from BenHoganGolf.com.

Player Puts Money into OnCore:
GGW doesn’t usually give much coverage to endorsement deals by players with manufacturers but this one is worth a few lines. Gary Player, yes that Gary Player, has signed a deal with OnCore Golf to buy a stake in the company joining Charles Schwab and Al Geiberger as investors. The member of the World Golf Hall of Fame and winner of nine majors played the OnCore ELIXR ball in the Masters Par-3 Tournament and used it when hitting the ceremonial opening drive on Thursday. The “Black Knight” also signed a full-bag deal with PXG making last week a very busy one for the 83-year old South African.

Gear Counts:
Odyssey captured the top slot in the putter count at Augusta and Titleist Pro V1/Pro V1x the number one ball brand with 55 in the 87-man field using them. Callaway Chrome Soft/Chrome Soft X was a distant second with 11.