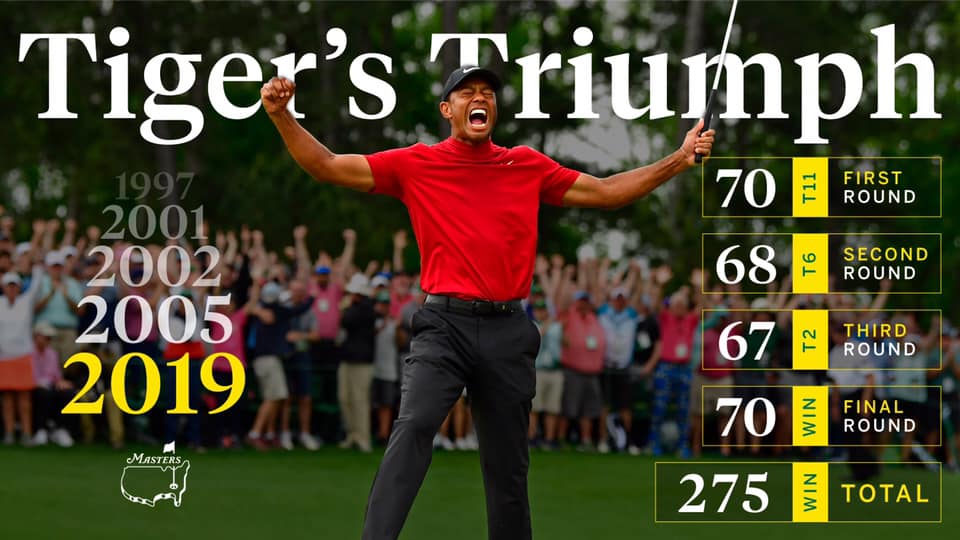 In order for Tiger Woods to attend the 2017 Champions Dinner at Augusta National Golf Club, he needed an injection to desensitize nerve damage for his ailing back. The world’s most renown golfer admitted to others attending the event — one where only former winners can attend — his future in competitive golf looked more or less at its end given the unremitting pain.

Fast forward to 2019 and Woods accomplished what few ever thought possible — returning to the winner’s circle of a major championship at The Masters by claiming his 5th green jacket and 15th overall major championship respectively. The one-stroke victory over a trio of golfers including Brooks Koepka, Dustin Johnson and Xander Schauffele was utterly remarkable because not until the 15th hole of the final round did Woods secure the lead which he never relinquished.

Woods earned his first green jacket in 1997 — becoming the event’s youngest champion at 21 — and doing so by setting a tournament record score of 270 and a winning margin of 12 strokes. His most recent win — now 22 years later — clearly belongs among his most noted.

This 2019 victory was different from the previous 14 majors he has won — securing the victory with a first time come from behind effort as Woods commenced the last round two shots behind 3rd round leader Francesco Molinari.

The last time Woods had finished in the top spot in a major event came at the ’08 US Open in winning epically first with a tying 72nd hole putt and then in a sensational playoff victory over Rocco Mediate at Torrey Pines. Al the more remarkable given that Woods played the round via a broken leg with a torn ACL. During the on again off again period in dealing with various injuries and surgeries Woods would miss teeing it up at all of the major events in 2016 and 2017. His last top ten, prior to finishing 6th at last year’s Open — came in 2013 at Muirfield when he finished in a tie for 6th in the game’s oldest major event.

The Masters win brings Woods full circle back to the pantheon from which he long reined before injuries, marital infidelities and issues with drug usage caused many to wonder if the best days of Tiger were clearly in the rear view mirror. Even with the cumulative impact of the surgeries Woods returned to full time competitive play in 2018 showing clear signs he was capable in being much more than just a shadow of his former self.

Woods was in contention at last year’s Open at Carnoustie ironically coming out short to eventual winner Molinari who, along with Tony Finau, were paired with Tiger during the final round. Woods also displayed clear signs of his vintage self in pushing eventual winner Brooks Koepka right to the end before finishing in the runner-up slot at the 2018 PGA Championship. Tiger would close out the 2018 season with his first PGA Tour victory since 2013 in winning The Tour Championship — rounding out his win total to 80.

The skills needed for success at major championship play goes far beyond being simply possessing talent and having won a range of other events. The four majors define golf history. Solidifying one’s ultimate placement against all others who have ever played the game. Woods also eclipsed the 13-year period between Masters wins set by Gary Player (1961-1974) with his last triumph at Augusta National coming in ’05.

Unlike his closest rivals — Woods did not crack at key periods during the final round. Molinari showed Houdini-like escapes in one-putting 7 of the first 10 holes. But, the Italian golfer found water at the always dangerous par-3 12th and the double-bogey opened the doors to a range of challengers. The same fate at the 12th befell Koepka and Finau who also drowned their approaches. Molinari’s tenuous position at the top of the leaderboard finally cracked when his 3rd shot to the par-5 15th found a frontal water hazard and the resulting double-bogey ultimately ended his hopes in becoming the first Italian to don the green jacket. 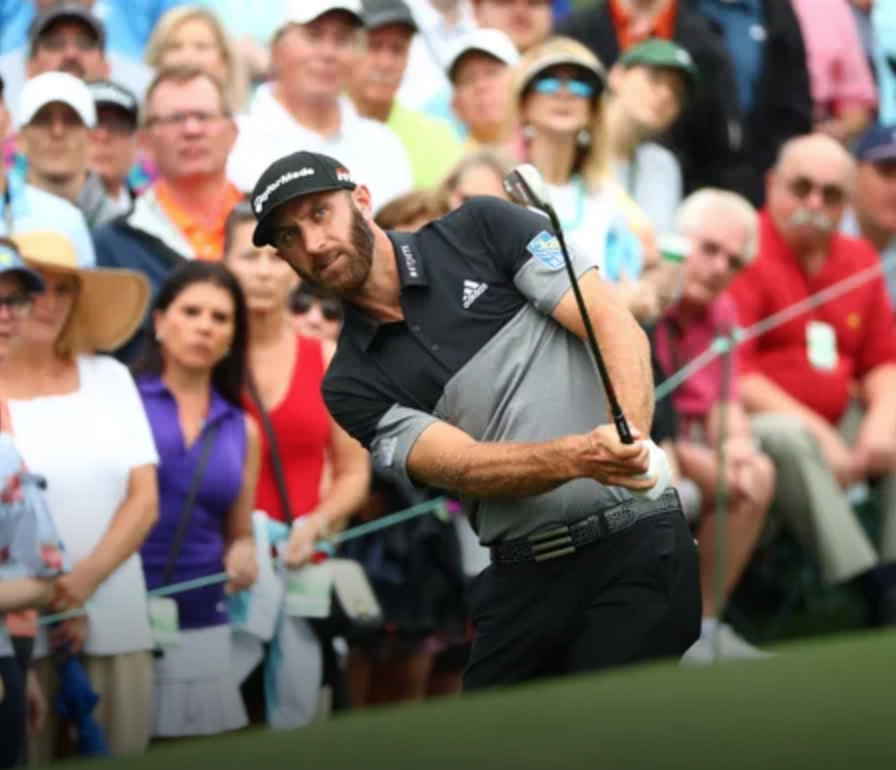 Koepka, Johnson and Schauffele each attempted late round heroics but when Johnson and Koepka both failed to birdie the 18th hole it allowed Woods to play the final hole cautiously finishing with a bogey and a one-shot winning margin.

The win for the 43-year-old Woods makes him the oldest winner of the famed green jacket since Jack Nicklaus claimed a record 6th title at age 46 in 1986. He also enters the top ten in the world rankings for the first time since 2013 with a 6th position.

Amazingly, Woods win featured four consecutive bogeys made each day at the par-4 5th hole where a new tee was added extending the hole to 495 yards. Woods has never won a major championship in which he never scored a par or better at some point on a hole during four rounds of play.

Tiger’s win clearly resurrects the storyline of Woods being able to go after the 18 career majors won by Nicklaus. This year’s major calendar features two locations where he has won previously — Bethpage and Pebble Beach for the PGA Championship and US Open respectively. The Woods of today is a man who understands fully the amount of effort it has taken to scale the highest of golf peaks after having suffered serious setbacks in a range of different ways.

The sheer joy he displayed when the final putt was holed let loose a loud chant from the assembled masses with roars of “Tiger, Tiger, Tiger.” For a number of years Woods was the premier sportsman globally. His return to the pinnacle of the game with his win at The Masters puts to rest all the “Woods is finished” storylines.

The loving embrace Woods shared with his two young children and mother upon leaving the final green showed equally a father and son connection to the people that matter most to him.

The most pressing question in golf is a simple one now. How soon can the PGA Championship happen in May? If the event at Long Island’s storied Black Course is anything close to what happened at Augusta National then both the game of golf and the overall sports world will be riveted to see what transpires.

For now — the simple and unequivocal reality is clear — Tiger is indeed back on the prowl.