Headquartered in the suburbs of Chicago, Tour Edge was founded in 1986 by David Glod, a former golf pro at Village Links Golf Club in Glen Ellyn, Illinois. As a young entrepreneur, Glod truly believed there was an opportunity in the golfing industry to provide a high-quality product at an affordable price.

Glod’s goal was to change the consumer’s perception of value and quality in golf clubs. He designed his first club in 1987 and never looked back. Tour Edge is an American owned and operated company for more than 33 years.

Club validation in 2019 started with Tom Lehman opening the season with a win in Hawaii and Scott McCarron adding a runner-up finish after the first 6 events of 2019, Exotics clubs have now finished 1st or 2nd in 18 of last 30 PGA TOUR Champions events. There have now been over 400 Exotics clubs in play over the past year by over 60 different professionals — only a total of 8 of them on staff with Tour Edge.

One of the biggest developments for Tour Edge has been manufacturing a driver embraced by the tour pros. Exotics staffer Duffy Waldorf recently put the Exotics EXS Driver into play, as have several other players. The Exotics EXS Driver is a $299 driver featuring all of the technology and innovation as much higher priced drivers, leading it to win MyGolfSpy’s 2019 Best Value Driver in their annual Most Wanted driver testing. 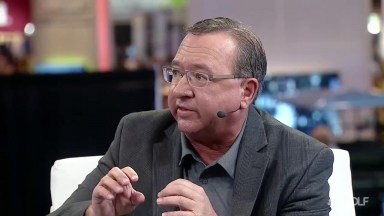 Tour Edge Golf is in its 33rd year as a golf club manufacturer in 2019. Known as company that spends money on materials and not necessarily huge marketing dollars when compared to the behemoths of the industry.

“But as time has gone on, we’ve shifted our focus to educating the golfing public about how we really are providing “Golf’s Most Solid Investment,” said Glod.

“Everything we do, even our Titanium faced fairway woods and hybrids with advanced materials and manufacturing techniques and genuine tour shafts, has that mantra at its core.”

What kind of momentum does Tour Edge have going into the 2019 golf season?

We have the most momentum we have ever had as a company. It’s been about five (5) years in the making, but all the plans we have made to take Tour Edge to the next level, to get efficient in our space have come to fruition and it has led to three straight years of unprecedented growth. 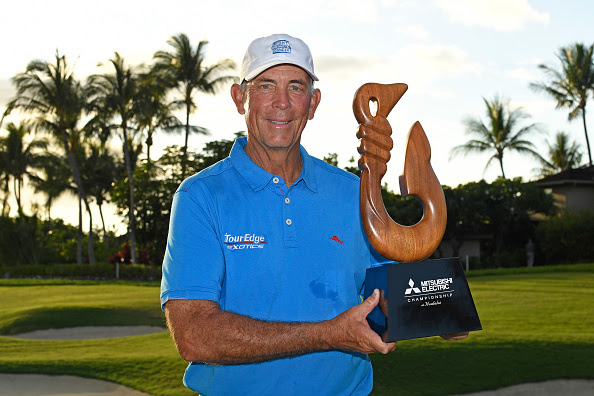 Tour Edge has gained considerable mileage with the usage of clubs played on The Champions Tour — most notably Tom Lehman winning this past January in Hawaii. How has tour success translated into consumer awareness and purchases?

Ever since we launched Exotic over a decade ago, we have had tour validation. We had clubs in play at the Masters again this year and we figured out that CBX 119 will give Tour Edge a decade of Exotics in play at The Masters! We had 10 wins on the Big Tour over a 10 year time period before we broke out for 9 wins on Champions and Web.com tours the past two seasons, but it just was only going to go so far when you can’t use a player’s name.

Being able to use the likeness of the great Tom Lehman and top players like Scott McCarron,  Tim Petrovic and Duffy Waldorf and the fact that they are all featuring Tour Edge Exotics logos makes a huge difference. Plus, these guys are starting to play other Tour Edge clubs, like drivers, iron-woods and irons. More than just the fairways and hybrids we were known for in the past.

The release this year of the Exotics EXS driver has been well received. How has the company been able to combine technological advances in concert with a price point far below larger sized rival companies?

We wanted to shake up the industry by offering all the tech in the $550 drivers in one that cost $299. Our research showed that millions of core golfers are deferring product purchases as a consequence of higher prices and this latent demand is costing the industry sales.

Exotics EXS services this latent demand by delivering a high-technology, great-performing solution at a price that allows savvy golfers access to the latest technology. We are on track to sell more Exotics drivers this year than we ever have before.

Who is the Tour Edge customer?

We are one of the very few manufacturers doing what we are doing by providing clubs for the entire spectrum of golfers.

With our third tier, we have our tour-winning line of Exotics for your serious and discerning golfers all the way up to the very best golfers in the world. 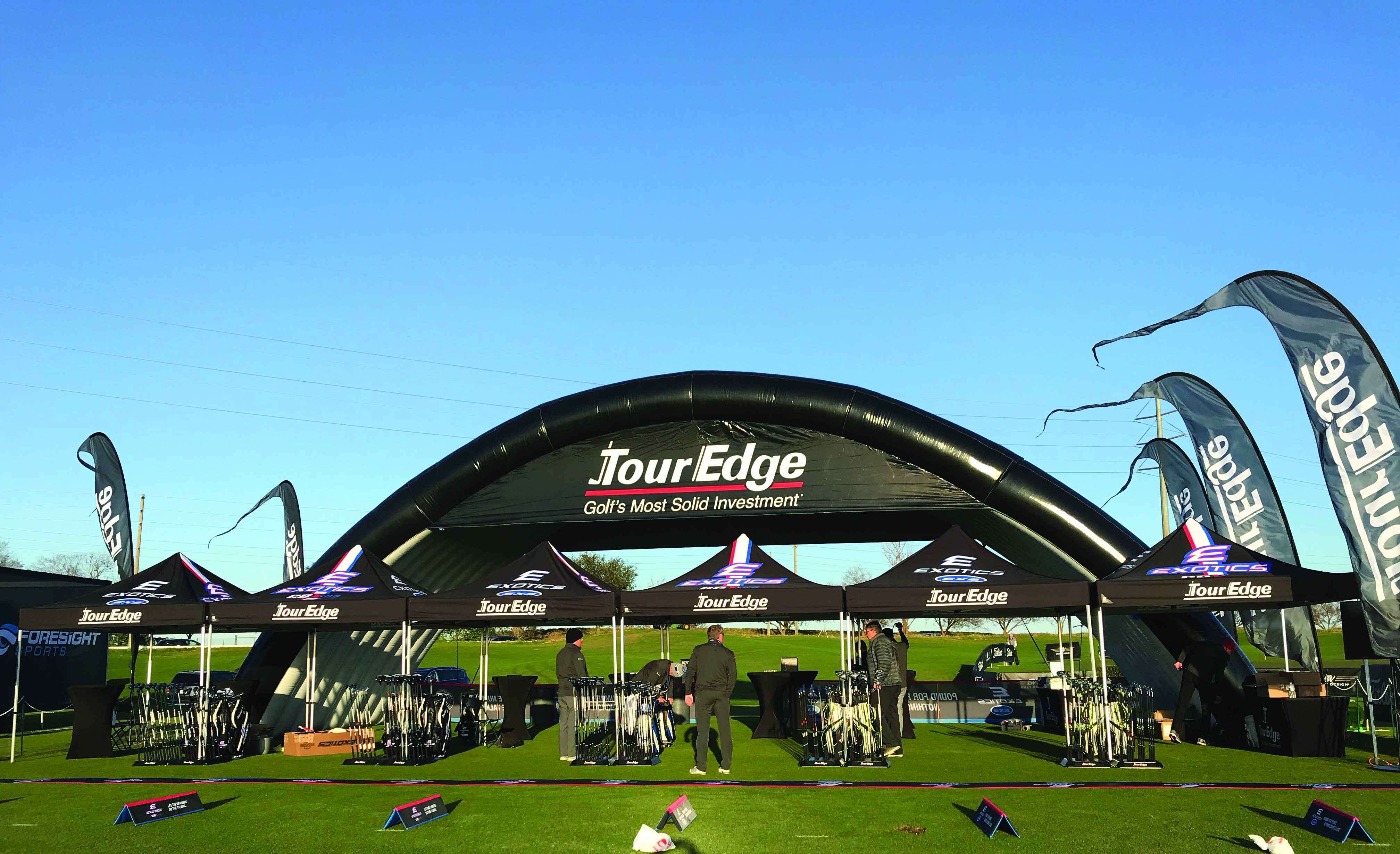 The Tour Edge booth at the 2019 PGA Show in Orlando.

Among your customers what’s the gender breakdown and what steps are you taking to expand awareness among Millennials and women?

I would say the gender breakdown for us is 65% men to 35% women, which is more even split than most golf companies have. Millennials have come to Tour Edge due to the latent demand for high-performance clubs with a lower purchase price as they are just getting into golf or they are looking for the most bang for your buck, which has become our wheelhouse. With more and more ways to look at your numbers and to get custom fit, we can prove ourselves to the younger golfers and they can save money knowing they are getting the best equipment for their game.

What role does customer feedback play in your future club production plans and is there a situation where that contribution was truly significant?

No one else stands behind their products with golfing consumer as we do. This is all done for the consumer and with consumer feedback. We are a United States brand who builds our clubs in the USA and we stand with the golfer and protect the golfer with a lifetime warranty and amazing prices for amazing performance based product to help grow the game of golf. 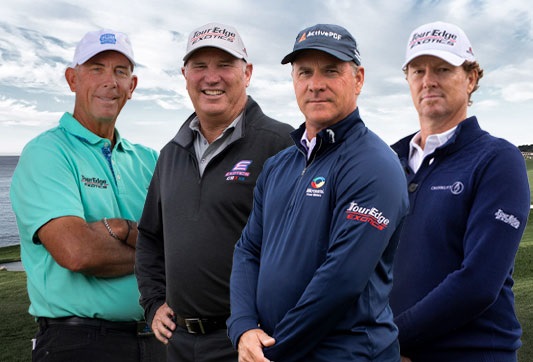 Given your overall lack of size when held against much larger rivals — what marketing efforts are you aggressively pursuing to build consumer awareness in 2019?

We are advertising heavily on Golf Channel these days and we even have our own show now that we sponsor, the PGA Tour Champions Learning Center presented by Tour Edge Exotics. There are 43 episodes that will air in 2019, with 15 of the episodes featuring Exotics staff players Tom Lehman, Scott McCarron, Duffy Waldorf or Tim Petrovic in the “What’s Your Edge?” golf tips and equipment segment.

We are further streamlining our Tour staff message through traditional golf media outlets like golf magazines, with a concentration on digital advertising and marketing initiatives with the world’s largest golf websites and forums. We are also heavily advertised on Sirius XM’s PGA Tour channel with Brian Katrek and John Maginnes and with Matt Adams’ Fairways of Life radio show. Those are the most listened to golf shows in the world. Plus we do a ton of stuff regionally and with our retail partners.

A number of equipment companies have sought to expand their offerings beyond what drove their success initially to a far wider array of offerings. In some cases that decision has not paid off and meant a major drag for those who have failed. What lessons has Tour Edge gained in attempting to widen its equipment profile and knowing how fast is too fast?

That’s funny, as we are actually scaling down to be honest. We have always had a pretty expansive in-line product line as I try to cover all the niches that aren’t being serviced or that had been abandoned.  Exotics EXS has helped us to open up the driver and iron market to Exotics, so really we do it all, just trying to be smarter and more efficient with the products we come out with as we move forward. 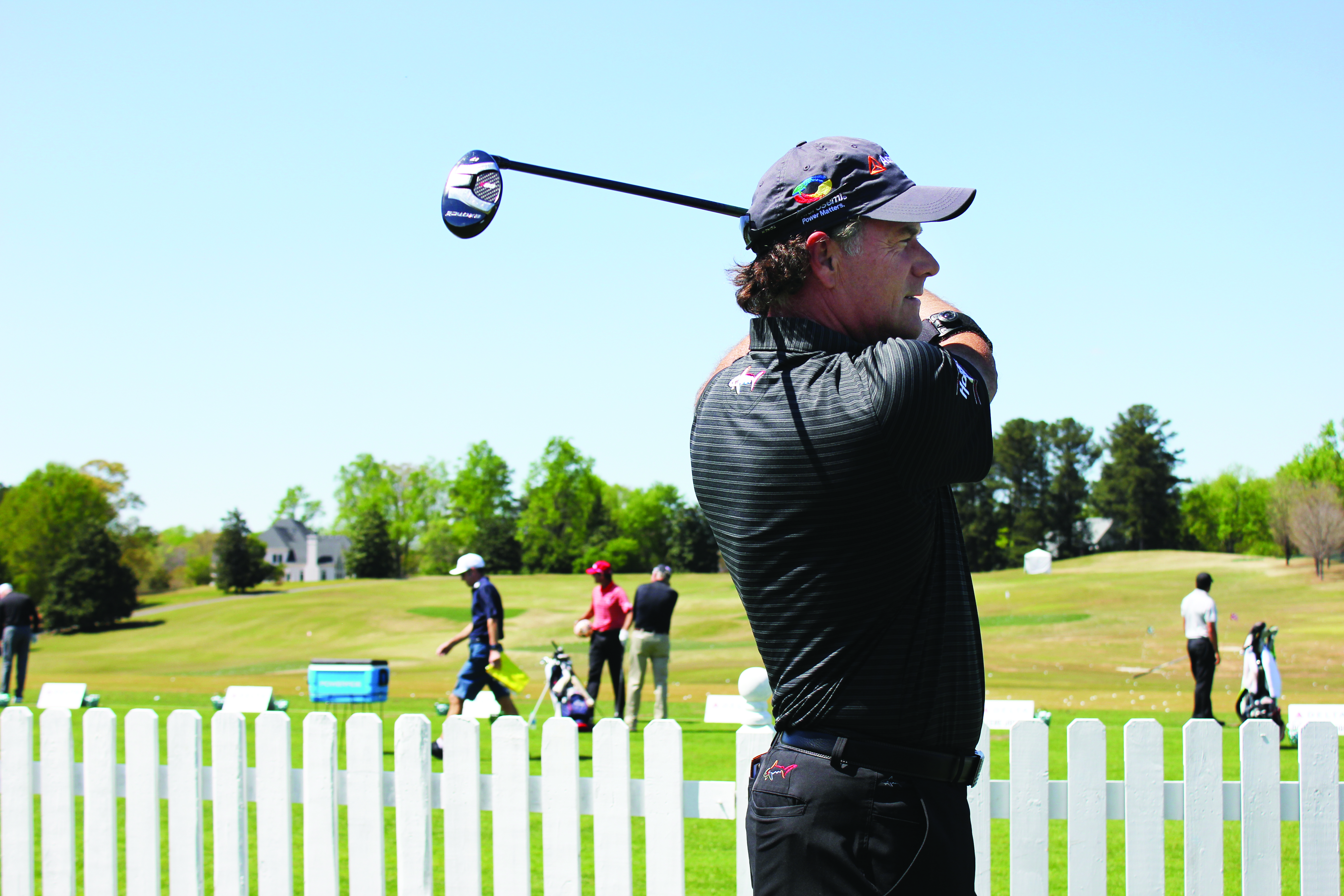 I would say it’s always the same for us and we are finally doing something about it with our marketing and that is global brand awareness. That’s the good fight we are fighting.

Complete the sentence — David Glod is —

Always thinking about what’s next.