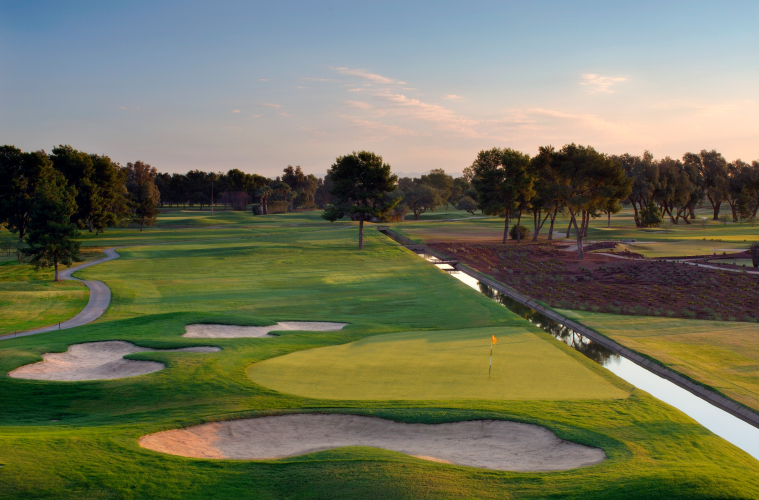 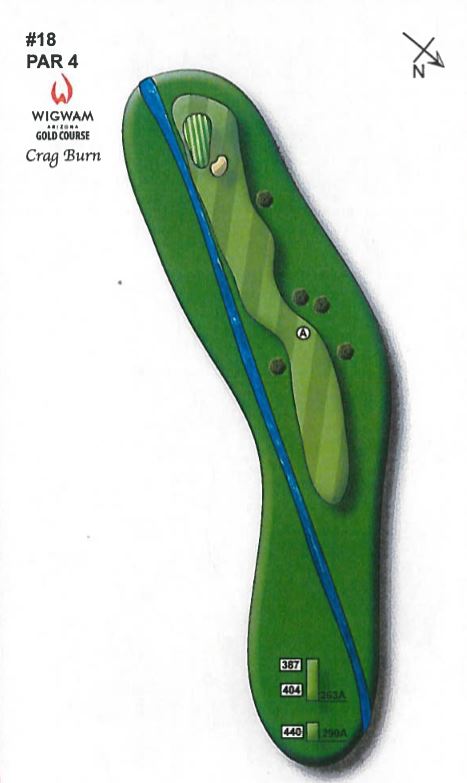 In recent years the focus of golf in the Arizona area has featured Scottsdale as ground zero. However, desert golf blossomed far earlier in other key locales. Just west of Phoenix in the community of Litchfield Park is the Wigwam Resort & Golf Club — celebrating its 90th anniversary this year before all the fanfare tied to what desert golf would later become — the Wigwam was on the ground floor — planting meaningful seeds germinating years later.

On Thanksgiving Day,1929, the Wigwam opened its doors. Goodyear Tire & Rubber Company had purchased 16,000 acres of land  for cotton farming because of the impact on how cotton could expand the life of its tires. Golf commenced initially with a 9-hole effort in 1930 — eventually expanded to 18-holes in 1935. The ascendancy in golf took off in a big time way in the 1960s when golf’s most prolific architect at that time, Robert Trent Jones Sr.,, was hired to create a second 18 and rebuild the original.

The newly opened 18-hole routing by Arthur “Jack” Snyder in 1961 was quickly under the knife to become two “new” courses — Gold and Blue respectively. Snyder was good friends with Jones, who was complimentary of the work Snyder had done — even keeping greens and hole alignments for 14 of the 18 holes re-developed to form the new Wigwam. Interestingly, those 14 holes remain — yet few know the exact origin.

Goodyear was envious of the success experienced by Firestone, one of its main business competitors, in creating a 36-hole facility in Akron, OH. Goodyear opted to hire the same man responsible for that effort and create a desert oasis with golf as its centerpiece. 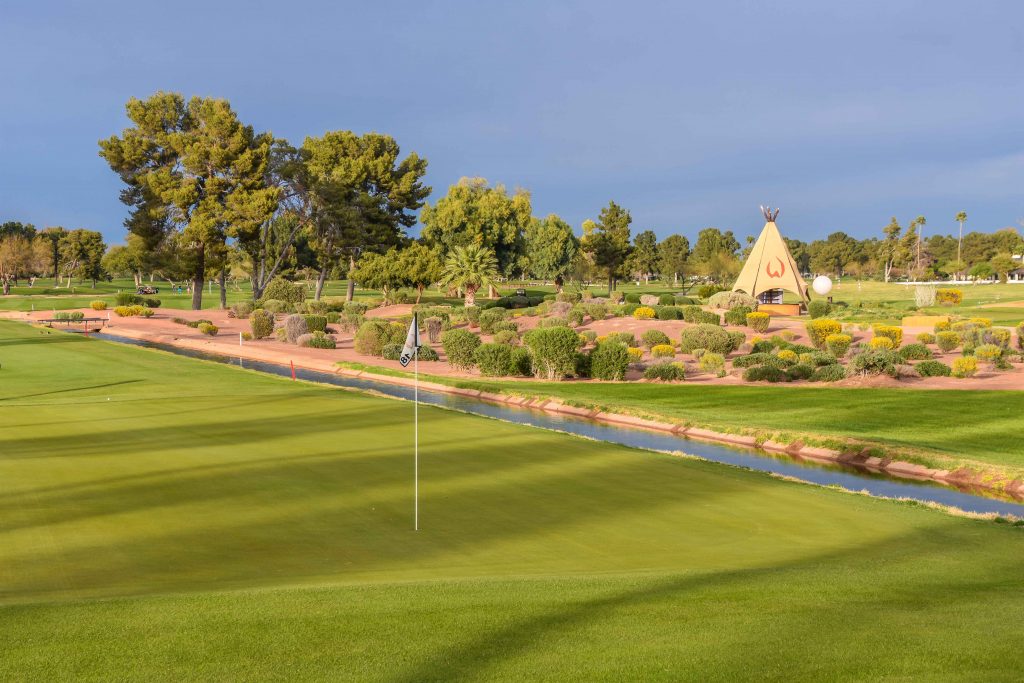 Like any facility the impact of age and overall usage necessitated upgrades of various sorts. In 2004, Phoenix-based architect Forrest Richardson was hired to assist the facility in reshaping the property for more expansive efforts including room for a full-length practice facility. Richardson’s involvement also required the re-direction of certain holes — including the renowned Gold Course and it’s much celebrated closing hole.

“The story of the 18th on the Gold Course begins when we needed to make room for a full-length range. The original finishing hole by Mr. Jones was a straight-a-way par-4 with good bunkering and trees to guard the left,” said Richardson. “That hole is basically now the 18th of the Blue Course — made possible by re-arranging the finishing holes of both courses. I knew the canal could become an interesting part of the routing, and Mr. Jones loved the canal as a hazard because it guards the green at the 8th. My solution was to shift the 18th not only as a heroic tee shot, but also as a strategic green right on the edge of the water.”

The concluding hole on the Gold took root from Jones’ philosophy, a design Richardson reinvigorated based on his study of Jones’ early work that eventually defined his career. 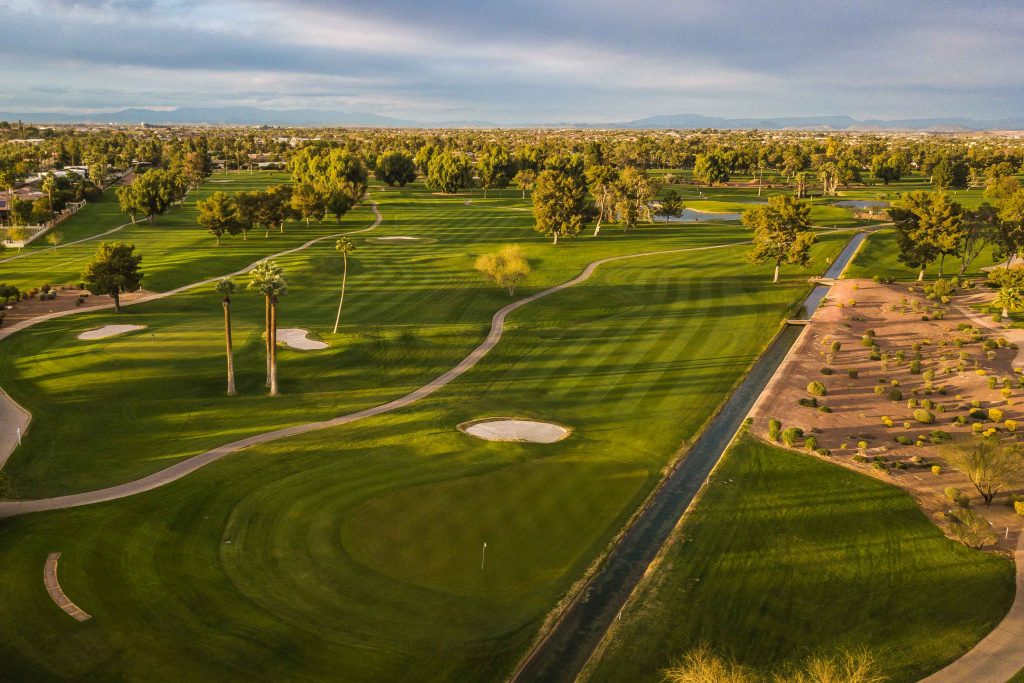 “It wasn’t without its controversy,” Richardson fondly remembered. “When I met with members after the opening I heard from some low handicap players complain they found it ‘difficult’ to make par with an approach that was often impossible to hold a shot to the green — so I reminded them of Mr. Jones’ famous line that every hole should be — a difficult par, but an easy bogey.”

The canal hugs the green like a pre-schooler clinging tightly to his mother’s apron on the first day of school. The slightest pulled shot veering left will either find the canal or result in a tremendously challenging pitch shot back over it to the green.

Work was completed by the summer 2005 on the Gold Course, which took on the moniker, “Arizona’s Monster,” referring to Jones’ original concept that from the back tees be the toughest for the better player. Today, the layout stretches just over 7,400 yards with a 74.5 course rating and 135 slope.

“When we go about renovating a course we ask where the club has been, where it is, and where it wants to be,” added Richardson. “For the Wigwam it was rather simple: the legacy of Robert Trent Jones, Sr. had all but been lost to time. Our role was to uncover the greatness and where it had been lost for good, to bring back the sense of style and challenge Mr. Jones embraced.”

Being able to create a superb hole on relatively flat land can be a monumental challenge because often times modern architects will inflict a range of insertions completely unnatural and standing apart rather blending into the character of the hole. A faithful effort has indeed been carried out. 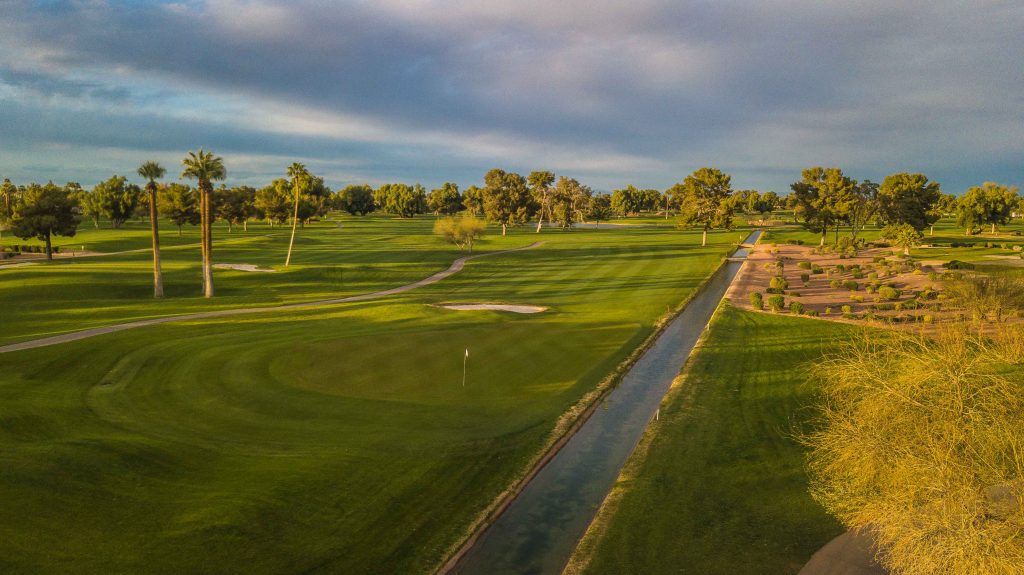 When stepping on the tee at the 18th on the Gold you encounter a hole turning left in the drive zone. A tree on the left side provides an aiming point. The expanse of the fairway lies to the right of the tree. The dividend comes from placing the tee shot as close as possible to that side. At the same time, a pesky canal runs parallel to the left side and must be avoided. The strategy is all about the angles — a tee shot hit away from the left edge sets up a nearly impossible approach angle. Regular players know this all too well.

The same canal forms the boundary with the left side of the green. Three massive bunkers protect the right and rear areas. When the pin is cut to the very front the spacing between the canal and left side bunker narrows considerably. Through the efforts of Richardson — the Jones legacy lives on with this grand finisher.