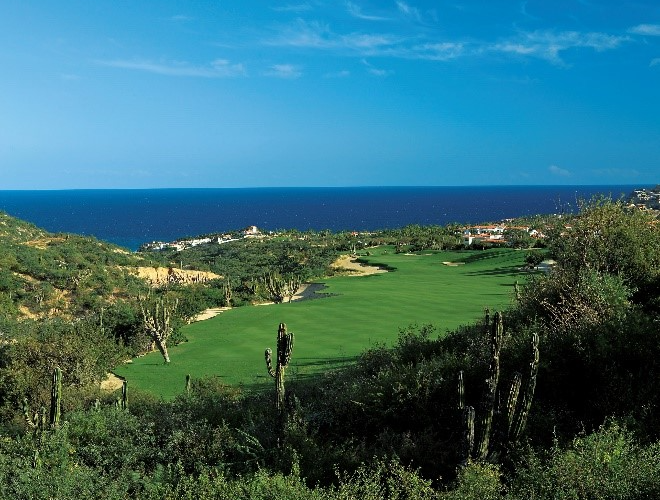 A vanguard facility that set the stage for upscale golf in Los Cabos, Palmilla’s core 18, the original Mountain and Arroyo nines, was the first course in the hemisphere to fully partake of the region’s unique mountain, desert and ocean ecosystem. This trio of elements, along with Cabo’s consistently sunny weather, sparked the imagination of developers and gave rise to future projects.

The golf club, which plans to roll out a new membership program next year, currently accepts daily-fee play. The 27-hole layout is a prime amenity for guests of One&Only Palmilla, a legendary resort that commands a spectacular site on the Sea of Cortes and remains unmatched for authenticity, elegance and old-world glamour.

Several holes call for heroic carries over no man’s land from the back tees, but broad terraced fairways, generous bail-out areas and open-entry greens accommodate players of lesser attainment. Five sets of tees provide admirable versatility and strategic nuance. The club’s Ocean nine, added by Nicklaus in 1997, drops 600 feet from the first tee to the sixth green, transporting players from the mountains to the sea.

According to Lloyd Walton, director of golf, the club is celebrating its anniversary by upgrading the overall golf experience. For example, Palmilla recently acquired a new fleet of Club Car electric carts. The club will soon take delivery of Fat Tyre electric scooters, an ideal mode of transportation for those seeking a more adventurous way to navigate the fairways. Lastly, course conditions, from tees and greens to fairways and bunkers, have improved noticeably over the past few months.

Walton noted that on-course comfort stations will start construction shortly and will offer players all-inclusive food and beverages during the round. One&Only Palmilla, the club’s lodging partner, will design the menu for the comfort stations.

Nicklaus, known as the ‘Golden Amigo’ for his role in spearheading the growth of golf in Los Cabos with his prolific output as a course designer, has returned often over the past 30 years to build several additional layouts at the tip of the Baja peninsula. Yet Palmilla’s idyllic 27-hole facility, arguably the fairest test of golf in town, celebrates its storied anniversary as the queen of Cabo golf.

Situated at the tip of the 1,000-mile long Baja Peninsula, Los Cabos is home to award-winning hotels, resorts, championship golf courses, rejuvenating spas and world-class sport fishing. With a unique landscape of dramatic desert and dazzling beaches, Los Cabos is an exotic escape within easy reach of most U.S. and Canadian cities. For more information, images and videos from Los Cabos, visit www.visitloscabos.travel, follow us on Twitter @LOSCABOSTOURISM and visit us on Facebook, YouTube, Pinterest and Instagram.