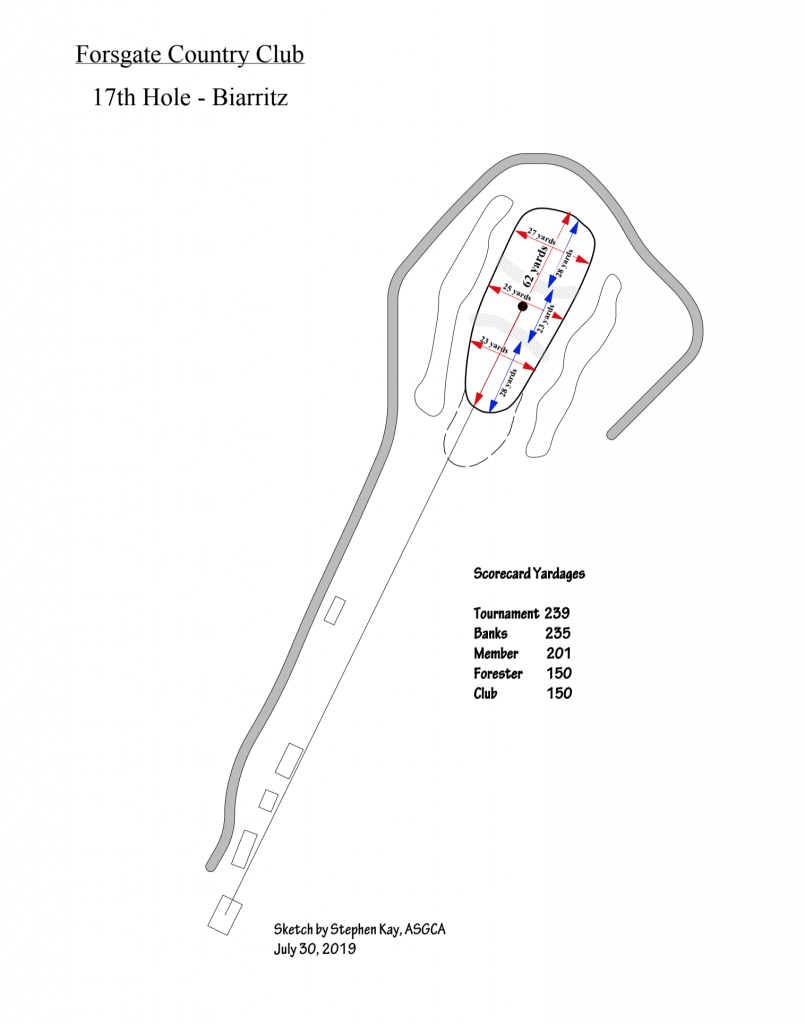 The name Charles “steam shovel” Banks may not resonate with many golfers but Banks learned his craft in working with legendary architect Seth Raynor who was mentored by the father of American golf — Charles Blair Macdonald. Banks was particularly enamored in excavating sites so that deep bunkers and massively contoured greens were the norm — hence the name “steam shovel.”

Banks also followed a general formula in crafting template holes originally quite famous at other courses in the United Kingdom and Ireland. Opened in 1931, the Banks Course at Forsgate Country Club is located halfway between the two major cities of New York and Philadelphia. Situated on rolling farmland the layout provides a venue with a wide array of shotmaking challenges.

The four par-3 holes at The Banks Course at Forsgate Country Club are collectively second in overall grandeur only to the quartet of similar holes found at the iconic Pine Valley. As the penultimate hole, Banks envisioned a long par-3 hole with a highly crafted sense of elasticity.

The 17th patterns itself after the famed Biarritz hole in France. That hole is a lengthy par-3 played to a green with three distinct sections.  The putting surface has a frontal area before a significant dip to a middle area then rising again to a back section. The most acclaimed hole of this style is found at the 9th hole at Yale Golf Club in New Haven, CT. The 17th also includes two very deep and long bunkers flanking both sides.

Over the course of time the nature of the Banks design at Forsgate was allowed to slide away from the original design intent. For a number of years only the rear section of the green at the 17th was kept — the middle and frontal areas reverting to fairway grass.

When Chris Schiavone took total ownership of the club 20 years ago he had already been on the frontlines owning and operating various golf clubs throughout New Jersey. Schiavone was determined to resurrect the Forsgate brand name and at the core of that effort was bringing back to life the central design elements Banks envisioned.

Architect Stephen Kay, who is based in New Jersey, had long been an admirer of the work Banks did at Forsgate and eventually was brought on board by Schiavone in 2006 to serve as ongoing course consultant.

Kay recommended to Schiavone that the original Biarritz design be restored at the 17th. That process took a considerable amount of time to complete. “When we slowly restored the 17th to its true dimensions it took 18 months of slowing lowering the height from fairway — approximately one-half inch to a green height of .125,” said Kay. “We would aerate and topdress once a month from April thru October. We also had to soften the four corners of the top slope of the valley since at .125 it was scalping.”

How big is the green now? It’s roughly 62 yards in length and covers a total of approximately 15,000 square feet. From the back tee area to the deepest pin location the hole can stretch to 260 yards. Unlike other Biarritz holes which often do not provide a center-placed pin location, the 17th at the Banks Course is able to do so. The sheer elasticity of the hole now permits a wide variety of lengths and hole placements. Wind direction can greatly impact club selection and when encountering a northerly wind it’s not uncommon for many players to pull driver from their bag to reach the target — especially with a distant rear pin placement.

The Banks Course has clearly elevated iForsgate back into the forefront. Those having the opportunity to test their golfing skills here will long remember the qualities the 17th hole