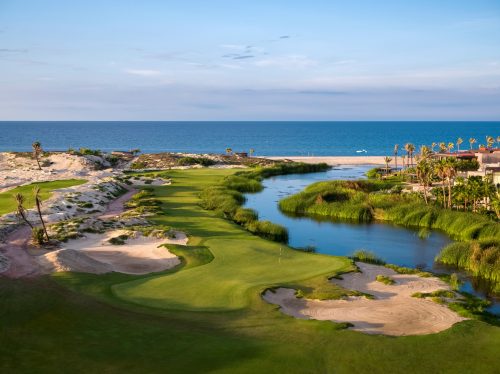 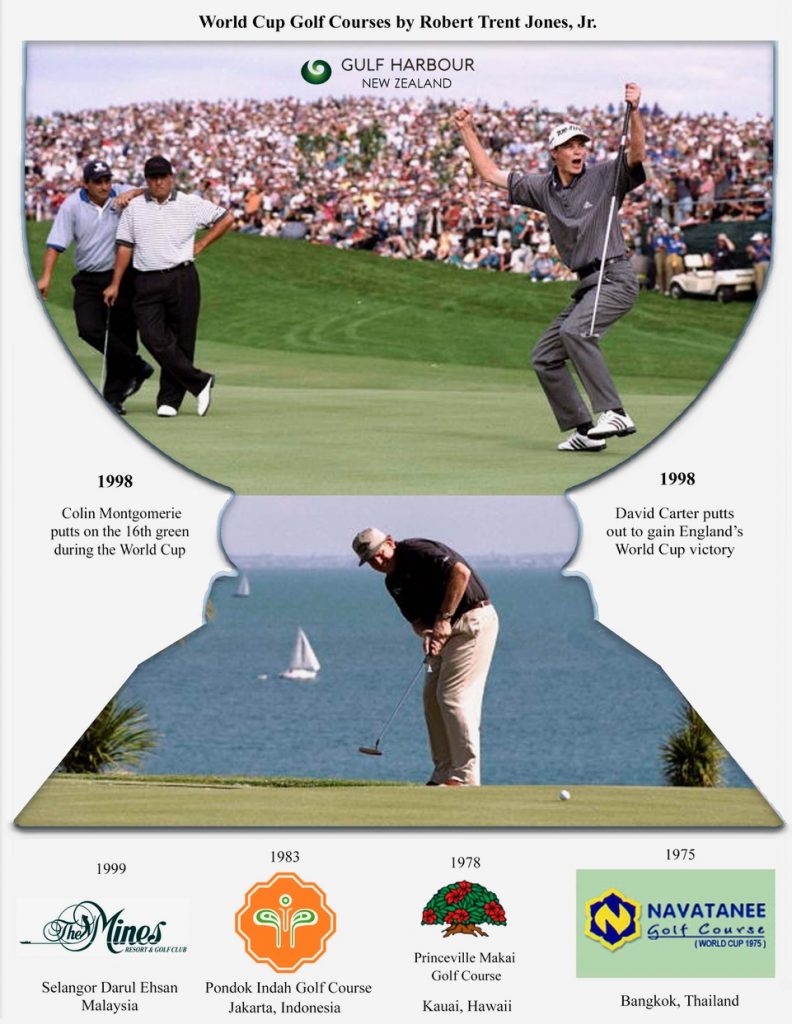 In a career spanning more than six decades, Robert Trent Jones, Jr. (Bobby) has designed more than 290 golf courses in over 40 countries on six continents. RTJ II courses have won countless awards and accolades, been ranked among the best layouts throughout the world, and hosted tournaments on every major golf tour. The Trent Jones name has become a trademark—like Rolex watches or Faberge jewelry: it guarantees a well-crafted golf venue set comfortably in its natural environment. He is also a member and past president of the American Society of Golf Course Architects (ASGCA). 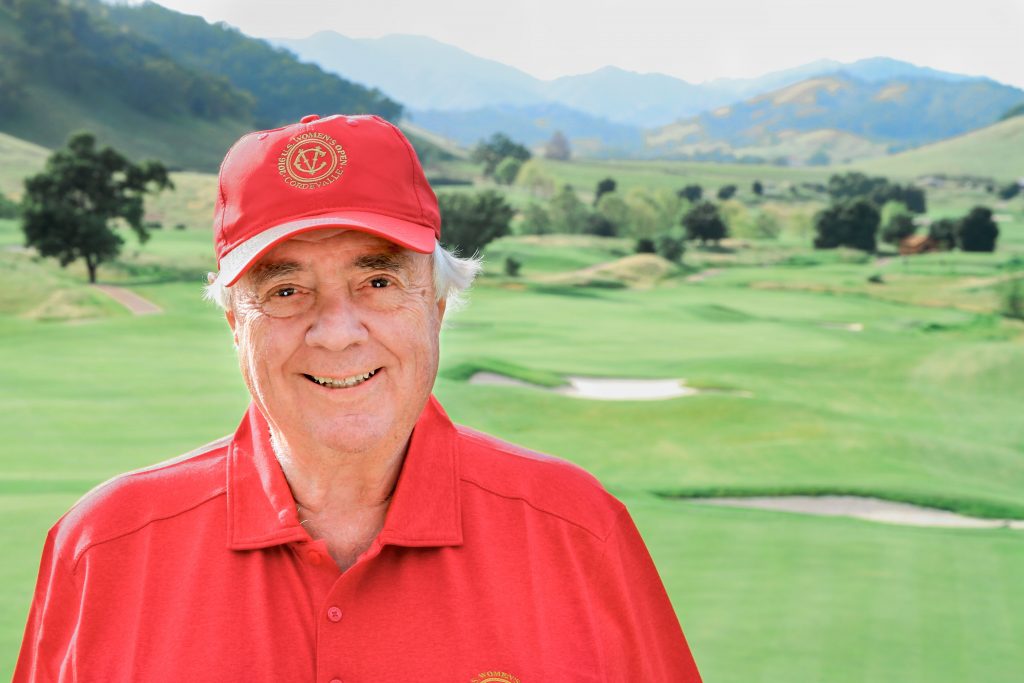 The most important event that catapulted my golf course architecture career was the publishing of an article by the Hall of Fame writer Dan Jenkins that appeared in the May 15, 1972 issue of Sports Illustrated, entitled “A Case of Paradise Improved.” The piece described the Princeville Makai course, which revealed and lauded my work: “Hawaii’s Princeville, Westernmost Golf Course in U.S., is a Development in Tropic Splendor Touched by Genius.” It was this piece that indoctrinated me into “the Club” of excellent golf architecture and its practicing architects. Thanks Dan.

Golf rounds surged in 2020 during the pandemic – do you see that spike continuing even when the pandemic concludes?

Yes, rounds increased because people of all ages wanted to get out of their homes and needed to exercise, whether they hiked, or skied, or pursued other individual sports, they did it. Golf is the ultimate individual sport, and an acceptable no-touch sport.

I don’t believe this is a spike—I think that golf is a lifestyle, that families are going to continue to enjoy golf, spending time outdoors while reducing social interaction in the clubhouse.

What crucial lessons do you believe the broader golf industry will need to learn following the pandemic?

Through wars and past pandemics, as well as the Great Depression, golf always survives and thrives. One lesson learned is to make access to golf courses easier to a wider range of players. 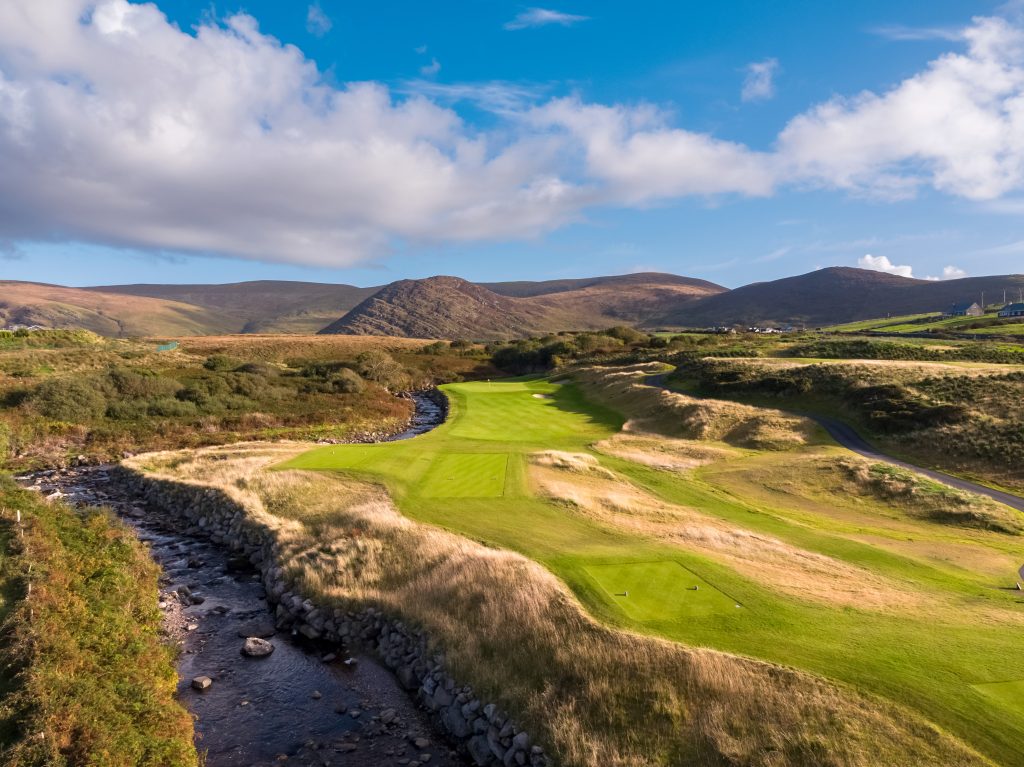 You’ve been active in golf course architecture for over 60 years — what still excites you about being active in the field and what key lesson that you know now would you share with those aspiring course designers?

The best way to keep it going is to have grandparents play golf with grandchildren, which I am doing here in Kauai. And, to pass the sport and interest in the sport along to our children when they are young. Once they are hooked on golf, they’ll come back.

Golf designs should reflect the skill levels of a wide range of players. We have taken great pride over the last 10 years in creating courses and reimagining existing courses with a distinct emphasis on increasing the “fun factor.”

Was Chambers Bay hosting the 2015 U.S. Open — the highlight of your design career?

Chambers Bay was one of the highlights in my life among others. Princeville at Hanalei and crafting a beautiful course there from 1968-71 was another highlight. Working in Asia Pacific where five World Cup events were held at our courses was another.

Designing alongside my dad, including at Spyglass Hill Golf Course, and collaborating with Tom Watson on The Links at Spanish Bay at Pebble Beach, were two other highlights. For 20 years –on and off—building the first 18-hole golf course in the then Soviet Union was another career highlight. 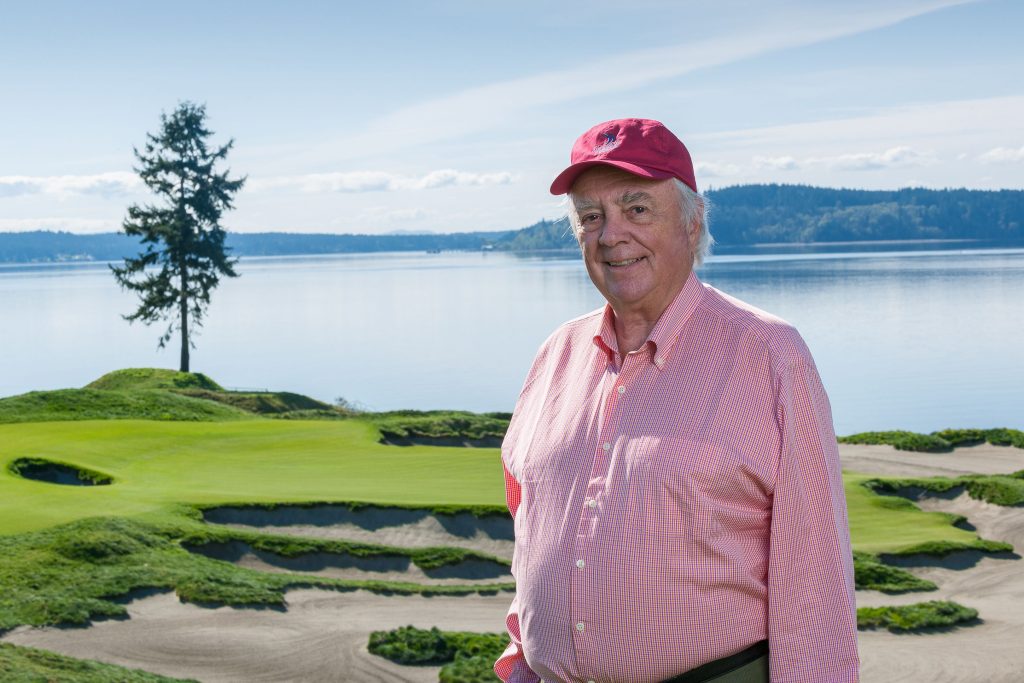 Your father, Robert Trent Jones, Sr., was a preeminent figure in global golf design. In what ways do you see your work mirroring him and in what ways diverging from him?

He taught me how to sketch. That is, to see land and render it pencil to paper. “Erasers are useful, too,” my father used say. If your golf concept doesn’t fit the site, “Erase it and start again.” He also influenced me to play golf as a teenager, and I fell in love with the competitive game. And he taught me how to think tactically around any golf course if it was well designed.

The static elements, like distance measurements, the sculptural flow of line naturally were all marks of his aesthetic and his influence on me. Differences between him and me? He tended to defend par straight on against expert golfers with obstacles, and I design from the outside in, to make the game fun and provide many different options to reach the eventual target—the green and the hole—from different angles and for different skill levels.

What are the most important skillsets an architect must have to be successful besides deep-pocketed benefactors?

You have to love the game of golf itself. To play it and enjoy it. And it’s important to play other people’s golf courses—both the new ones and classics. I’m not that in love with the classic courses that are penal, with one or two exceptions—Pine Valley being one. I’m more interested in playing strategic elements of Tillinghast designs, for example, or my father’s work.

My own work is type specific, adventuresome. I’ve gone around the entire world, and worked in all sorts of different locations, and adapted the cultures of those places into my courses.

The major golf organizations — USGA, R&A, PGA of America, PGA TOUR, LPGA — are all seeking ways to attract new players to the game with Millennials, women and minorities as Baby Boomers eventually age out. If you were counseling them what would you advise they be doing — whether individually or collectively — in order to do just that?

My advice to all stakeholders in the game of golf:

The professional tours are the elite guilds of the most skilled players and they are driven in large part by prize money and television as entertainment. Because of their individual successes tour golfers can be role models who will attract and encourage new players to join the game. These stars can be role models for young golfers generally, but the real heroes of the game are the 25,000 PGA teaching pros.

It’s actually the wide variety of kinds of golf courses, too, and easier and inexpensive access that will help hook new golfers and to keep them playing. For example, short courses that are not too difficult and are fun to play will attract beginners. Interesting practice ranges will help players pattern their swings and learn distance control. 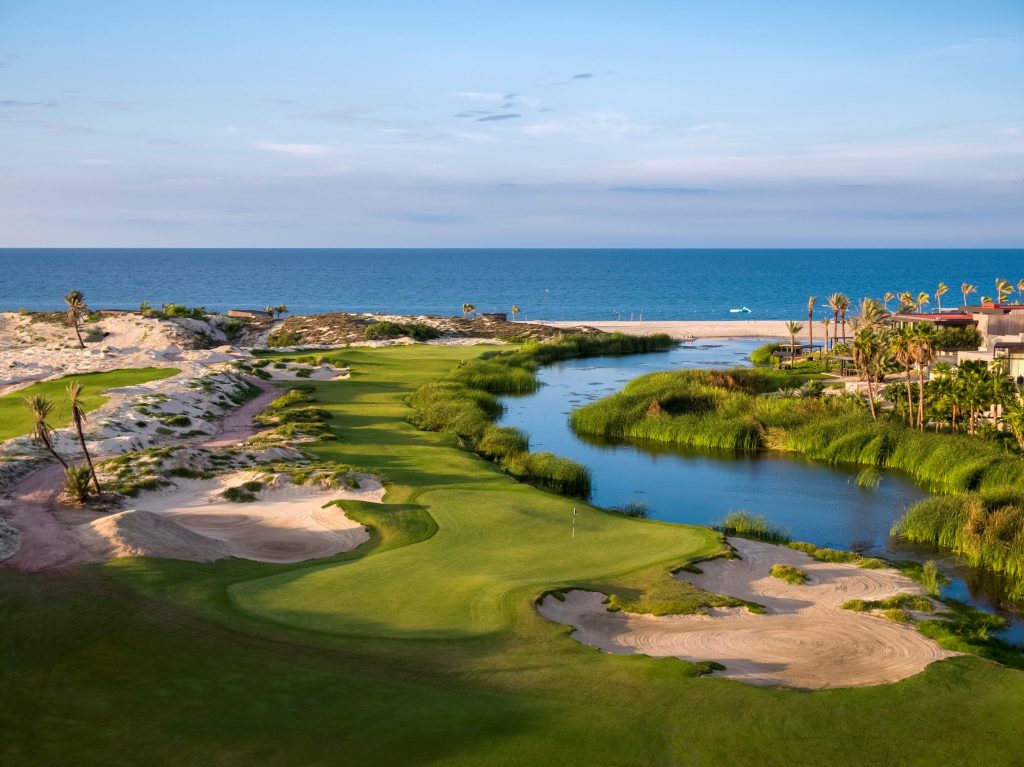 Curious to know — the five most transformative courses that opened globally over the time you’ve been designing courses are what?

I would say the remodeling of Oakland Hills and other courses in the 50’s and new courses in the 60’s (Hazeltine National, Bellerive) to make the U.S. Open Championship more worthy of a champion defending par in medal play competitions, such as Hazeltine in Minnesota, was transformative.

Harbour Town Golf Links was a counterculture reaction to those bigger open courses. Pete Dye and his wife, Alice, liked to play in Scotland, and he mimicked their pop-up greens and penal deep pot bunkers and influenced a reversion to the ancient, Scottish simple bunker.

Spyglass Hill was one of the first courses I worked on under the guidance of my father. The dunes land holes, and variety of terrain on which the golf course is routed still serves as a strong precedent for today’s modern design philosophies of naturalistic golf course architecture.

It was Moscow Country Club in Russia and early courses in China In the 1990s that led golf to become an Olympic Sport and thus, truly global.

I think using irregular tees or flowing tees at Chambers Bay was unique because it required the tee shot to be thought through before hitting it. Whether it’s transformative or not, it caused you to think. In the architecture and building professions, it was equipment innovations that transformed the game: the jet plane bringing golfers to resort golf courses, especially in warm climates; the golf cart facilitating play on mountain courses at high elevations, such as in Colorado and British Columbia; and the bulldozer allowing architects to use challenging topography in Japan and Korea to craft strong landforms.

If you could change one thing in golf unilaterally – what would it be and why?

The one unilateral change that I would propose would be to ban the wooden tee from the tee and just have golfers drop the ball between the tee markers and play it as it lies. I’ve written an entire paper on this topic. Length becomes less a factor in strategic choices for the beginning of each shot on each hole.

When I was growing up and playing golf at Winged Foot the great Open champion and sophisticated teacher of the game Tommy Armour, said “Laddie, when you choose to lay up—lay up! Don’t try to get too close to the cross hazards.”