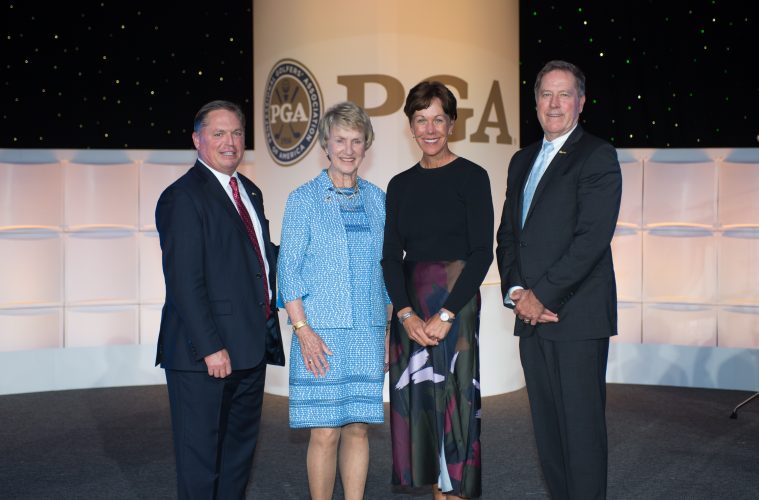 One of golf’s most respected ambassadors honored at the PGA of America’s 103rd Annual Meeting in West Palm Beach, Florida

WEST PALM BEACH, Fla. (Nov. 6, 2019) – Fifteen years ago, Barbara Nicklaus approached her husband Jack and declared that there was another “major” left to be won–to provide the best healthcare for children in South Florida.

The teamwork that had been a staple of one of golf’s most honored families ignited yet again. The byproduct is today’s Nicklaus Children’s Healthcare Foundation, and Barbara Nicklaus, its chair and co-founder, is a beacon of hope for the next generation in South Florida and across the country. One of golf’s most respected ambassadors, she has been the catalyst to raising more than $100 million in the past 15 years.

On Tuesday night, Nicklaus was the recipient of the 2019 PGA Distinguished Service Award, the PGA of America’s highest honor. Nicklaus, 79, followed her famous husband—who was similarly honored in 2000—and became the first sole female recipient since Patty Berg in 1995. Since 1988, the PGA Distinguished Service Award has honored outstanding individuals who display leadership and humanitarian qualities, including integrity, sportsmanship and enthusiasm for the game of golf.

The award ceremony at the Palm Beach County Convention Center was held in conjunction with the PGA of America’s 103rd Annual Meeting. Prior to Nicklaus taking the stage, some of Nicklaus’s 22 grandchildren narrated a video presentation. That video also featured her daughter Nan, along with patients aided by the Nicklaus Children’s Healthcare Foundation.

Barbara Nicklaus had indeed captured a “major” many times over. 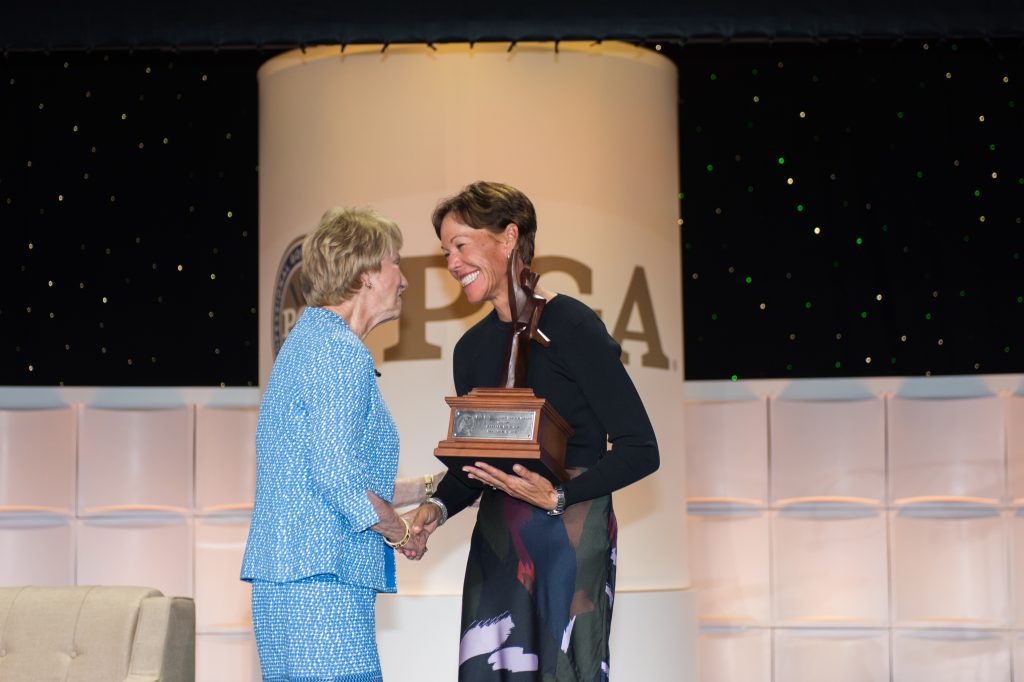 “Golf has given Jack so much, most importantly it has been our vehicle to attempt to give back to the game he loved when I met him and the game that I now love, cherish and support,” said Nicklaus. “We always want to be successful, and I don’t mean as in only wealth and power, but in finding meaning in our lives, testing our capabilities and hopefully making the world a better place for having passed through it.

“Jack and I feel so blessed to be able to help others, particularly children. We pray that our life’s work has made a small difference as we have tried to give back through this phenomenal game even though we could never give back as much as we have been blessed to receive. But, we won’t keep trying.”

“My mom and dad as a team are absolutely incredible and role models for myself and my kids,” said Jack II. “I don’t know that there’s anyone prouder than myself listening to my mom’s grandkids . . my kids. . .kids, talking about my mom. It says it all.”

Jack Nicklaus III said that he was proud of the opportunity to honor his grandmother in a special way.

“My whole life, I have the name. It provokes a certain response,” he said. “It’s impossible for that to happen without Barbara Nicklaus. She raised five kids that I think turned out dang good. She kept my grandpa’s career on the rails. By the time I came around he wasn’t playing golf anymore. She’s had her hand in raising 22 grandkids. She hears enough out of her kids. The children you see in the hospital are her extended family.” 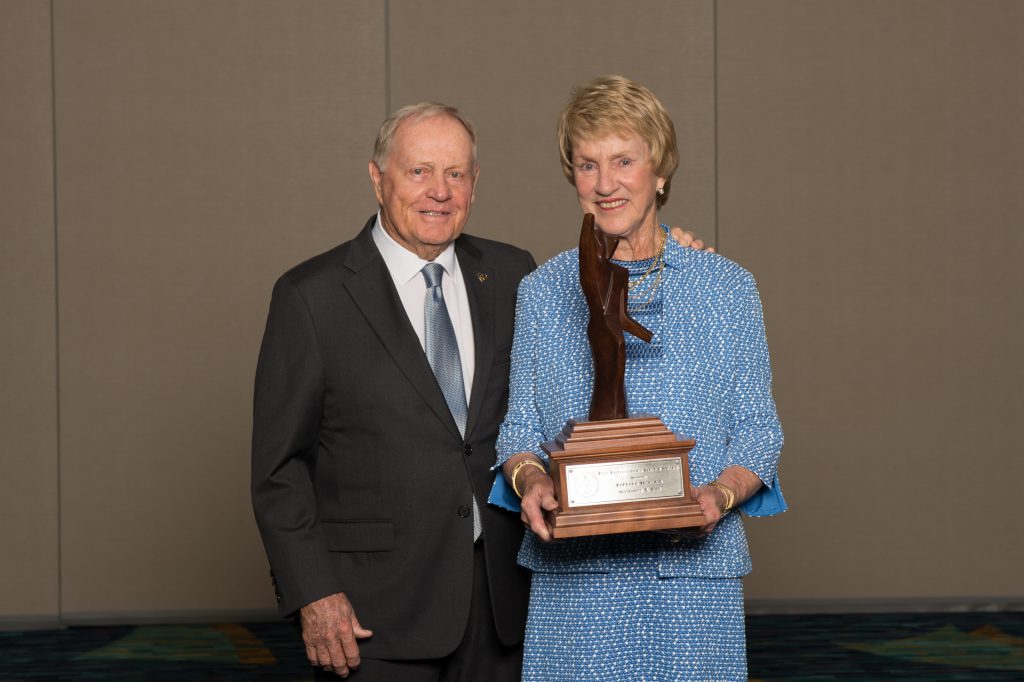 Born Barbara Jean Bash in Columbus, Ohio, she was the daughter of a public high school mathematics instructor and became a pre-nursing student at The Ohio State University, where she met her future husband.

While her husband went on to a legendary golf career, Barbara became the mother of five children, one of the most respected wives on the PGA TOUR and a prolific fundraiser for numerous charitable organizations.

Among the Nicklauses’ favorite charities is Nationwide Children’s Hospital. When it was known as Columbus Children’s Hospital, the facility provided the emergency care to nurse their only daughter, Nan, who contracted pneumonia before her first birthday after accidentally inhaling a portion of a crayon, which lodged in her windpipe.

Nan, 54, said that she can only smile as the story of her near-tragic episode is repeated.

“I hear the story and I think, oh my gosh, not again,” said Nan. “But, it prompted my mom and dad to do what they do today. They have a whole another family at the hospital and they love them. It has been 15 years and we have made big strides from the beginning.”

The Memorial Tournament presented by Nationwide, founded in 1976 and hosted by Jack and Barbara Nicklaus at Muirfield Village Golf Club in Dublin, Ohio, has benefitted Nationwide Children’s Hospital since its inaugural year. The Memorial has raised more than $36 million for Central Ohio charities, including over $20 million to support the programs and services at Nationwide Children’s.

Barbara Nicklaus, who was previously honored by the PGA in 1998 as the inaugural First Lady of Golf, gave the audience another reason why she has made giving back part of her DNA.

“As C.S. Lewis said, you are never too old to set another goal or to make a new dream,” she said. “So, I will continue to dream and to set new goals and I promise that I will try very hard to make you proud that you have chosen me for this phenomenal honor.”