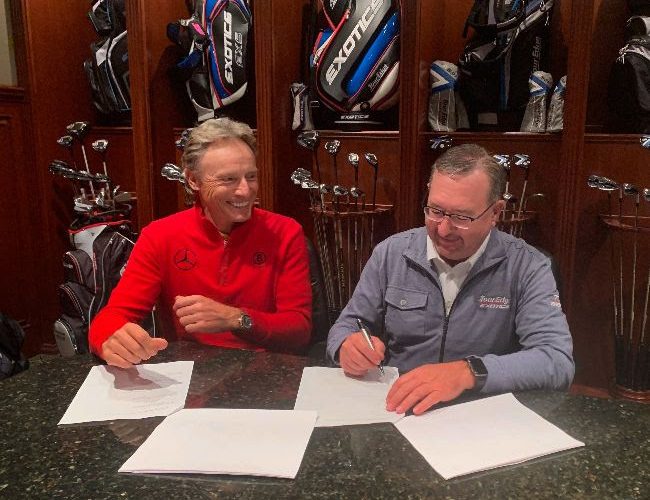 Today Tour Edge announced that Bernhard Langer, the #1 ranked player on the PGA Tour Champions, has joined its professional Tour staff in a multiyear agreement.

Langer recently played a Tour Edge Exotics EXS Pro Hybrid at the November Masters that helped the age-defying legend become the oldest player to make the cut in Masters history. 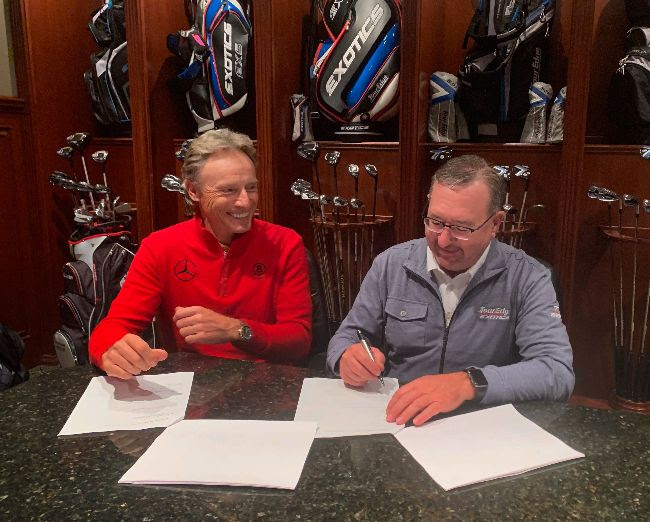 In addition to his hybrids, Langer is working extensively with the company’s Tour Department to dial-in the specs on the new Tour Edge Exotics driver, fairway metals and a complete set of Exotics irons and wedges.

Bernhard Langer makes it official with Tour Edge President David Glod
“I’m extremely excited to be joining the Tour Edge staff, they have been truly incredible to work with as I start updating my equipment,” said Langer. “I have been playing many of the clubs in my bag for a long time and when I started working with Tour Edge out on the PGA Tour Champions, I realized that they were the best option to getting me exactly what I needed to continue to perform at the highest level.”

Langer will also be carrying a Tour Edge Exotics staff bag and wearing the Tour Edge logo on his right sleeve.

“It’s going to be a lot of fun working with this team on maximizing performance and getting into some of their really innovative technology, as well as helping to promote the brand with the other players on Team Tour Edge by bringing their message to the masses in a series of new television spots,” added Langer.

“To be able to sign this awe-inspiring icon to our professional staff is a crowning achievement in our 35 years as a golf brand,” said Tour Edge President and founder David Glod. “He’s one of the very best players to ever play the game, so to have him trust Tour Edge to keep him at the top is something we are extremely proud of.”

“We’ve admired Bernhard for many years so to be able to start working with him has been an amazing and humbling experience,” said Glod. “He is a shining example of what a

professional should be, a great gentleman and global ambassador to our sport. We believe this signing will introduce a lot of Bernhard Langer fans around the world to Tour Edge.”

Langer will join the Tour Edge professional staff that includes Tom Lehman, Scott McCarron, Tim Petrovic and Duffy Waldorf, and the company reports that it will announce another addition to their professional staff in the coming weeks.

Despite only having five professionals on their tour staff currently, over 100 different PGA Tour players have played over 1,000 Tour Edge clubs in the last three seasons.