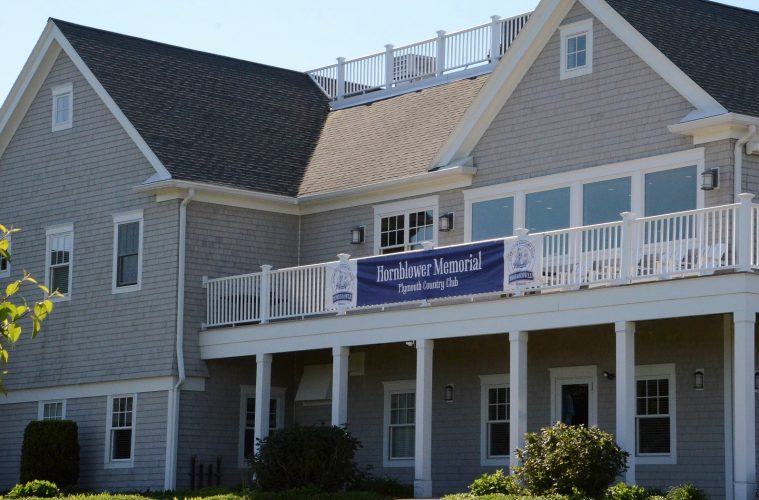 Matt Parziale, 2017 U.S. Mid-Amateur and Mass Amateur champ and reigning MGA Richard D. Haskell Player of the Year, returns to the demanding confines of Plymouth Country Club in America’s Hometown to defend his 2018 title, which he won in a playoff with Jonathan Stoddard. Besides Stoddard, who can’t wait for the rematch, Parziale will have to contend with a full field of more than 150 other skilled players from New England and beyond. 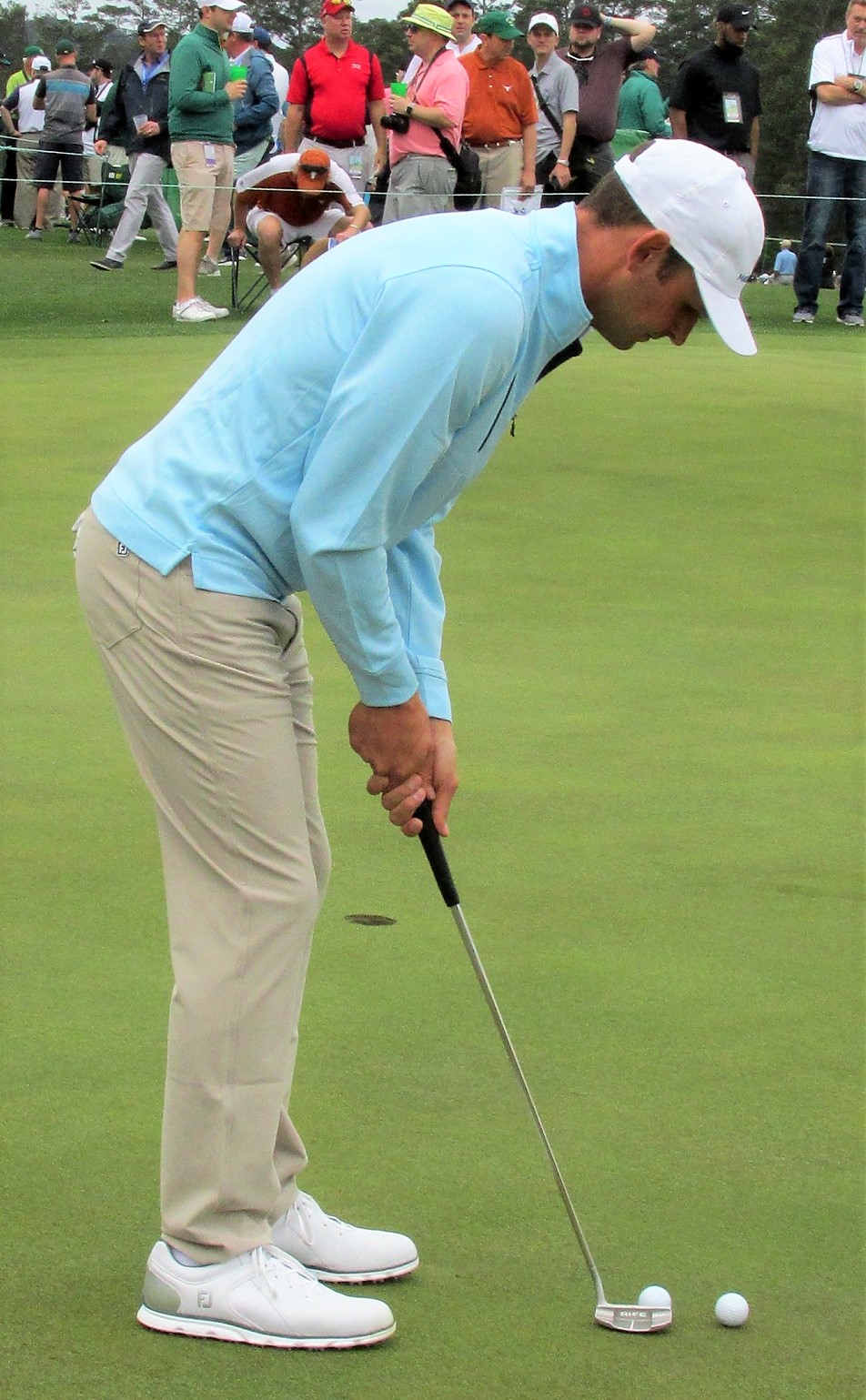 Matt Parziale lines up a putt on the practice putting green at Augusta National during the Masters. The defending Hornblower champ won the 2017 US Mid-Amateur, which entitled him to exemptions in the 2018 Masters, the US Open, and the US Amateur. (Vicky MacKay)

Parziale and Stoddard Prepare for the Rematch

With three consecutive Haskell awards (2016-18), Parziale, a member at Brockton’s Thorny Lea, will use the Hornblower as a major steppingstone toward garnering his fourth in a row and his sixth overall (2009, 2014). Parziale won his first Hornblower in 2007 when he was in college and leading Southeastern University in Lakeland, FL, to a national championship. He said about his 2018 performance, “I’m extremely proud to have won this great tournament for the second time. I love playing here at Plymouth. It’s always a great test of golf. The course plays very difficult, and the greens are some of the hardest we play all year. And the course and the members always make this event a fun time.”

Parziale then reminisced about his playoff victory over Plymouth CC member Stoddard, both of whom had shot even-par 138’s on the par-69 layout that played at 6,408 yards. “I was certainly lucky to make the playoff with Jonathan Stoddard, who played really well both days, and I was very fortunate to make a nice putt on the first playoff hole.” Parziale shot a one-under 68 on Saturday to go along with his 70 on Friday to match Stoddard’s two 69’s. Parziale then made a 10-foot putt on the first extra hole to seal the deal. Parziale’s many fans, appropriately named the “Mattsters,” will be at the course again to cheer on their leader.

Stoddard, who works for Titleist and sports a current +1.2 GHIN index, is greatly anticipating the sequel and has been practicing religiously on his home course. He said, “I’m really excited for another chance to compete in this great tournament. I always have this weekend circled on my calendar and hope that I can use last year’s experience of making it to the playoff to my advantage. I can’t predict my score, but I can definitely guarantee that I’m going to have a great time!” Should Stoddard prevail, he will be only the second Plymouth CC member to win the coveted crown, Bill Buttner being the first in 1975 and 1977. 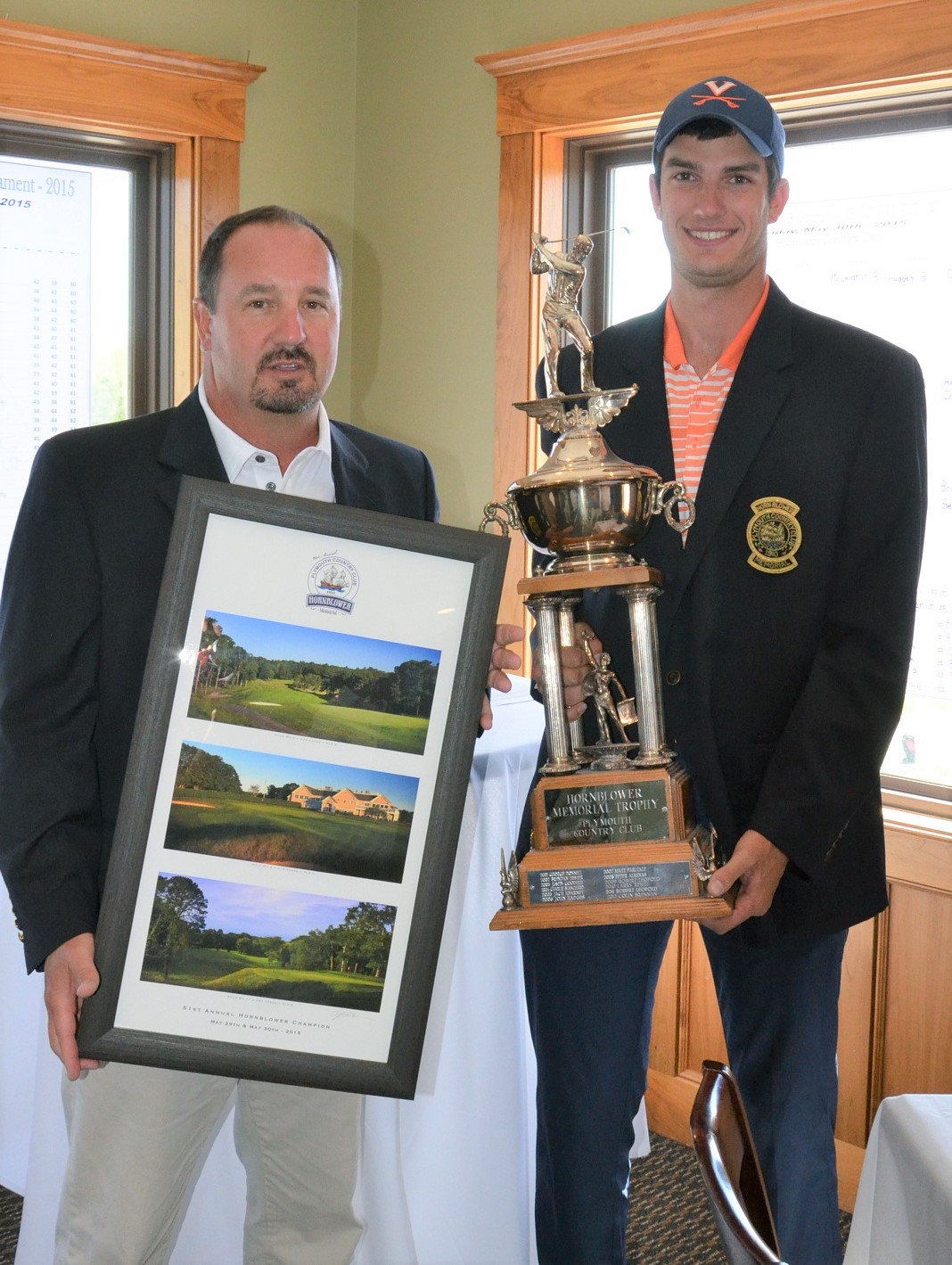 At 6-foot-6, Nick McLaughlin stands tall among his playing partners. In 2015, he overshadowed them all on his way to winning both the Mass Player of the Year and five amateur tournaments, including the Hornblower, the Mass Amateur Public Links, the Mass Amateur, and the New England Amateur. Here he stands tall with Tournament Chair Mike Ellis. (Vicky MacKay)

Former Champs and Other Contenders Appreciate the Tournament Allure

Buttner went on to a distinguished career as a professional golfer on the PGA Tour before retiring to coach at Eckerd College in St. Petersburg, Florida, but he remembers the Hornblower as one of the pivotal experiences in his career. He said, “All these years later, I still have very fond memories of winning the Hornblower. Doing so at my home course in front of friends and members taught me the game was very special. Winning the Hornblower was unquestionably also a huge confidence builder and major contributing factor to my future successes in college, the mini tour, and my career on the PGA Tour. Plymouth has always been a tremendous challenge because of the undulating greens, the diabolical leaves if you land the ball in the wrong place, and the unforgiving rough. I want to wish good luck and short putts to this year’s players, and I look forward to welcoming the next winner to that special group of Hornblower champions.”

Two local players deserve special mention as well because both have the ability to earn that top spot. Veteran Herbie Aikens, a member at nearby Pine Hills, is a perennial contender and has been one of the state’s best players season after season. He’s won the Southeaster Amateur twice (’16, ’18) and the Mass Four Ball four times (’09, ’10, ’16, ’17), the last two with his good friend Matt Parziale. They came in second this year at The International in Bolton.

Young Dillon Brown, a U of Maryland freshman and a member of the CC of Halifax, won the Mass Junior Amateur in 2017 and has been the Hornblower junior medalist in the last two events. He believes that his initiation into the very competitive realm of college golf will pay significant dividends. He said, “The Hornblower is one of my favorite events each year. The golf course is a great test, and the competition is top notch. I look forward to continuing my success at this year’s tournament.” 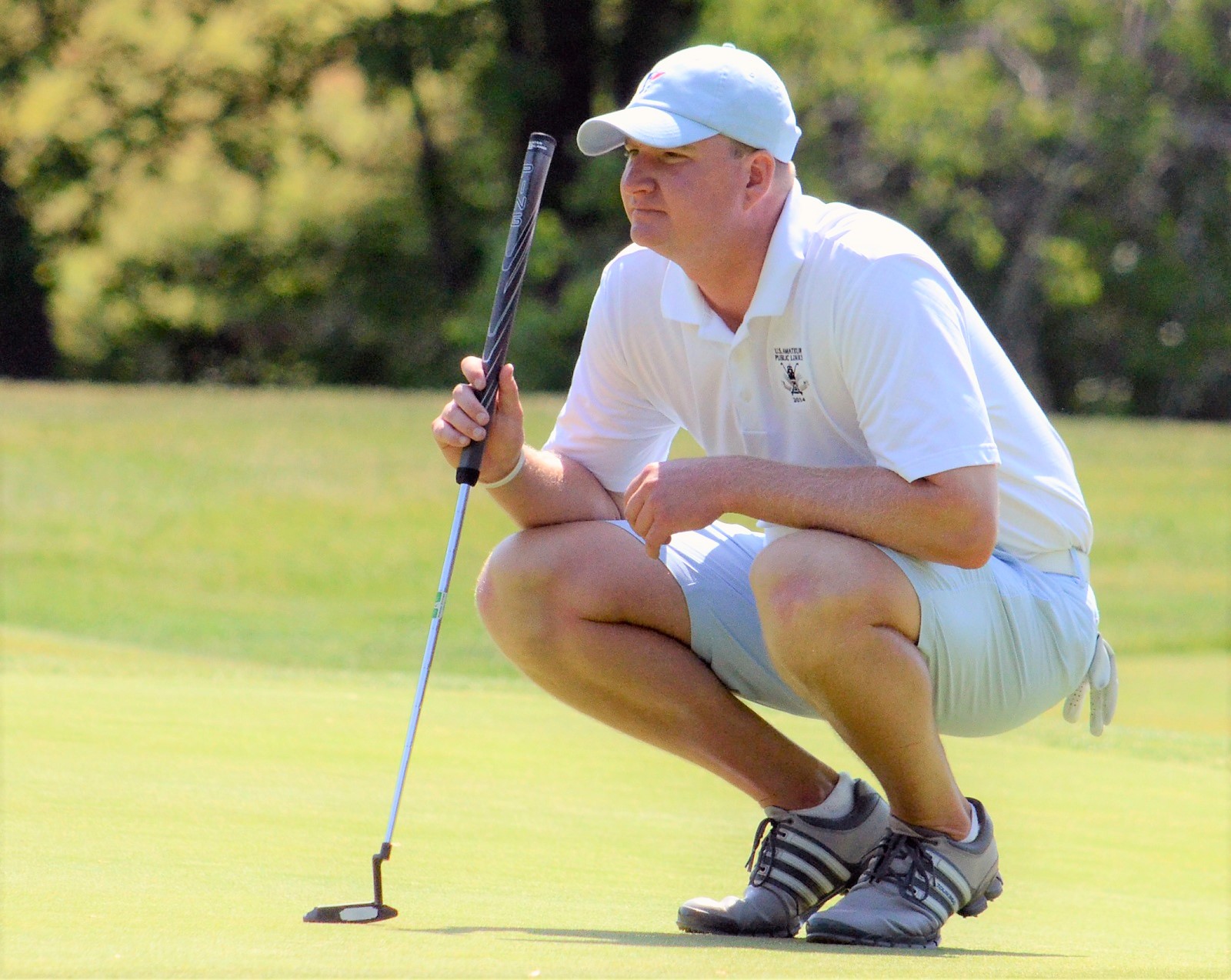 Herbie Aikens is year in and year out one of New England’s best amateur golfers. He was won two Mass Four Ball Championships with his good friend Matt Parziale, but he would especially like to join Parziale in the winner’s circle of the Hornblower, a championship that has eluded him to date. (Vicky MacKay)

Hornblower Leadership Is Ready to Welcome the Exceptional Field

Course super Ben Whiting has been fighting the capricious winter/spring weather but, as usual, he has the course in fighting trim. He said, “We got through the winter fine with all turf in good condition. Now we battle the extremely wet conditions along with the below average temps. With the rain and cool temps, the course has been on the softer side, and I would imagine it will stay this way until the weather pattern breaks. This winter we were able to do some significant tree removal throughout the course. The biggest changes players will notice are on 14, 16 and 17. In these areas most of the trees were removed, giving the holes a more wide-open look.  Moving forward, I do think the work will change how the holes are played. I would imagine that the wind is really going to become more of a major factor than ever. Watching how these championship caliber contestants manage the course will be very interesting.”

Both Tournament Chair Mike Ellis and Head Pro/Director of Operations Mike Roy agree that the Hornblower Memorial has assembled one of the strongest fields—if not the strongest!—in its history. Ellis said, “The field is exceptional. Couple these players with the course upgrades we have made, and we should be in for a great event from start to finish.”

Roy echoed Ellis’s enthusiasm. He said, “Ever since I was a Junior Member at Plymouth, following the Hornblower has been a very special event for me. Watching those great players always inspired me to improve my game by attempting to emulate the skills that they demonstrated during the tournament. Now in my second year as the Director of Operations, it is my pleasure to do whatever I can to attract and provide services for the fine golfers who participate in the Hornblower. Hopefully, lots of folks, including young golfers, will take the opportunity to view this year’s event.” 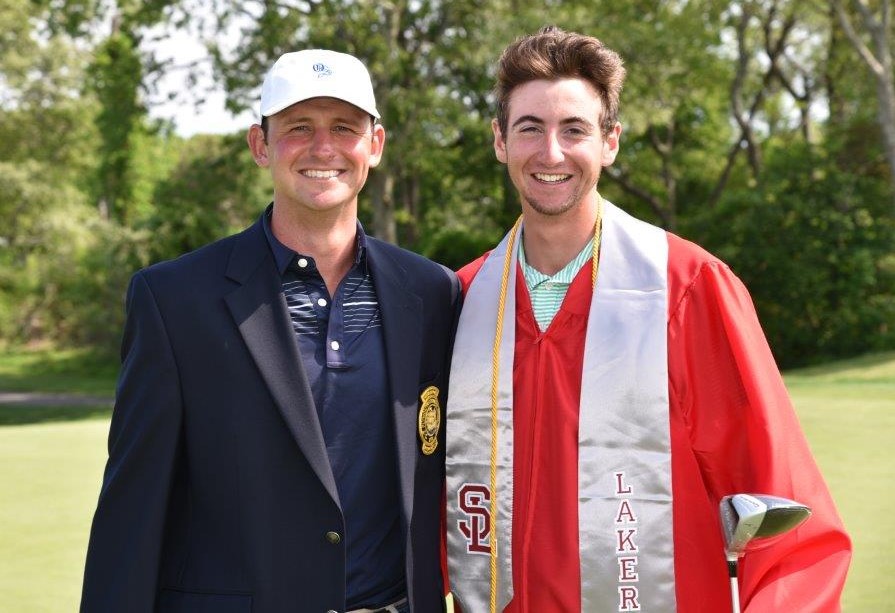 The 2018 champ Matt Parziale shares a special moment with the 2018 high school grad Dillon Brown. Brown passed up his graduation at Silver Lake to play in the Hornblower. He defended his Hornblower Junior Championship and then had an honorary graduation ceremony in the Plymouth CC clubhouse. (Joe Arsenault)

Club President Tom Mayer has the final word on the 55th Hornblower Memorial. He said, “The top amateurs in the country block this weekend off on their golf calendars, which is why the Hornblower always has such a talented field year after year. The winning score is always around even par, proving that this historic Donald Ross masterpiece continues to be a formidable challenge for today’s best players. In recent years the tournament has been won either on the final hole or in a play-off, providing edge-of-your-seat excitement for the spectators. On behalf of the members and staff of Plymouth Country Club, it is my pleasure to invite everyone to walk the grounds and to watch these players compete in one of New England’s finest tournaments. Complimentary access to all areas of the course and all club facilities are available to visitors throughout the tournament.”