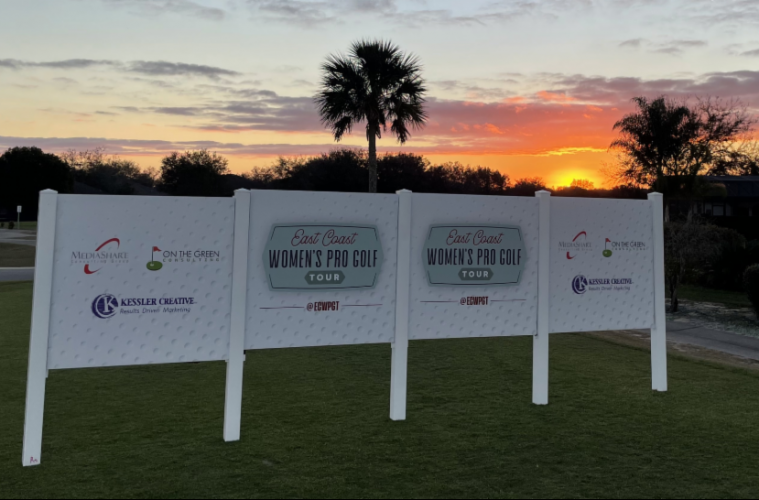 HERstory Made Today at the First Round of the ECWPGT

The historic first-ever round of the East Coast Women’s Professional Golf Tour (ECWPGT) was recorded today, and, fittingly, the clubhouse leader was playing in her first event as a professional.  On a chilly and blustery day that revealed only two players breaking par, Shelby Bruckmuller from Auburndale, Florida posted a 2-under 70 at Black Bear Golf Club in Eustis, FL.  Sitting one stroke back is Mohan Du (Beijing, China) at 1-under and Josee Doyon of Boynton Beach (FL) rests in third at 1-over par.  Jessica Porvasnik, winner of the inaugural PXG Women’s Match Play Championship, and Therese Warnerof Kennewick (WA), also playing in her first professional tournament, round out the Top 5.

Just launched in late December, the ECWPGT is a professional women’s golf tour with the mission of creating more and better playing opportunities for those aspiring to the LPGA Tour.  Today was the first round of the Dare the Bear Women’s Championship, the 2022 Winter Series opener.  There are seven more Winter Series events scheduled through March 30, before the Official Tour schedule kicks off at the end of April in Northeast Florida.

Bruckmuller graduated from University of South Florida in May 2021 where she played for one season after three seasons at Marshall University.   She spent the summer working as a pro shop assistant at Southern Hills Plantation Club in Brooksville.  Through consistent 15-20 MPH winds and stronger gusts, she leads a field of 46 players fighting over 54 holes for a first place check of $10,000.  The historic first shot of the tournament was taken at 8:00 AM by Hailey Davidson of Kissimmee (FL) who was paired with Orlando’s Luiza Altman. There were 16 states and four countries represented in the field.

Golf fans can follow the action on the Tour’s website, www.ecwpgt.com or via social media at @ecwpgt.  The ECWPGT will move next week to Orlando for the Rio Pinar Women’s Championship at the Rio Pinar Golf & Country Club.  Admission is free and the tour is seeking volunteers.