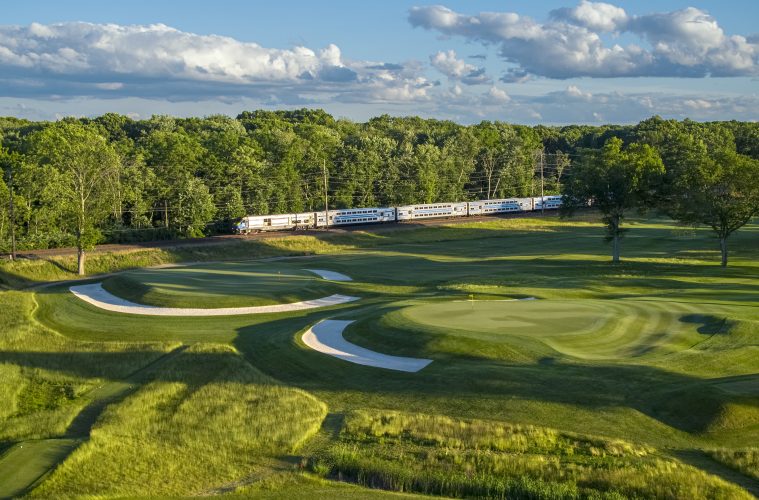 Updating a golf course — especially one with a distinguished pedigree can be a very difficult assignment.

Nassau Country Club’s rich history played a central role in the development of golf on Long Island — a hotbed of some of the most storied clubs in the sport. The Northern area of Nassau County — referenced as the “gold coast” — produced such architectural gems such as Piping Rock, The Creek, Deepdale, to name just three in concert with Nassau CC. 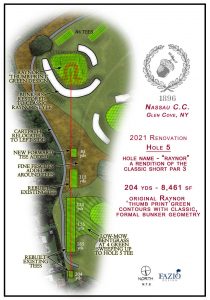 Over the course of time Nassau CC attempted to blend the fingerprints of several different architects. That resulted in a hodge-podge of various styles encountered. Sorting through this and settling on a consistent framework proved elusive until the recent hiring of Tom Marzolf from Fazio Design.

Marzolf made it a point to eliminate a number of superfluous bunkers. Going from a total of 116 that were no longer relevant and required constant maintenance to a total now of just 49. The “new” bunkers were re-positioned to reflect the gains in golf ball and club technology.

The putting surfaces at Nassau CC incorporate a range of vexing and intriguing movements. The green contours themselves were not altered although a few were expanded to regain lost pin position areas.

Total length of the course was increased from 6,702 to 7,102 yards. While par remained the same at 70 the bolstering meant an increase in the course rating from the championship tees from 73.4 to 75.1 and a corresponding boost in the slope rating from 141 to 145. Those who boldly attempt to play from the championship markers had best be prepared for the test provided.

One of the most engaging of holes was not changed but enhanced. The famed par-3 5th showcases the brilliant Raynor style and Marzolf smartly reinvigorated the core design ingredients in concert with presentation elements that have added much to the character of the hole. 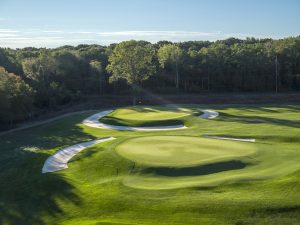 Play commences from several different teeing areas. Marzolf wisely provided for tees that can include a range of ability levels. A new frontal tee pad was created at 85 yards. The hole plays 204 yards from the championship position and there is the possibility the hole can be increased using available land extending the hole to 215-220 yards if the club so chooses.

The green sits slightly above the teeing area and the test presented is formidable. The putting surface is cordoned into specific sections. Two areas to the far left and right set slightly above a deep pronounced middle area. Raynor’s “thumb print” design is now updated with all its classic elements front and center. Total square footage of the green comes to 8,461.

Deep flat bottom bunkers must be avoided at all costs. The one most glaring appears like the letter “C” which fiercely protects the left side and wraps around to the frontal area. There is also another artfully shaped bunker that’s smaller and located in the right rear area.

Fescue grass has been wonderfully created by course superintendent Scott Blough and his team to create a timeless presentation that grabs the eye of the golfer the moment you step onto the teeing area. 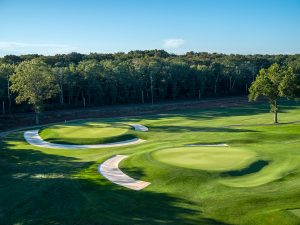 Marzolf also provided a closely mown section of grass that ties the 4th green into the 5th. The transition transports golfers in a seamless manner and sets the stage for what lies ahead at the 5th. For those who over shoot the green the penalty for such a brazen play is utterly swift and will reflect such pain on the scorecard.

Nassau CC labored for many years in finding and securing a scintillating golf canvass that ties the joint ingredients of a grandiose past into a dynamic robust future.

The 5th skillfully blends the twin elements of “look” and “play” into a tour de force outcome. 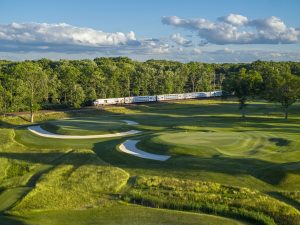