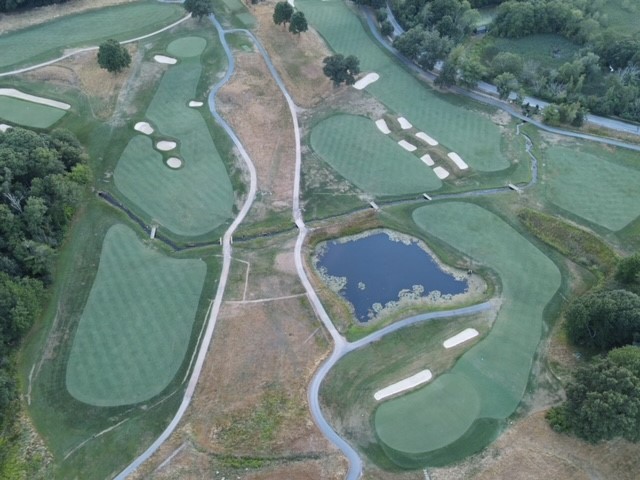 Updated in 2017 by Brian Silva

This year’s U.S. Open at The Country Club in Brookline shined a bright light on one of the USA’s premier clubs but it also showcased the sheer depth of quality golf that exists throughout the greater Boston area.

Just over eight (8) miles away is a club as steeped in history as The Country Club. Dedham Country & Polo Club was founded in 1887. The golf connection came a few years later when noted architect Donald Ross created a nine-hole layout in 1915.

Ten years later Seth Raynor — an engineer who apprenticed under the Father of American Golf — Charles Blair Macdonald — created an 18-hole layout that endures to this day. The Raynor design is the only one of its kind in Massachusetts.

Although the par-70 layouts plays under 6,300 yards the range of design details and the variety of different holes provides a quality challenge for all levels of players.

Dedham is located on rolling land that provides an ideal canvas for golf. This is apparent the moment you step onto the 1st tee and see the qualities of the land from the elevated perch.

The opener provides an array of options for golfers to ponder.

“The 1st is probably the most iconic hole at Dedham Country & Polo Club,” said Brad McCluski, PGA Director of Golf. “The views from the 1st tee box are not only some of the most beautiful but also extremely intimidating. There is a reason the hole is named Strategy.” 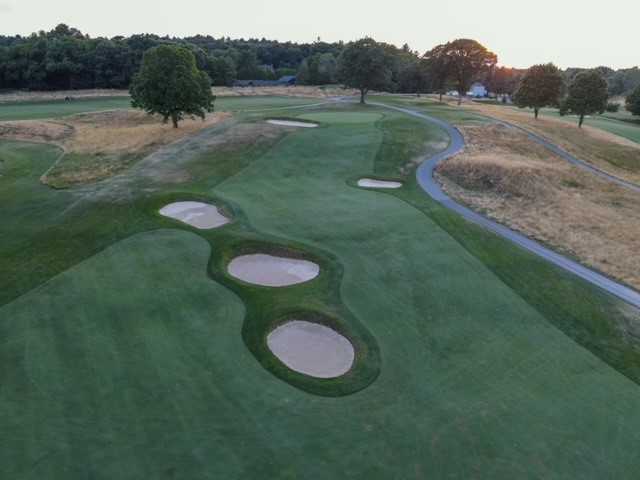 The elevated teeing area gives a total picture of what’s faced. A pesky creek — Rock Meadow Brook — cuts across the fairway on a diagonal from lower right to upper left. Golfers have to decide whether to cross the creek is doable for them or if laying back provides a safer option. 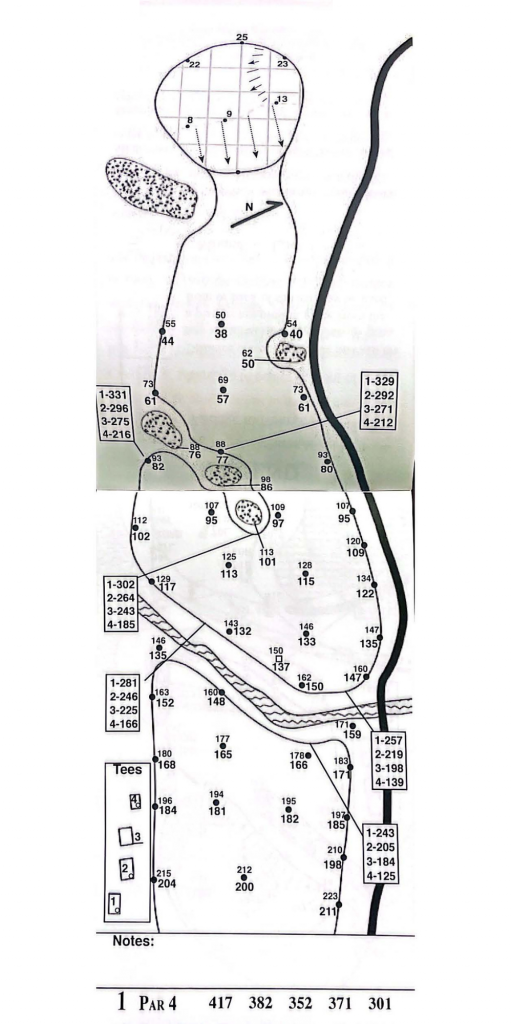 Those who hit a tee shot short of the creek are then left with a longer uphill approach to an elevated green. Stronger players who opt to cross the brook will encounter a series of three bunkers placed on a diagonal and occupying much of the left half of the fairway. Landing area beyond the brook and short of the bunkers is available as well as a narrow strip of fairway that runs up the right side and away from the bunkers.

The strongest of players can opt to hit over the bunkers but the daily wind conditions — often times encountering a headwind may preclude that possibility.

Even for players who cross the brook with their tee shot must still encounter the aforementioned elevated green with one’s second shot.

A single bunker guards the left side but it is the menacing false front that awaits the hapless play that fails to climb to a safe position. The putting surface is extremely demanding for any shot that are hit long or to the sides. Golfers can easily putt off the green if the speed is not carried out with the utmost precision.

The opener at Dedham mandates clear thinking and the soundest of executions. Walking off the green with a par is a clear testament to a golfer’s talent because skill — not luck — is uppermost in demonstrating one’s ability.

The 2nd at Dedham is equally intriguing. The hole moves in the opposite direction and like the 1st features an elevated tee. A new championship tee at 392 yards was added in 2021. At 392 yards the hole has been beefed up appropriately in terms of today’s state-of-the-art clubs and balls. 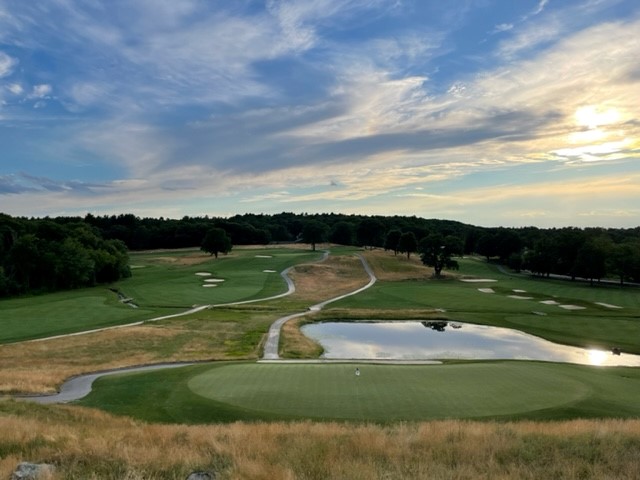 Rock Meadow Brook comes back into play again and decisions are needed by the player when contemplating the tee shot possibilities. Golfers can hit before the brook leaving themselves ideally anywhere from 130-150 yards away. 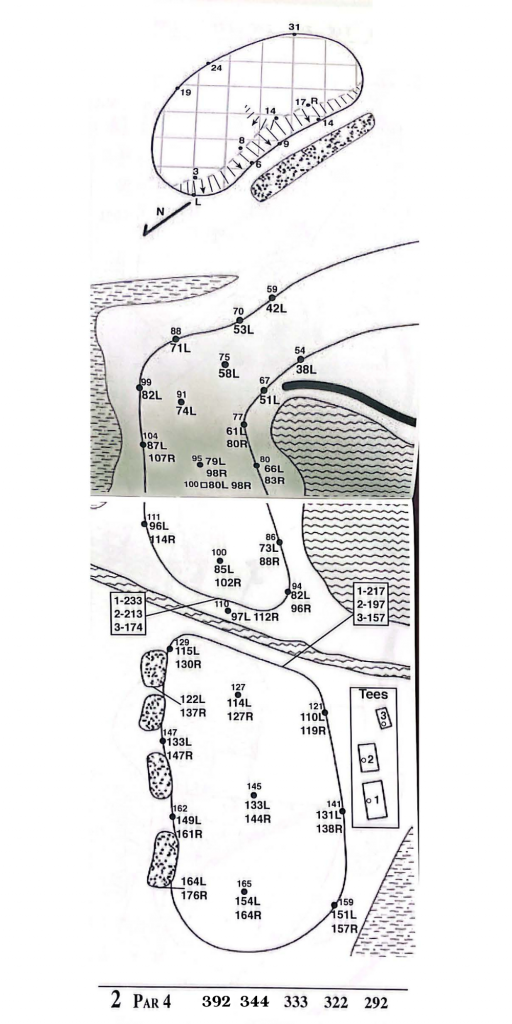 Golfers can also seek to carry the brook but that task becomes more challenging from the new back tee location. That requires a carry of 280 yards and faces another hurdle as the landing area narrows and is protected by a combination of rough and wetlands to the left and a pond to the right.

The green is set majestically on a high ridge. The putting surface runs on a diagonal from lower left to back right and has a steep fall-off to the right for those approach shots failing to carry all the way to the green. The approach is akin to invaders seeking to mount a fortress. Be aware all, but the best of plays, are repelled resolutely with the strong possibility that a deep frontal bunker will likely become the resting spot. Those landing in the bunker are then faced with a daunting severe uphill shot to a blind landing area onto the green.

“The 2nd hole does not get any easier,” said McCluski. “With a difficult tee shot that requires you to decide to play fearless or safe, the approach shot into the green is what makes the hole so difficult. It is extremely tough to hold any ball on the “Plateau” green no matter what club you hit with you approach.”

The opening two holes at Dedham are simply tour de force golf. In today’s world where power golf is often the defining ingredient for outstanding play — Dedham demonstrates convincingly that consummate shotmaking goes beyond the mere prowess of those who simply slug the ball.

Raynor created approximately 85 courses in his short lifetime — he passed away at age 51 in 1926 — just a year later after his work at Dedham was completed. His deft talent left behind such memorable efforts at Fisher’s Island, Camargo, Shoreacres, The Creek Club, the CC of Fairfield and Morris County, to name just a few. For architectural devotees Dedham delivers the goods and deserves special recognition in a State where the bar for exemplary golf is rightfully high.

The stewardship of the club’s leadership sought to reinforce the Raynor connection and was thoughtfully assisted through the hiring of Silva in providing the appropriate updating to this golfing gem.