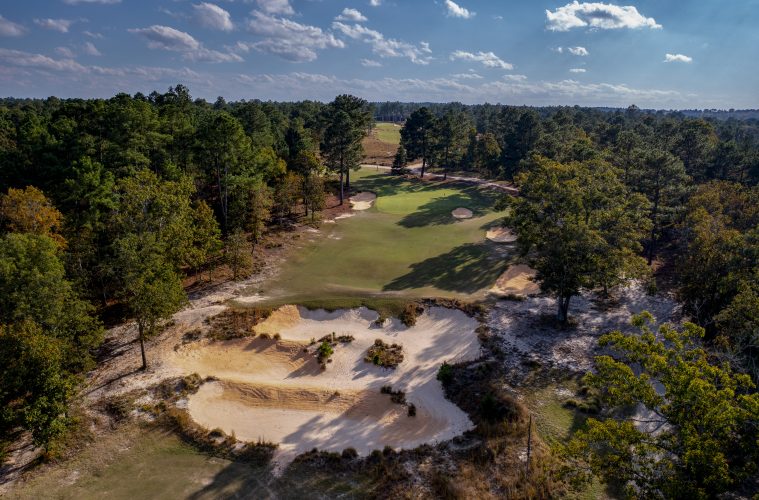 Grade “A” Architecture at The Dormie Club

The positioning of the penultimate hole on any golf course is a crucial one. Matches between players are reaching a conclusion and the desire to have an edge before reaching the tee at the 18th hole is something players want desperately to have.

Par-5 holes are routinely viewed by players an easy prey for birdies and, on first glance, when someone looks at the scorecard for The Dormie Club and sees a 499-yard hole listed the anticipation from players is that a likely birdie awaits. 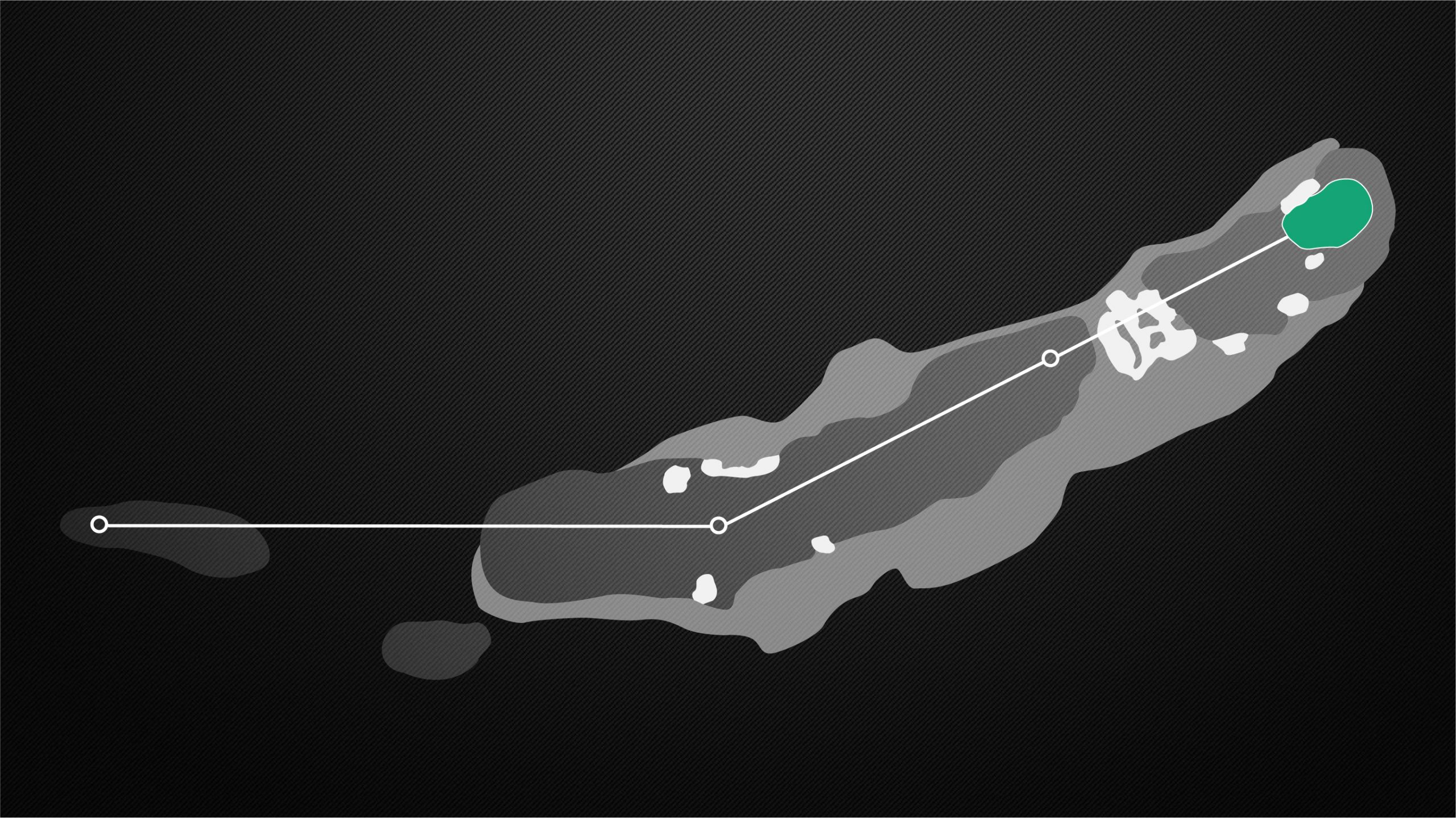 The renowned design of Bill Coore and Ben Crenshaw rightly pride themselves in creating holes that are anything but obvious. The 17th at The Dormie Club will not succumb to false bravado — only to the most committed strategies in conjunction with flawless execution.

The hole commences with a slightly uphill tee shot with a fairway moving gently right-to-left.

Bunkers bracket the landing area on both sides and the placements are varied. Strong players can contemplate a bold play in attempting to fly a ball over the left corner. That line of play requires a 280-yard carry over a protecting bunker to an uphill landing area. It’s not for the faint of heart and C&C are not about to have the hole surrender without putting up a fight. Generally, players will also encounter a prevailing headwind so the need for absolute commitment to such a perilous line of attack needs to be thought about with the utmost respect.

The real pressure happens on the 2nd shot.

As you gaze ahead you see the putting surface perched high on a rise. The Holy Grail indeed.

The hole is ably defended by a menacing waste area guarding the pathway to the green in the same manner as growling guard dog at a junkyard. The area in question is approximately 35 yards in length and eager to grab the hapless or foolish golfer who does not respect the disaster that waits for those caught in its clutches.

The area is fashioned to replicate what golfers face when playing Pine Valley’s famed par-5 7th and its accompanying “Hell’s Half Acre.” Balls that finish within its confines face the most terrifying of situations — the dreaded long bunker shot. And there is always the possibility that a ball may not have the best of stances or the freedom from any internal complications such as wild grasses that grow within its boundary.

Central to success at the 17th is finding the fairway. The carry of the cross-bunker means being able to hit two shots in excess of 450 yards. No small feat for sure. 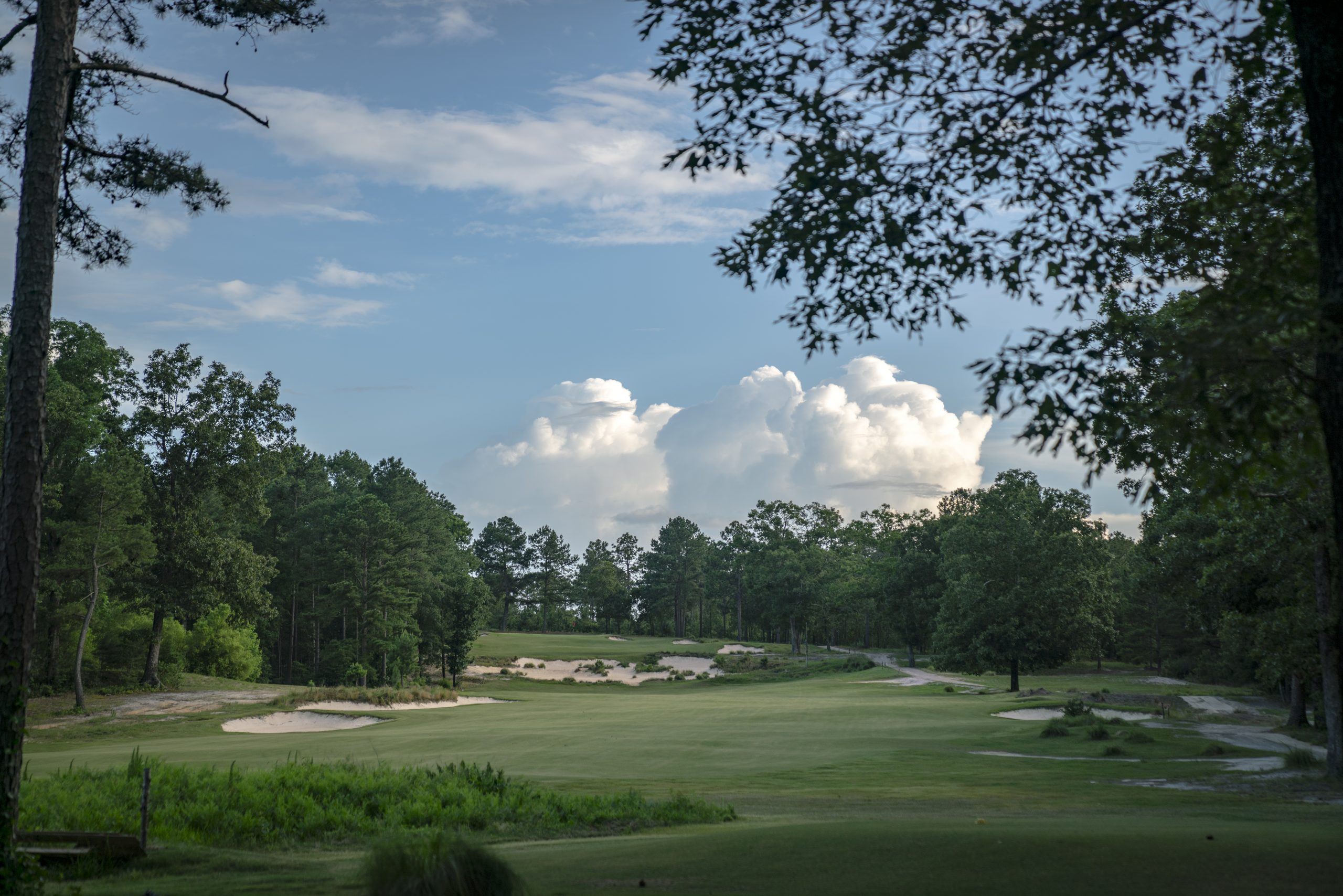 In addition, C&C have narrowed the available landing area for those considering a play to get to the far side of the waste area. Only the select few can contemplate going for the green in two blows. In short — the reward is there for the taking but the risk factor is also front and center too.

For most players the more sensible 2nd shot will be played short of the waste area — leaving a 3rd shot in the range of 90-110 yards.

The approach to the 17th is ably defended — a false front awaits the timid of plays and will quickly inflict pain in pulling back one’s golf ball. The green is 33 yards in depth but sloped perilously on a back-to-front tilt. There is a small cut-out section for a pin position on the right side. There is also a slight back tier area where a devilish pin position can be located. Missing to either side of the green will mean the highest of skills needed with one’s short game. 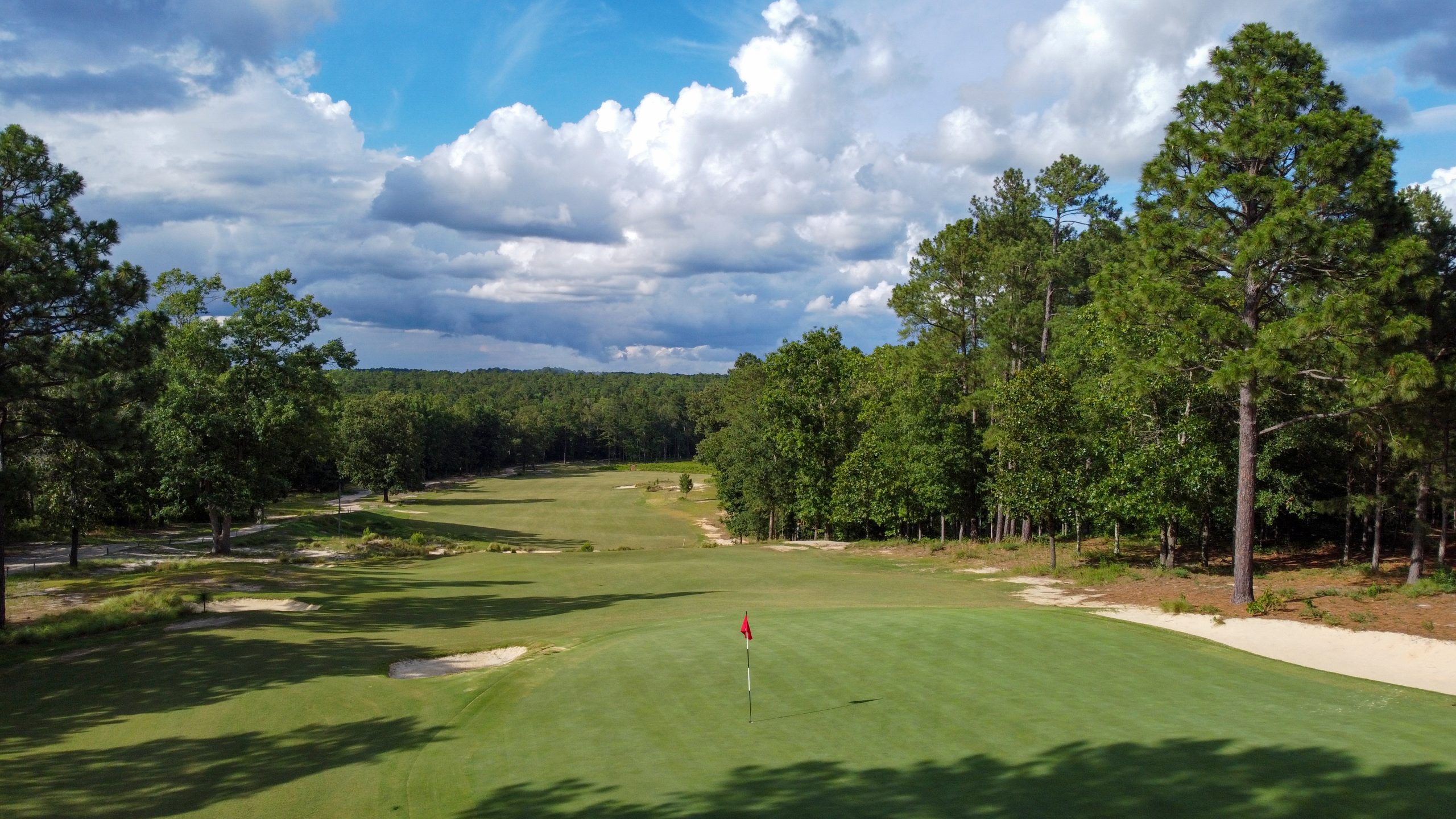 The putting surface at the 17th includes a deceptive false front and there are fall-offs to both sides as well as a rear tier. Gauging one’s approach shot is imperative to get the best outcomes.

In the world of golf — there are great par-5’s occupying the penultimate position. Among the key clubs include Baltusrol Lower in New Jersey, Muirfield in Scotland and Riviera in the greater Los Angeles area, to name just a few.

The 17th at The Dormie Club checks all the key boxes. Eye-catching scenery in concert with strategic calculations of the highest order. Those playing this compelling hole had best realize the stakes involved.

Success can be had but always bear in mind it’s never given away easily.

Photos and rendering courtesy of The Dormie Club