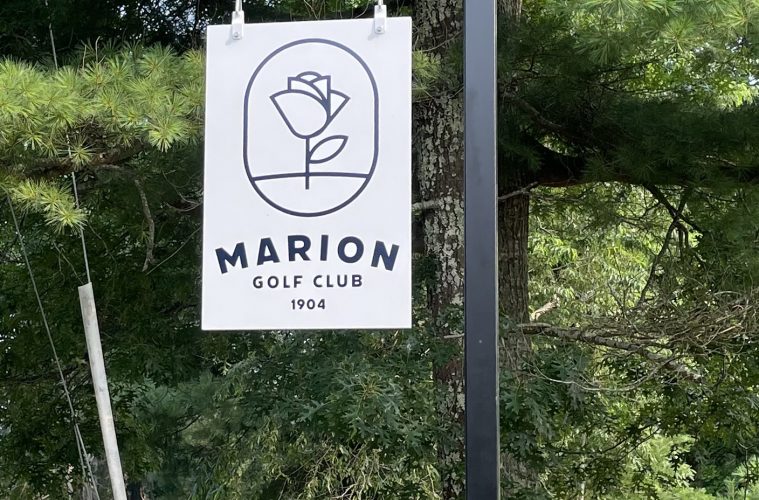 Like finding a once-hit ProV1 in the woods during a search for your own wayward shot, Marion Golf Club is a diamond in the literal rough with nine holes you’ll never forget.

Is it because old stone walls bisect fairways or guard the green on 8 of the 9 holes? Partly. But also, because, no matter your skill level, it’s pure golf enjoyment from start to finish.

With incredible history, and now under the guidance of a trio of golf fanatics who hold a long-term lease on the property, Marion is about to make a big splash on the local golf scene.

Jeremiah Daly and Michael Kane took over operations of MGC in the spring of 2020 and were joined in 2021 by a third partner, Will Fulton. They immediately added irrigation to tees, greens and approaches which are vastly improved. They also implemented a fantastic new logo as a nod to the world-renowned architect who designed the course. More to come on that gentleman.

They not only know the local area as seasonal Marion residents, but are avid players and members of the iconic top 100 private club just up the road (and one of my all-time favorites) – The Kittansett Club.

The relationship between Kittansett and Marion is interesting. While not connected in any way, other than both being located about four miles apart off of Point Road in Marion, the distinguished club may have inspired the reinvigoration of the local 9-hole muni.

Executive/par-3 tracks have become one of the hottest trends in golf course architecture in the last five years. Some of the most recognized golf resorts in the world have added them to challenge and entertain players of all abilities. The Cradle at Pinehurst, Bandon Preserve at Bandon Dunes and the just-opened Nest at Cabot Links are just a few examples. Not to mention the par 3 course golfers drool over during The Masters at Augusta National!

Most of these courses (we can’t speak for Augusta, unfortunately!) are casual, fun, inexpensive and can be played in about an hour or so with just a few clubs. Music playing, drinks in hand, shoes optional and groups of two, four, eight or more are common.

Marion delivers that same laid back, inclusive, unpretentious, untucked vibe, but on a larger scale. At 2695 yards and par 34, you’ll need most of your clubs to get around, but you could also play it with just a hand full of irons.

For an even more “extreme” experience, you can participate in the club’s One Club Championship to truly test your game, patience and creativity!

Some of the most famous golf architects in the world have a left their mark on the New England golf map.

The genius of Donald Ross, most famous for his diabolical greens that repel imperfect golf shots, like those found at Pinehurst #2 and Seminole, can be experienced at Plymouth Country Club, George Wright and Franklin Park among other local options.

While somewhat lesser known, George Thomas is credited with designing the “Big Three of Southern California golf” – and some of the most legendary and exclusive lay-outs on Earth – Los Angeles Country Club, Riviera Country Club and Bel-Air Country Club. You hear analysts rave about the design of Rivera during the PGA Tour’s annual stop at the Genesis Invitational.

Before heading west, however, Thomas actually started designing as a teenager on the east coast and his very first project was Marion Golf Club in 1904.  Walk the grounds today and it still feels like a “first draft” where Thomas sketched out ideas and tested to see what would work.

It’s a wildly entertaining 9-hole loop that’s an easy walk and delivers a wide array of challenges from start to finish.

(Interesting sidebar – Thomas was also a nationally recognized authority on the breeding of roses which inspired the new logo for Marion.)

The first hole looks and feels like a pasture with no clear direction given from the tee box. As you walk out, the hole takes shape with a large tree protecting the right side of the green and bunkers bisecting the fairway before a 20-foot downslope to the green below.

Now that it has your attention, the fun at Marion really begins on the second tee box.

Just play to the green in the distance, just over the road bisecting the fairway, right? Wrong. That’s the 7th green.

The ideal play is about 190-200 yards to the sign in the middle of the fairway telling the player that the second green is a 90-degree angle right. Carry it too far and you’re over the road near the 7th green; Not far enough and you have to contend with a large tree guarding the right half of the green.

Also guarding the green is a large rock wall with just a narrow walkway for foot traffic. And the green itself resembles a large soup bowl that’s been flipped over repelling imperfect shots in all directions.

Despite tipping out under 300 yards, a par four here is a terrific score.

Each hole is memorable and requires you to stand on the tee box and absorb what’s in front of you as it’s likely something you have never experienced on a golf course. Which was precisely Thomas’ objective.

In the book, “Golf Architecture in America: Its Strategy and Construction,” Thomas says “When you play a course and remember each hole, it has individuality and change. If your mind cannot recall the exact sequence of the holes, that course lacks the great assets of originality and diversity.”

Holes 4-7 that run parallel out in the pasture, each split by rock wall-based mounds bisecting the fairways and framed by large chocolate drop mounds. Some greens are pitched, some are flat but all roll beautifully.

Behind the 6th green is a peek at Sippican Harbor, the same harbor that helps frame the Kittansett Club up the road.

And maybe the best part of the experience? It’s a day’s worth of golf euphoria that can be completed in just over one hour.

While the new management team aspires to work with an architect to return more of George Thomas’ original design, you should experience Marion as it exists today before the crowds start lining up.

While this may be the first you’re hearing about Marion, it certainly won’t be the last.

For comments on this article or suggestions for the next one, you can contact Chris at cmgarrett19@outlook.com.