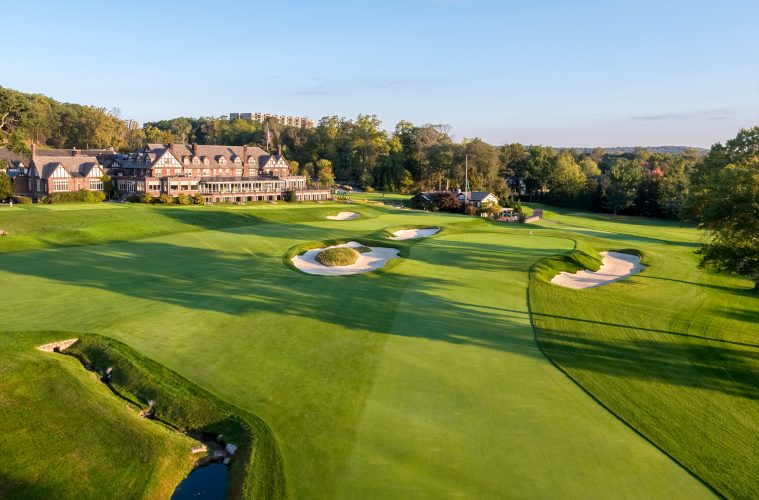 The hiring of Gil Hanse in 2018 to do a complete overhaul of the Lower Course was meant to bring back to life the design elements of the Tillinghast design. The reopening this year clearly is an achievement for the storied club.

Without saying so publicly — if one is keen to read between the lines — there is no question the club was not entirely enthused with the past contributions of Robert Trent Jones, Sr. and in later years via his son Rees. Clearly, a club of Baltusrol’s stature — does not go the extra yard in getting Hanse’s involvement and in ponying up a $12+ million budget if all was well with the Lower Course.

Most recent updating by Gil Hanse (2020)

The design fingerprints from both Trent and Rees added to the Lower have now been removed. In a statement released by Baltusrol — “the club wanted to return it (Lower Course) to the purity of the Tillinghast design. One can only fairly surmise the Jones contributions were not in alignment with the stated goal of “purity.” 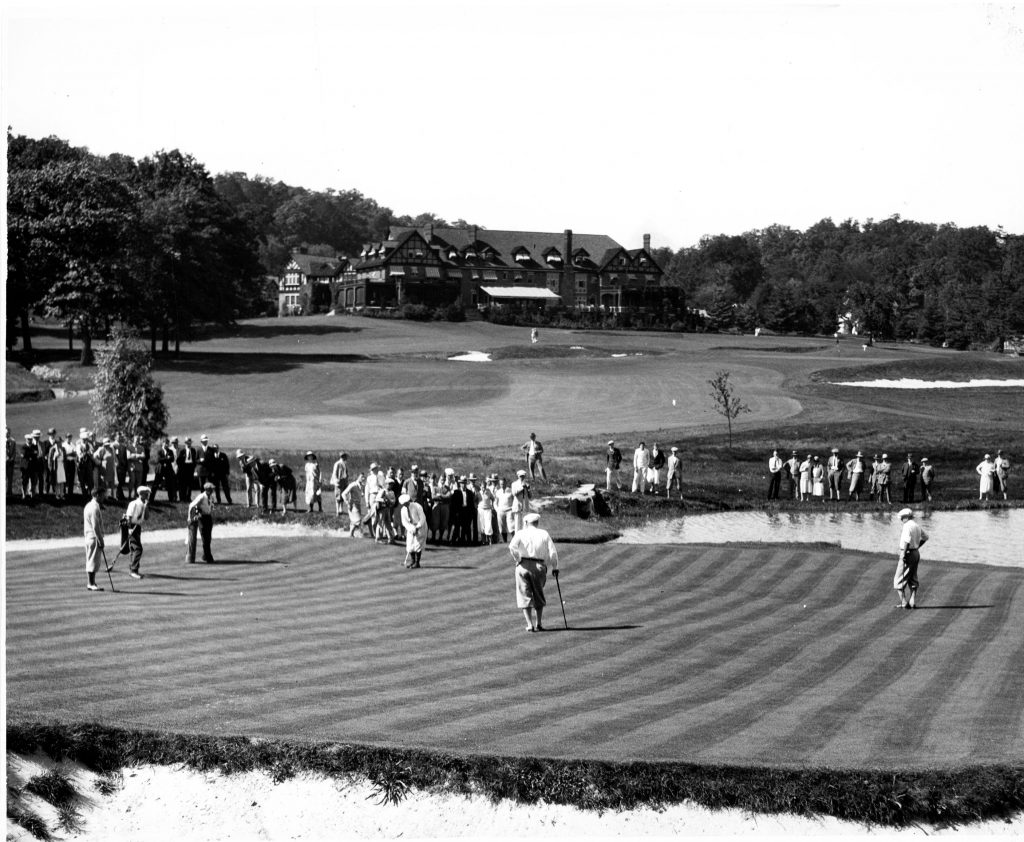 Is the Lower a better course architecturally because of what Hanse has done?

Yes — it is. But the outcome is akin to a house that remains on the same foundation — albeit with the furniture that’s inside being put back into an original position whenever possible. Hanse has excelled in past updates of other courses and his work at the Lower did bring a more unified dimension with a clear emphasis on the actual Tillinghast style.

Credit Hanse for not overwhelming the site with his own fingerprints. He also stated publicly his goal was to bring back to life the Tillinghast vision and not have his name added to the scorecard to highlight his involvement. Such a desire to remain in the background was a big reason why Gil and his talented team were selected in the first place. 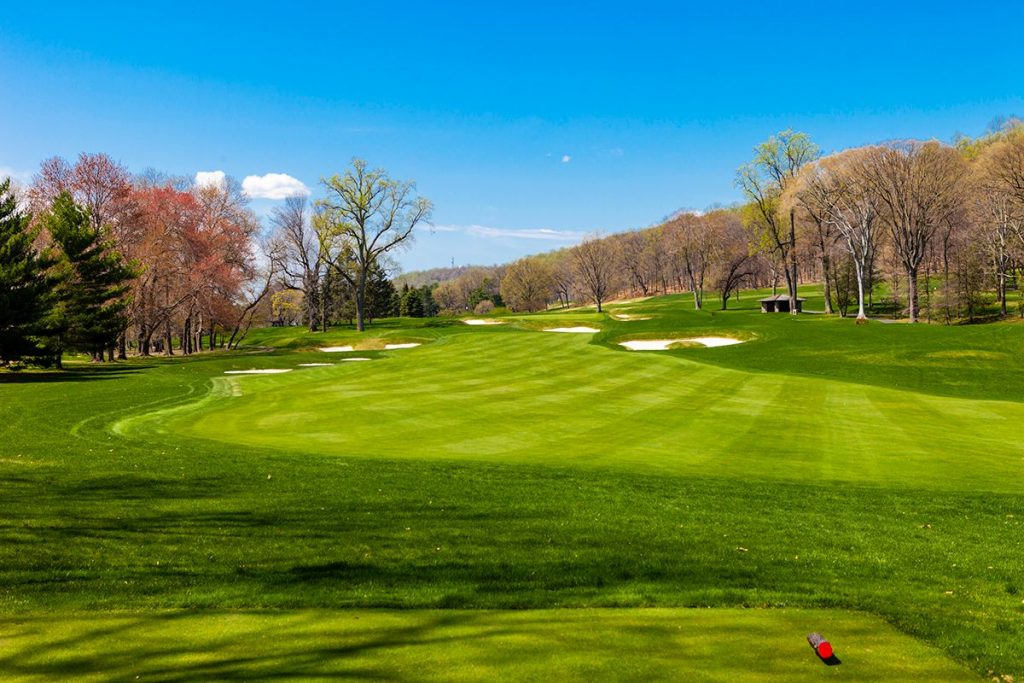 The par-4 5th has been fortified by fairway bunkers in the drive zone.

The renowned par-3 4th has benefited with a more natural appearance. Previously placed flower plantings behind the green – were removed — thankfully The wispy grass one sees from the tee is certainly striking. The putting surface has also been expanded so various pin locations can be used — most notably in the far-right lower corner of the green. When combined with the preceding rigors of the long par-4 3rd you have a quality one-two early round punch.

Bunkers were added at the 2nd and 5th holes and both clearly benefited. The 5th is one of the more underrated holes on the Lower with its daunting false front awaiting the half-hearted approach and pulling it backwards off the green.

Overall, the bunkers highlight a lower profile but have kept their depth. There is also the inclusion of long grass “eyebrows,” giving bunkers a retro look. There are also ramp approaches to greens which have been opened. Centerline approach bunkers — at the 7th and 18th hole were removed. The re-establishment of a ground game option is now a viable strategy — something Tillinghast clearly advocated. 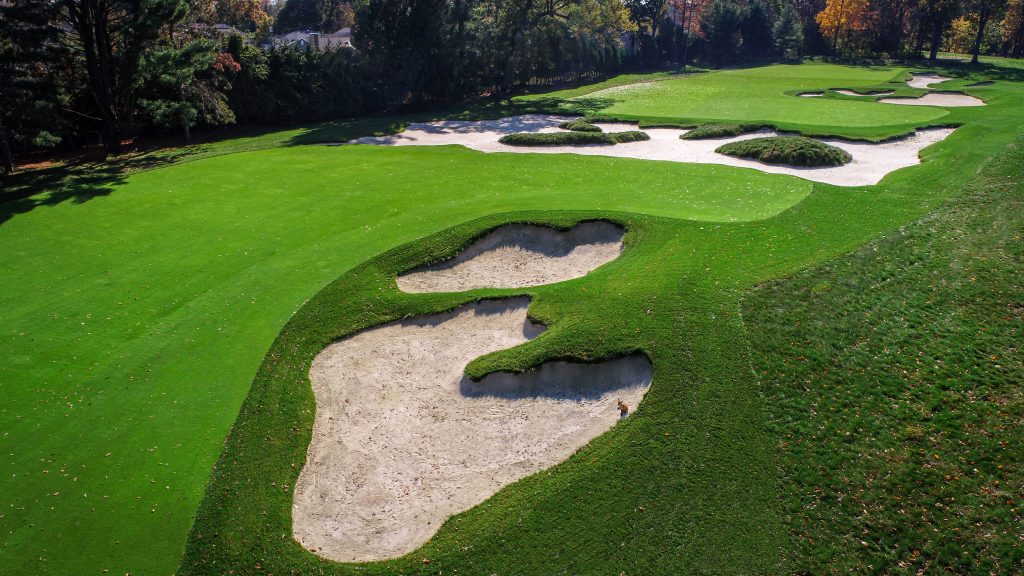 The uphill par-4 2nd has been updated to reflect the Tillinghast design.

Hanse also added diversity in how the fairways are cut. Gone are the straight razor mowing lines — placing players on notice that securing the ideal line of play requires more thought and sounder execution than previously. This is especially the case with the more visually striking par-5 7th — which plays as a long par-4 for men’s major events.

The main anchor that remains is the dullness of the property for the final holes on the outward half and a few that start the inward side. Hanse admitted as much during his press conference that kicked-off the Lower’s reopening and fellow architect Tom Doak said similarly in his review of the course via his updated “Confidential Guide to Golf Courses.”

The par-4 8th was enhanced but the Lower still lacks a stellar world class short par-4. The angle of the green and the manner by which it is protected is a positive step though. But the 8th cannot overcome the flatness of the land the hole occupies. The par-3 9th is also a capable hole but remains lacking in lasting memorability. The par-4s that come in succession at the 10th and 11th are good holes but when held against the likes of other solid two-hot holes that Tillie created at his upper echelon deigns they are merely functional — not spellbinding. The same applies to the par-3 12th — although the fall-away green is bolstered by a myriad of internal green contours 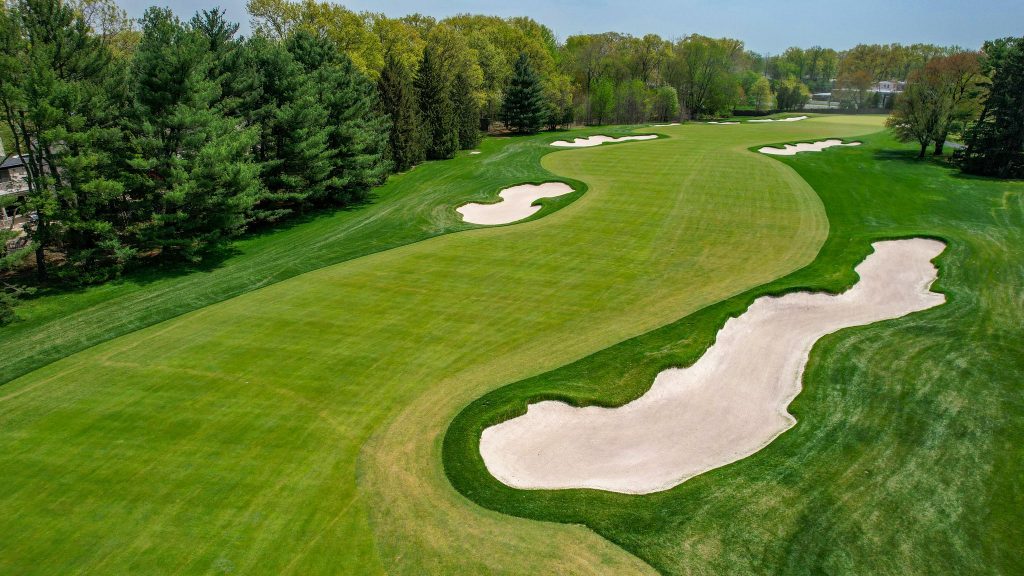 Matters improve when you reach the par-4 13th hole. The hole was wisely extended to 470 yards and now a tee shot must be well struck in order to make the longer carry up the right side. Often times, when holes are lengthened, they are not more interesting but just longer. In this case — the 13th plays far better and is alignment with the length today’s drivers and golf balls can achieve.

The par-4 14th does not really add much to the Lower — even with the involvement of Hanse. That’s not the case with the stellar par-4 15th. The fairway area has been reinforced with deftly placed bunkers in the drive zone and the approach into the elevated green is one of the best faced during the round.

The par-3 16th is a longish hole at 230 yards and Hanse smartly expanded the green. Interestingly, the chip-in 1993 U.S. Open winner Lee Janzen made on this hole in the final round i no longer possible because that area is now part of the “new” putting green. Overall, the Lower has seen a 20% gain in putting green size. This has helped with additional pin placements. 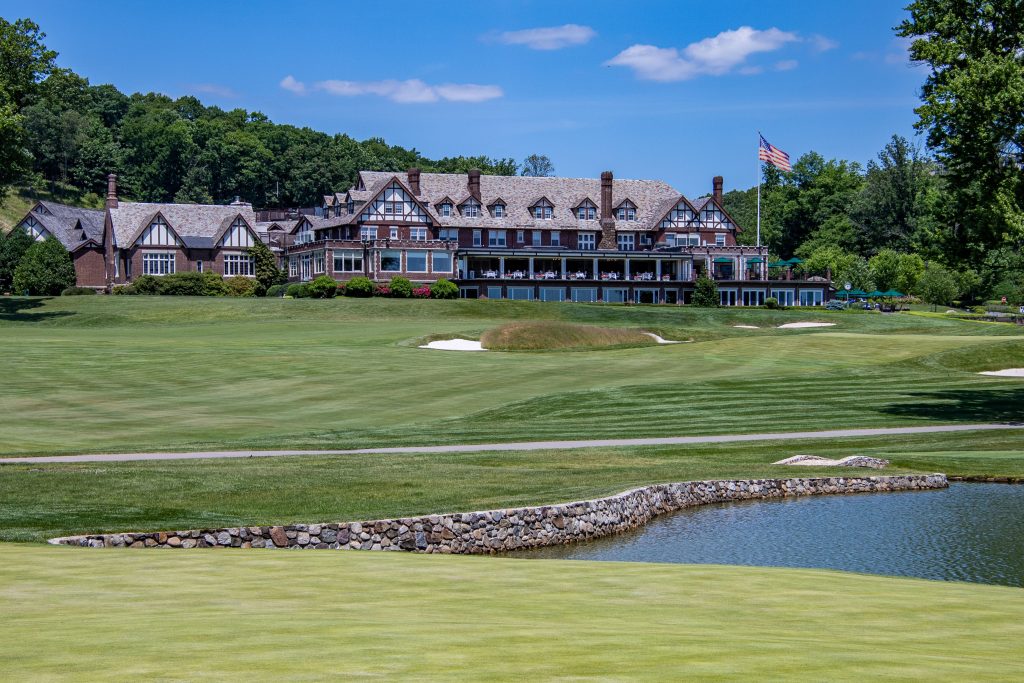 Looking back at the Baltusrol clubhouse from the 4th green on the Lower Course.

The Lower is noted for ending with two par-5 holes and Hanse played a big-time role in strengthening these holes tactically as well as the visual look. The 17th used to have a pine trees crowding the driving lane when the hole is played from the tips. They no longer exist — good. The “new” 17th can stretch out to 667 yards.

A crucial decision was made to move the existing Sahara bunker that cuts-off the fairway into two sections — brilliantly relocating it 40 yards further down the fairway. Hanse and his gifted shapers also created an internal area within the Sahara bunker beautiful to look at but maddeningly difficult to play from. The club does rake the bunker once a week but after that it’s up to the players to smooth footprints with a club or foot or both. In sum — balls finding the mega-sized bunker can get any number of challenging lies to overcome. While the sand area is not akin to Pine Valley’s 7th with its devilish Hell’s Half Acre the net result of what’s present now is a major plus.

The finishing hole has also been lengthened to 573 yards and its overall design helped considerably by clearing of excessive trees and underbrush. Over the course of time, this intrusion had overwhelmed the natural beauty of the hole. 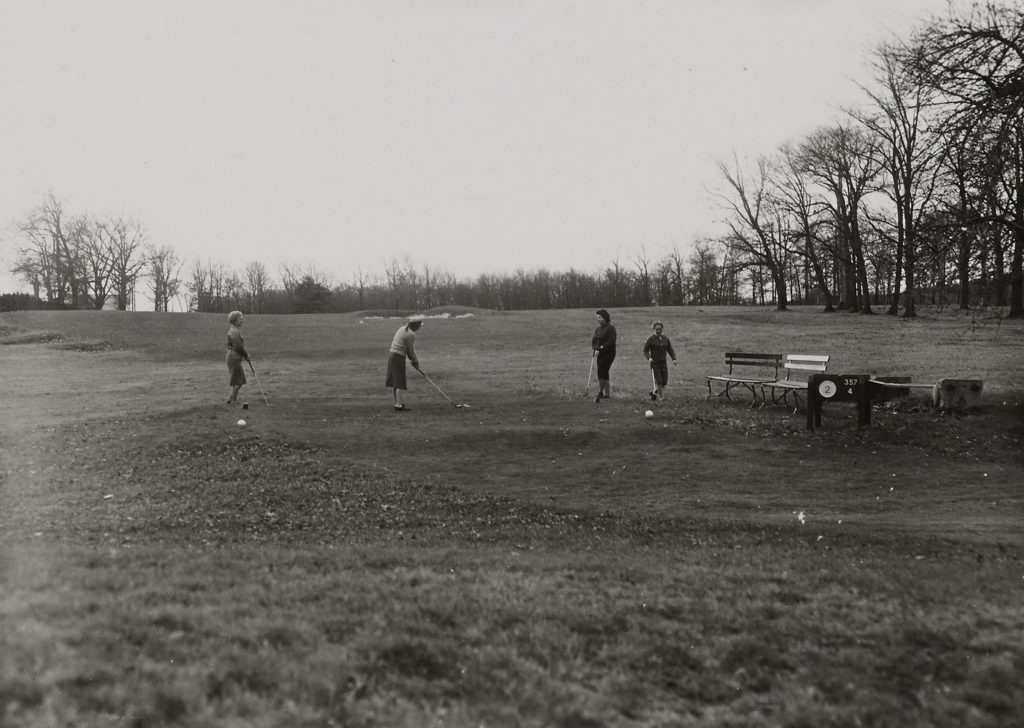 Interestingly, when you stand on the outdoor patio and overlook the Lower the expansive views are now in full view. The land forms really come to life — not straightjacketed by trees and other intrusive elements. The inherent character of the Lower that Tillinghast originally envisioned has now come out of the shadows and benefits accordingly.

The Lower also does not have a “second cut” — you have fairway and then the primary rough. The rough is also exactly what the word implies. Frankly, having excessive rough is immobilizing for the broader range of golfers but the club was adamant in its marching orders to provide championship type conditions on a daily basis.

From the championship tees, he Lower now is over 7,400 yards as a par-70 when major events are played. The 1st and 7th holes, par-5s for the membership, become long two-shot holes. 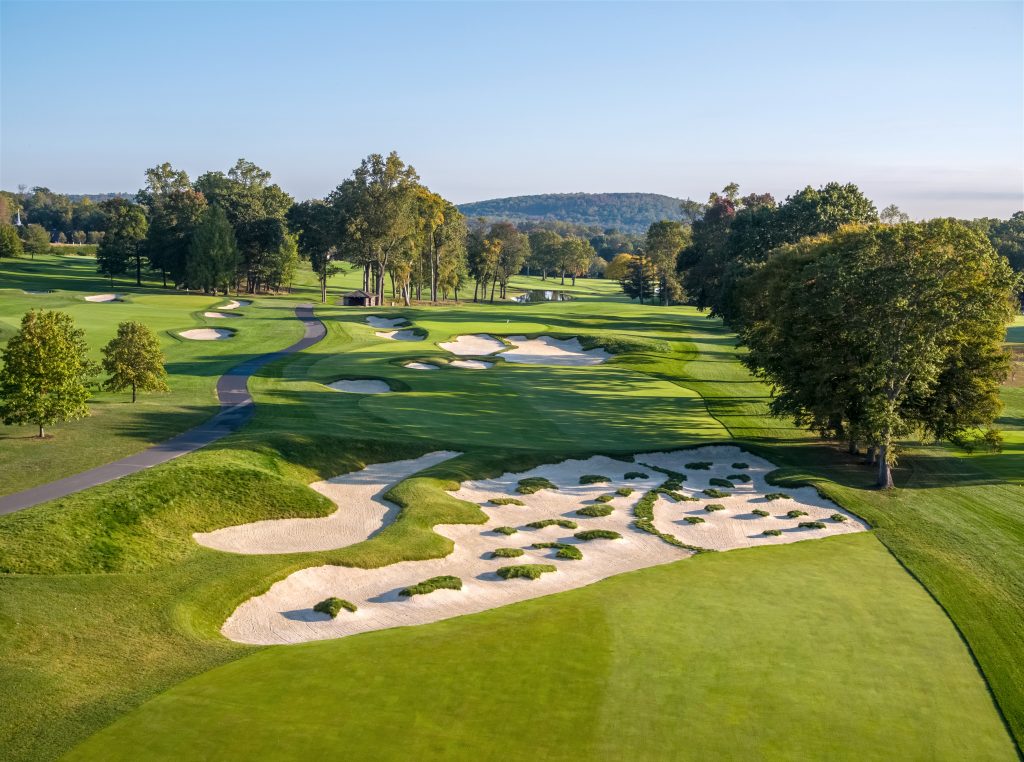 The famed “Sahara” at the par-5 17th on the Lower. Hanse smartly repositioned the bunker further down the fairway and the bunker complex is only raked once per week.

Baltusrol has seen much golf history over the years and the club’s desire to stay engaged at the highest of levels remains front and center. The Lower resurfaces on the tournament scene when the club hosts the ’23 KPMG Women’s PGA Championship. Six years later the PGA Championship returns for a 3rd time. Unresolved is when – or even if — an 8th U.S. Open returns to Baltusrol.

The Hanse involvement has unified the architecture, so the Tillinghast connection is now the rightful headliner. The Lower still does not engender deep-seated rapture when measured against other elite designs Tillie created. It will be most interesting to see how Hanse fares when updating the sister Upper Course in 2024. However, Baltusrol wisely chose the most sought-after architect to rejuvenate a layout that needed such a comprehensive effort.

Baltusrol is indeed not looking back — full speed ahead.

The 18th on the Lower with Baltusrol’s majestic clubhouse in the nearby distance.

*Only if you must